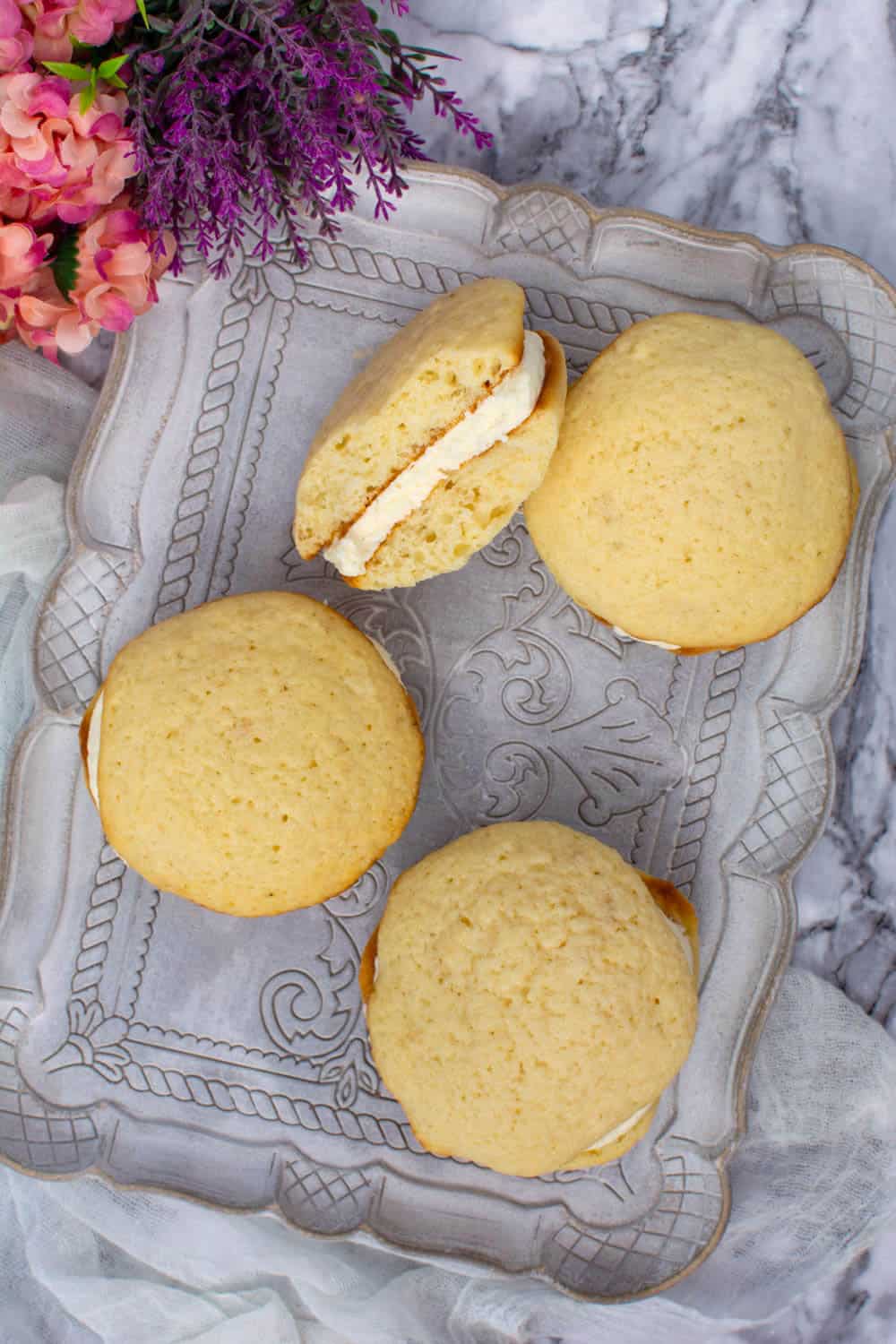 Whoopie pies are quite famous, and this dessert comes with a long history – but also a few different origin stories. Whoopie pies are popular across the U.S. but they are especially a favorite dessert in the northeastern part of the country.

Some say Americans’ beloved whoopie pies descend from the cream filled sandwich cakes popular in Europe during the Victorian era. They found their way over the ocean and settled in the States.

But the long history of whoopie pies in Amish country and the eastern part of the country make either a Pennsylvanian Amish or a New England (Massachusetts) beginning more likely.

Either way, these cakey marshmallow sandwiches are soft, sweet and oh-so-satisfying. That’s why I had to make some!

But these whoopie pies have a bit of a twist – the light yet rich aroma and flavor of vanilla to match the ooey-gooey marshmallow filling.

Whether you love whoopie pies, marshmallows, or both, you have to try this recipe. Don’t worry – it’s not so difficult!

So let’s get started!

What Are Whoopie Pies?

Whoopie pies are a sweet treat, made from two flat-mound pieces of cake, about the size of a hamburger, with whipped frosting in between.

Some people say they were first made by Amish as a way to use extra batter left from the cakes.

The filling can be a wide range of things, but it should be stiff enough to keep those cake pieces together. Many recipes call for shortening or marshmallow fluff in the recipes. In fact, marshmallow fluff seems to be the most traditional.

Traditional whoopie pies are made of chocolate with a white filling. These are delicious, but why not to make something new and enjoy vanilla whoopie pies?

Which is the ‘Real’ Whoopie Pie?

Perhaps you did not know, but there are different versions of the whoopie pie, especially between Maine and Pennsylvania whoopie pies.

Deviating from one region’s traditional ingredients, like adding marshmallow fluff or not, is grounds for a kitchen fight!

If you travel to Lancaster, Pennsylvania, they will say that their whoopies, as their “ancestors” made them, are the only original. Their especially cake-like whoopies were originally made from leftover batter and shortening.

Elsewhere, the whoopie pies are a close relative to Moon pies and a sibling to the fluffernutter sandwich.

Maine whoopie pies are also like cakes, and they tend to use marshmallow fluff in the filling, although a whoopee pie has evolved a lot from its chocolate and cream beginnings.

I don’t know which is the original, but in my opinion, every one is pretty great!

This vanilla whoopie pie recipe is made with delicious marshmallow fluff.

Marshmallow fluff or marshmallow cream is everything we love about marshmallows. It is in a semi-liquid form, creamy, soft and pairs with a variety of flavors like chocolate, peanut butter, lemon, banana, pumpkin spice, etc.

Marshmallow fluff is basically a mix of marshmallows, cream of tartar, egg whites and sugar. You can find these in most stores.

I usually find them in the local store, but when making this recipe, I was too lazy to go out. So, I made my own marshmallow fluff, with only two ingredients: marshmallows and corn syrup.

How to Make Your Own Marshmallow Fluff

If you ever get stuck in this lazy situation, you can easily make your own marshmallow fluff with hardly any ingredients.

You will only need: 2 cups of marshmallows and 2 tablespoons of corn syrup.

Here’s how to whip up a quick marshmallow fluff:

Be ready to use this immediately, adding it to butter and whisking until you have a smooth and fluffy mixture. I suggest this to be a last part of making a buttery marshmallow fluff.

You can also increase the marshmallows to 4 cups, and 4 tbsp of corn syrup if you are trying to double this recipe.

Getting the Perfect Whoopie Pie Shape

The batter of whoopie pies is soft and tends to spread out easily. Sometimes, this spread is not perfect, but you can fix it.

Once your whoopie pie base is baked, remove it from the oven and immediately press gently with fingers to get that nice round shape.

My special trick is to use a large cookie cutter, place it around the whoopie pies and just shake them for few seconds. It really improves the whoopie pie appearance.

This is not a mandatory step – because who cares about the looks, when the taste is so good? – but it is nice to have.

You should keep in mind that the cake will be hot, however. So be careful when handling them if you are going to cut them into shape.

Another thing you can use are whoopie pie molds. They look like muffin trays, just with larger and more shallow cavities. I have even used plain donut silicone trays with a quite happy results.

Can I Make Whoopie Pies Smaller?

But what if you don’t actually want a whole whoopie pie? Can you make them a little more personal-sized?

Yes, you can make smaller, even bite-size whoopie pies like a quick delicious snack. But keep in mind that in that case you will need to adjust your baking time. Less batter in one spot means less baking.

Now that we’ve covered the basics, let’s get to the fun part – making some vanilla whoopie pie beauties!

How To Make This Vanilla Whoopie Pie Recipe

In a mixing bowl, beat butter and sugar until pale.

Add the egg and vanilla.

Add flour, baking powder and milk little by little and alternating each until total amount is used and the mixture has been whisked to a smooth batter.

Bake the whoopie pies for 15 minutes. Re-shape the cakes while still hot.

Make the filling: In a mixing  bowl, beat butter, vanilla, and sugar until fluffy.

Fold in marshmallow fluff and salt.

Assemble pies: Spoon the filling over six of the now cooled whoopie pie cakes. Close the pies like a sandwich with the remaining cakes.

For the Marshmallow Fluff:

In case you need to make your own marshmallow fluff:

You can also increase the marshmallows to 4 cups, and 4 tbsp of corn syrup to double the recipe.