Home Cooking Tips Can You Use Charcoal in A Wood-Fired Pizza Oven?
Cooking Tips

Can You Use Charcoal in A Wood-Fired Pizza Oven? 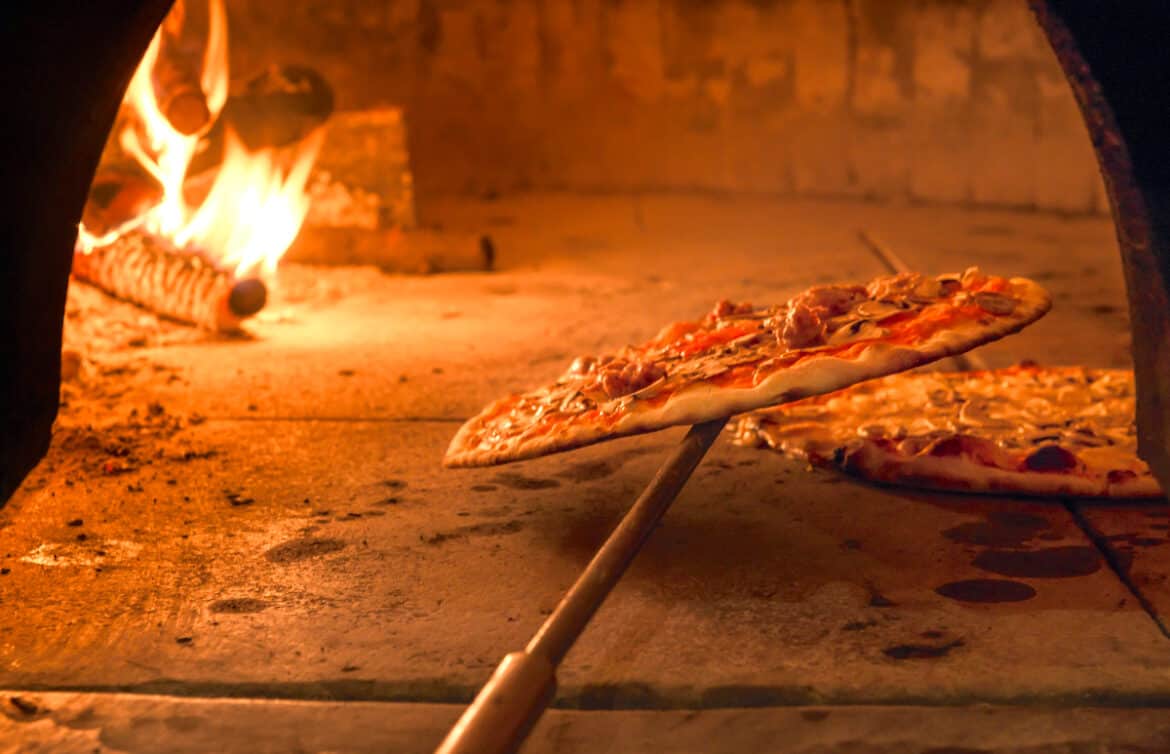 Traditionally, pizzas have been cooked in wood-fired pizza ovens since the 18th century, but there have also been many variations when it comes to the fuel used to make these delicious pies.

Neapolitan pizzas are perhaps the best examples of classic wood-fired pizzas. They are cooked fast and at high heat to achieve a combination of tenderness and crispiness.

But can you use charcoal in a wood-fired pizza oven? The short answer is yes, you can use any type of fuel to generate heat and cook pizza, but you will need to keep a few things in mind such as the flavor, heat, and smoke generated by the coals.

Read below to learn more about properly using coal in pizza ovens and a few important precautions that you need to be wary of when using an alternate fuel.

Generally speaking, wood ovens produce not just the right amount of heat but also a faint aroma and a distinct flavor to the pies.

Wood-fired ovens are perfect for quickly cooking pizzas, as they cook raw dough within minutes – which makes them ideal for commercial use.

These ovens can usually be found in many restaurants and there are now even brands that offer miniaturized wood or gas-fueled portable pizza ovens too.

Wood pizza ovens are typically large and can accommodate many pies in one go but they can vary in shape and size.

For example, a dome design may be able to generate and dissipate heat more evenly than a rectangular oven.

Every pizzeria has its own techniques which make their pies stand out. Some may even use different types of wood to enhance the flavor of the pizza.

These hardwoods (and more) are traditionally used to fuel ovens:

These types of wood are mostly free of impurities and burn slow, which means that manufacturers don’t have to pile them up or increase their expenditure by constantly burning a cord (128 cubic feet) of wood in every cooking session.

As mentioned, these types of wood can also impart a distinct flavor to the pizza as it cooks which makes them crucial in coming up with better and unique tasting pizzas.

Wood-fired ovens work by first placing the wood in piles inside the oven. A log may be taken from the pile and used as a starter.

This starter log is set aflame and placed between the pile of wood. A fan may be used to slowly blow air over the pile to get the fire going.

Alternatively, liquid fuel or even hard coal may also be used to light the initial pile of wood.

This practice isn’t recommended, as it may impart an aroma in the oven and even affect the flavor of the wood – a little patience goes a long way when using a wood fire oven.

Once the pile has been lit, the wood may be set aside using a specialized utensil. Additional wood may also be added at this point until the oven reaches the right temperature.

Typically speaking, a wood fire oven can take about 45 minutes to heat the oven and reach temperatures of about 650-800°F.

The oven may also be fitted with a chimney or a controlled exhaust that can be used to blow away the excess carbon-based ash or lower the heat of the oven.

Once the oven is heated, additional wood can be added periodically to keep the temperature stable.

How Do Coal Fueled Ovens Compare?

Coal, of course, has different characteristics than wood. It generates more heat and can also be full of impurities.

If we are strictly talking about cooking pizzas in an emergency, then yes, you can use any heat source to cook a pizza but the flavor, look, and aroma will be different than what would come out of a wood-fired oven.

It may not be a good idea to use regular run-of-the-mill coals to cook pizzas, as they will produce way more smoke and ash. This may impart too strong a flavor to the pizza as well.

This is why many manufacturers will use different types of coal to fuel their ovens.

What Kind Of Coal Should You Use?

Regular coal is known to produce not just a lot of smoke but also toxic fumes that may cause harm over time. These cheaper coals also burn out quickly and produce a lot of residue or ash which may contaminate the pies as well.

If you are going to use coal to cook pizza, then we recommend that you go with any high-quality hard coal.

For example, anthracite coal is a type of hard coal that burns slower, produces less smoke, and has very few impurities compared to regular coal.

This type of coal is commercially used in many coal-fired ovens and can reach temperatures of around 800-1000°F in about an hour. Coal ovens usually have a dome shape so that the heat is distributed evenly across the oven.

The difference, though, is that these coals do not produce an open flame. Rather, they provide a higher stable temperature that may cook the pizza within minutes but may not char them like wood-fired ovens.

Also, while some people may not be able to tell the difference between wood-fired and coal-fired ovens, there are some that swear by each when it comes to the flavor, texture, and aroma of the pizza.

This is why it is important that you use the highest-quality coal available if you do plan to cook pizza using a coal-fired oven.

Additionally, coal-fired ovens are also operated a bit differently. Here’s a quick chart to explain the difference between both these fuels.

How To Cook Using A Coal Fired Oven

The coals are first ignited and then distributed evenly in a single layer across the base of the oven.

Once the coals are sufficiently lit and the oven has reached the right temperature, the coals are then cast aside in either direction and the excess ash is blown away to clear the cooking surface of the oven.

This technique allows for not just the oven to reach the desired temperature quickly but also prepares the base of the oven so that the bottom of the pie cooks evenly too.

Once everything is in order, the pies are inserted and cooked within minutes due to the high heat.

The pizza chef may also pick up the pie using special utensils and bring it closer to the coal so that it chars the same way as in a wood-fired oven.

Anthracite coal burns slower than regular coals which allows them to be used for prolonged cooking sessions.

They also generate less smoke and fewer impurities. They may also be considered to be a safer alternative in terms of the fumes generated by the burning coals.

A motorized fan can also be placed near the air inlet to increase the temperature or remove excess ash from the coals.

Regardless of what fuel you use, make sure that you have proper ventilation when using either coal or wood. Coal ovens should be regularly cleaned so that there is as little residue or ash as possible after each cooking session.

Woodfire ovens are the classical approach when it comes to making pizza. The type of wood used in these ovens plays a huge role in how the pizza looks, tastes, and smells.

Coal-fired ovens may not be recommended but are used commercially by many pizzerias because they offer better heat distribution and may even burn slower than wood in some cases.

However, not every coal is made the same, which is why if you are going to cook in a coal oven, you should always go for high-quality hard coals.

These coals burn slower, have fewer impurities, and will produce less smoke. Remember, the main advantage that coal ovens have over wood ovens is that they generate more heat while using less fuel.

Typically, a wood-fired oven would reach about 650-850°F while coal ovens can reach 800-1000°F, which means that you can cook pizzas quicker but you may need to adjust the cooking technique to get the same char on pizzas in coal-fired ovens.

Here are a few questions that you may have in mind after going through the differences between wood and coal-fired ovens.

Can a mixture of hard coal and wood be used in a pizza oven?

Yes, you may use a mixture of both fuels but it would be redundant to use both at the same time. In case of emergencies when you have insufficient quantities of both, then yes, you may use both to fuel the oven.

Are coals more readily available than wood for pizza ovens?

In some regions, the availability of coal is more prevalent and easily accessible than wood, which may require some type of labor.

Even if you can secure a cord (a measurement of wood, defined as 128 cubic feet) you may still have to manually chop the wood to fit the oven, whereas coal has no such prerequisite.

What type of fuel would be better for a makeshift indoor oven?

Do not use wood or coal indoors without proper ventilation. These ovens can reach extremely high temperatures, which may make them unsuitable for indoor use.

Always check with an expert before attempting to use any sort of fuel indoors.

Up Next: Best Pizza Oven Brushes

Does All Caesar Dressing Have Anchovies?

Best Sauces And Seasonings For Pierogies

How Long Is Pulled Pork Good For?

How To Serve Caviar Appetizers

Can You Put Hot Chicken In The Fridge?