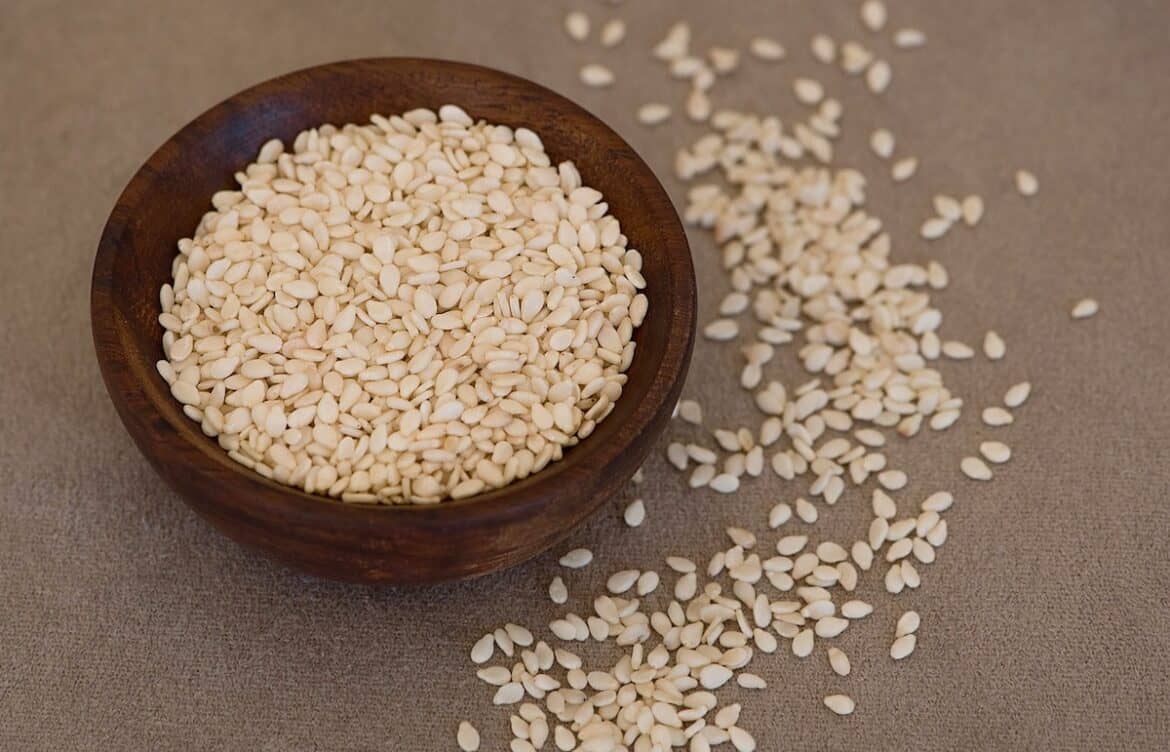 Sesame seeds are a surprisingly common ingredient for such a small seed and relatively subtle flavor profile. In fact, the sesame flavor many people associate with the seed is more likely to come from the extracted oil of the seed, which is where a lot of the flavor-rich compounds can be found.

In most kitchens, you’ll find a spice jar or two filled with either white or black sesame seeds. Some kitchens will include both, and we hope that this guide gives you a few more reasons to keep sesame seeds (and their substitutes) on hand.

However, there are plenty of reasons why you might need to substitute sesame seeds out for another, similar, ingredient. Everything from sesame allergies to running out of the seeds in the middle of a complicated recipe.

This guide will discuss the uses and flavors of sesame seeds in-depth to help you choose the right substitute for the use you need, followed by the substitutes. We’ll also discuss which substitutes work best for which kinds of cooking so that you can pick the right ingredient for the right dish.

Before we get into the substitutes themselves, let’s talk about the sesame seeds that are being replaced. Sesame seeds are a medium-small seed that has a rich flavor in large quantities, but that is very subtle in smaller amounts.

Sesame seeds have a rich umami flavor, so they are commonly used in savory dishes as a way to increase the richness of taste.

Sesame seeds are often commonly used as a garnish, adding another textural element to breaded and sauced chicken, a little crunch to rice and stir fry, or on the outside of pastries for decoration.

Many people don’t realize that sesame seeds are the principal ingredient in tahini, which can be used to make hummus, or as a flavoring or sauce ingredient in a wide variety of Middle Eastern dishes.

While sesame is mostly a savory flavor, it’s also been used in sweet dishes and as a paired flavor with red bean paste.

Unfortunately, many people think that there aren’t good substitutes for sesame seeds, which isn’t true! What is true is that you have to look to slightly different ingredients to replace sesame seeds since they are a relatively unique ingredient.

When substituting sesame seeds, it’s important to consider the purpose they are meant to serve in the dish you’re preparing:

The 5 Best Substitutes For Sesame Seeds

With sesame seeds, you need to keep in mind that no seeds or nuts are going to quite have the same flavor or texture. Sesame is a very distinctive ingredient, so if you’re looking for a perfect match you might be disappointed by the most common substitutions.

However, if you’re working around an allergy, ran out, or are looking for some alternatively just in case, these options will have you covered.

What we mean is that the different colors and preparations of sesame seeds are relatively interchangeable.

Sesame seeds come in white and black colors. The biggest difference between the varieties is whether the seeds have been hulled.

When it comes to the texture and look of sesame seeds, poppy seeds are probably your best replacement. Sesame seeds are also the best substitute for poppy seeds.

They are the closest match for black sesame seeds and work best as a substitute where the sesame seeds were used primarily for decorative or textural purposes.

Poppy seeds also have a similar taste profile to sesame seeds. They are a slightly nutty seed and are protein and fiber-rich.

However, poppy seeds tend to be slightly more bitter than sesame seeds and don’t have the same umami taste that roasted sesame seeds do.

Poppy seeds are significantly smaller than sesame seeds as well, so you’ll need more of them for the same texture and taste impact.

Our favorite poppy seeds are offered by McCormick.

Hemp seeds are still a little harder to find, but they might actually be a closer flavor and texture match for sesame seeds than poppy seeds.

Basically, anything you could comfortably substitute with poppy seeds, you can do with hemp seeds.

That makes hemp seeds one of the more versatile options, suitable for a wide range of traditional Asian and Middle Eastern dishes as well a good choice for European garnishes and baking.

However, like the other substitutes, they won’t look or taste right in sushi and are mediocre as a rice garnish for simpler rice dishes.

Our family always purchases these hemp seeds. (You can usually find them at Costco too, depending on where you live.)

Flax seeds aren’t as good of a substitute as poppy seeds in several respects. For one thing, they are larger than sesame seeds, with a firmer, chewier, texture.

They also don’t match color very well, generally coming in a tan to brownish color. Whole flax seeds can be slightly nutty like sesame seeds, they don’t have the same sweetness or umami.

However, flax seeds are protein and fiber-rich, and a good option when you’re looking for something to provide texture. The texture is different than sesame, but that isn’t always a bad thing.

Flax seeds work best in baking, salads, and some saucy savory dishes. They aren’t a substitute for tahini, sesame oil, and generally aren’t a good substitute for sesame in things like sushi rice.

If you want to benefit from the nutritional value of flax seeds, you should grind them slightly before use. Flax seeds have a protective coating that makes them difficult to digest whole.

Another seed alternative to sesame is sunflower seeds. Sunflower seeds have a few drawbacks though. They are significantly larger than sesame seeds in all dimensions.

Unlike sesame and flax seeds, which are relatively flat, sunflower seeds are more oval in shape.

Sunflower seeds can also be harder to find unsalted, which is important if you want to replace sesame seeds without having to change the seasoning in your dish.

Terrasoul pulls through once again with these raw and shelled sunflower seeds.

Omitting some salt is fairly simple, but you can end up with far too much salt if you use salted sunflower seeds and forget to reduce other sodium sources.

Sunflower seeds also have a flavor that is similar to sesame, but very distinct. They’ve got good umami and might be the most similar to any of these substitutes in that sense, but they aren’t as nutty and are slightly sweeter.

Sunflower seeds are best as a substitute for sesame seeds in baking recipes, salads, and occasionally as a garnish or topping for stir fry and similar savory dishes.

While you can use them as a substitute in rice, the flavor isn’t all that similar and they aren’t suitable for some things like rice balls and sushi, which commonly include sesame.

We’ve talked about some of the best uses for sesame seeds, and several of the best substitutes out there. Hopefully, if you ever find yourself in a pinch, you have one of these alternatives on hand.

For dishes where sesame flavor is important, but you don’t have a direct substitute available, a small amount of tahini or sesame oil can also help.

Each of these substitutes has different pros and cons, so consider experimenting with which to use in your favorite dishes, especially if you’re omitting sesame seeds thanks to an allergy and need permanent replacements.

Should You Always Grind Your Seeds?

Some people think that all seeds should be ground, or at least cracked, before eating. That’s because it helps you fully digest the seed, letting you access its full nutrient potential.

While it’s true that grinding or cracking seeds does increase some seeds’ nutrient profile, it isn’t necessary. Seeds are a good addition to your diet whether they’ve been cracked or not.

What Flavors Does Sesame Go Best With?

Sesame is a remarkably versatile flavor. But western palates tend to prefer sesame as an umami booster in savory dishes and to be less fond of sesame in sweet items.

Sesame also pairs excellently with chicken and fish flavors, and as a compliment to acidic fresh vegetables like you see in sushi.

It’s also been used as a flavoring in fermented vegetables and pickles, notably kimchi.