The Best Substitute For Oyster Sauce 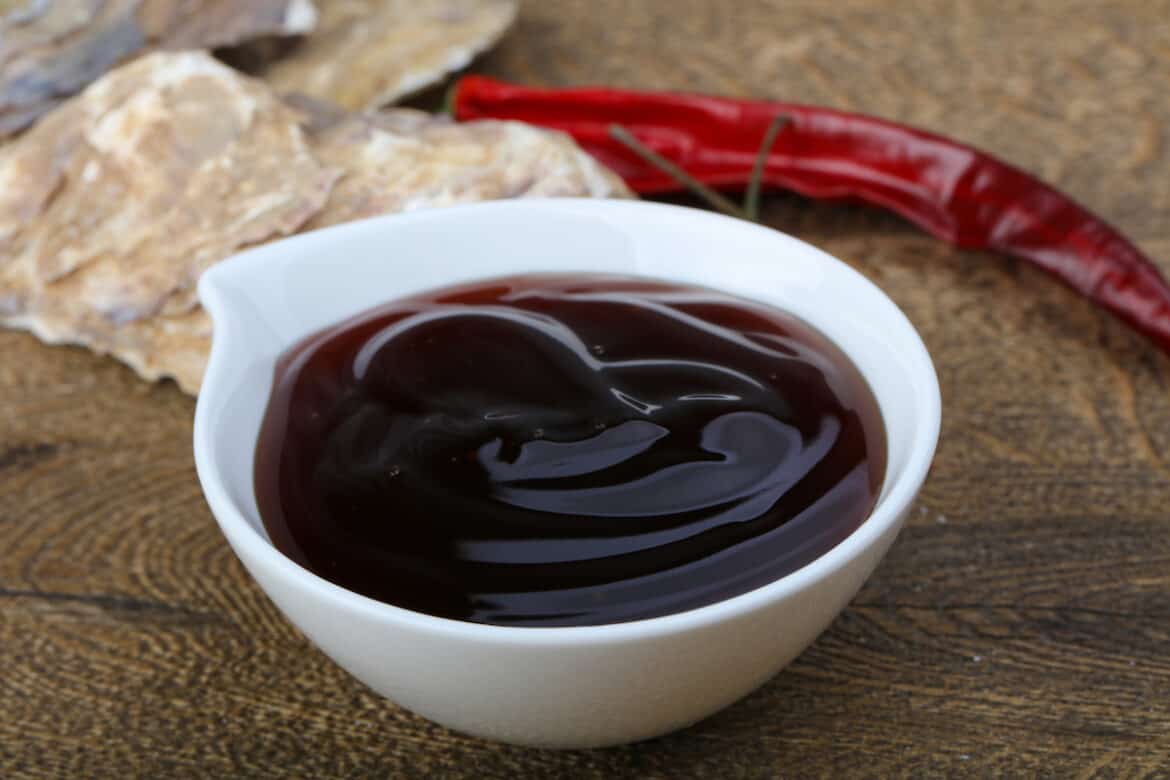 Stir fry, Kung Pao chicken, Spicy Sichuan noodles, beef and broccoli, chow mein – is your mouth watering yet? What is it that all of these dishes (and many more) have in common? If your answer was they are Chinese food, then you are partially correct.

Another common entity amongst these dishes is that they are commonly flavored with oyster sauce. Don’t be scared away by that title. You’ve most likely never heard of oyster sauce. Either that or you’ve come searching because your recipe for Kung Pao shrimp calls for oyster sauce and you need a substitute!

Keep reading to learn the best substitute for oyster sauce and more!

The Complete Guide to Substitutes for Oyster Sauce

Oyster sauce may or may not be a term you are familiar with. It’s a sauce that is primarily used in Asian dishes. It’s not a sauce you’re likely to find at your local seafood restaurants, although it is a possibility.

There are a few different ways that oyster sauce can be made but ultimately this is a brown sauce that closely resembles soy sauce. It’s made from cooking oysters and typically turned into a brown sauce that is used as a condiment or for cooking purposes.

Oyster sauce typically has extracts from the cooked oysters as well as water, corn starch, sugar, and salt to make it into a sauce. It’s naturally dark on its own most of the time but there are also times that it is darkened with the use of caramel.

If this doesn’t give you any indication, oyster sauce is both sweet and salty. You need only a tiny bit when you are making any kind of dish because it is quite salty.

Originally, oyster sauce was made solely by simmering oysters in water and then adding some additional ingredients.

Now, oyster sauce is still made this way but more commonly made using oyster extract or oyster essence instead to simplify the process and not mess with simmering oysters to make the sauce.

If you’re coming to this guide because you’re making a recipe that calls for oyster sauce but you’ve never even heard of it, we’ve got you covered. It’s not a common sauce unless you make a lot of Asian cuisines.

Of course, those who routinely make cultural Asian dishes are quite familiar with the sauce but there are many of us who don’t even realize we’ve had the sauce in many dishes at our favorite Chinese restaurants.

When using oyster sauce, there are typically other sauces used as well. It’s primarily cooked into dishes for flavoring but it can be used for dipping or as a topping as well. Remember that oyster sauce can be quite salty.

Here are some common dishes that are traditionally made with oyster sauce in them.

Oyster sauce can be used for bland foods, like tofu.

Oyster sauce has a bold and unique flavor and can easily improve those foods that are naturally bland. It’s not uncommon to drizzle a small amount of sauce on steamed Asian vegetables for additional flavor either.

And last but certainly not least, the most popular use of oyster sauce involves using oyster sauce to create a different type of sauce. This is where it comes to play in many Asian dishes (including those listed in this article).

It doesn’t taste fishy but has a salty and unique flavor that can be quite strong. Mixing into a sauce creation can tame the flavor while still putting it to full use.

Oyster sauce is certainly nothing to be scared of. In fact, if you enjoy any type of Asian cuisine, you’ve most likely had it in a dish and never even knew!

The Best Substitutes for Oyster Sauce

The greater challenge is that oyster sauce can be hard to find. If you’re making a new recipe and it’s not something you’ve purchased before, you’re probably pulling your hair out trying to find some. You’ve found hoisin, soy sauce, stir-fry sauce, and several other dark sauces but you can’t seem to find oyster sauce anywhere!

If your local grocery store offers an international food section, it could be there mixed with other Asian sauces. However, if you aren’t finding it there, your store probably doesn’t carry it.

Your best bet for finding oyster sauce is to either find a local Asian supermarket of some kind or to just order it online. It’s not a highly common sauce so it can be more challenging to find unless you have an Asian market nearby.

But that really doesn’t help you right now with finding a suitable substitute for your recipe, does it? That’s where we come in.

In fact, you might even notice that a lot of recipes for homemade Asian-style dishes don’t even call for oyster sauce. These recipes have already been adapted to leave it out or substitute something else for the flavor.

Soy sauce is perhaps the best oyster sauce replacement you will find. You can simply replace the called-for amount of oyster sauce with an equal amount of soy sauce.

This is the most common replacement and as far as flavor goes it’s going to be the most similar.

Soy sauce tends to be fairly salty and it’s similar in color as well. The primary difference is that soy sauce is not made with oysters. Essentially, they are very similar though.

Here are a couple of our favorite soy sauce options for you.

These are just a few of our favorites. They are great quality when it comes to soy sauce and these options certainly won’t let you down when you need a suitable alternative to oyster sauce.

The nice thing about soy sauce is that it’s a common ingredient in Asian cuisine already. If you regularly make these types of dishes, you probably already have some on hand. And if you have to go out and purchase soy sauce, it will be much easier to find at your local grocery store.

Don’t sweat not being able to find soy sauce. Just replace it with soy sauce in equal measurements and your dish will still be deliciously satisfying!

The fish are salted and fermented for quite some time and the end result is another similar sauce. Fish sauce is often compared to both oyster sauce and soy sauce.

It has the same brown color as well as sweet and salty flavor. This sauce does have a bit of fishy flavor to it that could make it stand out a little.

If you substitute with fish sauce, you will again substitute in equal measurement to what is called for with oyster sauce. You might even want to use slightly less if you’re worried about the fish flavor.

Fish sauce is most commonly used in Thai, Indonesian, and Vietnamese dishes but it makes a suitable substitute option when you need it. It’s also another sauce that will probably be easier to find at your local grocery store.

If you need a recommendation for which one to try out, we like these two options.

Fish sauce is the next best alternative depending on the type of dish you are making.

3. Make Your Own Vegan-Friendly Substitute

If you have any type of vegan or vegetarian dietary restrictions, you can make your own oyster sauce substitute that will be similar to soy sauce. You just need some mushrooms or mushroom broth, brown bean sauce, and unprocessed sugar.

You will make a combination of water, mushroom broth, brown bean sauce, and unprocessed sugar and allow it to boil for quite some time.

After it’s boiled awhile, you will add a touch of cornstarch to thicken the sauce.

It’s a pretty simple combination and it works great, particularly if you have dietary restrictions that make it hard to find other sauces like soy sauce and fish sauce that will work for you.

The end result is a flavor very similar to soy sauce – without the oyster or fish.

If you’re set on having oyster sauce and need it sooner rather than later, you can always try to make your own.

Making homemade oyster sauce is not so bad and it will work in a pinch, you just need some oysters and salt and some soy sauce to give it the added flavor.

This won’t be exactly like oyster sauce but it will be pretty close, and this is the easiest possible way to make your own oyster sauce without a challenge.

This process will give you a homemade oyster sauce that will work quite well as a substitute. It’s not an exact science but it will sure get you close.

The thing you need to remember most is that you should not skip the oyster sauce altogether.

Finding some suitable alternative is far better than simply skipping the ingredient. You need something to use and any of these options here will make a good substitute.

You can also try things like hoisin or stir-fry sauce or a combination of the two to give you another option.

We hope you’ve found this guide to finding the best substitute for oyster sauce to be a valuable resource with plenty of options.

We invite you to review the question and answer section as well for some additional information that could be useful.

Can Oyster Sauce Be Used as a Dipping Sauce?

Oyster sauce makes a good dipping sauce for vegetables, it can also be drizzled over them. You will need a very small amount when used this way as it can be pretty salty in flavor.

Does Oyster Sauce Have a Fishy Flavor?

Oyster sauce has a bit of an earthy flavor but it does not taste fishy. It is more of a savory sauce with a sweet and salty taste to it.