Home Foodsguy Soy Sauce Vs Worcestershire Sauce – What’s The Difference?
FoodsguyThis vs That 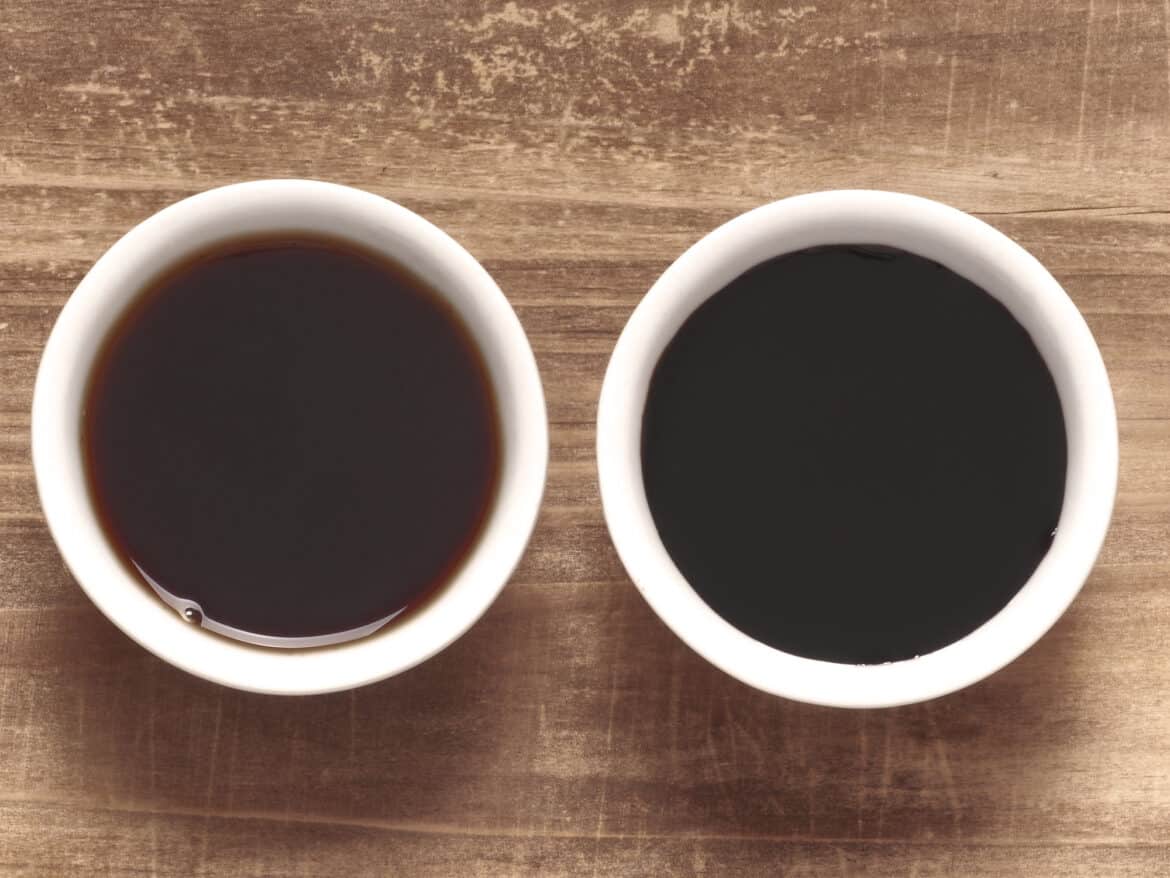 A kitchen just isn’t complete without the right condiments and sauces available to go with different meals. There are some basics that most kitchens have, and two of these include soy sauce and Worcestershire sauce.

What is the difference between soy sauce and Worcestershire sauce? Soy sauce is made mostly from fermented soybeans, salt, and koji mold, has a salty taste, and is usually used for Asian cuisine. Worcestershire sauce is made from many ingredients, including anchovies, onions, vinegar, and molasses, has a strong umami taste, and is primarily used for beef.

We have gone through the differences between soy sauce and Worcestershire sauce so that you can tell them apart, understand their flavors and ingredients, and use them correctly in the kitchen.

How Are They Made?

While both of the condiments are fermented, the difference is the time taken for either to ferment.

Soy sauce is only left to ferment for 6 months, whereas Worcestershire ferments for around 18 months, but this also depends on the producer.

What Are They Made Of?

Soy sauce is made from mashed soybeans, wheat, salt, and a special kind of safe fermenting mold called koji. These ingredients are then left to ferment together for six months.

The result is the soy sauce which has a sweet and salty flavor, and a light body. However, there are several kinds of soy sauce all with different levels of intensity.

The components are kept simple, which results in the fairly simple tasting sauce that goes so well with many dishes, and which is especially used in Asian cuisine.

Worcestershire sauce contains many more ingredients, which add to the complex, rich flavor of the sauce.

The tamarind in the sauce is what gives it the distinctive smell that any lover of Worcestershire sauce would recognize. All the other ingredients come together to give a depth of flavor that many love to have drizzled on beef dishes.

How Are They Used?

Not only are the ingredients and the preparation of Worcestershire sauce and soy sauce very different, but their applications differ wildly too.

Worcestershire is used mostly all over the world and is a wonderfully versatile condiment. The most popular use of Worcestershire sauce is to pair it with beef, but it is also used in soups, sauces, stews, and even Bloody Marys.

It is also popular to drizzle on top of eggs for some extra flavor, or in Welsh Rarebit. If you want to try using it in a new recipe, we recommend our recipe for slow-braised Boston butt pork.

Soy sauce is found in, and originated from, Asian cuisine. It is popular all over the world, but mainly for use in Asian cooking and cuisine.

Soy sauce can be used cold on foods such as sushi and sashimi, as it adds some salt and masks the fishy taste, or it can be used in cooking or sauteing hot dishes like stir-fry.

When soy sauce is heated in a meal, it gives a lovely aromatic depth to the dish and gives the finishing touch to many meals and rice dishes.

Soy sauce is also a great option to marinade foods, which helps to add flavor to meat, and darkens it a bit.

There is also a light version of regular soy sauce that has a strong salty taste, and dark soy sauce which is full-bodied and has a richer taste and a thicker texture.

What Are The Flavors?

Worcestershire sauce and soy sauce have different flavors, and it is easy to tell the difference between the two when tasting them.

The main component of soy sauce is the salty taste, which is highlighted by the simple ingredients used to give the soy sauce body and flavor.

The fermentation process does add more flavor to the soy sauce, but it is the tanginess and saltiness that sets it apart.

Both have flavors that are suited to a wide range of dishes, with soy sauce being used more in Asian cuisine, while Worcestershire sauce is used in quite a few different cuisines and dishes.

The History Of Worcestershire Sauce And Soy Sauce

Originally, soy sauce came from China, starting out as one of the many fermented foods there and eventually spread to Japan, where the recipe was changed a bit and refined into the most popular kinds of soy sauce available today.

Worcestershire sauce was first sold in Worcester, England. However, contrary to popular belief, this sauce actually has its roots in India.

It was recreated in England by a British nobleman who had encountered a similar sauce in India during his time there and missed it when he returned.

It was eventually perfected and sold by Lea & Perrins to be used on passenger ships, but the sauce become so popular that it was soon exported all over the world.

The Differences Between Soy Sauce And Worcestershire Sauce

To help summarize the differences between soy sauce and Worcestershire sauce, here is a quick breakdown of the two!

As you can see, the similarities of these two sauces end at their dark and oily appearance and incredibly high popularity all around the world.

To sum everything up, soy sauce is a salty and sweet sauce used in Asian cuisine and is fairly one-dimensional when compared to Worcestershire sauce. It pairs well with Asian food and goes especially well with fish.

Worcestershire sauce has a more complex depth of flavor that is achieved through an array of different ingredients and a long fermentation process.

The two sauces might look very similar but differ significantly when it comes to origins, production, ingredients, and most importantly, taste.

Both are great to have in the kitchen to use for their own purposes and to add a kick of distinctive flavor to many different dishes!

Can I Substitute Soy Sauce for Worcestershire Sauce?

It will work in most recipes once cooked in, but you will notice a difference if using the sauces cold, as soy sauce lacks the depth of flavor that Worcestershire sauce has.

What Flavor Does Worcestershire Sauce Add to Dishes?

These flavors are all balanced well in the sauce and bring about an umami flavor to the dish, which comes from the inclusion of anchovies to make Worcestershire sauce.

What Can You Use in Place of Soy Sauce?

If you have run out of soy sauce at home, you could use fish sauce, salt, miso paste, anchovies, or even some Worcestershire sauce.

Soy sauce is mainly used to add saltiness to a dish, so using plain salt works well, as it does just what soy sauce needs to, just with a little less flavor.

Why Is It Called Worcestershire Sauce?

Worcestershire sauce is named so because it was first made in Worcester, which is in the middle of Worcestershire, from a recipe that originated from India.

The sauce was first made there around 1840 and has since grown in popularity, paying homage to its English hometown by keeping the name.

Up Next: Recipe – Boston Roll Sushi

The Best Substitutes For Mozzarella