Home Foodsguy Kamut Vs Wheat – What’s The Difference?
FoodsguyThis vs That

Kamut Vs Wheat – What’s The Difference? 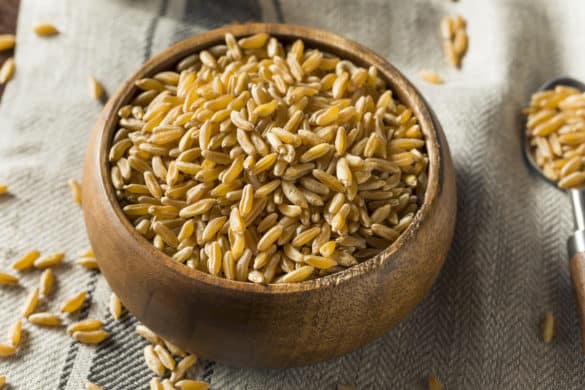 Wheat products have become the scapegoat for a wide variety of illnesses and diseases over the past few years, with a lot of blame being put on gluten. There is some question as to whether it is wheat and gluten itself that is causing such distressing digestive issues, or whether it is the processing and hybridization of the wheat that is causing human biology to launch an offensive attack.

People have come to love their wheat products and are reluctant to let go of them without a fight, so a lot of time and energy has been put into the mission to discover alternatives that will be just as enjoyable to eat, but cause less allergic and autoimmune responses.

One answer to the problem is to opt for gluten-free products. Another option is to look for wheat products that don’t cause the same level of digestive disturbance.

Ancient or heirloom grains, wheat products that have not been biologically altered, seem to fit this second mission quite well, and Kamut is one type of ancient grain that has become quite popular in recent years.

So what’s the difference between Kamut and wheat? Kamut is a type of wheat that contains less gluten and more protein than regular wheat. Kamut also provides 8 of the 9 essential amino acids. It is low in lysine, so you might want to pair it with lysine-rich foods such as eggs or tofu.

This article will look more closely at the differences between Kamut and wheat and help you decide when and how to make the switch if you decide it’s the right decision for you.

This is my favorite Kamut you can get on Amazon.

Kamut is a relative of modern wheat, but it has not been significantly hybridized.

One of the theories against wheat and gluten is that, over the generations, it has been altered so far beyond its original state that the human digestive system no longer understands it as food.

Depending on who you ask, Kamut is considered an ancient grain.

Its specific origins aren’t clear, so some will argue that it’s not technically an heirloom, but it’s generally agreed that it is a variety of wheat that has not been excessively genetically interfered with.

The name itself is actually trademarked by Montana farmers who wanted to protect the integrity and qualities of the grain, preventing it from becoming just another hybrid, industrial crop. The proper name is Khorasan wheat.

Again, it’s history isn’t 100% clear, but it is thought to have originated in Iran, and been rediscovered in Egypt. Assumed to be a staple in ancient cultures, it was lost and forgotten for many generations. It wasn’t until the 20th century when an American pilot was given a few grains and sent them to his family in Montana to be planted.

Kamut is a whole grain, and each kernel is significantly larger in size than its modern wheat cousins. The grains are also noted for their humpback shape and their lovely golden amber color. The flavor profile is similar to many other whole grains – rich and nutty and with a firm, slightly chewy texture.

Kamut thrives in dry weather, which makes sense in that it hails from the desert climate of Iran. This might turn out to be a huge advantage in times of drought when it can out yield durum wheat production.

Kamut has become a favorite of body-builders and vegans alike because of the high protein content in this wheat, and the fact that it contains 8 essential amino acids, making it an almost-complete protein.

When cooked as a whole grain, 1 cup has approximately 250 calories and 11 grams of protein, which is an impressive serving. It’s also high in fiber, with 7 grams in that same cup of cooked Kamut.

In terms of micronutrition, a single serving of Kamut can provide your complete daily recommended intake of manganese, an essential mineral that your body needs in order to keep your brain and nervous system operational. In other words, if you want to stay alive, you need manganese.

Kamut is also a great way to incorporate many different B vitamins, phosphorous, magnesium, copper, zinc, and iron into your diet. You’ll also get 100% of your RDI of selenium, another essential mineral that your body relies on.

Together, all this nutrition helps to support healthy bones, a smoothly operational digestive system, and a fast-thinking brain. There are also studies that show that the nutrients in Kamut can help keep your hormones balanced and your weight managed effectively.

The zinc and phosphorus are even thought to keep your immune system in peak condition and your liver efficiently detoxed without the need for any special cleansing.

There is some evidence showing that Kamut has anti-inflammatory benefits, especially when compared to a modern wheat inclusive diet.

Is Kamut Healthier Than Wheat?

Being that Kamut is a type of wheat, it does also have gluten, so it isn’t recommended for people with gluten intolerance or those who suffer from celiac disease.

That being said, it has less gluten and has been shown to be much easier to digest, so many people who find commercialized wheat products difficult might enjoy Kamut flour products more successfully.

Beyond that, Kamut has a much richer and more varied nutritional profile than common wheat and therefore is quite a bit healthier than wheat. Compared to Kamut, modern wheat is higher in calories and carbohydrates, significantly lower in protein and fiber, and has comparatively no micronutrients to boast about.

There is no doubt that Kamut is considerably healthier than modern, hybridized, and industrialized wheat. Most people love the flavor and even texture as well, so there is little reason not to make the switch whenever you can.

How To Use Kamut

Kamut can be used in most of the same ways that other wheat berries are used, though occasionally with a slight variation in a recipe.

As with all wheat, it is harvested as berries, which can be eaten as a whole grain. You can use Kamut berries in place of any other grain dish, such as pilafs, stir-fries, casseroles, or any other way you might enjoy rice or quinoa, for example.

You can also toast them and use them as a crunchy topping on your salads or pasta dishes.

Many people even soak the kernels overnight and then cook up as an alternative to oats for a hearty porridge style breakfast.

You can also find Kamut berries puffed, to be eaten as a cereal, or as flour, which can be used in pretty much any standard baking recipe that calls for flour.

As a whole grain, Kamut flour replaces whole grain flours measure for measure but might require a bit of adaptation if you’re replacing all-purpose or bread flour.

However, for anyone with severe gluten intolerance or allergy, it can have the opposite effect, as any food sensitivity will trigger an inflammatory response in your body. Because Kamut is an ancient grain, many people will find that they don’t react to the gluten in this type of wheat like they do with the more hybridized, modern strains of wheat.

If you have a strong reaction to wheat, you may want to avoid Kamut as well, however, if you’re able to eat wheat with only a minor level of discomfort, or none at all, Kamut might surprise you with some great anti-inflammatory results.

Which is better, Kamut, or spelt?

Kamut and spelt are both ancient, heirloom varieties of wheat and they both do contain gluten, so neither of them are good as gluten-free wheat alternatives.

They have similar nutritional benefits, but which one is better really depends on what you’re going to use is for. Spelt is quite water-soluble, so it will soften well and its flour will replace all-purpose flour measure for measure, though it requires less water and kneading in all recipes.

If you’re interested in using spelt for bread, you might be interested in checking out our article on the best flours for making a sourdough starter.

Kamut, on the other hand, is less elastic and requires more kneading if you’re going to turn it into bread. It also doesn’t rise quite the same as all-purpose flours, though many people think it has the best flavor. My best advice is to try them both, and decide for yourself which is better for you, personally.

If you’ve ever had whole-grain pasta, you can probably imagine what Kamut pasta tastes like.

They have a very similar, almost nutty flavor, but Kamut flour is a lot lighter and less dense than whole grain flour, and it makes for a pasta that has a mouthfeel more similar to white pasta. Many people who love Kamut pasta will even go so far as to say it has a bit of a buttery flavor.

Freekeh Vs Bulgur – What’s The Difference?

Can You Freeze Spirulina Powder? – The Complete Guide

Thanks for the information on kamut (and spelt). I appreciate the research. It saved me a lot of time. I accidentally ground spelt in my wheat grinder this morning and had the bread all kneaded and raising before I discovered the mistake. Then I noticed a bucket of kamut and wondered what to do with it. After reading your post I think I’ll try pasta. You were a great help! Thanks again.

Glad I could help Delina!