How To Reheat Paella – The Essential Guide 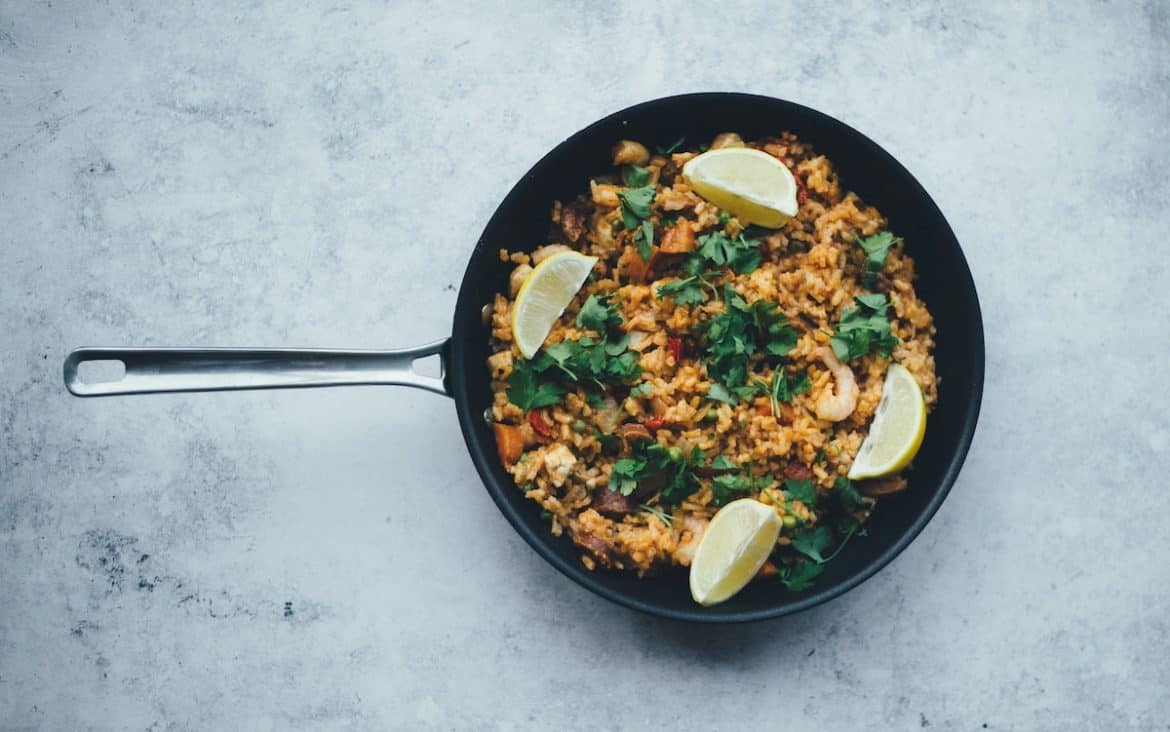 Paella is a delicious Spanish rice dish that is full of vegetables, seafood, meats, and seasonings. It is traditionally cooked and served in a pan, and the presentation is usually quite beautiful!

Paella is one of those dishes that rewards cooking in bulk. After going through all the effort to prepare and cook paella, it’s easy to realize that you’ve cooked way too much.

But this can be a blessing in disguise, and with a few smart moves, you can turn this into a huge positive. How? By storing and reheating it for your next paella craving.

But before we learn how to reheat, we need to know how to store it properly until we are ready to go through the reheating process. So first thing’s first, let’s get into how to store all that extra paella.

The Essential Guide to Reheating Paella

Before we can dive into the reheating part, we have to mention our best storage tips too!

How to Store Cooked Paella

If you end up with leftover paella, then there’s no reason to waste it by throwing it away. Instead, you can store it in the refrigerator or freezer for your future paella craving!

It’s important to let your food cool before placing it in the fridge, especially when dealing with absorbent foods such as rice.

If you put the paella in the fridge while it is still warm, the difference of temperatures between the fridge and the warm paella will cause condensation to occur within the container.

This will give you soggy paella. No one wants that!

Let the moisture escape first by placing it on the countertop. It is much easier to add more water to your paella later if it is too dry than to try and save soggy rice.

As a rule of thumb, paella with seafood in it should only be stored for around 24 hours maximum because seafood has the potential to go bad very fast. The side effects of eating expired seafood are not worth risking.

Paella made with non-seafood foods, like chorizo or chicken, can be stored for several days, potentially up to a week.

As always, make sure you double-check if something is still fresh (give it a good eyeball along with a whiff) before reheating.

How to Reheat Paella

When it comes time to reheat your delicious paella, you have a few choices to make.

Reheating paella in a frying pan

Choosing to reheat paella in a frying pan is the best option if you want your paella to be the same sort of texture and feel as it was when you originally cooked it.

Cooking paella in the pan takes a little more time and effort than the other methods, but it’s the best method if you’ve got the time. Here’s how:

There’s a possibility that the paella might start to cook or fry a little bit more than desired.

However, as long as you keep stirring to avoid any part of the paella to touch the bottom of the pan for too long, it should come out perfectly fine and evenly heated.

If it does start to dry out a little or stick to the bottom of the pan, you can add another splash of oil and/or water (but not both at the same time, or it could splatter since water and oil don’t mix well) and give it a solid stir.

Reheating paella in the oven

If you choose to reheat paella in the oven, be aware that it’s going to take a bit more time.

However, this will require less effort on your part than using the stovetop method.

The end result should be very close in flavor and texture to when it was initially cooked.

Reheating paella in a steamer

Using a steamer is an excellent option for reheating paella because the end result is generally moist and flavorful.

If you don’t have a steamer, you can check out this cool bamboo steamer which is perfect for reheating rice-based dishes like paella.

If you already have a steamer, all you need to do is put your paella evenly into your steamer and steam for around 8 minutes.

Reheating paella in the microwave

Using your microwave to reheat your paella is the least ideal option, but it is still worth mentioning.

If you need to reheat your paella and don’t have the time for the other methods, then you can definitely use your microwave.

You should avoid using the microwave to reheat seafood paella because it can give it a rubbery texture.

Have you ever over-microwaved frozen shrimp? If you have, you know what we’re talking about. Gross.

However you choose to reheat your paella, you now have all the information you need to safely store, reheat, and serve up a second delicious meal!

Can you freeze cooked paella?

Freezing paella is a great way to keep it in storage for longer. If you don’t plan on eating your leftover paella within a week, then freezing is the way to go.

All you have to do at that point is put it in the freezer. Frozen paella will hold for about a month before having to be thrown away. So make sure you remember when you first cooked it.

One smart thing you can do is to put a label on it, so you know precisely the date they were cooked.

To thaw frozen paella, you’ll want to take it out a day before you plan to eat it. When it comes time to eat it again, take it out of the freezer, transfer it to the fridge, and leave it for about 24 hours.

After 24 hours, your paella will have thawed through enough to be ready to cook using any of the four methods that we described above.

Are there any safety concerns when reheating paella?

Yes, there are two safety precautions when reheating paella:

As we mentioned earlier, our recommendation is that seafood paella should only be stored for around 24 hours, and not frozen.

Chicken, chorizo, or other non-seafood dishes should be safe to store in the fridge for around one week or freeze for up to four weeks.

Can I eat paella straight from the fridge?

While we’ve heard people rave about eating cold paella, we do not recommend doing this.

As with any food that has been left alone for a few days, there is a risk of food poisoning. While it might still be delicious, any bacteria that may have developed while in storage will be destroyed during the reheating process.

Reheating only takes a few minutes and does so much to improve the flavor. The end result is worth it.

Up Next: Jambalaya Vs Paella – What’s The Difference?

Can You Freeze Kielbasa? How To Do It Right

How To Fry Leftover Mashed Potatoes

How To Make Dehydrated Chicken Feet

How To Make Maple Cream

How To Cool Angel Food Cake (Without A...