Home Foodsguy Longaniza Vs Chorizo – What’s The Difference?
FoodsguyThis vs That

Longaniza Vs Chorizo – What’s The Difference? 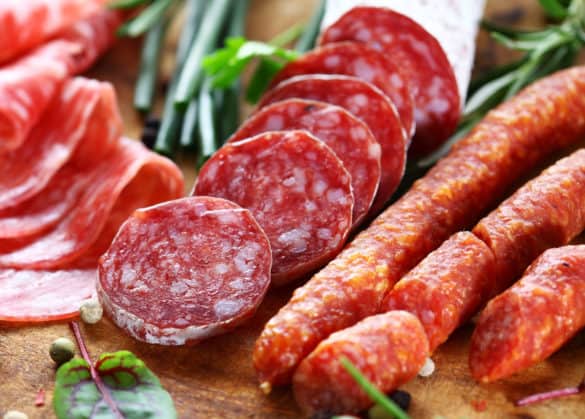 Chorizo and Longaniza are often mistaken to be the exact same thing. In truth, they are quite similar but they are not exactly the same. They are actually quite different and the cultures that use either of these regularly are quite familiar with the variations.

These two meats are closely related and they even come in similar packaging and flavoring means. You might not know the difference if you are not familiar with these meats or have not taken the time to be educated about the similarities and differences.

There are no complicated differences and they can potentially be used interchangeably but there are some distinct differences you should be aware of which we will get into more detail about shortly.

Keep reading to learn everything you should know about longaniza and chorizo and just how different they are.

A Comparison Guide to Longaniza and Chorizo

These two products look almost identical when you see pictures of them or even when you compare them at the grocery store. They do have some similarities but they also have some defining differences that are not known or seen by the naked eye.

As we progress through this guide, the differences will become clear and defined as well as some of the similarities of these two meat products.

We feel it best to detail each product separately and then to summarize the primary points for comparison purposes in the end.

Longaniza is a type of Spanish sausage that is dominant in many Spanish cultures. Longaniza is very popular in areas like Mexico, Chile, Argentina, Spain, Puerto Rico, and other regional areas as well.

Longaniza is processed in a variety of ways that vary throughout different countries and regions it is processed in but primarily you will find that it is flavored differently than chorizo. Longaniza may be mild or spicy depending on the region.

For example, in Spain, it is seasoned with black pepper while in Mexico it is seasoned to be even spicier than chorizo. Additionally, Argentine uses anise seeds which make it mild and sweet to eat.

Longaniza can be cured and will closely resemble pepperoni or salami when it is but will have much bolder flavor. Even mild-flavored longaniza has bold and savory flavors that stand out and contrast to any other type of cured meat.

Some would describe longaniza as closely related to chorizo and so far it sounds quite similar. In appearance, longaniza and chorizo will look quite the same. They both have dark red coloring because of the spices.

Another significant difference between chorizo and longaniza is that longaniza is made with minced meat. Longaniza is rarely cured but rather used as raw meat. When it is cured, the curing time is much less but using as minced meat is the preferred method.

Longaniza can even be made from home if you like. It takes a significant amount of work and effort so you may be better off buying it from trusted professionals but it is always a viable option regardless.

Longaniza in raw form usually comes in long sausages, longer than those of chorizo. Longaniza can be used in ground form but it is most commonly kept in sausage form for cooking and eating.

However, just because that is the most common way longaniza is used does not mean it is limited to those uses.

Here are a few uses for longaniza:

Chorizo is a more well-known counterpart to longaniza. Chorizo is a type of pork sausage that is finely ground and seasoned and then inserted into casings in short lengths of meat.

The most common seasonings for chorizo include paprika, red peppers, garlic, salt, and other seasonings.

As with longaniza, chorizo spice and compilation can vary from country to country and it is popular in a number of regions including Portugal, Spain, Mexico, parts of South America, the Caribbean, and eastern areas of Asia like Timor and Goa.

Chorizo is considered a Cajun-style sausage and is also quite popular in Cajun areas of the US, particularly Louisiana.

The meat in the casings is ground and is a mixture of chopped pork meat mixed with pork fat. The spices are what cause this meat to end up with a deep red color.

Again, the spices can vary but there is a general rule of thumb that long, thin chorizos are seasoned to be sweet and mild while short, thick chorizo is typically spicy and savory. The spicy flavor can be mild or heavily spicy.

Chorizo is a versatile meat and is often used for many of the same cooking concepts as longaniza but is actually more versatile. Longaniza is preferred as a sausage link while chorizo is preferred as spicy ground meat.

Chorizo can be used for many things and there is no set list, but here are some ideas of popular uses for chorizo.

As you can see, chorizo is relatively multi-functional and can be used for a variety of purposes but this list does not limit either longaniza or chorizo to just the uses listed. This is just to provide you with a basis and some of the most common uses.

It’s hard to retain all of this information and we thought it might be helpful to provide you with an overall summary to keep everything straight.

Chorizo and longaniza are quite similar. To the untrained eye and taste buds they will seem very much the same but to those who know they are irreconcilably different.

These two meat products are popular in similar areas. Here are the primary comparisons to keep in mind.

We hope that you find this guide to differentiate between longaniza and chorizo to be helpful and informative and that you understand the primary differences between the two products. They can make a difference in the end result and to certain people.

We’ve put together a question and answer section that provides some additional detail and we invite you to check it out for further information that could be useful to you.

Are Chorizo and Longaniza Made with the Same Meat?

Longaniza and chorizo are both typically made with pork meat. However, longaniza is not specific and can contain any combination of meat, fat, or cartilage. The meats are usually smoked and combined to make longaniza.

Chorizo, on the other hand, is always pork meat but may be from various types of pork meat.

The spices in chorizo and longaniza can vary greatly depending on the region that they are processed or made in and what the culture there prefers. However, one thing remains constant. They always contain some form of garlic and chili peppers.

Both types of meat can be spiced to be sweet or savory rather than spicy but they will still contain these basic spices every time which is what gives them the deep red hue that is unusual to most meat selections.

Do You Have to Cook Chorizo or Longaniza Prior to Using it?

If you are not purchasing your chorizo or longaniza pre-cured, then you will definitely need to cook it before you use it. If the meat has been cured, it will resemble pepperoni or even salami and can be used in such a manner.

However, if the meat has not been cured then it is raw meat and should be stored and treated as such throughout use.

Can You Freeze Mayonnaise On A Sandwich?

Can You Freeze Chorizo? – Freezing Different Types Of Chorizo