Can You Reheat French Toast? – The Best Way 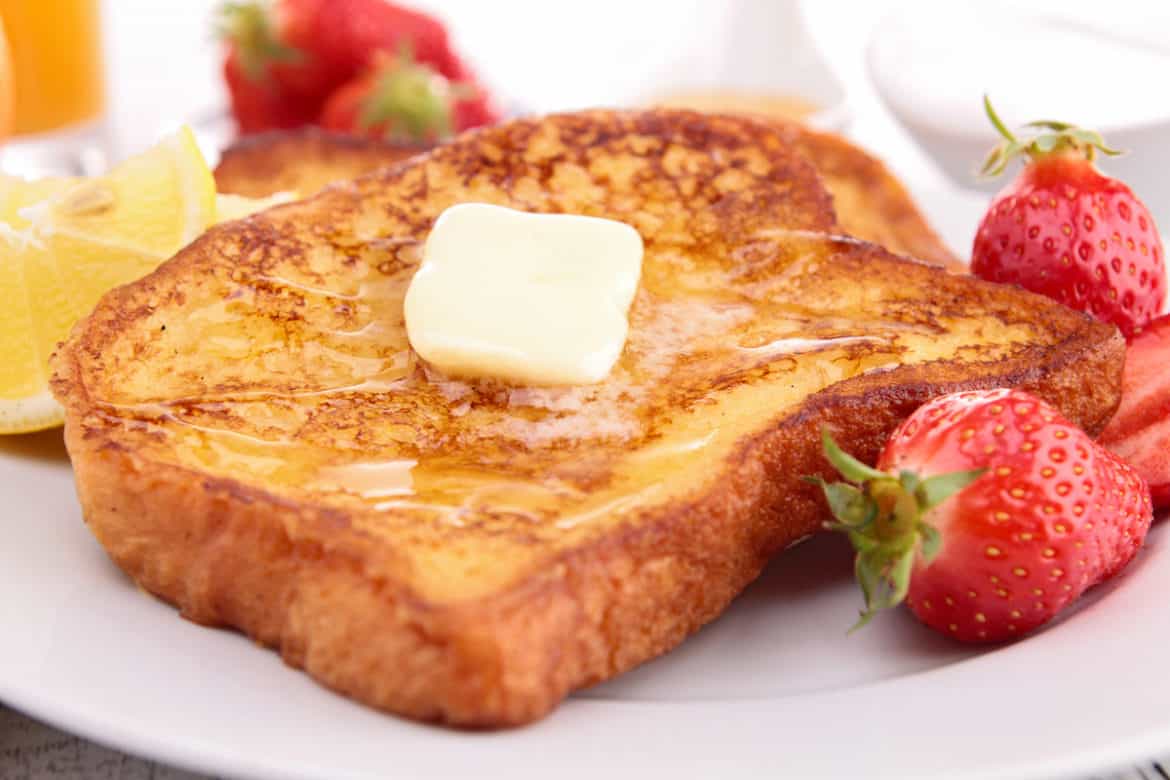 French toast is a breakfast meal enjoyed by everyone, and if you have made too many slices of French toast for breakfast, or if you want to meal plan and make some extra slice to ensure that future breakfasts are easy, French toast can be easily frozen.

However, when it is time to eat the leftover French toast, do you eat it cold or do you reheat it?

Can you reheat french toast? Yes, french toast can be reheated really easily. You can choose between a few different options when reheating French toast, but not all give the same great results. Between the oven, the stovetop, the microwave, and toaster oven or toaster, the oven will have the best results, with the microwave being the last on the list.

Keep reading to learn the best way to reheat french toast. We will tell you all the secrets to reheating the absolute best french toast of your life.

How To Reheat French Toast

French toast has an amazing ability, that when reheated, it tastes almost, if not just as, delicious as what it did when it was first cooked.

There are a few different options, including oven, stovetop, toaster oven, and microwave. As we mentioned before, the oven is the best option with the microwave being the least desirable.

Reheat French Toast in The Oven

The oven method is a great choice, as you can heat up family portions of French toast in one go. To use the oven method, you should coat a baking sheet with cooking spray, and then lay the French toast slices down evenly.

Remember to leave a ½ inch space between each slice of French toast. Preheat the oven to 400 degrees Fahrenheit.

Place the baking sheet with the French toast into the preheated oven and be sure to watch the toast carefully as it reheats. Turn the toast after around 4 minutes, allowing it to crisp on both sides.

You can reheat frozen French toast straight in the oven, but it will take a few minutes longer than refrigerated slices.

The air movement in the oven allows the French toast to be heated evenly throughout, while still allowing for a crispy coating.

Pros of using the oven

The oven undoubtedly offers the most even heating throughout but allows for the French toast to remain moist on the inside, and crispy on the outside. You can reheat a large amount of French toast in one go using the oven.

Cons of using the oven

The only con with using the oven is that you have to wait for the oven to preheat before placing the French toast inside. When you are really hungry, this wait can feel like a lifetime!

Reheating French Toast on The Stovetop

Using the stove is a good option, as it is probably how you cooked your French toast in the first place.

First, you need to heat up a skillet or stove-top griddle on medium heat and give it a quick coating with cooking spray. Place the French toast slices on the pan and keep a close eye on them.

The French toast slices will heat up quickly, only taking a minute or so to heat up on each side. Once the French toast has been heated thoroughly and is crispy again, remove it from the heat.

Pros of using the stovetop

The stovetop is a relatively quick option to use to reheat the French toast, other than having to wait for the skillet to heat up.

If your French toast is slightly soggy, you can also add some crisp back into it by melting some butter onto the skillet and heating it at a higher temperature.

Cons of using the stovetop

If the skillet is too hot, and you leave the French toast on for even a minute too long, it might burn and dry out and not be as edible as you would have hoped.

Reheating French Toast in the Toaster Oven or Toaster

You should also clean the toaster tray once the French toast has been reheated, as the sugary crumbs could cause smoke when the toaster is used again.

Pros of using a toaster oven or toaster

Cons of using a toaster oven or toaster

The sugary crumbs from the French toast which are left in the toaster could cause smoke if not cleaned out.

Reheating French Toast in The Microwave

The microwave is a gift for those who want quickly reheated food. French toast can be reheated in the microwave straight from the fridge or freezer.

Place the slice of French toast in the microwave and lay a damp paper towel over the French toast.

Heat it in short sessions of 15 or 20 seconds, checking after each reheating. Once the French toast is hot, throw away the paper towel and enjoy!

Pros of using the microwave

The microwave is the quickest way to reheat French toast, and pretty much everything else. There is no preheating needed and the French toast needs under a minute until it is reheated.

Cons of using the microwave

There is a risk that the French toast might dry out in the microwave.

How To Freeze French Toast

Freezing French toast is pretty easy. If you are wanting to meal plan for breakfast for the next few weeks, it would be best to cook the French toast in the oven.

This allows you to cook quite a few pieces at once, instead of having to stand over a hot skillet cooking the toast one by one. When the French toast is cooked, allow it to cool on a wire rack.

When the French toast slices have cooled, place one piece down and cover the top with a piece of cut wax paper.

While you can choose to use a plastic freezer container, it might not be able to fit too many slices in and may take up too much space in the freezer.

Make sure that the storage container the French toast is placed into, whether it be aluminum foil, a plastic bag or container, is shut tight.

There should be no extra moisture or air that may enter the container, and the French toast needs to be protected from picking up any odors from other foods in the freezer.

For the best results, the French toast should be consumed within 2 months of freezing.

Can you freeze french toast mix?

You are able to freeze French toast, once the bread has been soak in the batter, and before cooking it.

Place the soaked pieces of toast on a baking sheet which has been buttered or greased, and flash freeze it first for 45 minutes.

Once the slices have been flash frozen, you can transfer the slices into a freezer-safe container. It is best to flash freeze the toast first to avoid the slices sticking together as they freeze.

This way you can remove a piece at a time, or however many slices you need, instead of defrosting the whole batch.

How do you defrost french toast?

Most methods of reheating French toast allow for the slices to be reheated from frozen. However, if you are using the skillet or toaster, you should defrost the French toast before.

The safest way to do so is to leave the French toast in the fridge overnight, where it is allowed to sit safely and thaw, while not being exposed to higher temperatures that might result in bacteria growth.

If your mornings are usually really busy and rushed, French toast can be a great option to make ahead and freeze, for when you need a quick breakfast-fix. French toast freezes really well and can be reheated easily back to its original taste.

You can choose to reheat the French toast multiple ways, in the oven, on the stovetop, in the microwave, or by using a toaster or toaster oven.

Can You Freeze Pecans? – The Best Way

Can You Freeze Cooked Shrimp? – The Complete Guide