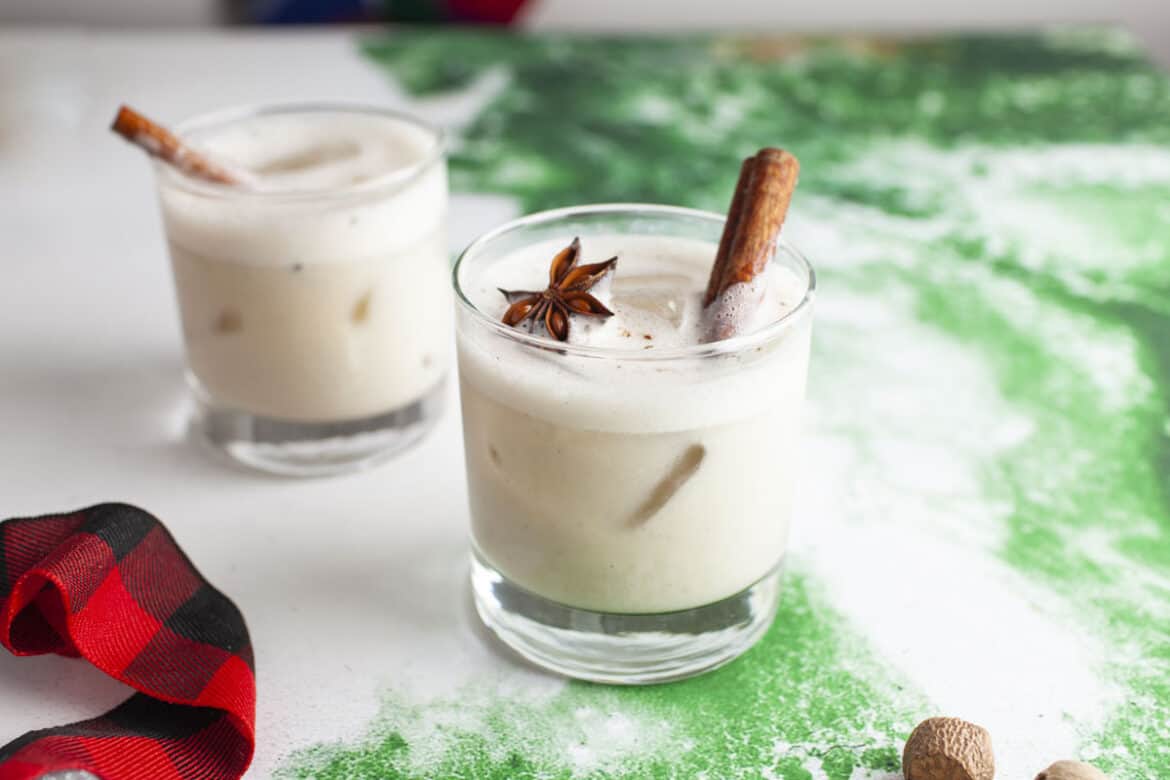 Did you know that people have been drinking eggnog to ring in the holidays and New Year since the 1700s? What a tradition! It was a holiday favorite even then because of all the warming spices.

We are still holding true to this Yuletide tradition, just modernizing it a little bit. I bet they wouldn’t have believed there would be an oat milk version hundreds of years later!

The holidays are, admittedly, a time spent in the kitchen for hours preparing good food and drinks for the people we love.

We thought, in that tradition of holiday hosting, we would add a quick 5-minute oat milk eggnog recipe for the occasions where you need something delicious and seemingly fancy, but really is the easiest cocktail ever!

With the creaminess of oat milk, the actual egg and cream part of the eggnog has been omitted, perfect for any family members who are vegan.

All that’s needed are a few ingredients, a blender, and some ice, and you’ll have a glass full of holiday cheer in no time!

What If I Don’t Have A Blender?

If you don’t have a blender on hand, add one serving into a jar with an ice cube, cover with a lid, and shake until frothy.

What Kind Of Bourbon Should I Use?

There are so many different kinds of bourbon, aren’t there? When choosing a spirit for your eggnog, focus on bourbons that have maple, spice, or rum notes to them. These will complement the spices already in your eggnog.

But really, can you go wrong with most of the bourbons out there? I would say no, most of the ones I’ve tried are pretty good these days. I ended up choosing one that had been aged in rum barrels and it was incredible!

Can I Make A Mocktail Version?

Of course you can! Feel free to make this eggnog with rum extract for a sans alcohol version that’s just as delicious.

It has no more alcohol in it than vanilla extract would, but you can even omit alcohol entirely with no substitute at all if you want to.

Can I Use A Different Milk Alternative?

I would definitely say that oat milk is the key milk when it comes to creaminess, but another milk that would come close is cashew milk. But in theory, any milk could work in this recipe.

Where Can I Find Star Anise And Cinnamon Sticks?

I find that a lot of stores have these items in the bulk or spice section. Buying them in bulk is oftentimes less expensive than buying them in a jar.

What If I Don’t Have Cinnamon Sticks, Star Anise, Or Nutmeg For Garnish?

Whether you don’t have these items or simply don’t want to use them, don’t fret! Sprinkling your eggnog with cinnamon powder or even a sliver of orange peel would be lovely—and just as fancy.

What If I Still Want Eggs In My Eggnog?

If you have a little extra time on your hands or you aren’t trying to cater to a vegan crowd, here’s how you can add eggs to this recipe:

We hope this recipe comes with many memories of sitting around the table eating amazing food, looking at the Christmas tree, or ringing in the New Year with the ones you love. Happy Holidays, everyone!

How To Make Oat Milk Eggnog

Add oat milk, maple syrup, ground nutmeg, and cinnamon to a blender and blend until frothy and all ingredients are fully incorporated. If you want to add an alcoholic kick to this drink, optionally add 4 oz of bourbon along with the other ingredients before blending.

Garnish with more ground nutmeg and a cinnamon stick or star anise (or both!).

Up Next: 8 Best Blenders For Spices