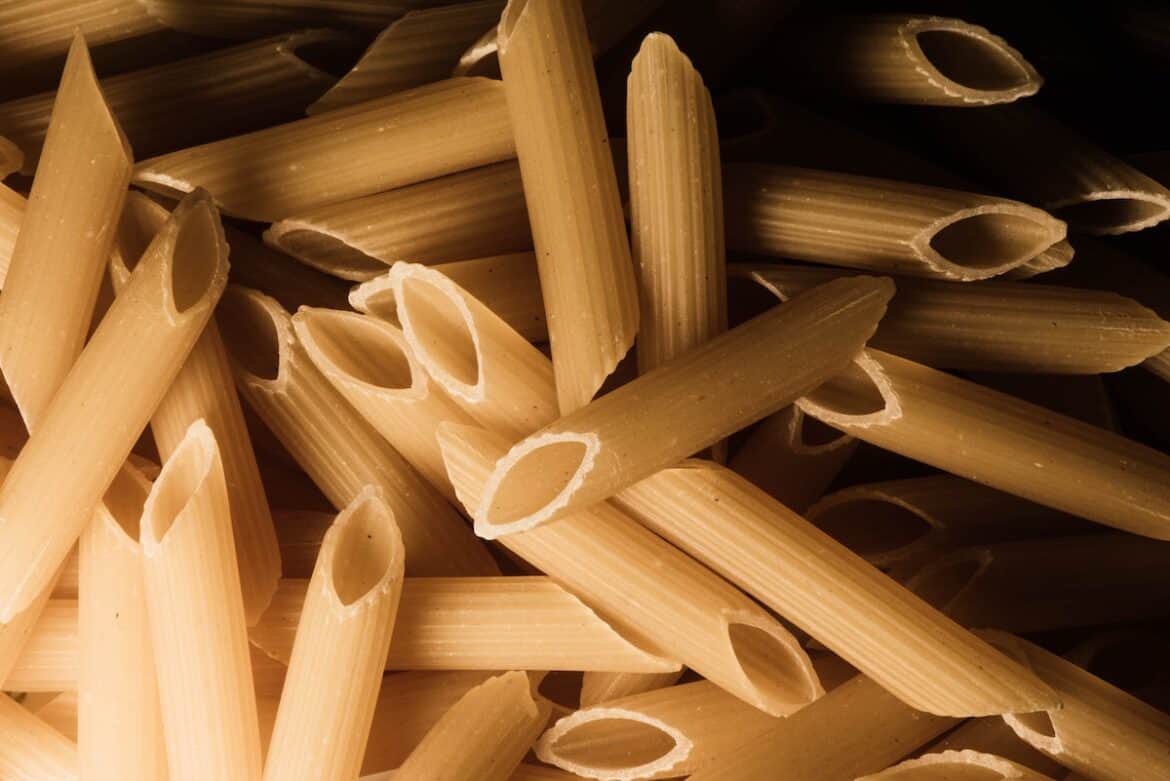 The world of pasta is so diverse that it is nearly impossible to remember all pasta names. Additionally, there are pasta varieties that look nearly identical but it turns out that they are different.

Penne and mostaccioli are a pair of pasta varieties that seem to be the same. But are they?

In this article, you will learn everything about penne and mostaccioli and what makes them different. From appearance to uses, we have compared all aspects of the two penne varieties.

You will also learn how to make penne at home and what pasta variety to use instead if you have run out of it.

Penne is one of the most popular pasta varieties with a tubular shape.

The ends of penne are cut at an angle and the surface has ridges horizontal to the length.

The shape of penne was inspired by a quill, and the word penne translates into ‘pen’ which makes perfect sense considering the shape of the pasta.

While there are many pasta varieties, penne is one of the few the date of birth of which was recorded.

It was in 1865 when Italian pasta maker Giovanni Battista Cappuro obtained a patent for the machine that could cut fresh pasta dough into the shape that is now known as penne.

The machine cutting pasta in a shape of a pen was a true breakthrough as before that the pasta was cut with scissors. The scissors left the edges of the pasta uneven and rough.

Although penne is known two have ridges, there are two main penne varieties – ridged penne and smooth penne. The former is known by the name penne rigate while the latter is called penne lisce.

There is also the wider penne variety – pennoni. These look just like regular penne but are much larger.

Penne was originally made with durum wheat flour. As durum wheat flour contains a high amount of protein and gluten, people have always found it to be an ideal flour variety for making pasta dough.

This is why whole wheat penne, and pasta in general, has become widely popular. Colored penned is also available in supermarkets.

Mostaccioli is also known by the name penne lisce. This makes it clear that it is the smooth variety of regular penne pasta.

Just like penne, mostaccioli also has a tubular shape and sides cut at an angle.

Mostaccioli Vs Penne – What’s The Difference?

So, mostaccioli is a type of penne pasta! But this doesn’t mean that there are no differences between penne and mostaccioli. Let’s compare all aspects of the two pasta varieties to see what makes them similar and different.

Penne is said to have originated in Liguria, a region in the northwestern part of Italy. Once penne became popular in Liguria, its popularity started to spread throughout the entire Italian peninsula.

Mostaccioli, on the other hand, is known to have originated in Campania, a region in Southern Italy.

In general, penne comes in two sizes. There is normal penne which is typically 2 inches long as well as mezze penne, which is around 1 inch long. Both penne sizes are very versatile.

It should be noted, however, that some US pasta brands make mostaccioli slightly larger than regular penne.

While pasta is traditionally Italian, it is widely eaten all over the world. There are over three hundred pasta varieties but most of us know the names of only a few of them. This is because some pasta varieties are more popular than others.

Penne is among the most popular varieties along with spaghetti, fettuccini, macaroni, fusilli, linguine, lasagna, and a few other pasta types.

As for the popularity of different types of penne, penne rigate (penne with ridges) is more popular than penne lisce (smooth penne).

The reason is that penne with a textured surface works with all kinds of sauces while smooth penne is only suitable for lighter sauces.

The traditional way of cooking penne is al dente, or firm to the bite. But penne cooks a little longer than pasta varieties that are thinner, such as spaghetti or fettuccini.

The uses of each variety of pasta largely depend on the category it falls under. The main pasta groups are the following.

Both penne and mostaccioli fall under the category of tube pasta along with such pasta varieties as bucatini, manicotti, pipe rigate, and rigatoni. Pasta with a tubular shape is perfect for holding lots of sauce.

As short tubular pasta varieties like penne and mostaccioli have thick walls, they are great for pasta salads and casseroles too.

Penne rigate pairs nicely with all kinds of chunky sauces. Thanks to its sturdiness, it also works well in dishes where you have big chunks of meat and vegetables. It also works well for salads and baked casserole dishes.

One of the most popular penne pasta recipes is arrabbiata. It features penne topped with tomato sauce. The sauce is hot thanks to the chili peppers used in it.

As mostaccioli doesn’t have ridges, it is best used with lighter sauces, such as fragrant olive oil or fine tomato sauce. Penne, thanks to its textured surface, can hold much heavier sauces.

The most popular use for mostaccioli is baking it into casseroles. These dishes are known as “pasta al forno”, meaning baked pasta.

You can bake mostaccioli with sausages or ground beef, your favorite cheese, including mozzarella and parmesan, and some tomato sauce. Baked mostaccioli is an easy one-pot recipe that will easily feed an entire family.

Can You Use Mostaccioli Instead of Penne?

As mostaccioli is essentially smooth penne, you can use it instead of penne in nearly all recipes. Some people dislike ridged pasta, so, mostaccioli makes a great alternative.

However, if you do substitute penne with mostaccioli, know that although the ridges seem to be a small detail, they do make a difference. Thanks to its textured surface, penne can hold a lot more sauce than smooth mostaccioli.

What To Do With Leftover Penne/Mostaccioli

Cold pasta, be it penne, mostaccioli, or another pasta variety, is rather unappealing. But what can you make with leftover pasta?

Sure, you can just reheat it with some canned pasta sauce. But isn’t it boring to eat the same food over and over?

Once you mix the freshly cooked penne or mostaccioli with sauce and have some leftover pasta, we recommend you chill it in the fridge and make pasta salad for lunch for the following day.

Making pasta salad is easy and quick. All you have to do is to mix the penne or the mostaccioli with your favorite ingredients – chicken breast chunks or shreds, various vegetables, greens, cheese, or whatever you like!

You can also top the pasta salad with your favorite topping to bring all flavors together.

Can Penne Be Homemade?

Making pasta at home can be a bit tricky for a beginner. There is a learning curve both to getting the dough right as well as shaping each pasta piece by hand. But there is no denying the fact that homemade pasta tastes better and fresher.

Additionally, when you make pasta dough yourself, you know what goes into it and can make it much healthier than store-bought pasta!

And yet, despite the difficulties, many people enjoy the experience of making different types of pasta at home, including penne.

Commercially manufactured penne doesn’t have a seam. You obviously can’t make penne that has no seam by hand. You can make homemade penne with no seam only if you own a pasta extruder with a die for penne.

But making penne by hand is possible too, all by taking advantage of the fact that penne and garganelli pasta look pretty similar.

The difference is that the ridges on garganelli are perpendicular to its length while the ones on penne are parallel.

Additionally, garganelli, unlike penne, has a seam. It is the part where the end of the pasta dough square adheres to the rest of the pasta once you finish shaping it.

So, if you’re making penne at home without a pasta extruder, then you can probably opt for some fresh garganelli!

How To Make Penne At Home

Penne is not the easiest pasta variety to make at home. However, if pasta making is something you enjoy doing and you have all the needed tools to make pasta yourself, why not try making penne too? This is how to make penne at home.

For this recipe, you will need a garganelli board (this one is our favorite).

Can You Make Mostaccioli At Home?

As the shape of penne and mostaccioli is quite similar, you can obviously make mostaccioli at home too. You may use a pasta extruder die for mostaccioli to make the process easy.

Or, you can follow the same steps as for making penne at home. In this case, the mostaccioli will resemble garganelli too. But you can use a plain cutting board or a flat pasta board to make the surface of the mostaccioli smooth.

What Is a Good Penne Substitute?

If a dish you are making calls for penne but you don’t have any, neither smooth nor ridged, you can use ziti instead.

Ziti is another tubular pasta variety. It is longer than penne and its ends are straight and not cut at an angle. Ziti is also larger in diameter than penne. But despite these differences, ziti may still work in many recipes that call for penne.

Up Next: Can You Use Jasmine Rice For Sushi?

Can You Use Jasmine Rice For Sushi?

What Vegetables Go With Chicken Alfredo?

Can You Make Pancakes With Water Instead of...