Home Cooking Tips Can You Microwave Cup Noodles? – What To Do Instead
Cooking TipsFood SafetyFoodsguyHow ToReheating

Can You Microwave Cup Noodles? – What To Do Instead 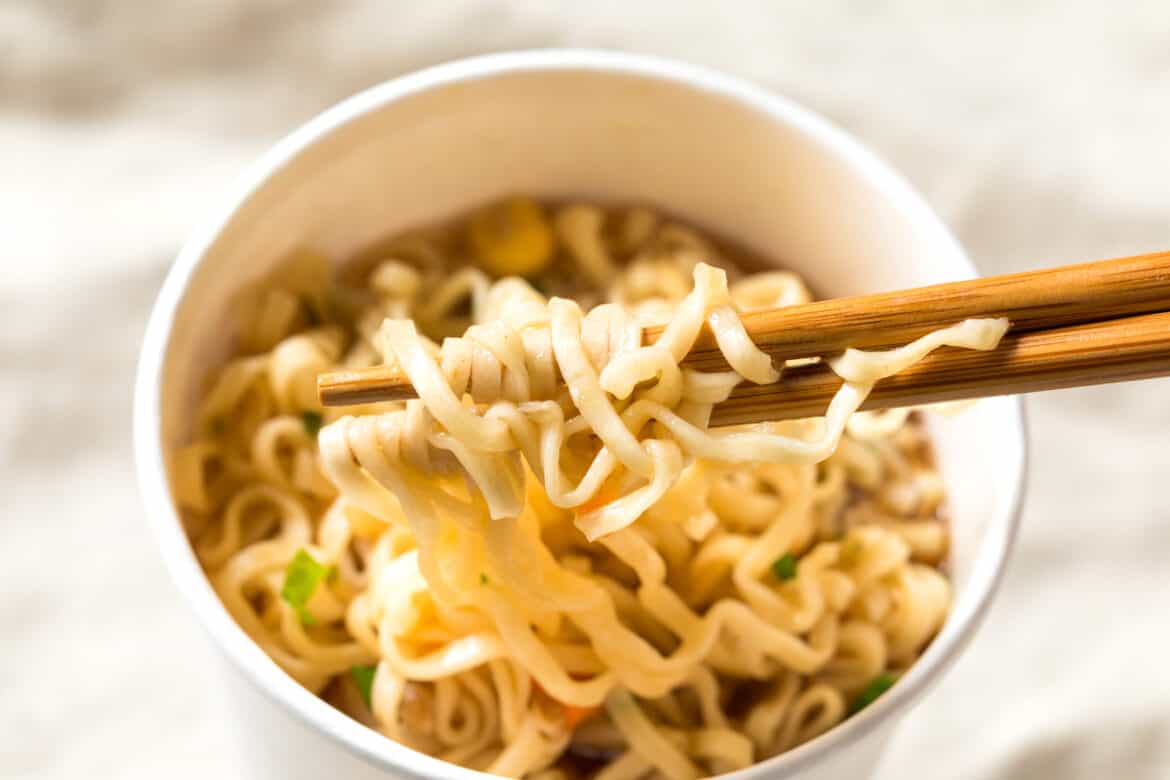 It is one of the most satisfying and easy-to-prepare foods around as it takes virtually no effort to make. Unsurprisingly, it has become a staple for most college dorms and apartments all around the world.

Of course, despite being extremely convenient as it is, one of the most commonly asked questions people have is whether or not they can cook their noodles in the microwave.

That said, we’ll delve deeper into this discussion as we explain why you shouldn’t microwave your Cup Noodles.

That said, we’ll provide some helpful tips on how you can prepare this delicious snack and we’ll give you a list of our favorite flavors that you simply need to try. So, be sure to keep reading.

First introduced to the market in 1958 by Nissin, Cup Noodles helped change the way we eat and appreciate this tasty snack.

Now, decades later, these Cup Noodles have become one of the most widely consumed products in the world. It owes much of its success to the unparalleled convenience it brings to the table.

Traditionally, noodle dishes require a lot of hard work. For instance, it takes hours upon hours to get the broth to achieve the right flavor and richness. In addition to this, making noodles from scratch also takes a lot of time and effort.

That is why the arrival of Cup Noodles is such a big deal. Without going overboard, we can confidently state that it is nothing less than revolutionary.

By drastically cutting down the long preparation process that goes into making a steaming bowl of noodles, the dish has become that much more accessible and convenient. Now, you can get your fix in a matter of minutes.

As we said, you should not cook Cup Noodles in the microwave. Instead, the best way is to cook it is by adding boiling water.

Making Cup Noodles properly is as easy as following the directions below:

Following these directions is the best way to make a great cup of noodles. It is important that you stick to the recommended boiling time here. After all, going beyond 5 minutes of continuous boiling will most likely lead to limp and soggy noodles.

If you want to get extra classy, you can pour your Cup Noodles into a fancy ramen bowl, or simply enjoy your treat in its original container.

Why You Can’t Microwave Cup Noodles

Now, as we look at the matter at hand, you will probably notice that the cooking directions don’t tell you to start microwaving at any point during the whole process.

On the contrary, if you check the packaging of your Cup Noodles, you will notice that there are explicit warnings that tell you not to stick it in the microwave.

There are two reasons why we recommend that you don’t microwave your Cup Noodles, both of which have a lot to do with the way the materials of the cup react to the heat generated by the microwave.

Needless to say, doing so can cause an unpredictable chain of chemical reactions. In short, by not following the cooking instructions, you may be unwittingly releasing harmful chemicals into your noodles.

On the other hand, you have another problem that comes of the heels of the last one. By heating your cup in the microwave, you may be compromising the cup’s structural integrity.

Remember that only the cup’s interior was designed specifically to handle and hold hot water. Unfortunately, you can’t say the same for the other parts of the packaging.

So, by microwaving your cup, you are essentially heating all the components of your cup. These would include the parts that are not designed to handle that level of heat.

It would hardly come as a surprise if you are inadvertently damaging your cup and leaving it especially susceptible to breakage and leaks.

That said, a quick look at the instructions should tell you everything you need to know about. Like with every other food, it is always best to follow the manufacturer’s recommendations as they serve as specific, if not invaluable, purpose.

Now that you know how to properly prepare Cup Noodles, we would be remiss if we did not run down some of our favorites.

So here are some of our favorite Cup Noodle flavors:

There you have it, some of our favorite Cup Noodle flavors. It is also worth stating here that you are practically spoiled for choice when it comes to variety. You can even get special Cup Noodles that are exclusive for certain regions in the world.

Preparing your snack entails following directions. This is crucial if you want to enjoy some Cup Noodles. That said, make sure to follow our tips above and explore the different flavors available to you.

Although we love this tasty treat, we should probably warn you that it isn’t exactly a healthy superfood.

Cup Noodles typically come with a block of noodles and flavor packets. The noodle itself is made using flour, salt, and palm oil while its flavoring usually has salt, monosodium glutamate (MSG), and special flavorings.

Presented below is a breakdown of its nutritional content:

As shown in the table above, Cup Noodles are relatively low in calories and high-fiber snacks. They also contain significant levels of and protein. In addition to this, they also typically contain numerous vital micronutrients such as folate, iron, and manganese.

That said, these snacks have high levels of Thiamine, also known as Vitamin B1, which helps energize the person’s brain and body, which is an unexpected bonus.

Take note that the actual content may vary depending on the flavors of the Cup Noodle you are eating.

For instance, some Cup Noodle variants make use of fortified wheat flour for their recipes. This may seem like a minor change but it can go a long way in terms of increasing the snack’s micronutrient content.

However, despite the presence of these nutrients, it would be misleading to say that the regular consumption of these snacks would constitute a healthy diet. On the contrary, excessive intake of these snacks will be detrimental to the quality of your diet.

That said, as with everything else, it is best to enjoy Cup Noodles in moderation. Eating them every now and then is harmless, but you shouldn’t make it the cornerstone of your eating habits. After all, anything taken in excess can be bad.

Up Next: Can You Freeze Rice Noodles? – The Best Way

Can You Refrigerate Bread Dough?

How To Store Carrots In The Fridge