Home Foodsguy Lima Beans Vs Fava Beans – What’s The Difference?
FoodsguyThis vs That 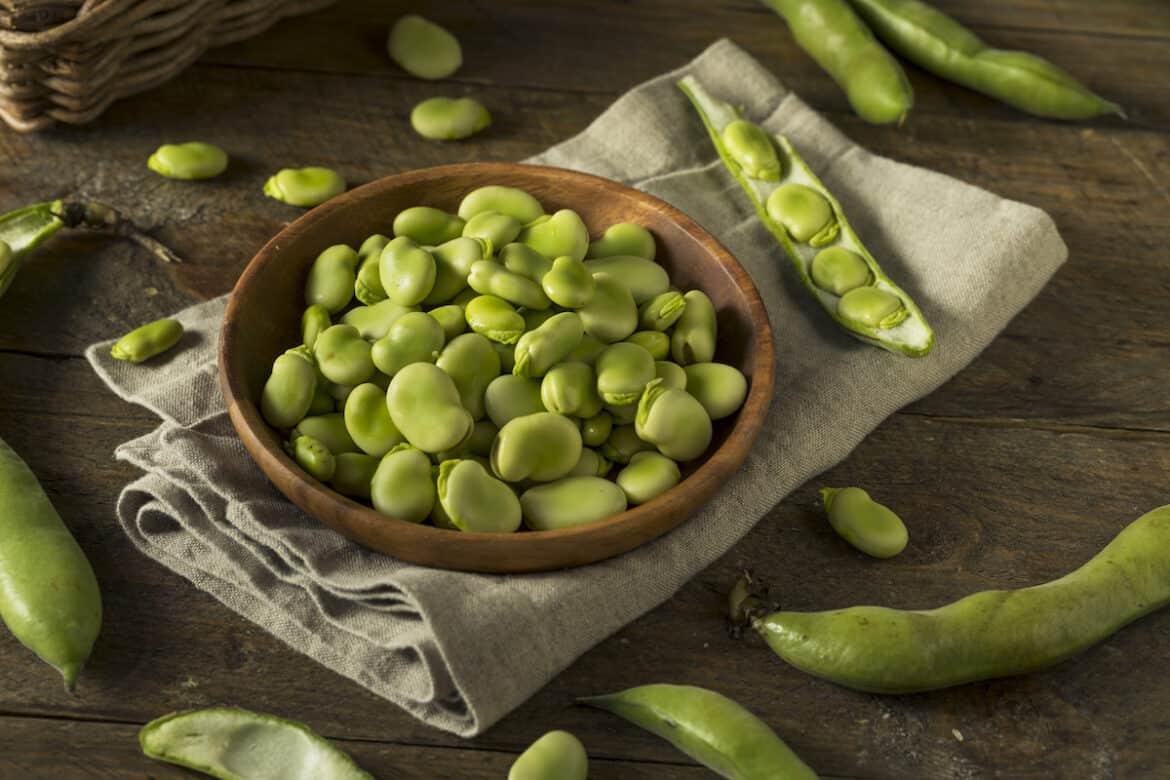 In this article, we have compared lima beans and fava beans to find out their similarities and differences. Read on to learn about the origin, texture, and taste of these beans, as well as about their nutrition and uses in cooking.

What Are Lima Beans?

Dating back to around 2000 BC, lima beans are also known as butter beans. They are called lima beans after the city of Lima, Peru, where they have been grown for centuries.

You may come across different lima bean varieties, including baby lima beans which many people prefer for their comparatively milder flavor profile.

What Are Fava Beans?

Fava beans are widely known as broad beans. Fava beans are indigenous to North Africa and have been around for centuries –since 6000 BC. They are a seasonal crop grown in different parts of the world.

This is the reason why these beans are used in various cuisines, from Asian to African, and from European to American.

These flat green beans are covered in tough clear skin which is removed before eating. As cleaning fava beans requires more effort, they are usually more expensive compared to other bean varieties, both fresh and dried.

What Are the Differences Between Lima Beans and Fava Beans?

Lima beans and fava beans have a few similarities, including the fact that both are very old legumes. Many people confuse these beans because of their somewhat similar appearances.

But the truth is, there are a number of differences between lima beans and fava beans.

We have compared all aspects of lima beans and fava beans. Here is how these beans differ in terms of their appearance, taste, texture, nutrition, uses, etc.

While fava beans and lima beans may seem similar to someone not very familiar with their peculiarities, the two bean varieties surely have differences when it comes to how they look.

Fresh fava beans are typically green while lima beans, though they can appear green too, can also be white, brown, with purple or red traces, etc.

As for the pods, lima beans have wide and flat pods while the pods of fava beans are bumpy.

If you want to easily distinguish lima beans and fava beans, you need to look closely at the seeds. In the case of lima beans, the point where the seed was connected to the pod is in the center.

In the case of fava beans, the point of connection of the seed to the pod is at the top of the bean (on the corner).

If you don’t like beans but want the health benefits they come with, then you should certainly give lima beans a try.

As many people believe, these beans lack the traditional beany flavor and are slightly nutty. They also have a slight sweetness.

If you cook lima beans properly, they will maintain their mild flavor profile. But overcooking lima beans can make them taste harsh and off-putting.

Fava beans have nutty and sweet notes too. However, they are not as starchy and taste richer than lima beans. According to many people, fava beans have cheesy notes too.

If you are trying to decide between lima beans and fava beans, their texture may be one of the reasons why you choose one over the other.

Fava beans are firmer and they don’t get crumbly after you have cooked them. Lima beans, aside from being starchy, are also softer than fava beans.

If you find fresh lima beans to be overly starchy and soft, we recommend trying the dried variety as they turn out more buttery when you cooked.

Lima beans and fava beans are both legumes which means that they are a rich source of protein. In addition to their high protein content, both bean varieties are packed with such nutrients as iron, magnesium, vitamin B-6, and calcium.

Lima beans and fava beans are also great sources of potassium. Potassium is one of the most important nutrients for the body. It is responsible for the regulation of fluid balance and nerve signals.

Here are the overall health benefits associated with the consumption of lima beans and fava beans.

Lima beans are a very versatile ingredient. You use them to make stews and salads. Blend lima beans until creamy for a delicious dip that you can spread on sandwiches and toasts.

Creamed lima beans are another popular way of preparing these beans. Adding cream and butter to lima beans makes their creamy texture pop.

And if this is what you like about lima beans, then cooking these beans in cream is what you should do.

The uses of fava beans differ depending on whether they are fresh or dried. Dried fava beans are widely used in recipes with a longer cooking time.

You can use fava beans to make soups and stews. They are also great for making falafel and various flavorful pastes.

As for fresh fava beans, you can eat them boiled, sautéed, roasted, or fried. Cook fava beans and use them to make filling salads.

Whatever you decide to do with these beans, make sure you cook them. As with other bean varieties, there are health risks associated with eating raw lima and fava beans.

You should boil the beans for at least 10 minutes before eating them to get rid of such toxins as phytohaemagglutinin.

Canned lima and fava beans can be consumed without cooking as the bens are pre-cooked before they are canned.

The storage rules are the same for lima beans and fava beans. You should refrigerate fresh beans that are still in their pods and use them within a few days. Keep the pods in a plastic bag while they sit in the fridge.

Dried beans will last around a year if you store them in an airtight container and away from light, heat, and moisture.

If you consider buying these bean varieties and incorporating them into your diet, keep in mind that it is best to buy fresh lima beans in August and September.

Look into tender green pods. Remove a bean from the shell and check it for plumpness.

Fresh fava beans are best in the springtime. When buying fava beans make sure to look for full and plump bright green pods.

The dried and frozen varieties of both lima beans and fava beans are available all year round although most people prefer them fresh.

Can You Substitute Lima Beans With Fava Beans?

You can substitute lima beans with fava beans and vice versa. However, when you do this, consider the flavor differences of the two bean varieties.

As the flavor of fava beans is stronger compared to the flavor of lima beans, they may overpower other ingredients in the recipe. And lima beans may make your dish taste milder.

While the two are interchangeable in nearly any dish, they are not the closest substitutes for one another.

Edamame is one of the best substitutes for fava beans. They have a similar flavor profile and cooking time. Thus, using edamame instead of fava beans is very easy.

As for lima beans, you can go with white kidney beans as one of the closest substitutes.

Up Next: Is Lemon A Fruit Or Vegetable?

Is Lemon A Fruit Or Vegetable?

Can You Freeze Salami? – The Ultimate Guide

Can You Juice Frozen Fruit?

How To Make Crispy Pizza At Home –...

How To Tell If Ground Turkey Is Bad...

The 7 Best Substitutes For Blue Cheese

Does Epsom Salt Expire? – What You Should...