Home Foodsguy Lemonade Vs. Pink Lemonade – What’s The Difference?
FoodsguyThis vs That 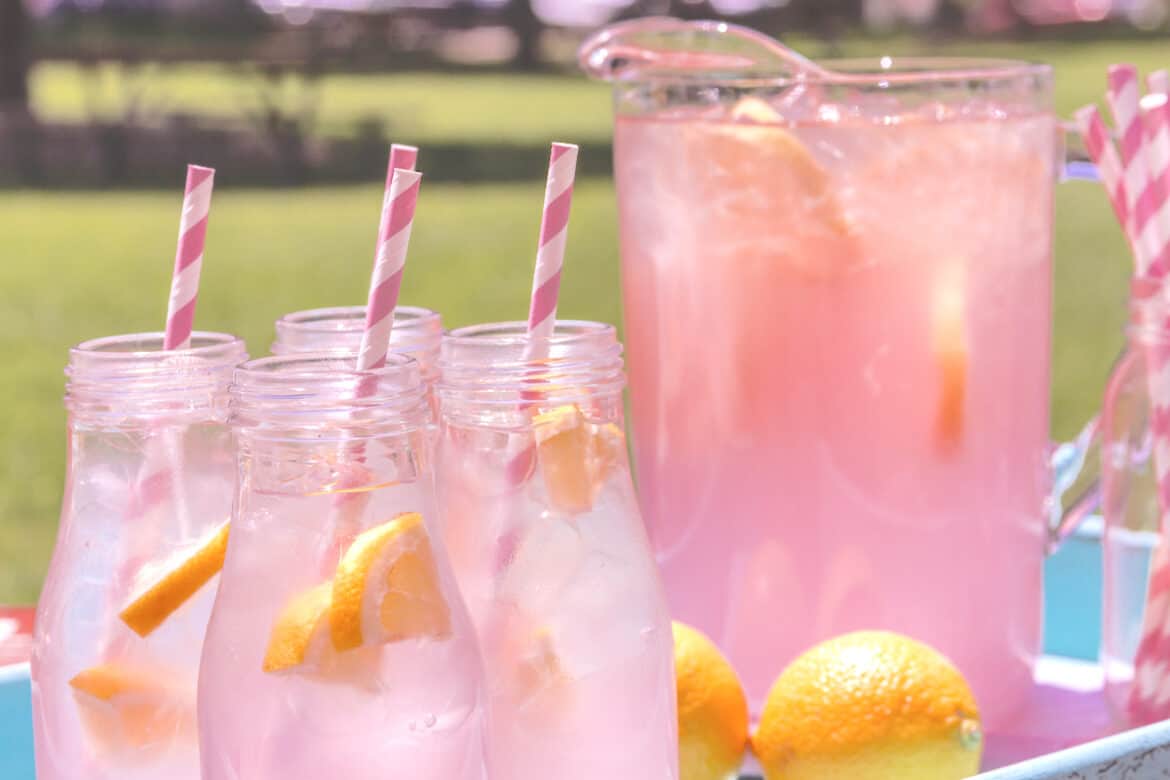 Family gatherings and beautiful weather are the perfect time to break out the lemonade pitcher and mix up the perfect batch of lemonade.

Whether you choose pink lemonade or just plain yellow lemonade, both have their own unique flavors that set them apart.

Maybe you don’t even notice a real difference in the two and just enjoy a tasty glass of ice-cold lemonade, regardless of the color it might be. In all honesty, you can’t go wrong with lemonade, right?

In this guide, we will walk you through a comprehensive review of lemonade vs. pink lemonade. We will cover each of these tasty drinks in kind so we can get down to the truth of the matter.

Lemonade is a classic, cool drink with just the right balance of sweetness and tartness. You can make your own fresh lemonade or purchase pre-made mixes for a quick, refreshing treat.

Some people prefer old-fashioned yellow lemonade, while others prefer pink lemonade. Others think that there really isn’t a significant difference between the two.

While this can be somewhat true, you might be surprised to find that the ingredients do vary, and pink lemonade has a lot of added ingredients to make it pink and sweeten the flavor a little more.

As we progress through this guide, we will first start by talking about the key elements of lemonade and break it down for you.

Then, we will cover pink lemonade in much the same manner. Once we’ve covered both lemonade and pink lemonade, we will wrap up with a summary overview and a quick recap of the differences between the two.

Lemonade is mostly translucent or light yellow but can be cloudy depending on the way it was made.

More natural lemonades don’t generally have added colors, but there are some brands out there that have added yellow dyes to make it brighter.

At its most basic, lemonade is just lemon, water, and sugar. And when we say sugar, we mean a whole lot of sugar, up to 25g per 8 fl oz.

When you’re trying to sweeten the puckering sourness of a lemon, you’ll need a good amount.

If you see lemonade that has more color than some cloudy or slightly yellow tint, then there is probably something else in it besides just traditional lemonade ingredients.

If you didn’t know any better, you might think it was just water with lemon in it until you take a sip and notice a stronger sweet and sour flavor that only lemonade has.

Of course, it’s also a very citrusy drink, so mixed with the tartness, lemonade packs a punch.

Even powdered lemonade is primarily lemon and sugar, but these might have some additional preservatives, acids, or other ingredients added to make them a viable powdered form.

You can find lemonade made in many different ways. The nice thing about lemonade is that it is a rehydrating drink as well. It actually carries with it some health benefits because of this.

Aside from the hydration benefits, different flavors of lemonade, such as lavender lemonade, can be calming for your mind and body. Lemon juice itself is also very healthy for your heart, metabolism, and digestive health.

However, as we mentioned previously, lemonade is packed with sugar and should only be consumed in moderation.

There are several variations of lemonade, from a variety of fruit flavors to different forms. While you can make it fresh, you can also buy it pre-made in gallon jugs or individual servings.

Apart from these two choices, you can even find it frozen, in slushy form, or powdered. However, powdered lemonade is the most likely option to have other additives in it.

Now, let’s talk about pink lemonade. It starts with the same basic lemonade base but may have red dye or grenadine added to give it its bubblegum pink color.

Often, it is also sweetened or naturally colored with ingredients like cherry, cranberry, grapefruit, blood orange, raspberry, or strawberry. Some even give their lemonade an extra floral note with rosehip.

The colors produced from these fruits may vary, but these ingredients naturally make pink lemonade taste sweeter and less acidic than traditional lemonade.

Pink lemonade is just as cool and refreshing. Interestingly enough, pink lemonade is often preferred over lemonade simply because people enjoy the pink color, but also because it is not as sour with the added fruit flavors.

Think of pink lemonade as lemonade with a twist. You can make your own pink lemonade. If you make it fresh, it probably won’t have red food dye unless a juice that you add has red dye already present in it.

There is no definitive proof for the origins of pink lemonade, but there have been stories of its connection to early circuses.

In one version, a circus ran out of fresh water for the lemonade they were selling, so a circus worker by the name of Pete Conklin grabbed a tub of dirty water dyed pink by dancers’ tights.

In another, Henry E. Allbot, a man who ran away to join the circus when he was young, accidentally dropped some cinnamon candies into a tub of lemonade and turned it pink. He sold it anyway and the idea quickly caught on.

Neither of these stories is particularly convincing considering the showmanship of the era, but it is thought to have been created in America with some connection to the circus.

But as far as we know, it may have been designed by a bartender who just wanted something new and exotic to work with. Maybe its fanciful appearance just inspired the whimsical tales of its origin.

Whatever the case, pink lemonade deserves the hype. It’s simply delicious and can be done a thousand different ways.

Much like traditional lemonade, you can make pink lemonade at home or you can buy another version. Like regular lemonade, you have the option to buy it in jugs, frozen, or powdered.

However, we recommend making it fresh, as it is so easy to make but so much fresher tasting. This way, you can also choose which fruits or other flavors you like best.

So What Are the Differences?

We’ve compared and contrasted regular and pink lemonade, but there are some specific things that we want to point out to summarize the differences.

While these drinks are very similar, keep in mind that pink lemonade is something more. It has added ingredients and variations that set it apart in flavor as much as color.

Lemonade is made with just water, lemon, and sugar, while pink lemonade uses these for a base but also may include red dye or something like strawberry, raspberry, or cranberry juice.

Both regular and pink lemonade can be made using more natural and simple ingredients, but pink lemonade is more likely to have dyes or additives.

We hope that you find this guide to be a helpful resource for understanding just how lemonade and pink lemonade are different and how they might be similar as well. There are some minor things that set them apart.

Below, you will find a question and answer section with some additional information.

Is Pink Lemonade a Specific Flavor?

The interesting thing about pink lemonade is that the flavor can be different depending on how it was made.

It typically contains a red or pink juice like strawberry, cherry, raspberry, or even cranberry but there is no guarantee of which one.

We encourage you to experiment with different flavors and fruit cocktails to perfect your own pink lemonade.

Can You Make Pink Lemonade from Scratch?

Yes! And, in all actuality, it’s probably healthier and tastier to make pink lemonade from scratch.

You can puree some strawberries and raspberries to make it or follow another recipe of choice. It may not be as bright pink when homemade, but the flavor will be similar.

There are hundreds of recipes out there, but you really can’t go wrong with just a bundle of your favorite red fruits.

How To Tell If A Lemon Is Bad