Home Foodsguy Freekeh Vs Bulgur – What’s The Difference?
FoodsguyThis vs That

Freekeh Vs Bulgur – What’s The Difference? 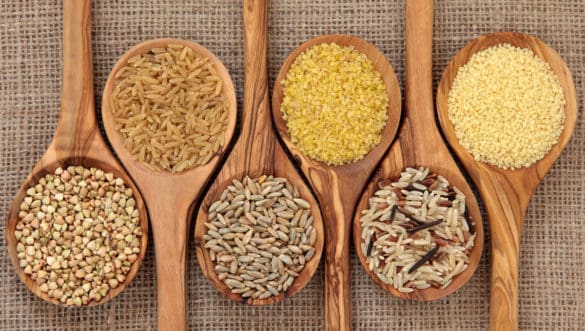 Whole grains and ancient grains are experiencing a revival—freekeh and bulger among them. As gluten intolerance pulls more and more attention, and yet humans are unwilling to say goodbye to their favorite sources of carbohydrates, alternatives have to be found to fill the void.

Freekeh and bulgur are both whole grains that have become increasingly popular and in demand over recent years but are still relatively new to the scene. If you’ve discovered a new recipe you’d like to try that calls for one or the other, you may be wondering what the difference is and whether or not you can substitute them for each other.

So what is the difference between freekeh and bulgur? Freekeh is harvested from young, green wheat, while bulgur is collected when the wheatgrass is fully mature. Freekeh has a green hue, and bulgur is more tan in color. Freekeh is chewier and has a slightly smokey flavor because it’s roasted. Bulgur is parboiled and has a nutty flavor.

This article will go in-depth on both grains, freekeh vs bulgur, and explain what’s the difference between them. We’ll also look at some of the benefits of each and the best ways to incorporate them into your meals.

The Difference Between Freekeh and Bulgur

Freekeh and bulgur are both wheat-based grains, as mentioned, but there are two major differences between them: the age when harvested and the processing before being eaten.

Most whole grains are cracked, making them easier to digest. However, before being ground, bulgur is parboiled or steamed whereas freekeh is roasted.

They are similar in their somewhat nutty flavor, but freekeh has a chewier texture and a hint of smokiness.

Freekeh is a very popular grain in the Middle East, its name coming from the Arabic word meaning “to rub,” a reference to the process of rubbing away the burnt husk from the green grain.

Quinoa has been stealing the spotlight for a few years now, but freekeh is actually just as easy to cook, more nutritionally dense and, many would argue, more pleasing to eat on both a flavor and texture-based scale.

Freekeh is smoked when it’s very young and immature, allowing it to keep more of its nutrition that the average cultivated grain.

1 cup of freekeh has the following basic and approximate nutritional profile:

It’s quite low on the glycemic index, making it a diabetic-friendly food and a great choice for anyone trying to stabilize their hunger and eating patterns.

Interestingly, freekeh also helps to feed the healthy bacteria in your gut, much like a prebiotic does. It’s also a good supply of nutrients like iron, zinc, manganese, and calcium.

It also has certain antioxidants that help keep your eyes healthy as you age, so that’s a definite long-term perk.

Cracked freekeh is quite easy to cook, simply being steamed in a covered pot with 2 parts water or broth to every 1 part grain. It will soak up the water, get nice and plump and juicy and tender and be ready for use in your dishes in 20 – 25 minutes.

If you find yourself with whole freekeh, you should give it a good rinse before cooking it and start it out in cool water, not hot water.

It’ll need more water, try 3 parts water or broth to 1 part freekeh, and a bit longer of cooking time, but no longer than 45 minutes on low heat after being brought to an initial boil.

It’s commonly used in pilafs, which are simple spiced grain dishes that can incorporate meat or vegetables. It’s also really delicious in stuffing or to fill up soups and stews for a hearty meal with loads of flavor.

Buddha bowls have become a popular way to enjoy quinoa, but freekeh is another great solution to this hearty, healthy, and flavor-packed meal.

You can add all the veggies, toppings, and dressings you’d like and freekeh will provide a good portion of protein if you don’t have any on hand.

In general, you can use freekeh in much the same way as you would use rice, knowing that you’ll be getting more protein, fiber and micronutrients, and few calories and grams of fat. You’ll also enjoy a deeper flavor, which can become very addicting.

Bulgur originates in the Mediterranean and has been a staple of Middle Eastern diets since the dawn of time, and it continues to feature prominently.

It’s usually derived from durum wheat, so it does have gluten. It is eaten as a whole grain, including the germ, endosperm and bran, and in order to make it a bit more digestible, it’s pre-cooked before being packaged and sold.

This makes it nice and quick to cook, which is very handy when you’re low on time like the majority of people in the world are.

Although it is a cracked form of wheat, it is not the same as “cracked wheat” in that it is pre-cooked and much quicker to cook than simple cracked wheat.

Even though it is pre-cooked before being sold, bulgur is minimally processed, especially in comparison to what most of us consider more traditional grain products made from refined flour. This allows the grain to retain much more of its healthy nutritional aspects.

1 cup of bulgur has the following basic and approximate nutritional profile:

It also has a lot of valuable micronutrients, most notably manganese, which is an essential mineral your body uses to help digest and process the other nutrients you consume. Bulgur also has a good supply of magnesium, iron, Vitamin B6, folate, and niacin.

Together, all these nutrients help keep your heart healthy, your blood sugar balanced, and your digestive system operating efficiently.

Bulgur is, and historically has been, popular in many middle eastern countries. It’s similar to couscous or quinoa and used in much the same way.

To cook, you simply have to pour boiling water over it and let it sit, soaking up the water and reheating. It’s already pre-cooked, so it really doesn’t take long.

It’s very easy to let your bulger sit in its hot water bath while you prep the rest of the components of your meal. By the time everything else is chopped, cooked and ready to go, your bulger will be too.

There are three different sizes or grinds of bulgur: fine, medium, and coarse. The larger the grain, the longer it will take to cook and, the lighter the meal, the smaller you want your grain to be.

Bulgur is commonly used as the staple ingredient in Tabbouleh (or Tabouli), a popular Mediterranean salad that mixes finely chopped veggies in with bulgur wheat and zests it up with an olive oil and lemon juice dressing.

Fine-grain bulger is a great way to bulk out any salad and make it more of a meal than a side dish while still maintaining the lightness of the dish.

You can also use bulgur as an oatmeal alternative or bulgur flour for your pancakes, waffles, and other breakfast favorites. Since bulgur is already pre-cooked, you can upgrade your overnight oats to overnight bulgur.

As long as it’s soaked, it’s good to eat, so add your favorite milk and fillings and let it soak overnight for a delicious instant breakfast.

Whole grains don’t go mushy and soggy like the processed, refined wheat product does, so bulgur, especially of a coarse grind, is a great filler to add to your soups, stews and chili and other high-liquid meals.

Is bulgur wheat better than pasta?

Bulgar is a very healthy grain and has a lot more nutritional value than highly processed white or even whole-wheat pastas.

However, if you’re looking for an alternative that is gluten-free, bulgur is still wheat and therefore has gluten in it. Quinoa would be a better grain of choice, for this purpose.

Is farro the same as freekeh?

Farro and freekeh are both very healthy and nutrition ancient grains but they are different. Freekeh is actually higher in fiber and protein than quinoa, which is famous for being a plant-based protein, but it is wheat, so it doesn’t have the gluten-free tag line.

The wheat berry is smoked when it’s still green, which gives it lots of nutrition and a delicious, smoky, nutty flavor. Farro, on the other hand, is also wheat-based and therefore not gluten-free, but it comes in either whole grain or pearled varieties.

It’s less chewy than freekeh, and a bit more like couscous. Farro is significantly higher in calories and carbs, with a tiny spike in protein and fiber as well.

Is burghul the same as bulgur?

Yes, burghul is the same as bulgur. In Persian, burghul means “bruised grain” referring to the process of steaming, drying, and grinding that it does through before you eat it.

Can You Steam Spaghetti? A Guide To Steaming Pasta

Kamut Vs Wheat – What’s The Difference?