Home Foodsguy Jackfruit Vs Breadfruit – What’s the Difference?
FoodsguyThis vs That

Jackfruit Vs Breadfruit – What’s the Difference? 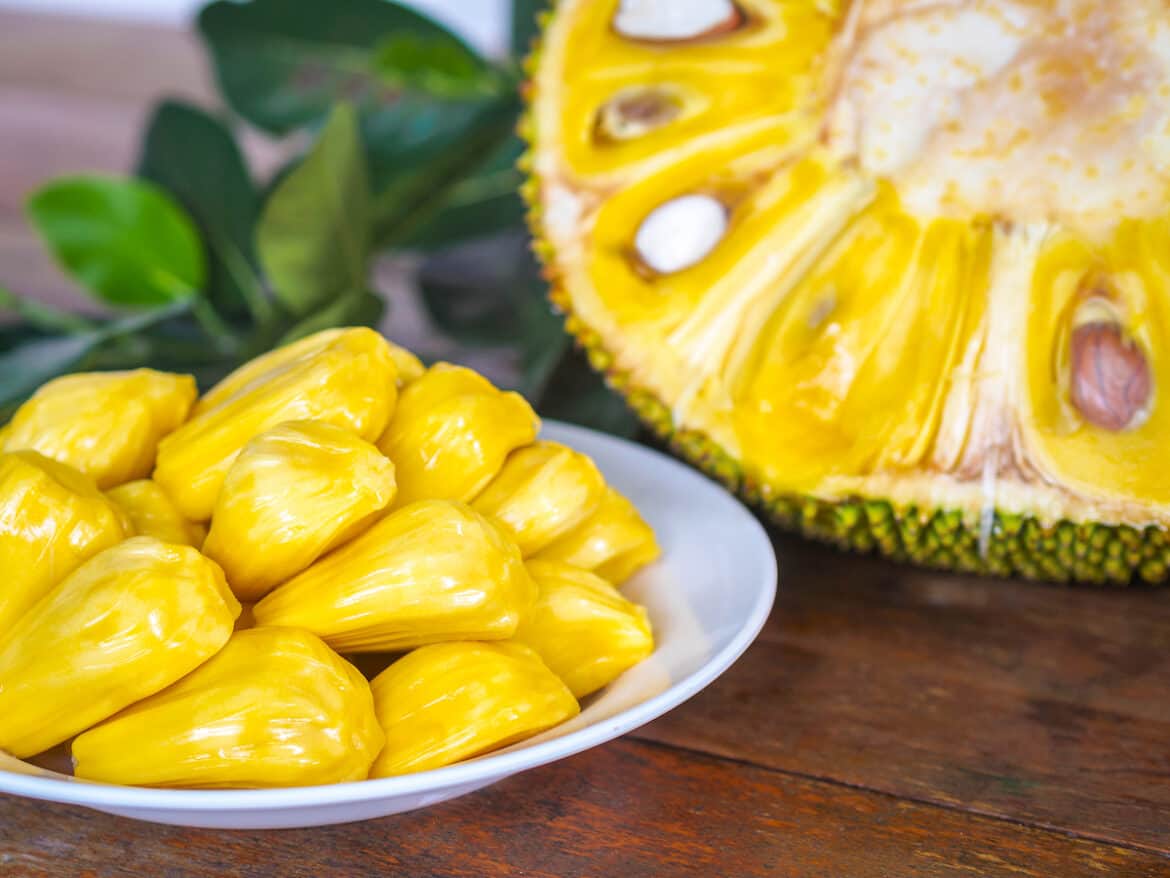 As the importation of exotic fruits and vegetables becomes more commonplace, you may be exposed to unique foods that you’ve never seen before and have no idea what to do with them.

If you’ve ever seen an exceptionally large, spiny fruit at a farmer’s market, you may have encountered either a jackfruit or breadfruit. They look very similar, but are completely separate and unique fruits.

There are other differences as well as a few similarities, so we invite you to join us as we explore these two strange, spiny fruits.

Jackfruit is a very large tropical fruit that can be found growing in tropical or warm places such as India, Brazil, the Caribbean, Puerto Rico, and Australia.

Though its closest relatives are figs and mulberries, the size of jackfruit is nothing short of impressive, especially the first time you come across one of these 50–100 lb giants.

The fruits are roughly oblong, though with curves and inconsistencies. They’re also covered in rounded spikes.

Depending on their maturity, jackfruits are mostly green with a rosy blush that deepens to brown as they ripen. It can take up to 3 years for a jackfruit to fully mature and be ready to harvest.

Jackfruit can be eaten before it is fully ripe and the flavor changes greatly from green to maturity. Young, green, and underdeveloped jackfruit have a very mild flavor, tasting slightly sweet but having more texture than anything.

Unripe jackfruit is most commonly cooked and, much like tofu, it will soak up any seasonings, sauces, or flavorings it is paired with. As such, it’s often prepared either as a vegetable or a meat substitute.

When jackfruit ripens, it sweetens. It is more likely to be eaten raw when fully ripe, often compared to pineapple flavored banana.

How to Eat Jackfruit

In North America, jackfruit is typically purchased either canned or packaged with sauce and available in the specialty foods section of the grocery store, typically along with other vegan food choices.

Some farmer’s markets may have whole or partitioned fruits, but you’re more than likely going to be eating jackfruit that has already been opened, dissected, and prepared for eating.

If you have fresh, ripe jackfruit, the flesh can be eaten raw or cooked. The nut-like seeds themselves, which are also edible, should always be cooked. They are often roasted and salted or boiled, mashed, and made into hummus.

The flesh of the fruit is often shredded. It can be slow-cooked in a sauce to make a pulled-pork, shredded beef, or chicken alternative, or it can be served with rice, tossed with other vegetables in a stir-fry, or prepared in any number of other recipes.

Because jackfruits are so large, if you manage to get ahold of a whole one, you may want to consider freezing your jackfruit for later.

Breadfruit is also in the mulberry family, making it a relative of jackfruit.

They look similar, but breadfruit doesn’t grow nearly as large as jackfruit.

The average breadfruit is harvested when it is around 10 pounds and about the size of a very large grapefruit.

Breadfruit trees grow in tropical locations. In North America, it grows in Hawaii and Florida or is imported from Jamaica and the West Indies.

There are many different varieties of breadfruit trees, but they’re all prolific, producing up to 200 fruits per season with minimal care or attention.

Breadfruit, much like jackfruit, can be eaten both ripe and immature, though unripe fruit should always be cooked before it is eaten. Mature fruits can be enjoyed straight off the tree.

The fruit was named for its flavor, which is very similar to freshly baked bread. The riper the fruit is, the sweeter it becomes.

The texture of breadfruit is quite starchy, so when it is cooked it’s also often likened to potatoes or, if quite ripe, sweet potatoes.

How to Eat Breadfruit

If you’re lucky enough to have access to a fresh, fully ripe breadfruit, you can simply peel away the skin with your hands and eat the fruit as-is. The riper it is, the easier it will peel and the sweeter and more pleasant the flavor will be raw.

It’s much easier to find the green, immature fruit pre-packaged for sale in grocery stores. This you will want to cook rather than eating it raw.

The large fruits can be quartered and steamed or baked with the peel left on, similar to cooking a squash.

The skin is edible, though slightly bitter, so many people choose to discard it before eating. With a little butter and herbs, your breadfruit will taste and feel quite similar to mashed potatoes.

You can also slice your breadfruit into chunks and deep-fry or bake it to make breadfruit fries.

Jackfruit and breadfruit are both staple food items in some cultures thanks to their impressive nutritional components. In particular, they both serve as good sources of sustainable plant-based protein.

In every cup of raw fruit, you will intake approximately 5% of your daily required value of protein. The fruits are so large and so delicious that, especially when eaten fresh, it’s easy to eat multiple cups of fruit in a single sitting.

Since the fruits are so closely related, there are quite a few similarities in terms of nutrition, though with a few differences as well. Let’s take a closer look at each.

We’ve already mentioned the protein content of jackfruit, but there’s plenty of other nutritious components inside this delicious food as well.

Jackfruit has fewer carbs than breadfruit but also correspondingly lower fiber. It’s also an extremely low-fat food, though that of course varies with preparation.

Jackfruit is also a great supply of both vitamin A and C, which help protect the health of your eyes and overall immune system, respectively. You’ll also get a nice boost of calcium, iron, magnesium, and potassium.

Altogether, the nutrition in jackfruit has been shown to help reduce inflammation, blood pressure, and cholesterol levels.

This is true for adding almost any plant-based foods to your diet, so try not to think of jackfruit as a miracle superfood, but rather one component of a healthy, well-balanced lifestyle and diet.

In North America, jackfruit has enjoyed a lot more popularity in recent years than breadfruit has, though for no good reason other than timing and publicity.

In many ways, breadfruit is even more nutritionally sound than its relative. Breadfruit is starchier, which increases the carb count, but it also provides more than 40% of your recommended daily intake of fiber in a single cup of fruit.

Breadfruit also outperforms jackfruit in terms of Vitamin C, iron, and potassium and supplies a decent amount of a variety of other nutrients as well.

If you have the time and opportunity, try not to ask whether you should choose jackfruit or breadfruit, but rather how you can incorporate both of them into your diet.

The two fruits look quite similar, but jackfruit’s scent is not nearly as strong. When ripe, jackfruit does have a high sulfur content, which can be unpleasant, but it’s not usually strong.

Many vegetables have a high sulfur content, such as cabbage and Brussels sprouts, giving off a similar signature smell.

Jackfruit has become a very popular meat alternative, often being made to a substitute for pulled pork or other shredded meat in saucy dishes.

The fruit itself doesn’t taste like pork or chicken, but it has a very similar texture and, when smothered in a similarly flavored sauce, is nearly unrecognizable from the conventional preparation.

Jackfruit is also a good source of plant-based protein and considered an extremely sustainable food item, making it a popular and delicious alternative to meat, even if it doesn’t taste exactly the same without some sauce or seasoning.

Can You Eat Breadfruit Raw?

As long as your breadfruit is completely ripe, it can be eaten raw. When breadfruit is mature, it will have a small amount of give if pressed and the skin will have a yellowish hue with some rough brown patches.

Unripe fruit will be bright green and firm.

The peel should pull away effortlessly, leaving a somewhat juicy layer underneath. The fruit should have a smooth, buttery texture and sweet, juicy flavor very similar to raw jackfruit.

Up Next: Fruits That Are Not Round

The Best Substitutes For Cream Of Mushroom Soup

Very well written. Thank you for sharing your knowledge. God Bless You!!!