Home Foodsguy Jackfruit Vs Durian – What’s The Difference?
FoodsguyThis vs That

Jackfruit Vs Durian – What’s The Difference? 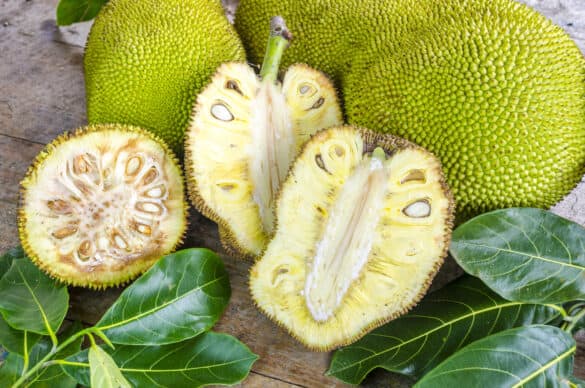 Jackfruit and durian fruit look somewhat similar, as they’re both large fruits with spiky green and brown exteriors. That’s where the similarities end, however, because the fruits themselves couldn’t be more different.

So what’s the difference between jackfruit and durian? Jackfruit and durian are similar in size and appearance, but when it comes to flavor, nutrition, common usage, and especially smell, they are unique. Durian tends to look spikier and is known for a stronger flavor and much stronger smell.

We’ll look at what makes each fruit special in great detail within this article.

Jackfruit is a tropical fruit that grows natively in Southern India, though it’s now also grown throughout most of Southeast Asia. It’s a relative of figs, mulberries, and breadfruit.

The jackfruit is a giant-sized, green to golden cocoon-shaped fruit, covered in small, pointy nubs. When we say giant-sized, we mean that a full-grown jackfruit can weigh up to 80 or even 100 pounds and be as long as 3 feet.

They are enormous. Because of their size, they take about 3 years to grow to maturity.

Jackfruit is commonly mistaken for breadfruit because they look a little bit alike, though breadfruit averages around 10 pounds. Breadfruit is also starchier, closer to chestnut or even a sweet potato.

The flavor of jackfruit varies depending on whether you eat it green or ripe. Inside each fruit are 5 chambers where the seeds grow. Protecting the seeds is a thick, creamy, jelly-like coating.

Green jackfruit that hasn’t developed its seeds yet has a mild flavor and is often used in cooking because it will take on the flavor of any sauce that it’s cooked with.

Ripened jackfruit becomes more yellow, both outside and inside, and it sweetens as it ages. Sweet, ripe jackfruit is almost a blend of tropical flavors, such as banana and pineapple.

Jackfruit smells quite distinct, thanks to its high sulfur content, and is often called “stinky fruit.”

However, it’s nowhere near as potent as the smell of durian, which we’ll get to in a minute.

Although jackfruit is often used as a meat alternative, that is mainly because of its texture, not its protein content. For a fruit, 3 grams of protein per cup is quite high.

As a protein supplement, plenty of other plant-based alternatives pack a much stronger protein punch.

There are numerous other nutritional reasons to add this odd plant to your diet, however. It has a decent amount of Vitamin C and includes a healthy array of powerful antioxidants.

If consumed as part of an otherwise healthy and balanced diet, it can help reduce inflammation, blood pressure, and cholesterol levels.

The same vitamins will boost your immune system and help maintain youthful skin, hair, and nails.

How to Open a Jackfruit

The first thing to be aware of, if you have purchased yourself a whole jackfruit, is the difficult-to-deal-with sap. It’s very sticky and can get in the way of consuming the fruit inside if you don’t know what you’re doing.

One way to deal with the glue-like sap is to coat your hands and knife with oil before digging in. The sap will not stick to the oil, making cleanup a lot easier.

The downside is the fact that oil is quite slippery and knives are sharp, so exercise this tip with a great deal of caution.

The other, less effective, yet more popular solution is to wear gloves. The sap will stick to the gloves instead of your fingers and arms, which makes clean-up easier, but it will still stick to everything else it comes into contact with.

A sinkful of hot soapy water comes in handy to clean your knife occasionally as you chop your way through the large fruit.

Once you’re set up, using a sharp serrated knife and some muscle, start from the top of the fruit where the stem was, and slice it all the way down.

Because of the size of the jackfruit, you’ll probably have to turn your fruit around once you get to the bottom and slice back up the other side to get all the way through. Imagine cutting through a very large avocado or mango.

Once you have your jackfruit open, remove the core. Tip your knife at an angle and work your way around to create a bowl-shaped dip in your fruit.

Your jackfruit is now ready to be eaten.

How to Eat Jackfruit

If you’ve just opened a whole jackfruit, you can pull each seed pod out and pry it open with your fingers or with the help of a knife.

Pop out the seeds and boil them to get a baby potato-like meal. The pod they grew in can be eaten as is, raw, or shredded and cooked in a wide variety of recipes.

In tropical climates where Jackfruit is grown, it’s not unusual to see the creamy flesh pulled out of the fruit, mixed with sticky rice, and then shoved into the large seeds, and eaten like that.

For those used to preparing jackfruit, this seems like the obvious way to eat it. For all other cultures around the world, it is a messy, time-consuming way to enjoy the fruit.

Jackfruit has become more popular in recent years following the upward spike of veganism. It is a popular meat alternative in many recipes because it can be pulled like pork or shredded like chicken.

If the green fruit is being used, it simply soaks up whatever sauce you put it in and the experience is almost eerily meat-like.

Because jackfruit comes in such a large quantity, you may not be able to eat it all in one sitting. In that case, check out our guide on freezing jackfruit for later.

Durian was first discovered in Malaysia, where it’s still the most popular, though it’s grown in tropical forests throughout Southeast Asia these days.

Like jackfruit, durian is a large fruit when compared to fruits that we’re used to seeing in “Western” supermarkets, like apples and pears. As far as tropical fruits go, it’s not highly unusual.

It compares, in size, to pomelos, coconuts or soursop, with an average weight of only about 5 pounds.

What should be noted about durian is that its spikes are more like thorns, unlike the nubs you’ll find on jackfruit or even the prickles on soursop.

Durian and soursop, or guanabana, is a common comparison because both are tropical fruits that are green and spiky.

Soursop does not have an overly distinct aroma and the flesh inside is white, almost pearlescent, with a unique sweetness and texture that seems perfectly designed to attract unicorns, despite its somewhat unattractive name.

Before we talk about the taste of durian, it’s important to discuss the smell. Durian is known as the stinkiest fruit in the world and is even banned from public locations because it’s odor is not just strong, but it carries and overwhelms.

Similar to jackfruit, durian has a high sulfur content, but the type of sulfur, hydrogen sulfide, has a much more potent aroma.

It has been likened to rotting onions, eggs, and sewage and it invades your senses before you have a chance to sink your teeth into the fruit.

If you can get past the smell or hold your breath long enough to avoid it somehow, the taste will be worth it.

The flavor is creamy, with undertones of caramel nuttiness and just a hint of cheese and garlic. We know. It sounds like an odd combination, but it’s strangely enjoyable.

Durian fruit, once opened, looks a bit like a yellow brain. The soft compartments that grow seeds are custard-like and encased in a thick membrane similar to the pith on a grapefruit or pomelo.

If you can get past the smell, your body will thank you. There are plenty of health benefits lurking beneath its smelly, spiky skin.

The fruit does a very good job protecting itself, but the rewards are plenty and it’s widely recognized as one of the most nutritious fruits on the planet.

Though Jackfruit may be more common in Western cultures, the nutritional value of durian should definitely put it on your radar as a food to try and, hopefully, learn to love.

How to Eat Durian

Similar to jackfruit, each durian has 5 chambers inside where its seeds grow. In contrast, however, if you know what you’re doing, durian is quite easy and much less messy to open and get at the fruit.

Each chamber has a seam that is slightly detectable along the outside but mostly obscured by the spikes. Using a towel to protect your hands, take a large knife and embed it into the center of the fruit where you cut the stem off.

Once it’s thoroughly inside the durian, wiggle the knife back and forth and the fruit will naturally split along the segments and you can simply peel it open. It will take some muscle power. As soon as it’s open, you can eat it.

If you don’t think you can eat all the fruit in one sitting, or you want to try it in new and exciting ways, there are a few options for cooking or baking with it as well, including curry, fruit salad, cheesecake, pastries or pies, and smoothies.

Up Next: 43 Foods That Start With D

The 7 Best Unglazed Pots For Cooking