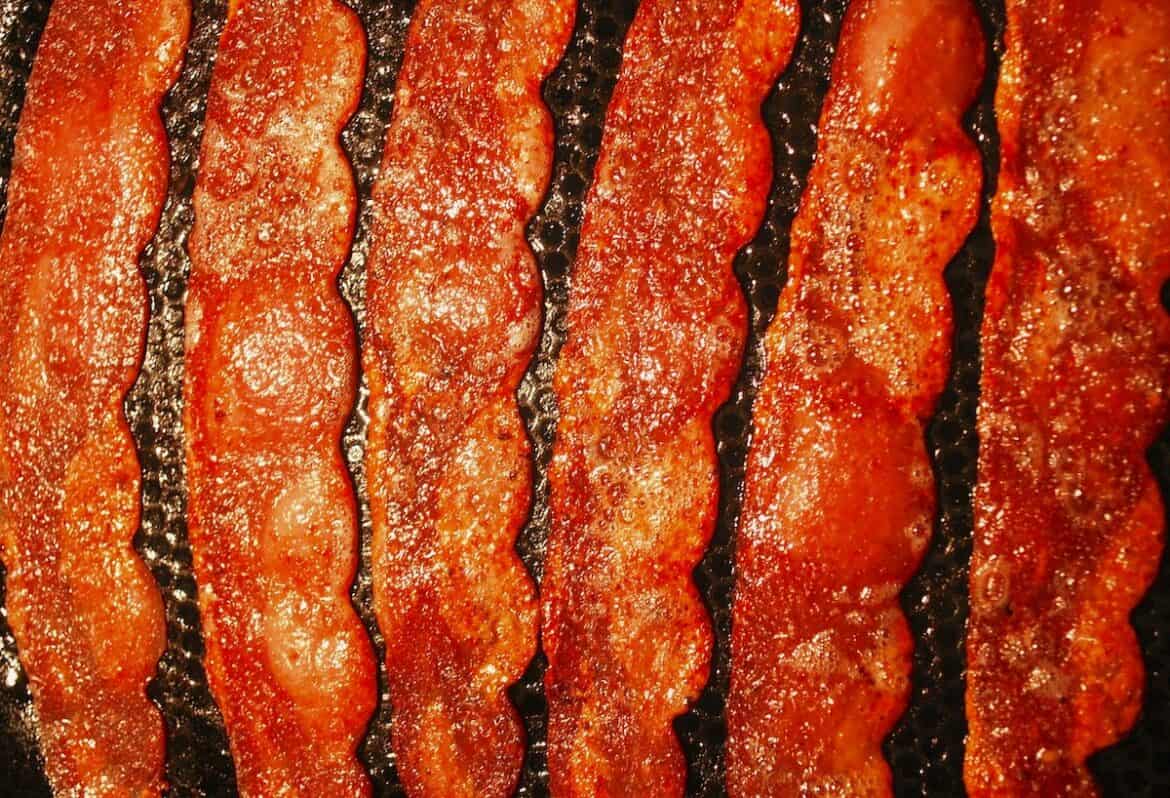 Whether you cook your bacon in a frying pan, a microwave, oven, or even an air fryer is totally up to you, but it pretty much always has to be cooked before eating it, right?

When you toss in an alternative option like turkey bacon, the details can get confusing.

Turkey bacon is designed to be a healthier alternative to traditional bacon, though one would assume that you follow the same rules in order to prepare it.

But is turkey bacon cooked already? Turkey bacon has not been pre-cooked, but some varieties have been smoked or cured. Cured turkey bacon can be eaten on its own, but it’s always safest to cook it first.

In this guide, we’ll discuss whether turkey bacon has technically already been cooked and whether or not you can eat it raw or if it requires additional cooking in order to enjoy. It’s a pretty unique product, so there is a lot to uncover here.

How much do you know about turkey bacon as a product? Where traditional bacon might be cured, it is not usually cured enough to eat raw and still needs to be cooked to be consumed.

Turkey bacon is meant to be an alternative to pork, with less fat in it. This meat product is made of chopped and smoked turkey meat that has been formed into thin strips to resemble bacon.

Most of the time, turkey bacon is cured before it ever goes out to the shelf at a store. It might also be smoked. You will need to check the packaging to be sure, but this is the majority for turkey bacon.

While traditional bacon needs to be cooked and usually has a pretty high grease content, turkey bacon is almost the opposite.

Turkey bacon will not produce a heavy grease content, so if that is something you’re looking for; you will need to revert to regular bacon.

Turkey bacon is almost more comparable to lunch meat. When you buy turkey lunch meat, you are buying meat that has been smoked and cured and cut into lunch meat slices.

It is almost the same for turkey bacon except that it has been formed into strips instead to resemble bacon.

Turkey bacon is cooked and re-formed before it is packaged and sold. It looks like real bacon but it is fully cured and typically smoked.

Can You Eat Turkey Bacon without Frying It?

If you are just not in the mood to fry up your turkey bacon, you don’t have to. Again, always double check the packaging to be sure it really is cured, but there’s a 99% chance it is cured and the chances are pretty high that it was smoked as well.

Those processes actually “cooked” the bacon so that you don’t have to worry about it if you don’t want to. You can eat cured turkey bacon without frying it.

Although, for most people, that is really not an appealing thought. The texture and coldness of uncooked turkey bacon is largely unappealing.

How To Cook Turkey Bacon

If you do want to cook your turkey bacon, there are a lot of different ways to do so. A lot of people really like the air fryer because it’s simple and convenient but also because you don’t have to battle as much grease in the process.

How To Cook Turkey Bacon On The Stove

The stove tends to be the most common way of preparing any kind of bacon, be it pork or turkey. Here’s the best way to do it:

How To Cook Turkey Bacon In The Oven

If you prefer the oven, try these steps for cooking turkey bacon in the oven.

How To Cook Turkey Bacon In An Air Fryer

If you’re interested in testing the air fryer, here are some simple instructions for you to try!

How To Cook Turkey Bacon In The Microwave

Finally, check out these microwave instructions.

Cooking times may vary here because not all microwaves are created equally. If you’ve got some extra time, we have a ton of tips for you in our article on how to cook turkey bacon in the microwave for the absolute best results.

The Benefits Of Turkey Bacon

There are some benefits associated with turkey bacon. A lot of people have turned to turkey bacon simply because it’s a healthier option than the alternative.

It is less greasy, has a lower fat content, and even has fewer calories than regular bacon does. This combination leads those looking for healthy alternatives straight to turkey bacon.

Turkey bacon is easy to cook and work with and it can even be uncooked, if it is cured.

When you compare it to regular bacon, it won’t have the same amount of grease and it probably also will not get as crisp.

We hope that you find this guide to turkey bacon to be a valuable resource. The gist is that turkey bacon is cured typically before you buy it.

In this case, you don’t necessarily have to cook it, but it will taste better if you do. Cooking is also always the safer option, though.

We invite you to review the following question and answer section for some additional details as well.

How Can You Tell When Turkey Bacon Is Fully Cooked?

With a lot of meat cooking, you can simply test the internal temperature to know if it is cooked to a safe level. Turkey bacon does not necessarily require cooking.

A good rule of thumb to know when your turkey bacon is done is when it is browned in color and crisping around the edges.

As far as health properties go, turkey bacon is considered to be a healthier option.

If you are used to regular bacon, you will find that it has less grease and also will never have quite the same crispy texture as regular bacon. It does have fewer calories, lower fat, and less grease content.

Do You Need to Refrigerate Turkey Bacon?

Yes, turkey bacon should be refrigerated both before and after cooking. You can typically store it in the fridge for up to 5 days after cooking and you can freeze it as well.

Up Next: How To Tell If Turkey Bacon Is Bad

How Long Does It Take For A Fridge To Get Cold?