Is An Apple Fritter A Donut? 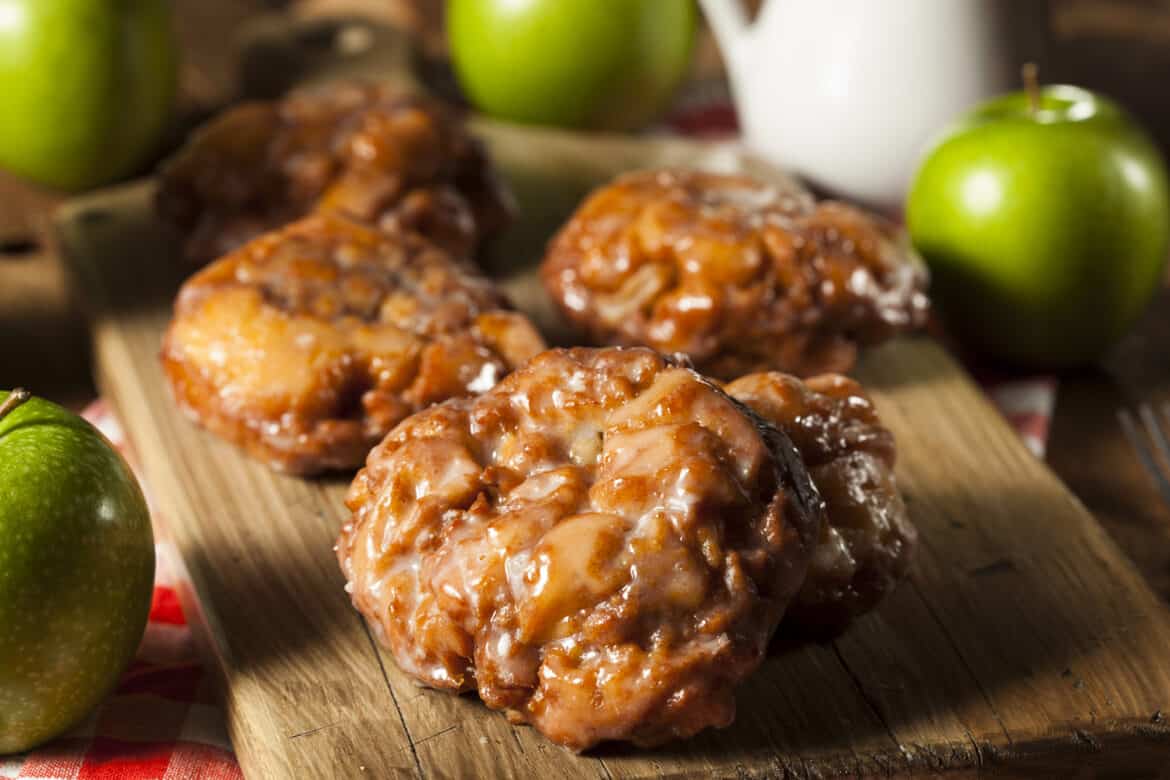 Apple fritters are sweet treats that have been around for a shocking amount of time. Over the decades, these treats have evolved considerably.

Naturally, their nature eventually led to the question: are apple fritters the same thing as donuts?

So, is an apple fritter a donut? To answer this question, you have to consider what defines a donut. Personally, we consider an apple fritter to be a type of drop donut. It is made from a sweet and flour-based recipe, is cooked in a similar way, has similar dough textures, and is also garnished with sugar or icing glazes.

Today, we dive deep into the arguments for both sides: why apple fritters aren’t donuts and why we can consider them to be a type of donut.

What Is An Apple Fritter?

Apple fritters are an old-fashioned sweet treat that is still enjoyed by millions across the globe today.

Originally these apple treats originated somewhere in Europe. It is estimated that it most likely came from Germany before spreading to other parts of the globe!

But what exactly are traditional apple fritters? And what are they made of?

These are very easy snacks to make: all you need is apples and fritter batter. The batter itself usually contains flour, sugar, milk, butter, baking powder, salt, vanilla, and eggs.

There are many recipes out there that also contain spices. These are usually some kind of autumn spice like cinnamon, nutmeg, allspice, and cloves. Many people also love using a simple pumpkin pie spice.

The apples used for these fritters don’t have to be cooked in advance. You can also play around with their consistency and how chunky you want the fritters to be (the batter versus apple ratio).

Once the batter and diced apples have been mixed, they can be deep-fried in oil.

And this is precisely where the controversy lies — just because the dough is deep-fried, that doesn’t mean something is a donut.

So what about apple fritters? Are they donuts? While they are very different in many ways, there are also a ton of similarities.

To best answer the question, it will be easier to first look at exactly what defines a donut.

What Is Defined As A Donut?

Contrary to popular belief and many narrow-minded dictionaries, a donut is more than just a ring-shaped piece of fried sweet dough.

Donuts are technically a type of oily cake, usually made with sweet dough. They are commonly fried in hot oil or using an air-fryer.

However, today this description is a lot broader! Many chefs and professors of food science consider a donut as any type of fried dough with an overall sweet flavor profile. The shape and size of these treats aren’t set in stone and neither is the texture.

Why Some People Say Apple Fritters Are Not Donuts

First, we will discuss the reasons some foodies are adamant that apple fritters cannot be a donut and shouldn’t be considered as one either.

Apple fritters are actually made with batter, not dough.

Honestly, this is probably the biggest reason we can understand the arguments against fritters being donuts.

Apple fritters aren’t made with sweet dough. Instead, a sweet fritter dough is used (similar to a pancake batter).

Now, you could argue that some donuts are made from batters, not dough — but these are usually considered to be fritters, not donuts.

As most definitions for donuts specifies, it should be a sweet fried dough product.

Many people say that donuts shouldn’t be chunky — while they may contain a filling or topping that has some texture, the dough itself shouldn’t have pieces of food in it.

So even if you say “donuts can be made from batter,” the texture argument is still made.

Unless the fritter batter is made using apple puree, some enthusiasts will argue that a chunky apple batter doesn’t make the cut.

The shape is all wrong.

Again, if you think “donut,” you probably automatically think of a ring-shaped treat. But as you may know, there are rough donuts that are usually filled.

So, what does it make those? They are made from the same dough, but their shape is different.

Personally, we just can’t get behind this argument. If you talk about the texture only, sure. But in terms of the shape, there are thousands of authentic donuts out there that aren’t ring-shaped!

Why Some People Say Apple Fritters Are Indeed Donuts

So, now that you know the arguments against the questions, let’s look at why other people say apple fritters should be considered to be donuts!

They are made from a sweet flour mixture.

Arguably the biggest reason people advocate for fritters being donuts is that they are also made from sweet ingredients. Sure, it may not be dough, but it is still sweet.

After all, what is a dough other than a less runny, more squishy batter? Yes, this does change the consistency of the inner crumb. But both are leavened, flour-based, sweet products.

This goes hand in hand with the fact that apple fritters do get glazed or coated with a topping and are served as a sweet treat.

They are fried in oil.

Another great argument is that fritters are also fried in hot oil. They also usually need the same temperature and even frying times as donuts.

While we wouldn’t say this is the strongest point that changes our minds, it is a point to consider alongside some others!

This is a very good point. Not all donut dough recipes are the same — some are made with very stiff and dry dough, while others are made with super spongy, aerated-leavened dough.

So, if that’s “allowed,” then why can’t a donut be made from a thick batter, similar to a tempura batter?

Yes, it isn’t traditional, but neither is a “cronut” — that doesn’t make it less of a puff-pastry product in a donut shape!

And neither are sushi donuts. They aren’t traditional, but it is still considered quality sushi and called a donut because of their ring-shape only.

They have a similarly soft, fluffy texture.

This is another excellent point we can stand behind. Fried apple fritters are just as soft and fluffy as some donut dough recipes!

They do have the added texture of the fried apples, but that doesn’t take away from the crumb.

Plus, if you’d like, you can also give the apple fritters a crunchier texture like some donuts have.

So, Is An Apple Fritter A Donut?

Personally, we do believe that apple fritters are a type of donut! Maybe it is a stretch to call it authentic or traditional, but the “yes it is” arguments are a lot more convincing than the “no it’s not” counterpoints.

Apple fritters are made with a sweet and thick fritter batter. The batter itself produces a variety of textures depending on the ratios of the ingredients. All of them can be similar to donuts in one way or another.

These fruity fritters are also fried in hot oil using similar cooking temperatures and times. Fritters can also be baked if the batter is stiff enough.

These are predominantly sweet treats that are even dusted in powdered sugar, coated in cinnamon sugar, or glazed with a thin, sweet icing.

So why not? If a ring-shaped sushi dish can be called a donut, so can these. And, if a bagel isn’t a donut even though the shapes are the same, then does the ring shape even matter?

So, yes. Apple fritters are donuts in their own way and by many similar definitions. But at the end of the day, you can call it what you want — it doesn’t take away from their delicious flavor and soft, chunky texture!

How To Make Tea Without Tea Bags

How Much Tea Is In A Tea Bag?