How To Store Bread Pudding 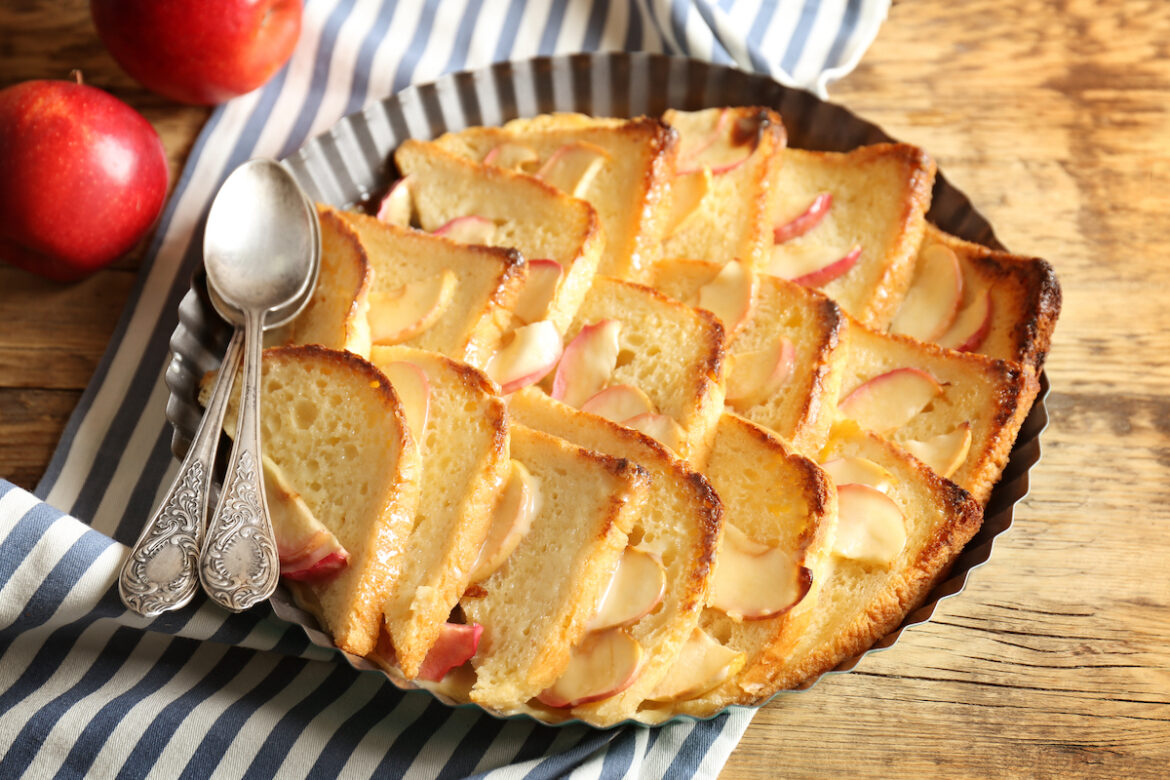 Bread pudding is the ultimate comfort food, and one of the real treats in life! This simple but decadent dessert ticks all the boxes – sweet, creamy, moist, and absolutely delicious.

But what if you’ve got some left over—what is the best way to store bread pudding? Bread pudding should be stored in the refrigerator, as it contains a large proportion of dairy ingredients such as milk and eggs. It should be placed in an airtight container or bag, along with some paper towels to absorb excess moisture.

If you’ve made far too much bread pudding and want to save the leftovers, keep reading to find out the best way to preserve the quality of this traditional dessert!

What Is Bread Pudding And How Is It Made?

Bread pudding is thought to have been created as a way of making use of excess bread, and we’re delighted that something so indulgent has come out of the need to use up leftovers!

This delicious dessert is made with stale bread, soaked in other ingredients to create a cakey, gooey treat.

To make bread pudding, stale bread is sliced or cubed before being placed in a greased oven dish.

Over this is poured a mix of milk or cream, eggs, and oil or butter. This is the basic concept, but, as always, there are many different tweaks to this popular dish!

Firstly, bread pudding can be either sweet or savory. Most of us are familiar with bread pudding as a dessert, but in some countries, it is served as the main course!

A savory bread pudding will normally contain salty additions such as ham, sausage, and strong cheese.

For the sweet version, sugar, honey, or syrup is added, along with a mix of warming spices like cinnamon, nutmeg, mace, or vanilla.

Dried fruit and nuts are added in between the layers of bread, or alternatively, a fruit loaf can be used instead of plain bread.

The key to a good bread pudding is to let the liquid ingredients soak into the bread before baking it in the oven. When cooked, the pudding should be moist but firm enough to slice into squares for serving.

Leftovers can be eaten cold or reheated, and many people think that this dessert tastes even better the second time around!

If you’ve got leftover bread pudding, you’ll want to store it in the right way to keep it in the best possible condition. This dessert is too good to waste, so it deserves a little bit of care and attention!

The problem with bread pudding is that the cake-like texture can deteriorate if not stored correctly. It can either turn mushy and soggy or become dry and unpleasant.

Now, we wouldn’t normally recommend storing a cake in the fridge, as cold air will soon ruin the texture of any cakey desserts.

But when it comes to bread pudding, the chiller it is, the better the place to keep your leftovers in pristine condition!

The reason for this is that bread pudding is very moist, and contains high amounts of sugar, fats, and dairy products.

This combination is the perfect breeding ground for bacteria, and mold will soon develop on bread pudding that is left out at room temperature.

So, the refrigerator is the best place for your leftover bread pudding, but how do we keep it in perfect condition? Nobody wants the disappointment of bread pudding that has turned soggy or stale!

The secret to keeping leftover bread pudding in the same condition as when you lifted it out of the oven is to keep it in an airtight container, but without allowing too much moisture to build up.

This is easier than it sounds, and just a few simple steps will keep your bread pudding tasting as good as new, even after several days!

Here it is – the ultimate guide to keeping your leftover bread pudding in pristine condition, ready to enjoy at a later date!

It is essential to allow your bread pudding to cool completely before wrapping it up for the refrigerator. If you wrap warm bread pudding, condensation will build up inside the container, inevitably leading to a soggy dessert.

The easiest way to do this is to leave the bread pudding in the container it was baked in, and place it in a cool, dark place. If you are worried about flies or other contamination, lay a dry kitchen cloth over the top.

When the bread pudding is cool, you may want to slice it into individual portions. Bread pudding can be chilled and reheated whole, but if you will be reheating just one or two pieces at a time then it is easier to cut it into chunks first.

There are two enemies when it comes to bread pudding – air, and moisture. This means that your leftover bread pudding should be tightly sealed in an airtight container, to prevent it from going stale.

The best container to use is a rigid lidded container, such as a plastic Tupperware tub. Select the smallest size possible to keep the air inside the container to a minimum.

If you are going to reheat your bread pudding in the oven or microwave, it is a good idea to use a container that is also suitable for reheating.

If you don’t have a suitable container, in a pinch you can use plastic wrap or a Ziplock bag. However, this can get messy, especially if your bread pudding is a bit on the soggy side!

Alternatively, you could keep the bread pudding in the oven dish it was baked in, and wrap this with plastic wrap. This won’t be as effective as using an airtight container, but it is a good backup option.

So, we’ve got our bread pudding safe from air, but this creates another problem – we’ve locked in all that moisture too!

Whilst we don’t want our bread pudding to dry out, sealing in all that moisture will inevitably lead to the base of the dessert becoming soggy and unpleasant.

The secret to preventing this is to use something to absorb the excess moisture. Pop a few sheets of paper towel inside your container underneath the bread pudding, to soak up any excess condensation that builds up.

If you are using plastic bags or wrap, place a sheet of paper towel inside the bag or wrapped around each portion of bread pudding.

4. Place The Bread Pudding In The Refrigerator

Now, we don’t want to sound finicky, but if you’ve gone through all this trouble then the final step is to put your container in the fridge correctly!

Baked goods such as bread pudding can easily absorb strong odors and flavors from other foods in the fridge and should be placed as far away from anything that may taint it as possible.

This means you really shouldn’t keep the bread pudding next to strong cheese, garlic, onions, fish, or anything smelly!

How Long Can Bread Pudding Be Stored In The Fridge?

The good news here is that bread pudding lasts for up to four days in the fridge – that is four whole days where you can enjoy a slice of leftover bread pudding!

It will slowly deteriorate over this 4-day period, but not to the point where it is inedible. You might notice that it is a bit soggier on the final day, but it will still taste as good as before.

But what if you can’t eat it all in four days – are there any other options for storing bread pudding for longer? Let’s find out!

Other Ways To Store Bread Pudding

The good news is that you can also store bread pudding in the freezer, so if you aren’t going to eat it all within four days then you’ve got a backup option!

You might notice some changes to the texture of bread pudding when it has been frozen, but the high moisture content means that it freezes better than many other cakey desserts.

To freeze bread pudding, it can be prepared in exactly the same way as described above.

Remember to make sure that your containers are suitable for the freezer (like these ones), and if you’re using plastic wrap, it’s a good idea to add an extra layer to prevent freezer burn.

Individual portions should be wrapped separately, as otherwise, they will stick together in the freezer. Label the bread pudding with the contents and date before placing it in the freezer.

Bread pudding can be frozen for up to 6 months, but we’d suggest eating it within 3 months to enjoy it at its best.

That shouldn’t be a problem with something as delicious and moreish as bread pudding!

Up Next: What Dish Goes Well With Waldorf Salad?