Griddle Vs Skillet – What’s The Difference? 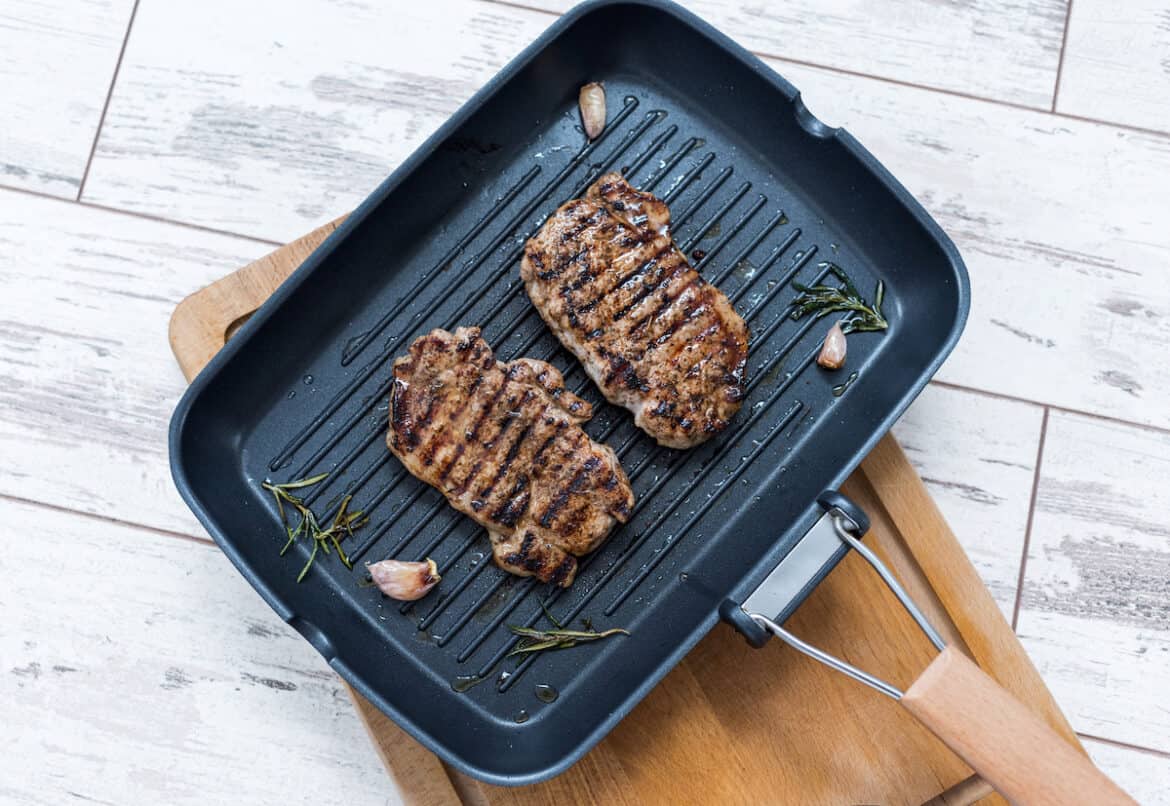 Depending on where you are from, you may use the terms griddle and skillet interchangeably. However, there are technical differences between griddles and skillets. There is even a difference between types of griddles.

Having one of those fun debates where you decide that to prove your point you need to use the internet? Well, you have found the right article. Read on to learn that there really is a difference between a griddle and a skillet.

What Is a Griddle?

Defining what a griddle is can be slightly more complicated than defining what a skillet is. That is because there are technically two types of griddles.

A griddle pan is usually in the shape of a rectangle or square. The flat verison sare designed for even cooking. Think pancakes.

Griddle pans are designed with lower walls and are also great for cooking steaks, eggs, and burgers. The ones with a flat surface are for cooking things that have an even thickness.

Griddle pans are often made from cast-iron or other non-stick materials. Most griddle pans with handles tend to be flat and are best used for pancakes and eggs.

Griddle pans are not always flat. In fact, most of the time, they have ridges that are meant to mimic the grill grate lines. There are even grill/griddle combos on the market for the best of both worlds.

Griddle pans like this are also designed so that the fat from what you are cooking runs down the wells.

The griddle pans that are designed with ridges and wells for fat drainage tend to be designed to be placed over direct heat.

A griddle plate is a whole different thing.

Griddle plates are almost always flat, sometimes they are even called flat-tops.

You have seen these at sandwich places or breakfast places before.

You may also have an electric one at home that you take camping or use on Sundays to make a giant family breakfast.

Griddle plates are designed to transfer heat evenly across their surface and will have a reservoir for grease to drain into. They are also designed for high-heat cooking.

What Is a Skillet?

A skillet is often mistakenly referred to as a frying pan. Skillets are rounded and have deeper sides.

These pans are suitable for frying or in situations where you do not want the fat to run off. They can also make a mean steak.

Skillets are usually made from cast-iron, but you may be able to find them in other non-stick materials that are lighter than cast-iron.

The high sides also mean that cooking flat or very thin items can be difficult. It would be very hard to flip a pancake in a skillet, whereas with a steak you can use a utensil like tongs to flip and rotate the steak.

Skillets tend to be used for slower cooking techniques. This means methods like frying, baking, or roasting. They can also withstand high heat cooking, but typically with foods that will need some oven time after they get a nice sear.

A thick, juicy steak, for example, could be seared in the skillet with high heat while it is on the stove.

Then you could flip the steak over, add some butter and a little rosemary, and stick it in the oven to finish cooking. A little salt and pepper, and bam! Ok, back to griddles and skillets.

Is a Griddle the Same as a Skillet?

No, a griddle is not the same as a skillet.

If we are talking about griddle plates, that is, the electric or gas-powered flat-tops that you find at many lunch or breakfast places and can buy at camping stores, then there are zero similarities between these types of griddles and skillets.

Griddle pans, on the other hand, can have some similarities to skillets. While griddle pans often tend to be ridged, some of them can have a flat surface, making them similar to a skillet.

There are many griddle pans that do not have handles but instead have grips on the side and have ridges designed to leave grill marks and drain fat from the surface. These have virtually no similarities to skillets.

Even if you are comparing a flat griddle pan with a handle to a skillet, there will be two key differences. First, griddle pans are usually square or rectangular.

Second, griddle pans are designed with low walls. Skillets have high walls and are almost always round.

Skillets are best used for frying or cooking methods that may involve transferring from the stove to the oven. They can handle high heat but are also ideal for slow cooking methods like roasting or broiling.

Griddles are designed for fast, high heat cooking and typically do not get placed in the oven. Some griddle pans may be cast iron and can go into the oven, but with the low walls, there is a risk of fat or other liquids running off into the oven.

Can You Use a Skillet on a Griddle?

You may not have the best heat transfer, but if you are camping or need to let something cooking in a skillet rest, or slowly continue to cook, then placing a skillet on a griddle plate is an option.

You would never put a skillet on a griddle pan. That is a disaster waiting to happen.

Not to confuse the matter, but you can technically put a skillet, a flat griddle pan, and a ridged griddle pan on top of a griddle plate.

Try to think of a griddle plate as a piece of cooking equipment. Either imagine it as a grill with no slots, or a stove where the entire top heats up (not just the rings).

Since a griddle plate is more of a cooking surface than a piece of cookware, you could technically put any type of pan on it.

The heat transfer may not be as intense as using a stove where all of the heat will be directed into the pan, but this could be useful in some situations.

Restaurants will often place pans (skillets/frying pans, griddle pans, sauté pans) on top of griddle plates to keep them warm, or in some cases, to slowly continue the cooking process.

This is a great way to make sure items come out at the same time or to slowly finish a steak without overcooking it.

If you made a sauce that required you to top it with butter at the end, then you may want to rest it on a griddle plate to keep it warm enough that it will not break but cool just enough that the fat and water content will not separate.

This would likely only be useful if you have one of the griddle pans that are designed with ridges.

If your griddle plate can produce enough heat, and say you were camping and really wanted grill marks or wanted to avoid too much grease in your burger, you could place a ridged griddle pan on top of an electric or gas-powered griddle plate.

We hope this was not too confusing. We certainly understand that it can be. After saying griddle and skillet enough, you may think we’re speaking in riddles.

The best way to remember the differences between a skillet and a griddle is to think about what you are cooking.

Fort a real comparison, you’ll have to ignore griddle plates, which are more like a grill or a stove. It is a piece of cooking equipment, as opposed to a piece of cookware.

Skillets are great for frying and slow cooking methods that may involve the oven. Griddles are great for high heat cooking over direct heat and food items that are flat and even.

Skillets for fried chicken, griddles for pancakes and eggs. Don’t worry, there won’t be a test.

Up Next: Warped Pans – Why It Happens and How to Fix It