Home Foodsguy Funnel Cake Vs Fried Dough – What’s The Difference?
FoodsguyThis vs That 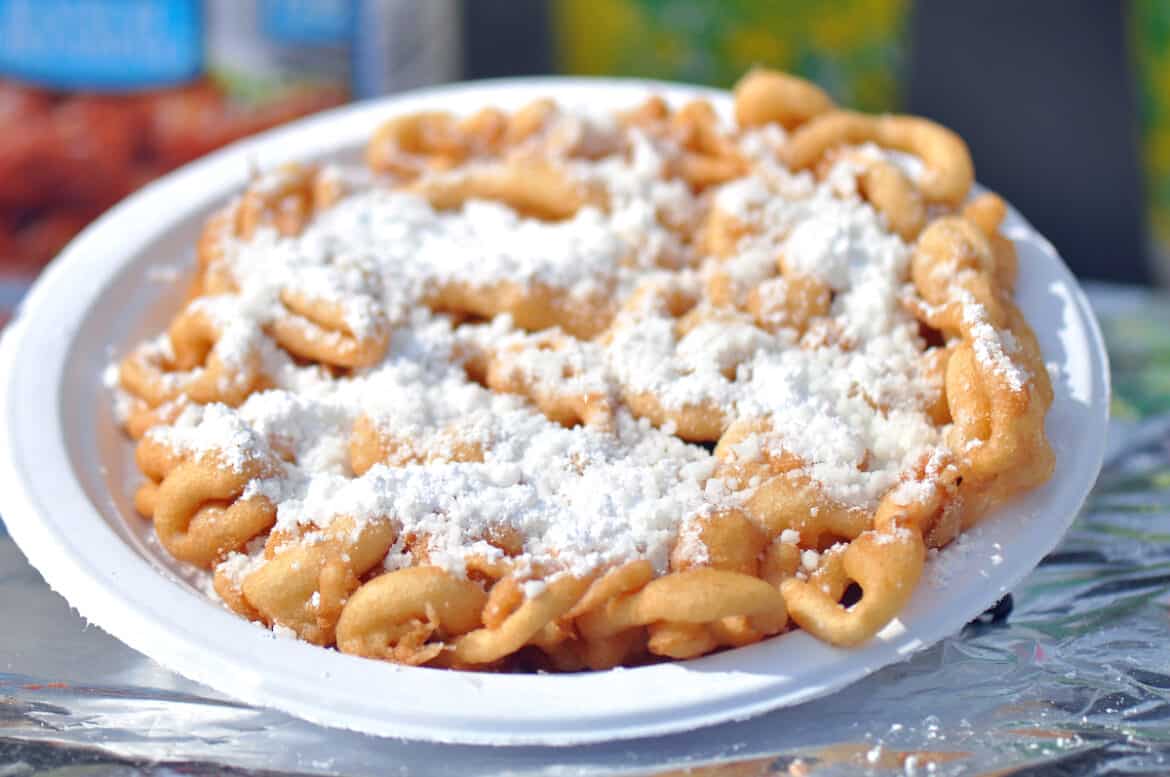 Few scents can bring you back to a specific time and place more effectively than the heavenly fragrance of frying dough mixed with sugar and cinnamon.

The combination brings to mind fairgrounds, amusement parks, and general summertime joy. At one point or another, most of us have indulged in some type of warm, chewy, sugary pastry.

Depending on where you live, the particular type of fried treat may be different to what others are more familiar with. If you’ve come across a name you’re not quite familiar with, you may be wondering:

What’s the difference between funnel cakes and fried dough? Though funnel cakes are technically a type of fried dough, there are a few differences that separate it from other versions. This biggest difference is that they are made with baking powder, rather than yeast dough.

In this article, we’ll take a closer look at multiple different types of fried dough and what makes them great, as well as what makes funnel cakes different from the rest.

What Is Fried Dough?

Fried dough is exactly what it sounds like – dough that has been deep-fried. It has been a part of North American history for generations, with fry bread, or bannock, being a staple of Indigenous peoples’ lifestyles.

More popular today, however, are the sweetened fried dough treats that are found at nearly every fair, amusement park, and coastal walk or pier.

This type of fried dough is generally made with a standard, risen yeast dough. The deep-frying will create bubbles and unique shapes.

Depending on the type of fried dough, how, and where it’s being made, there are many different ways to create the batter.

Fried dough can be made in many different ways and is popular in a variety of different cuisines, so it can also be called by a number of various names.

As previously mentioned, in Indigenous North American culture it is commonly called bannock, or fry bread.

Canada has iconic beaver tails, Italy has zeppole, and Germany has knieküchle – nearly every country has some version of fried dough.

We’ll be discussing funnel cakes in just a minute, but elephant ears, doughnuts, fritters, beignets, and doughboys, are all variants of fried dough.

The signature feature of “fried dough” is that it is made with yeast dough. If it is made with baking powder or any other type of dough that does not include yeast, it will generally have its own specific name or qualification.

Fried dough is usually topped with something sweet, though you can also get or make savory fried dough, depending on your preferences.

Some of the most common toppings for fried dough include:

What Is Funnel Cake?

Funnel cake is a creative take on fried dough, originally developed by the Pennsylvania Dutch immigrants who came to North America in the 1700s.

The original cake was a type of yeasted fried dough called drechderkuche, but in 1879, when the first version was developed using baking soda instead of yeast, a new name was born: funnel cakes.

They’re called funnel cakes because the dough batter is poured through a funnel in a circular pattern into hot oil.

Once they’re cooked to a beautiful golden brown, they’re pulled out of the oil and covered with toppings, most commonly powdered sugar.

Funnel cake and elephant ears are two of the most popular types of fried dough in the US.

They’re found at nearly every entertainment grounds, whether it’s a festival, carnival, or year-round fairgrounds. They share a lot of similarities but are different foods.

Funnel cakes, as we’ve just defined, are made with baking powder batter rather than yeasted dough.

Elephant ears, on the other hand, are made using a dough very similar to a pizza dough that has been flattened, rolled, cut, and re-flattened, creating a thin cinnamon roll-like dough that then gets fried.

Funnel cakes are poured through a funnel to create stringy, overlapping circles of dough forming a doily-like pattern that melds together in the hot oil.

Funnel cakes are very pretty and delicate looking, though kind of lumpy, compared to elephant ears, which are named appropriately. Elephant ears are thicker, larger, heavier, and more substantial overall.

Funnel cakes can be messier though, and you have to be more strategic about the toppings you choose because syrups and jams will quickly start dripping through the lacey holes.

Elephant ears are more solid and can hold up to heavier, messier, or more varied toppings.

In Canada, beaver tails are the national equivalent to elephant ears. They’ve become so popular that there are restaurants dedicated exclusively to this specific type of fried dough.

Very similar to other types of fried bread, sweet toppings such as powdered sugar are the most common for funnel cakes, however, you can dress them up in many different ways.

Because they’re so light, funnel cakes make a great garnish for ice cream dishes, fruit salad, custard, pudding, or any other type of soft dessert.

If you’re making your own funnel cakes, you can also add spices to your batter, adding even more flavor and variety to your signature treat. Warm spices like cinnamon, ginger, or allspice taste delicious baked into the fried dough.

You can use all the same toppings as previously listed for fried dough, or come up with unique flavor combinations of your own. Just remember to watch out for the holes!

As funnel cakes became more and more popular, restaurants wanted to jump on the growing trend and began to bolster their dessert menus with a simple twist on a classic funnel cake.

Depending on where you’re eating, you can often find funnel cake sticks or fries on the menu, served like a side order of fries but with powdered sugar instead of salt and seasoning, and a sweet dipping sauce in place of ketchup.

Of course, you can also create this sweet treat at home with all your own favorite toppings and accoutrements.

If you’ve ever made the traditional style of funnel cakes before, you’ll just have to adjust your pouring style.

Rather than moving your funnel in circles over the hot oil as you pour the batter in, simply create straight lines, approximately as long as you want your fries to be.

Can You Make Funnel Cake With Bisquick?

If you’re making funnel cake or funnel sticks at home, you’ll probably notice the batter is very similar to what you might use for pancakes.

Remember, funnel cakes are made from non-yeasted dough batter, which Bisquick is perfect for.

You’ll want to make sure that your batter is thicker than the average pancake batter but thin enough to still flow easily through your funnel.

Not only can you use Bisquick to make funnel cake, pancakes, and biscuits, but there’s actually a whole list of foods you can make easily with this versatile mix.

Here’s a video from the Allrecipes channel on YouTube explaining 19 amazing ways to use bisquick!

If you are at a fair or special event and you see funnel cakes or another type of fried dough available, it is highly unlikely they will be vegan unless specifically, and probably very visibly, noted.

Most dough batter, whether with or without yeast, will contain dairy, eggs, and sometimes even lard. Depending on the recipe, fried dough or funnel cakes may be vegetarian.

Even if the dough itself is made free from animal products, it’s always good to check if the oil used to fry the dough is used for any other products that may contain non-vegan ingredients.

If you’re craving funnel cake or fried dough and you’re vegan, you can make this delicious dessert at home with just a few simple swaps.

There are also many vegan binding agents that you can use to replace eggs. The easiest for funnel cakes or fried dough is probably flax or chia seeds, which will also add a hint of nutty flavor and some great nutritional value.

Can Funnel Cake Batter Be Refrigerated?

Yes, if you like to make a large batch of funnel cake batter so that you can have it ready for surprise visits and weekend treats, you can make the batter ahead of time and refrigerate it for 3-5 days.

You’ll want to make sure that it is kept in a well-sealed, air-tight container and you may have to give the batter a stir or shake before using it, but as long as there are no odd smells or suspicious colors in the mix, you should be safe to fry on demand.

Can I Make Fried Dough With Pizza Dough?

You can make fried dough using pizza dough, though you’ll want to make sure it is conventional pizza dough and not a speciality variety, like cauliflower dough, which cooks much differently and won’t have the same texture or flavor.

Store-bought or homemade pizza dough can be shaped or rolled in a variety of ways to make the type of fried bread you’re craving, served with the toppings of your choice.

Depending on the size and thickness of the dough you’re frying, you can use either traditional deep-frying methods, or you can try shallow frying in a deep-sided, heavy-bottomed pan.

Up Next: Recipe – Funnel Cake Cupcakes

Can You Eat Soft Potatoes?

How To Reheat Pulled Pork – Step By...

15 Fruits That Start With G