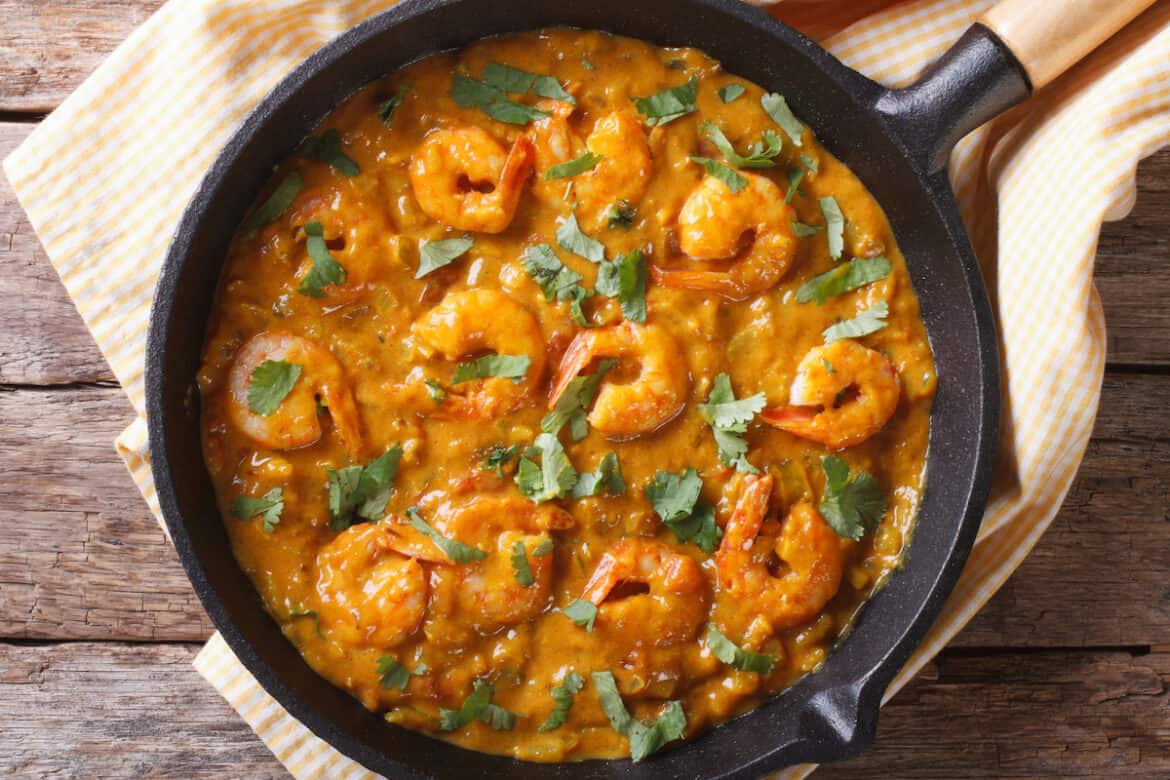 Whether you are allergic to shellfish, don’t like shrimp, or are vegan, there’s no reason to miss out on delicious recipes involving shrimp. You can make the same dish using one of many shrimp substitutes.

Continue reading to learn more about shrimp substitutes and how to pick one that will fit your favorite recipe best.

Is There a Substitute for Shrimp?

Shrimp, along with crab, crayfish, and lobster, belongs to the crustacean family and is probably one of its most popular members.

The popularity of shrimp has to do not only with the fact that it is widely available but that it is a very versatile ingredient too.

You can find shrimp in your local supermarket. Depending on where you live, you may have access to fresh shrimp when it is in season. However, now you can also buy shrimp that is already cooked or frozen to have a longer shelf life.

As versatile as shrimp is, sometimes you don’t find fresh shrimp at your local market and need to find a substitute that will add a similar texture, flavor, and overall feel to the dish.

Shellfish allergies are another reason why one may want to skip the shrimp in the dish and add another ingredient instead.

Or it may be that you don’t like shrimp but want to try out popular dishes involving shrimp without having to sacrifice the flavor and aroma of the dish.

Luckily, there are numerous shrimp substitutes you can choose from, both vegan and non-vegan.

Here are seven shrimp substitutes you can choose from. Even if you have a shellfish allergy or want to skip the seafood altogether, you will find an option that will work for you.

Langostino tails are one of the best substitutes for shrimp. Langistino is a Spanish word used to refer to the meat of the squat lobster. This is a long-tailed crustacean that looks like a mix between a lobster and a crab.

The flavor and texture of langostino tails are similar to that of shrimp. They even look similar to shrimp, which makes them a perfect shrimp substitute for people who are not vegan and don’t have shellfish allergies.

Thanks to its sweetness and classic seafood taste, lobster meat is a good alternative to shrimp. We recommend using lobster tails for the best results.

While lobsters are on the pricier side, they will work well in many recipes involving shrimp.

As scallops have a springy texture when done right, a hint of fishy flavor, and are slightly buttery and sweet, they make a great substitute for shrimp.

Use scallops in dishes where you won’t be cooking them so much as to mess up their texture. Deep fry scallops, sear them or cook them with the popular lemon butter sauce often made for shrimp.

Crayfish is a great shrimp substitute for those who don’t have a shellfish allergy. It is sweet and salty, with a texture similar to the texture of shrimp. You can use crayfish as a substitute for shrimp in shrimp cocktails.

Surimi is a widely-used ingredient in Asian cuisine. It is essentially fish paste that comes in different shapes and forms.

Surimi is often referred to as imitation crab for its flavor that resembles that of crustaceans, including crab and shrimp. The texture is similar to the texture of shrimp too, but closer to crab.

If you are allergic to shellfish, check the ingredients to make sure there isn’t any crustacean meat in the surimi you have purchased.

If you are allergic to shellfish, chicken is one of the best options that will work as a shrimp substitute.

We recommend using chicken breast, as it is easy to infuse it with your desired flavors. Cook chicken breast until it’s tender when using it instead of shrimp.

White fish is another great shrimp substitute option for people with a shellfish allergy.

You can use any firm white fish variety you like, from halibut to cod. However, keep in mind that the flavor profiles of these fish are different. Take it into account when using them.

While there are lots of non-vegan substitutes for shrimp, there are a few great options for those who eat neither seafood nor meat.

Fake shrimp is one of the best shrimp substitutes not only for vegans but for everyone as its texture flavor, and appearance are very similar to real shrimp.

It is made of algae (aquatic plant-like organisms) and other aquatic plants for a similar sea-food flavor.

King oyster mushrooms are a great vegan substitute for shrimp. They have a similar soft and crunchy texture and an even higher nutritional value than shrimps.

Cut king oyster mushrooms into pieces resembling shrimp and use them in stir-fry recipes.

Tofu works well as a shrimp substitute for vegetarians, as it has a texture similar to that of shrimp and can be used successfully in many recipes.

When replacing shrimp with tofu, make sure it has a soft texture. Firm tofu will not work well for this purpose. Drain tofu and cut it into cubes if you intend to use it in a recipe instead of shrimp.

Another vegan substitute for shrimp is sweet potatoes. However, you will have to put in some effort to make sweet potatoes feel like shrimp. Here’s what you should do.

First off, make some sweet potato puree and combine it with a small amount of oil, garlic powder, and paprika to taste.

Then, add gluten flour to the puree so that it reaches a dough-like consistency. The mixture should be kneadable and smooth. However, the longer you knead it the tougher it will become.

What you should do next is flatten the dough and cut it into strips that are half an inch thick and two inches long. Don’t make the strips any bigger, as when you cook them they will puff up a bit.

To give this vegan shrimp a hint of true shellfish flavor, make broth by combining water, salt, and seaweed. To cook this sweet potato vegan shrimp, put the strips in the cold broth and let them come to a boil.

Let the vegan shrimp cook in the broth on medium heat for around half an hour. When the shrimp is cooked, it will float.

Serve your vegan shrimp with cocktail sauce, garlic-infused butter, or any other way you like to eat real shrimp.

How to Choose a Shrimp Substitute?

Choose a shrimp substitute depending on your needs and preferences. The reason why you want to substitute shrimp with another ingredient will help you decide which option to go for.

If you have a shellfish allergy and that is why you want to exclude shrimp from the recipe, go with an option that won’t cause you any health issues, such as firm white fish.

If you don’t have enough time for preparation, pick something that doesn’t require any prep work, such as another canned shellfish variety.

You may also need to look for a shrimp substitute if there is no fresh shellfish where you live, you are vegan, or find shrimp to be too expensive.

In any case, substituting shrimp with another product without sacrificing the flavor of the dish is possible.

If you want to test any of these out for yourself, we recommend trying our delicious recipe for creamy mozzarella shrimp pasta and substituting the shrimp with a food of your choice!

The options are limited but still available for those looking for a vegetarian or vegan shrimp substitute.

When picking a vegan substitute for shrimp, consider how fitting it will be in the particular dish you are making and if it will pair nicely with the rest of the ingredients in the dish.

What Can You Substitute for Shrimp in Shrimp Scampi?

Shrimp scampi with a mouth-watering sauce made with garlic, lemon, and butter tastes heavenly.

However, not everyone can or wants to eat shrimp. Luckily, you can substitute shrimp with other ingredients and the dish will turn out equally as delicious.

As scampi is a dish that implies serving shrimp in garlic butter, wine, and cheese, on a bed of pasta or with bread, substituting the main ingredient with another protein certainly won’t destroy it.

You can make your version of scampi by substituting the shrimp in it with clams or scallops. As a non-seafood option, chicken breast will work beautifully.

Vegans have multiple shrimp substitutes in scampi too, including oyster mushrooms and imitation shrimp.

Why not try one of these with our recipe for shrimp scampi without wine?

What Can You Substitute Shrimp for in Paella?

While seafood paella is many people’s favorite, you don’t have to have seafood in it all the time.

In fact, you can skip the seafood altogether. So long as you get the rice in the paella right, your dish will feel as traditional as you want it to.

But here’s what you can substitute shrimp in paella. If you want to stick to seafood, you can use clams or mussels.

A winning combination would be mussels paired with squid and rabbit. Chicken and chorizo are a great combination if you want to skip on seafood for the moment.

Up Next: Creamy Mozzarella Shrimp Pasta