Can You Freeze Summer Sausage? – The Best Way 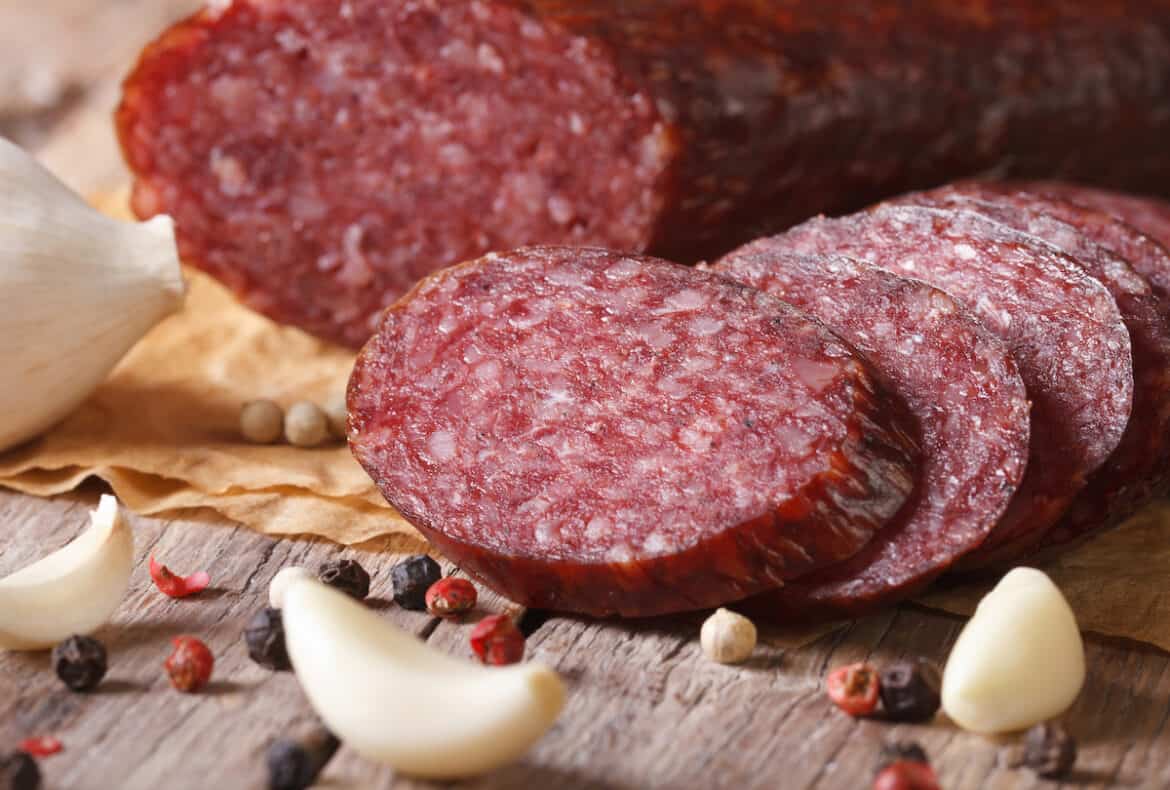 Meat is perhaps one of the most widely consumed food products in the world today. It is our primary source of protein after all. Unsurprisingly, there is a myriad of different ways to prepare meat.

For instance, curing has been the most effective way of ensuring that meat doesn’t go to waste. For the longest time, this was the most effective method, at least before refrigeration was invented. A perfect example of this is the summer sausage.

Want to know more? This is precisely the matter that we’ll delve into here. So keep reading!

What Is Summer Sausage?

Now, if you are like us, you may have found the term ‘summer sausage’ a bit odd. Specifically, why are they called that? Well, to answer that, we need to take a look back at its origins and how it was originally used.

Keep in mind that summer sausages came about prior to the development of refrigeration. Meat and game were very precious.

So, the people in Europe needed to do something that would let their food last through the summer months. This is where it gets its name—summer sausage.

Making use of different types of preservation methods, summer sausages are essentially a type of cured meat. They come in several forms that you are probably familiar with.

In fact, some of the well-known sausages on the market today fall under this category. The most well-known include the Spanish chorizo, salami, and pepperoni.

However, in the U.S., the most popular form of summer sausage follows what has come to be known as the traditional German-style sausage.

Originally brought over by German immigrants, these summer sausages are noticeably softer and less dry. Traditionally, families had their own special recipes and followed specific ways to make these sausages. These recipes were passed down from one generation to the next.

Of course, while specific recipes may vary. The basic set of ingredients for the summer sausage stays the same with salt, pepper, beef, and pork taking center stage.

Now summer sausages enjoy popularity with people from all walks of life. For some, it has even become a staple for Christmas dinners.

Nowadays, you can get your summer sausage fix by buying them from the supermarket.

However, the general process behind making them has pretty much stayed the same. Sausage manufacturers take the meat and other ingredients and mix them with an assortment of curing agents.

The characteristic tangy flavor is another side effect of this process. The mixture is then stuffed into casings and hung to dry.

Summer sausages are categorized by the USDA as semi-dry sausages. This is because summer sausages lose 15 percent of their original moisture content during the fermenting and pre-packaging process. In some cases, they are also smoked.

In the end, you end up with a sausage that has a semi-soft texture which makes it easy to slice and serve.

Our understanding of food science has certainly come a long way. While summer sausages were originally made to last despite the lack of readily-available refrigeration, it certainly helps that we have a handy fridge to stick them in to make them last longer.

Remember, while there are some sausages that are perfectly safe to store out of the cooler, they are more exceptions rather than the rule.

That said, it would be wise to always check the label for instructions.

For instance, there is a stark difference between sausages that “need refrigeration” and those with labels that state “refrigerate after opening”.

The former means you should toss those sausages directly in your fridge while the latter states that they can be safely stored in the pantry before you decide to use them.

Just be sure to keep an eye for any signs of spoilage.

The best way to do so would be to look at your summer sausage to see if there are any changes to its appearance. The growth of mold is definitely a red flag. You can also smell them to check if they are still good. If you notice an odd odor, then it is time to get rid of them.

To maximize the shelf life of any type of food, including summer sausages, refrigeration is still your best bet.

However, it should be stated that despite the effectiveness of refrigeration, freezing is the best way to go if you want to ensure that your summer sausages will last as long as it can. In fact, if done properly, you can freeze your sausages for as long as 10 months.

Take note that if you haven’t taken the summer sausage out of its original packaging, then you can still do the steps presented above.

Instead of an individual sausage, you’ll need to wrap the original packaging with your freezer paper. Alternatively, you can also make use of a sheet of foil.

As a general rule, when you are about to use the summer sausage, be sure to properly defrost it first. Take note that the keyword is properly.

Failing to do so could lead to bacteria and a host of diseases finding home in your summer sausage.  There are a couple of ways to do this. You can follow whichever method you prefer, just be sure to follow the steps outlined below.

Thawing Summer Sausage In The Microwave

The first method makes use of your microwave to thaw the sausages. While undoubtedly the fastest way to go about this task, you have to be extra careful. Otherwise, you could end up burning the sausages.

Just put your sausages on a microwave-safe plate and use the defrost setting. Do this until you can separate the sausages from each other using a fork.

Alternatively, you can set your microwave to its 50% power setting. Open the microwave after 3-4 minutes and check with a fork if you can separate the sausages from each other.

Keep repeating the process until the sausages are no longer stuck to each other. Be sure to check every minute or so to ensure that they are defrosting properly.

Once they separate, you will need to microwave them again. This time, do it with 2 minutes intervals until they are fully thawed.

Cook them immediately once you are done defrosting in order to prevent the build-up of any bacteria.

Thawing Summer Sausage In The Refrigerator

This method is the simplest yet it takes a considerably longer time. So, before anything else, you will need to ensure that your fridge’s temperature is below 41 °F or (5 °C).

This is crucial because a higher temperature will allow bacterial growth.

Put the sausages on a plate and place it at the bottom of your refrigerator, away from other ready-to-eat food. Remember, you need that plate to prevent the sausages from getting soaked as it thaws.

You’ll know if you’re done once the sausages are soft to the touch and are free of ice.

Take note that you need to have enough patience if you’ll be using this method to thaw your summer sausages. It is a straightforward process but it takes up a lot of time.

For instance, if you are thawing large batches, then you may end up waiting around 24 hours before they fully defrost.

So, there you have it. We presented everything you need to know about freezing, storing, and thawing summer sausages. Hopefully, by following our guide, you won’t ever have to deal with spoilage ever again. So, always keep these tips in mind.

Up Next: Can You Freeze Chorizo?

The Best Oil For Salad Dressing

Can You Freeze Boursin Cheese? – The Best Way