Home Foodsguy Can You Freeze Cauliflower Cheese? – The Ultimate Guide
FoodsguyFreezingHow To

Can You Freeze Cauliflower Cheese? – The Ultimate Guide 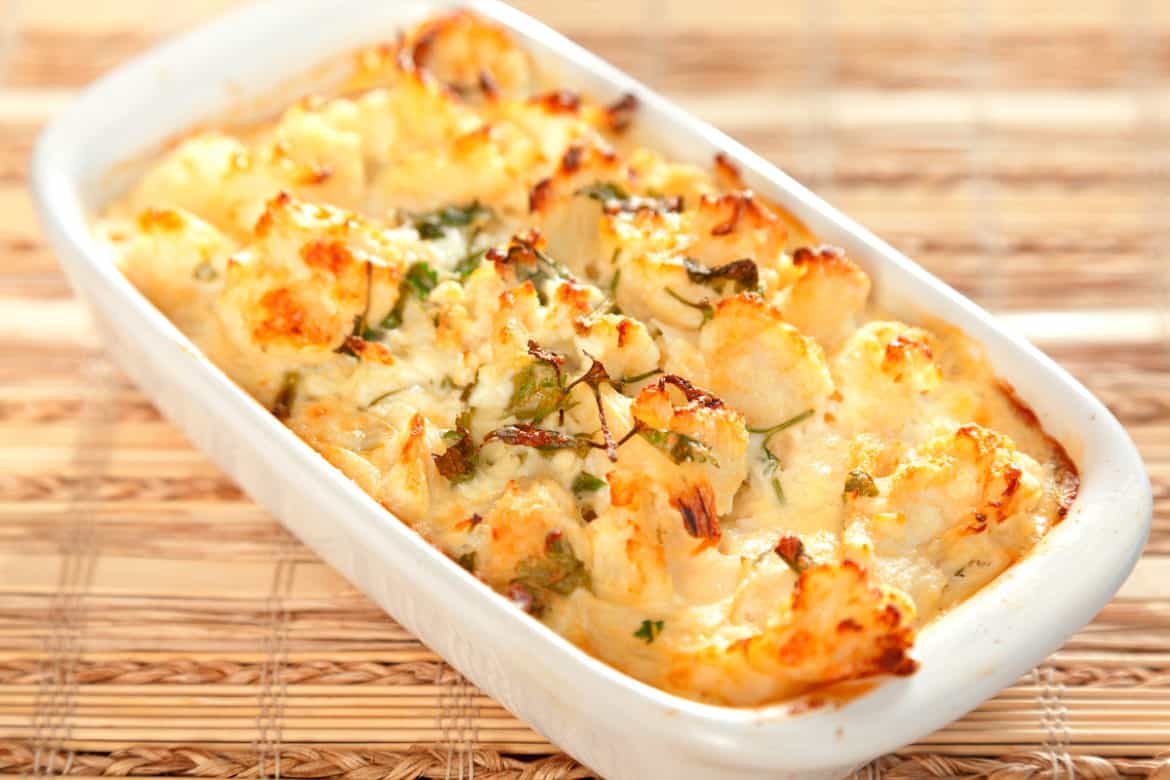 Cauliflower cheese is, for many people, very nostalgic comfort food. It’s probably something your mom used to make from a recipe that was handed down through the generations. It’s rich, creamy and made with cauliflower, so it must be healthy, right?

If you’ve made a large casserole and you have some leftovers you may be faced with the question of what to do with the rest.

If this is simply not an option, this article will walk you through the steps you need to take to freeze your cauliflower cheese for the best results possible.

The Ultimate Guide to Cauliflower Cheese

Cauliflower cheese is a traditional British dish of cauliflower florets that have been smothered in a creamy cheese sauce and baked to perfection.

The Brits have a little bit of a reputation for enjoying their vegetables boiled slightly longer than is common among Americans, but when cauliflower is baked it becomes perfection, no matter who’s eating it or what country you’re living in.

The cheese sauce is traditionally made with strong or mature cheddar, melted into a blend of milk, butter and a bit of flour to thicken the sauce. Some cooks will sprinkle breadcrumbs and/or paprika on the top before baking to add a little texture and a pop of flavor.

It’s baked for about 20 minutes at 400F and usually served as a side dish.

If you’re determined to freeze your leftover cauliflower cheese, you should be prepared for some changes in the reheated version.

Cauliflower has a lot of water in it, which means that when it freezes and thaws, it tends to lose its firmness, even if frozen raw.

Your casserole will likely be softer the second time around, but that doesn’t make it any less tasty. Dairy also has a habit of separating when it is frozen. The look of your dish will also have some changes, but the flavor will all still be there.

As soon as you know you’re going to freeze your leftovers, you want to freeze them, assuming the dish is completely cooled down. The longer the cauliflower soaks in the sauce, the more moisture it will retain, causing large ice crystals to form inside the vegetable when it freezes.

When it thaws, this is what turns the cauliflower to mush. Also, the longer your dish sits, the more time your sauce has to separate. If you freeze it quickly, the highest level of freshness and quality can be preserved.

2. Freeze in a Freezer AND Oven Safe Dish

When you’re ready to reheat and eat your cauliflower cheese, you’re going to want to put it directly into the oven from frozen. This means you’ll need to freeze it in the same dish it’s going to bake in.

When you cook it in the first place, if you have any suspicion you’ll be freezing leftovers, simply bake it in a dish that is also safe for the freezer.

You want to prevent as much air and moisture from getting close to your food as possible, so even if the dish you’re freezing your cauliflower cheese in has an airtight sealing lid, you still want to cover the surface of your casserole with plastic wrap.

If your dish doesn’t have a lid, cover it with aluminum foil and then place a baking sheet over the top of that before putting it in your freezer.

But putting a baking sheet on top you won’t run the risk of anything being placed on top and ripping through the aluminum foil, breaking the seal and potentially ruining your cauliflower cheese.

Pasta does not freeze or reheat well.

If you plan on adding noodles of any kind to your cauliflower cheese, avoid freezing it. Either make multiple smaller dishes, not cooking them both at the same time so that the noodles aren’t overcooked, or simply don’t freeze your leftovers.

Pasta will reheat okay if you store your cauliflower cheese in the fridge, though it helps to prepare your dish al dente the first time it’s cooked.

Making Cauliflower Cheese in Advance and Freezing It

Making cauliflower cheese in advance and freezing it is a different situation than freezing leftovers. If this is your plan, the best advice I can give you is to steam your cauliflower only lightly and freeze it separately from the sauce.

This allows you to do 2 important things:

Storing Cauliflower Cheese in the Fridge

If you think you’ll eat your leftover cauliflower cheese within 2 – 3 days, you can store it in the fridge. Keep it in the same dish it was baked in so that it’s easy to reheat, but cover tightly with plastic wrap.

How to Reheat Frozen Cauliflower Cheese

Cauliflower cheese reheats well, but you do want to try to avoid over-cooking it during the process. Whether you’re reheating from frozen or just from chilled, you want to use your oven for the best results.

If you’re in an extreme hurry, you can transfer your casserole to a microwave-safe dish and warm it for 2 minutes or less, but there is a good chance the cauliflower will be mushy and the cheese sauce will separate.

It will still be delicious, but it won’t be nearly as pretty.

How to Reheat Cauliflower Cheese in the Oven

To reheat cauliflower cheese, preheat your oven to 400F, the same as if you were cooking it for the first time.

If you’re reheating it from frozen, you will need to let it bake for 30 minutes or until the center of your casserole is bubbling. Do not thaw your dish before reheating it as this will increase the likelihood that your cauliflower will go very soft and your sauce will be quite watery.

If you have stored your cauliflower cheese in the fridge, it won’t take nearly as long to reheat. Check after 10 minutes and you’ll know it’s ready when the center is boiling hot and the surface has its nice, crisp golden crust back.

I can’t imagine committing this mistake myself, but if you’re going to freeze your cauliflower cheese you really want to avoid forgetting about it.

The longer it’s frozen, the more the quality is going to be challenged, so be sure to take it back out of the freezer and use it within 3 months, if possible.

The next mistake is letting your cauliflower cheese defrost before reheating it. This will result in a soft, watery casserole that vaguely resembles your original masterpiece. Instead, put it directly into a preheated oven while it’s still frozen.

Finally, you don’t want to freeze and/or reheat your cauliflower cheese any more than once. Cauliflower is too delicate of a vegetable to hold up to any more temperature fluctuations and with every change, your dairy is more likely to start separating or even curdling.

Why does my cauliflower cheese go watery?

The most common reason for watery cauliflower cheese is overcooking. Cauliflower has a lot of natural moisture and the longer it’s cooked, the more the water migrates from inside the vegetable to water down your cheese sauce.

If this is a common problem for you, try baking at a slightly higher temperature for a slightly shorter period of time. This will allow you to still get a nice golden surface without overcooking your cauliflower.

What do you eat with cauliflower cheese?

Cauliflower cheese is a rich and creamy side dish, so it pairs well with a variety of other foods. Most commonly you’ll see it served with potatoes or potato wedges and meat, such as roast chicken or sausages.

It’s equally delicious with other roasted veggies, garlic toast, and salad, fish, or beans. Your imagination is really the limit.

As detailed at the beginning of this article, cauliflower cheese is a very traditional British dish made by baking cauliflower in a rich cheese sauce.

You can make this dish vegan by using vegan cheese and non-dairy milk instead of the traditional mature cheddar and milk.

To add just a little bit more confusion to the mix, there are also some vegan cheeses that are made using cauliflower. Generally, if you hear the term “cauliflower cheese” it’s in reference to the British dish.

Can You Freeze Honey? – The Surprising Truth

Can You Freeze Deli Meat? – How To Freeze Lunch Meat

Excellent article! I think you saved my casserole! I made a large batch of cauliflower cheese and froze it unbaked. I was about to let it thaw before baking but decided to do some quick research. I came across your article and it saved the day. Thanks so much for this thorough information!