Home Foodsguy Can You Freeze Cooked Potato Wedges?
FoodsguyFreezingHow To

Can You Freeze Cooked Potato Wedges? 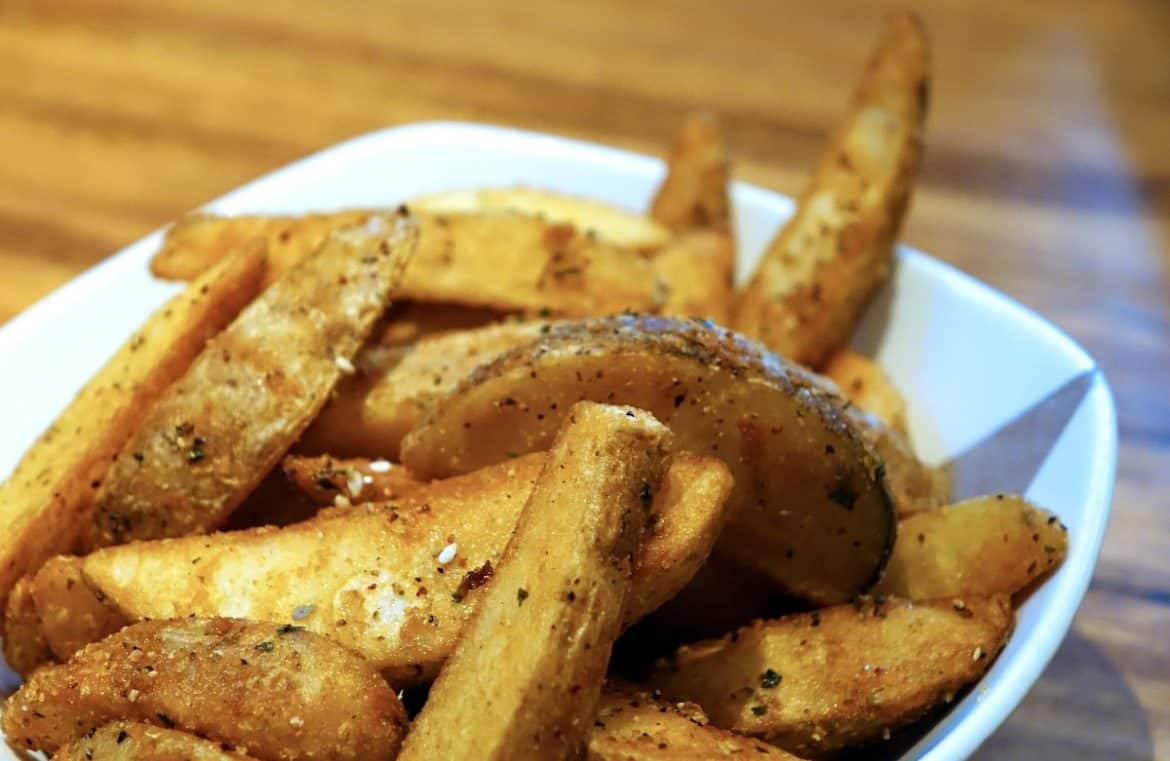 Potato wedges are one of those foods that, during the cooking or ordering process, my grandmother would say “your eyes are bigger than your stomach.” They look and smell so mouth-wateringly delicious that your mind encourages you to either cook or buy a much larger portion than you could ever possibly eat. Even when you’re stuffed to nearly overflowing, you still end up with leftovers.

And of course, the next logical question that flitters through your mind is whether or not you can freeze cooked potato wedges. You certainly can! Your technique might vary depending on how they were originally cooked, so we’ll walk you through the best practices of freezing cooked homemade or store-bought and previously frozen potato wedges.

The main difference between freezing fresh versus previously frozen cooked potato wedges is how they’re going to end up when you’re ready to eat them.

If the second is true, then your potato wedges have been cooked, frozen and cooked again. You can freeze them again, but you’ll have to be very strategic about warming them up when it’s time to enjoy them because every time they’re reheated they’re going to get dryer, chewier and less flavorful.

How To Make Homemade Potato Wedges

Potato wedges are so easy and inexpensive to make, it almost doesn’t make sense to buy the previously frozen versions.

Start by preheating your oven to 450F and washing a few fresh, large potatoes. Slice them lengthwise down the middle, and then slice each half lengthwise again. Angle your knife to 45 degrees and slice each quarter into 3 individual pieces.

Parboil the potatoes for 5 minutes and then drain and dry them.

Toss your wedges with a bit of oil, salt and any seasoning that you like. Some suggestions for you are:

Spread them out in a single layer on a baking sheet covered with aluminum foil or parchment paper (there is no better parchment paper then this one from Amazon). Depending on how thick your wedges are they should take a total of 20 – 30 minutes to cook, but you’ll want to flip them at least once.

After 20 minutes, keep a close eye on them. Potato wedges that are crispy on the outside and warm and soft on the inside will tell you they’re ready by going a beautiful golden-brown color. When the outsides are cooked, they should lift off the foil or paper easily without sticking and have a nice shine from the oil.

Once they’re cooked, eat as many as you’d like and lay the rest out in a single layer on a cooling rack and wait until they are room temperature.

With the cooling rack sitting inside a cookie sheet or on top of a large cutting board for stability, transfer the wedges as is to your freezer. You want to freeze them individually first, which takes around 30 minutes.

Once they’re thoroughly frozen, you can take them out of the freezer and transfer them to a freezer-safe Ziploc bag or airtight Tupperware container. You want to remove as much air as possible.

You can also create a foil packet for them by laying out a large sheet of aluminum foil, placing your individually frozen potato wedges in the center and folding your foil around them.

This has a few perks. First, with aluminum foil you can press it around your potatoes to avoid catching any air inside the packet, protecting the freshness of your wedges. Secondly, when you’re ready to warm them up to eat, you can simply open up the packet and leave the foil to line a baking sheet.

It’s always a good idea to label the bag, container or foil with the dates cooked and frozen. For the sake of freshness, hopefully, this is the same date. They will stay fresh in your freezer for up to 3 months.

The golden rule of any previously frozen food is to never refreeze it without cooking it first. If you’ve bought a large bag of frozen potato wedges and accidentally left them on your countertop, letting the whole bag thaw, you must cook the entire bag before you refreeze them.

Once they’re cooked, you can put them back in the freezer by following the same procedure as for the homemade fries above. It’s a good idea to note on the bag that they were previously frozen and cooked so that you don’t forget and try to cook them according to the original directions for your favorite frozen potato wedges.

How To Reheat Frozen Potato Wedges

Frozen potato wedges are perfectly easy to prepare since you take them straight out of the freezer and put them directly into your oven.

Since they’ve already been cooked once, they only need to be warmed up. How you do that will vary slightly depending on whether the wedges were homemade or previously frozen.

It’s also important to pay attention to whether or not there were any seasonings on the wedges the first time they were cooked, which applies to both homemade and previously frozen potatoes.

Most seasonings won’t affect the reheating, but if there was any cheese, such as parmesan, or fresh herbs, you’ll want to be extra careful to make sure your wedges don’t burn.

If they do have seasoning that is likely to burn before the wedges are warmed in the middle, consider putting them in the microwave for 1 – 2 minutes first, and then finishing warming them in your oven. Potato wedges won’t go crispy in the microwave but pre-warming them will mean they don’t have to spend as long in the oven to heat throughout, protecting the toppings from burning.

If they were made with only dried spices, it’s best not to start in the microwave.

Warming up homemade frozen potato wedges is pretty simple. You can simply transfer your frozen pieces to a baking sheet lined with aluminum foil or parchment paper. If you have an oil spray you can lightly spray them to help them crisp up again nicely, but you don’t need much.

Put them into a pre-heated oven at 450F. Flip after 5 minutes and then keep an eye on them. 10 minutes should be plenty, but if they look like they’re going past golden brown into burnt territory, take them out sooner rather than later.

Reheating previously frozen, previously cooked and then refrozen potato wedges might take a little bit more finesse to make sure they don’t dry out or become chewy.

For best success, wrap your still frozen potato wedges in tin foil and put it into a pre-heated oven at 425F. Leave them for 5 minutes covered in the foil and then unwrap them, spreading them out in a single layer on the foil-lined pan.

By leaving them covered, you’ll help maintain the moisture level so they don’t dry out from over-cooking but still warm thoroughly. If you have an oil spray, you can lightly spray them on one side. After 3 minutes, flip them and lightly spray the other side.

Take them out after another 3 minutes and they should be ready to enjoy once again!

Can you freeze cooked French fries?

Yes, you can freeze cooked French fries, but how well they freeze is going to depend on how long they were left out at room temperature.

For best results, don’t freeze them hot, but don’t let them sit on the counter for too long either, because bacteria will grow quickly. Freeze your French fries within 2 hours of being cooked, and they should last for up to a year in your freezer.

Can you freeze raw potatoes?

Potatoes have a high water content which can alter the texture if they’re frozen raw. They can also turn black when you thaw them, which is highly unappealing in a meal.

To avoid both of these issues, the best thing you can do is slice them into wedges, fries or chunks as needed and then blanch them for 2 to 3 minutes in boiling water, followed by an immediate ice bath. You can then freeze them and they’ll retain their flavor, color, and texture nicely.

How do you preserve potato chips?

There are a variety of ways to preserve potato chips. If you have an unopened bag of chips you can freeze them as-is for 3 months or even more.

When you’re ready to eat them, just let them thaw out on the counter for a few hours first. If your bag or container is opened, transfer the leftover chips to an airtight freezer-safe Ziploc bag and then freeze them.

Up Next: How To Reheat Tater Tots

How To Freeze Raspberries (Without Sugar)

How To Dehydrate Refried Beans: Step By Step