Can You Freeze Banana Pudding? 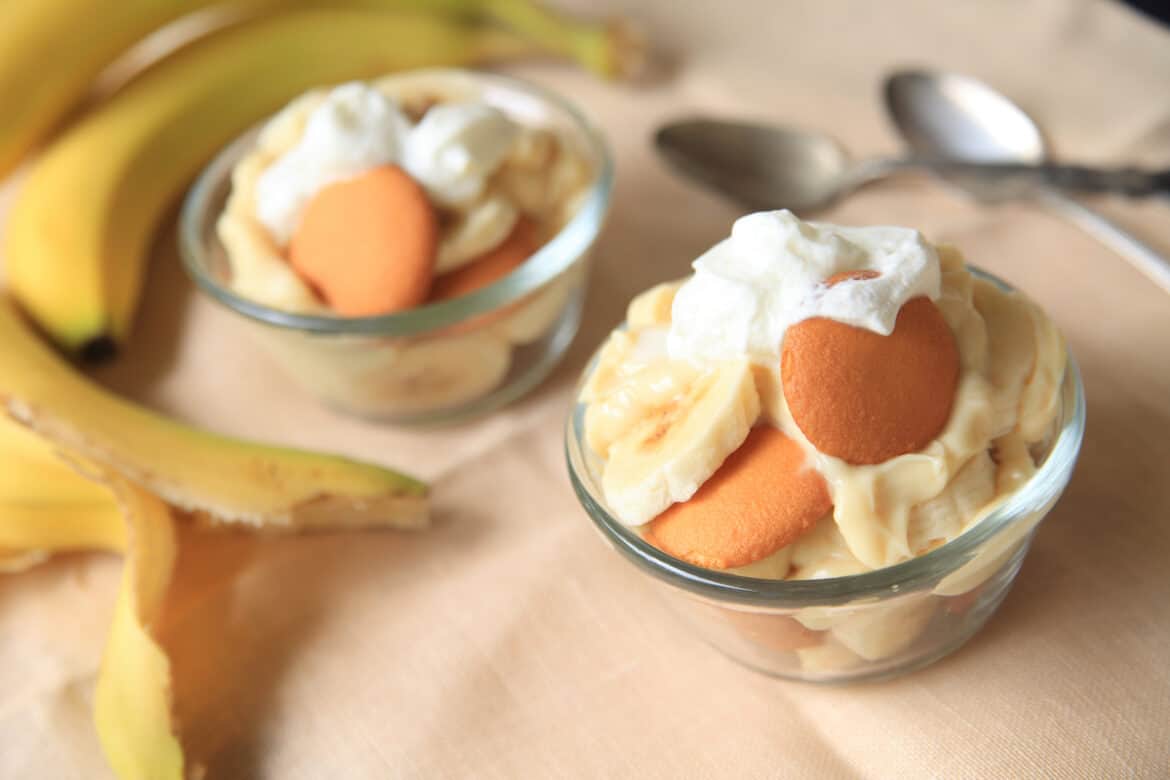 Banana pudding is not a dessert to be prepared and frozen for later use, as the layers it is made of don’t freeze well.

But can you freeze banana pudding? Yes, you can freeze banana pudding if you don’t want to discard the leftovers of your freshly-made dessert. Freezing affects the texture and the appearance of the pudding, but with the right freezing and thawing technique, these changes can be minimized.

You will also learn how long the pudding will last in the freezer, how to thaw it properly, and what else you can do with banana pudding leftovers if you decide not to freeze them afterall.

Banana pudding consists of a few layers of vanilla pudding, cookies or wafers, and banana slices. The finishing layer is either whipped cream or meringue.

Consisting of so many ingredients that don’t freeze well by themselves doesn’t make banana pudding suitable for freezing, especially long-term.

Here is what to expect when freezing banana pudding:

As for whipped cream, some people claim that it freezes well. But this is true only for heavy whipped cream frozen in small portions.

In the case of banana pudding, whipped cream is the finishing layer of the dessert. It is there to balance out the sweetness and people tend to use quite a lot of it. So, don’t expect the whipped cream to freeze well either.

The water content in banana pudding is high and the ingredients don’t take freezing well. So, banana pudding won’t have the same consistency and smoothness once you thaw it back out

With this being said, if you are choosing between letting your banana pudding leftovers go to waste and storing them in the freezer, definitely go with the second option.

Taking into account that storing banana pudding in the fridge is not the best idea either, as the pudding easily absorbs flavors from the foods around it, freezing is actually a quite reasonable storage option.

So, you can freeze banana pudding. However, you should know how to do it right to bring texture and flavor changes to the minimum.

Also, lower your expectations, as frozen and defrosted banana pudding doesn’t taste as good as when it is freshly made.

How to Freeze Banana Pudding

Banana pudding is not a dessert to be made beforehand and stored in the freezer. But if you always end up with banana pudding leftovers, there are things to take care of first, starting from the preparation process of the dessert.

Follow these steps to freeze banana pudding as successfully as possible:

Note: The fresher you freeze the pudding, the better. This is one of the key steps for preventing major texture and flavor changes. Don’t refrigerate the dessert and transfer it into the freezer after letting it sit in the fridge for a few days.

Can You Freeze Store-Bought Banana Pudding?

Yes, you can freeze store-bought banana pudding. The freezing technique is the same as with homemade pudding.

But there are two things to keep in mind. First, transfer store-bought banana pudding into an airtight container and only then freeze it.

Second, make sure to label the container with the expiration date printed on the original packaging.

How to Defrost Banana Pudding

For the defrosted banana pudding not to turn into a mushy mess, you need to thaw it gradually and not expose the pudding to drastic temperature changes.

To defrost banana pudding, transfer it from the freezer into the fridge and leave it there overnight. If you have frozen the pudding in small portions, it will take fewer hours to defrost and soften.

If you are in a rush, you can try accelerating the thawing process by submerging the container with pudding into water. Avoid using warm or hot water to defrost the pudding.

Never defrost banana pudding in the microwave. While it will do the job, the microwave will turn the pudding into mush and strongly affect the texture of the vanilla pudding.

Additionally, the microwave can warm the pudding. And banana pudding is best served cold.

How Long Does Banana Pudding Last?

Banana pudding doesn’t have a long shelf life. Stored in the fridge, banana pudding will keep well for around 3 days.

The freezer extends the shelf life of banana pudding to a maximum of 14 days. However, the sooner you defrost and eat the pudding, the better.

If the temperature in your freezer is stable, the pudding will keep safe for longer, but you most likely won’t enjoy its flavor and texture.

When freezing store-bought banana pudding, follow the expiration date printed on the packaging. You can keep fresh homemade pudding in the freezer for 2 weeks.

When freezing store-bought pudding with a shelf life of 5 days, it is best to freeze it only for 5 days.

How Do You Know If Banana Pudding Is Bad?

As banana pudding contains such perishable ingredients as milk and other dairy products, you should always inspect it closely before eating it.

First off, take a good look at the pudding. If you see any discoloration (besides the browned bananas) or bacterial growth in the container, discard it.

Secondly, smell the pudding. If the pudding smells funny, err on the safe side and don’t eat it.

And lastly, if the pudding looks and smells good, give it a try. If the pudding is no longer sweet but tastes sour or bitter, discard it.

What Else Can You Do With Leftover Banana Pudding?

If freezing leftover banana pudding doesn’t seem like it will work for you, there are other ways to use up the leftovers.

Here is what you can do with leftover banana pudding.

The easiest thing you can do with leftover banana pudding is to mush it and combine it with milk. Mix until smooth.

Spoon the mixture into popsicle molds. Tap it against the table to release any bubbles. Insert sticks halfway through the molds and freeze the banana pudding pops until solid.

You can then experiment with the popsicles by dipping them into melted chocolate and layering with coconut flakes, nuts, colorful sprinkles, etc.

2. Banana Bread With a Twist

You may not be good at baking banana bread from scratch. But with leftover banana pudding, things are much easier.

All you need to do is to line a loaf pan with parchment paper and pour the pudding leftovers into it, along with eggs, sugar, and vanilla syrup. Mix well until fully combined.

Top the mixture with bread cubes and let them soak up some moisture. Bake the leftover banana pudding bread in the oven at 325°F. Bake until the bread becomes golden brown.

The result will be different from conventional banana bread and resemble more of a pudding. However, the flavor will certainly be there.

Banana bread also saves for much longer than banana pudding. In fact, you can also choose to freeze your banana bread.

If making ice cream or bananas foster at home is what you often do, then this variation with leftover banana pudding is something you will like.

Add the bits of banana pudding into your vanilla ice cream while churning it and blend well to reach a smooth texture. Freeze the ice cream until solid and serve with your desired toppings.

Up Next: Banana Muffins Without Baking Soda

What Is Moka? – The Ultimate Guide