Home Foodsguy Can You Freeze Aquafaba? – The Best Way
FoodsguyFreezingHow To

Can You Freeze Aquafaba? – The Best Way 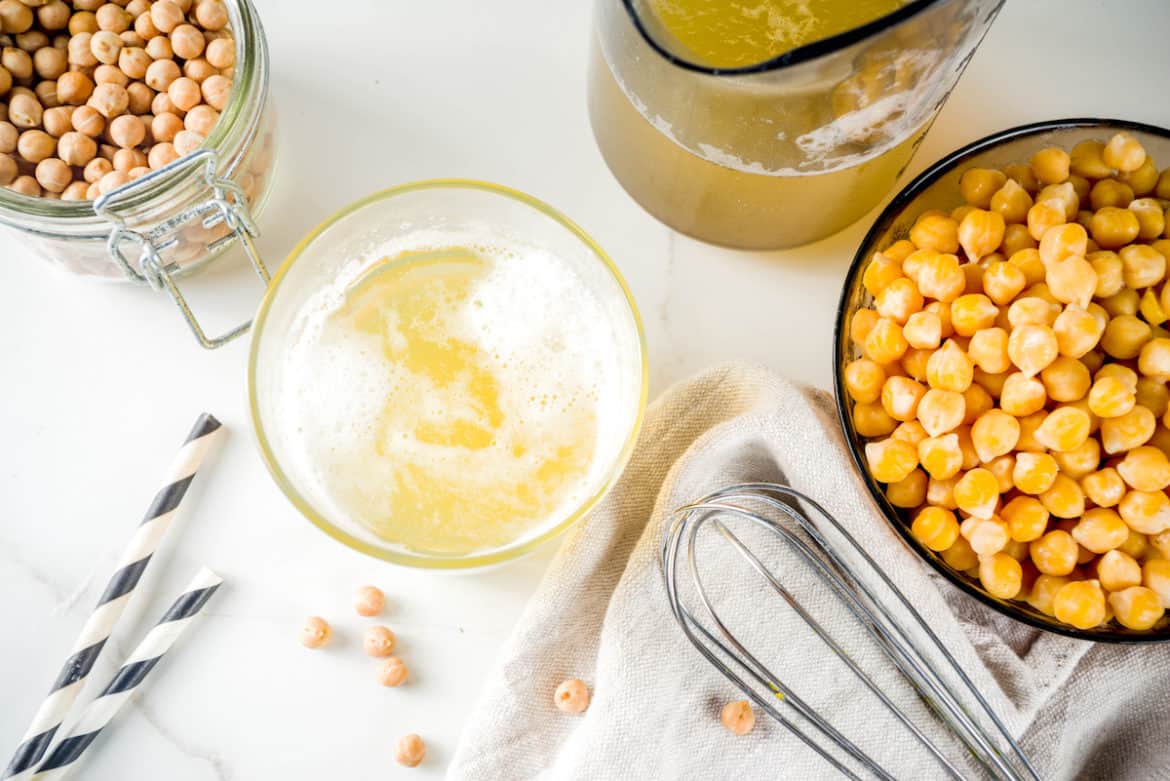 Aquafaba is the bean water that comes in cans of chickpeas that many vegans use as an egg white substitute in specific baking and cooking techniques. As soon as you understand how versatile it is, you’ll never want to waste another ounce of this handy liquid again!

If you make your chickpeas from dried beans, you can easily make your own aquafaba as well. But what happens if you have a cupful, or even a quart or two of this valuable liquid and no baking plans in your immediate future?

Can you freeze aquafaba? There are a few ways you can freeze aquafaba, but our favorite is to separate it into “egg” volumes so that you can easily take out just as much as you need when you need it. This is easily done by freezing the aquafaba in ice trays.

When you open up a can of chickpeas or any other bean there’s always a thick, not quite clear watery fluid that your legumes are soaking in. Most people pull out their colander, dump in the garbanzos and rinse all this slightly slimy water away before using the beans.

That fluid is aquafaba and if you’re pouring it down the drain, you’re missing out on a lot of potential baking hacks. The name comes from the Latin words for water, “aqua” and bean, “faba.”

You can also buy powdered aquafaba from the store. If you don’t enjoy eating beans but want to make use of aquafaba, I suggest this powdered version on Amazon.

There are plenty of food uses that make me wonder who the person was to first think of a new protocol, but in the case of aquafaba that honor goes to a French musician who happened to be a vegan who enjoyed conducting experiments in his kitchen.

In 2014 he noticed that the water from canned beans had the ability to foam and, through more experiments he was able to put his discovery to use in recipes that had been previously forbidden to vegans, like meringues and mousse.

From there another vegan food enthusiast picked up his on his enthusiasm and really made aquafaba an international food trend over the next few years. He was a software engineer. This just goes to show that anyone can start a revolutionary food trend in their kitchen, any time and from anywhere. You don’t need to be a classically trained chef!

As more was discovered about this bean water, we now know that the starches in beans that break down through the cooking process leach into the water, along with some protein and sugar from the beans, and the result makes an excellent substitute for the simple proteins that make egg whites such great foaming agents.

How to Make Your Own Aquafaba

Of course, canned chickpeas and other beans are incredible times savers and really convenient. But with a bit of foresight and planning, you can easily prepare all your own legumes for a fraction of the cost and, arguably, better nutritional value.

At the very least you’ll be reducing the potential dangers of consuming food packaged in BPA-lined metal tins, not to mention the additives and preservatives that are sometimes used in processed foods like this.

Making your own aquafaba is as easy as making your own chickpeas from dried beans. It’s a very simple process and doesn’t take a lot of action time on your behalf, but it does take a lot of waiting time, so it’s a good idea to start at least the day before you need your beans or aquafaba.

Start by soaking your chickpeas. This not only speeds up the cooking process but it also helps to break down some of the complex sugars that are difficult to digest and make beans the subject of many of a cringe-worthy children’s rhyme. To make the waiting less painful, soak your garbanzo beans overnight, just make sure there is plenty of water to soak up and room to grow because they’ll double in size, if not more.

You can soak your chickpeas even longer, but rinse them every 8 hours or so. The water that you soak your chickpeas in is NOT aquafaba and it’s not going to do your digestive tract any favors if you drink it or try to cook with it, so don’t feel bad about pouring the soaking water down the drain. It’s the cooking water you want to hold onto.

After they’ve been soaked for at least 8 hours, you can transfer them to a large pot with enough fresh water to cover them completely. Bring the water to a boil and then reduce the heat to a simmer. They’ll need to cook for around 2 hours. The longer they have soaked ahead of time, the quicker they’ll cook, but you can test them for your own preferred tenderness after about an hour and a half.

Throughout this time, you’ll want to keep an eye on them and top up the water if it gets low. You always want your beans completely covered. You’ll probably notice a bit of foam or froth developing on the top of the water. This is completely normal and you can just scoop it off and get rid of it.

When your chickpeas are at a pleasing texture, they’re done! Drain them so that the water collects into a heat friendly bowl – this is the aquafaba that you want to keep for your baking needs.

And that’s all there is to it. Not only do you have the makings of a delicious meal or snacky dip, but you also have a quart or more of aquafaba to play with.

How to Freeze Aquafaba

If you don’t have plans to use up all of your aquafaba at once, don’t discard it. It freezes really well! Just wait until it’s completely cooled down before you transfer it to your freezer.

Here are two easy formulas to remember for measuring your aquafaba:

To freeze in these quantities, pull out an ice cube tray. Just measure the appropriate amount into each cube space and let them freeze thoroughly.

Once they’re frozen you can transfer them into a freezer-friendly Ziploc bag or storage container. It’s a good idea to not only label your bag or container with the date you froze your aquafaba, but also with the amount of liquid you froze it as so you know exactly how much you’ll be pulling out when you need to use it.

If you make more aquafaba before you’ve used up the previously frozen batch, freeze and contain it in a separately labelled bag or container and use the oldest batch first. Aquafaba will last 3 – 4 months frozen like this, but after a while it will start to attract a “freezer” taste, to use it at the first opportunity you come across.

How to Thaw Aquafaba

To thaw your aquafaba, just take a cube out of your freezer and let it sit in a bowl on your counter until it melts. It shouldn’t take long and it’s best not to try to heat it up in your microwave or stovetop to thaw because it might change the results when you need to use it. Let it defrost naturally.

Aquafaba is most often used in vegan recipes that need a substitute for egg whites, but it can also be used to replace whole eggs in many recipes and, depending on the circumstances, even dairy.

It’s popular with vegans, but it’s also a low-fat option for others who are looking to lighten up their baking practices, and it’s perfect for anyone with an egg allergy or intolerance.

Aquafaba responds very similarly to actual egg whites. Many traditional recipes use stabilizing ingredients like sugar and even cream of tartar to help boost the structure and form of their foam.

The same can be done for aquafaba. In sweet recipes, use sugar. If you want to move away from sugar, the acid in cream of tartar will have a similar effect without the sweetness and blood sugar spike.

Aquafaba foams up delightfully, just like egg whites will. For this reason, it can be used as a vegan-friendly solution to making light, airy meringues, marshmallows, pavlova, macaroons, nougats, and even mousse.

You might even notice certain foamy cocktails at your favorite vegan friend restaurant use aquafaba.

One of the things that many vegans miss are creamy condiments like mayonnaise and aioli. With the miracle of aquafaba and a few other impressive substitutions, plant-based eaters can enjoy their favorite condiments once again, entirely egg-free.

Many vegan bakers also use aquafaba to replace whole eggs in their baked goods as it makes a very egg-like binding agent.

There are many recipes that use aquafaba to substitute the dairy ingredients which is not only great news for vegans, but also for the millions of lactose-intolerant humans.

There usually needs to be a few additional ingredients used, such as oils, vinegars and sugars, but it really depends on the recipe you’re adapting.

Aquafaba is a fantastic substitution for eggs for anyone who can’t have eggs in their diet, but it isn’t necessarily a nutrient-dense solution, especially in comparison to everything that comes inside eggs.

Aquafaba is low in calories, protein, carbs and fat and contains very little in the form of micronutrients. In most cases, aquafaba is used in instances where the egg is not the focal point of the recipe, so most people aren’t making these dishes for the nutritional value of the eggs anyways. Let’s be honest, who eats pavlova for the protein?

Nonetheless, it’s important that you realize that while aquafaba is a great solution to enjoying a variety of foods that traditionally were relegated exclusively the egg and dairy consumers, you’re not doing a lot for your health in the process.

How long will aquafaba last in the fridge?

Can you freeze chickpeas?

What happens if you freeze hummus?

If you too find yourself with a lot of extra dip on hand, or if you’re leaving the house for a few days, fear not – hummus does freeze well, as long as you know a couple insider secrets.  Just following these simple steps is all it takes to freeze hummus like a pro!

If you want to know how to thaw hummus after freezing, head over to our article about microwaving hummus (and how to do it properly).

Can You Freeze Broccoli Salad? – Step By Step

The Best Flour For Chapati In 2021