Home Cooking Tips Flatbread Vs Pizza — What’s The Difference?
Cooking TipsFoodsguyThis vs That 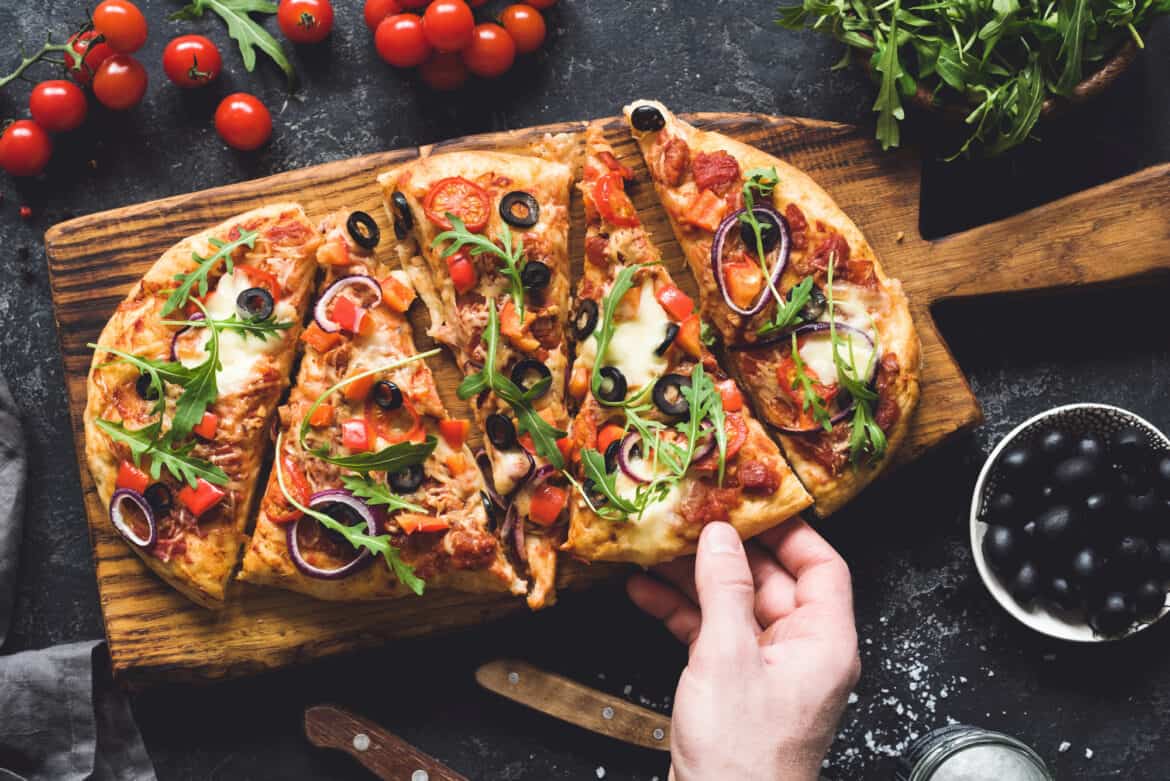 Pizzas and flatbreads may look similar, but there are a few key characteristics that truly set them apart!

Flatbread vs pizza, what is the difference? Flatbread is typically any type of unleavened bread that doesn’t require yeast or any other chemical leavening. Pizza dough, on the other hand, is commonly prepared by adding yeast and then proofing it until the dough has doubled in size.

Read below to learn more about flatbreads and pizzas, how they are made, their differences, and common toppings!

It’s All In The Dough

Flatbreads and pizzas have more in common than you think!

While they might not look similar now, the humble flatbread is known to be a precursor to modern pizza.

Pizza was introduced in Italy and was widely known to be the “poor man’s” food because it was made using nothing but a combination of dough, sauce, and cheese — with a few fresh herbs on top.

It was a quick, easy, and (more importantly) cheap dish that could provide energy and flavor in one convenient package!

The original pizza was born in Naples and was made using flatbread dough. It is thought that focaccia bread was once used as the default base for most pizzas.

The bread was initially enjoyed with a drizzle of olive oil but soon people started to experiment with different ingredients.

This is when tomato sauce, herbs, and of course, cheese made their way as a topping — the rest, as they say, is history!

Interestingly, many countries are experimenting with the concept of traditional flatbreads and are coming up with their own versions of pizzas, like the Tawa Pizza, Pizza Roti, or Pizza Naan (to name a few).

Differences Between Flatbread and Pizza

So, what is about flatbread that makes it different from modern-day pizzas? Let’s take a look at their characteristics.

All flatbreads have one thing in common: they are unleavened. This means that they don’t rise like regular pizza dough and are relatively flat, hence the name!

In comparison, leavened dough has very different characteristics. It can be softer, airier, and have a distinct flavor due to the chemical processes encouraged by the yeast in the dough.

But this doesn’t mean that flatbreads are any less desirable!

Flatbreads usually have a crispier texture with deep and delicious caramelization, which forms due to the lack of moisture and air in the dough.

When exposed to a woodfire, or any other heat source, the flattened dough quickly renders as the excess water is evaporated within minutes.

But there is an interesting consequence of this effect.

When a moisture-rich sauce, like tomato sauce, is added to a flatbread dough, the sauce helps the dough stay moist and soft in the middle. Since the dough isn’t thick, the sauce is also able to penetrate deep into the dough!

This means that flatbread pizzas will usually have a crispy and thin edge with a moist and delicious center — that can also have a subtle crispy layer at the bottom.

For the best results, flatbreads are only exclusively made in large, high-heat brick ovens that can cook the dough quickly and without over-drying it.

Remember: flatbreads don’t have as much moisture and density, which means that if they were to be cooked for longer, they would potentially turn into crackers!

Another noteworthy point is their shape.

Flatbreads are usually rolled out using a rolling pin but are shaped by hand to extend the edges of the dough, which gives them an oval and unfinished shape. This is considered to be part of the charm of flatbread pizzas!

They can also be prepared in rectangular shapes and are usually cut with scissors instead of a knife, as is common in Italy.

How Flatbread Is Made

To make flatbread, start with 2-3 cups of flour, and then season with salt. Then slowly add water and begin to mix. Keep adding a bit of water until you form a dough.

Once the dough is formed, knead it with your knuckles until it is soft and fluffy. Then let the dough rest for about 1-2 hours.

Divide the dough into equal pieces and then form small balls using all the pieces of dough.

Take a small dough ball and dust it with a bit of flour. Press a rolling pin over it and flatten the dough until it has a rounded shape.

Use your hands to manually extend the sides of the dough until they are equally thin. Then apply the toppings!

Carefully lift the dough and then place it in a preheated brick oven. Cook for a few minutes until the crust is golden-brown or when the cheese has melted.

Flatbreads contain simple ingredients, just like traditional bread. So, they offer a milder flavor that can vary depending on the level of caramelization and toppings.

Flatbreads are usually paired with exotic ingredients that aren’t normally used with regular pizza dough. For example, some flatbreads can be prepared with a combination of goat’s cheese and even gravlax.

In most cases, you can expect far more versatility and innovation in flatbreads — and since everyone has a different approach to the dough, flatbread pizzas make for one of the tastiest and more surprising pies!

As explained above, the most striking difference between flatbread and pizza is the dough.

Pizza dough is leavened using yeast, which not only thickens but also adds a softer and airier texture to the dough.

How Pizza Dough Is Made

To make pizza dough, a combination of flour, salt, water, sugar, and yeast is added. The sugar in the dough is important because it is the primary food source for the yeast!

Once the yeast is activated with warm water, it starts consuming the sugar and starch. As a result of all this munching, the yeast gives off carbon gas as a byproduct.

The carbon gas accumulates within the molecular structure of the dough — which slowly lifts it.

This process can take anywhere from a few hours to even a day, depending on the type of bread, yeast, and even ambient weather conditions.

Modern pizza dough has a pronounced sweet and bread-like flavor, unlike flatbread, which heavily relies on the sauce for the same characteristics.

This means that pizza dough caramelizes better and can be more appealing to the masses, especially the younger crowd that wants a savory, lightly sweet, and complex pizza.

Pizza dough also has a distinct yeasty and doughy flavor that plays well with the cheese and other ingredients.

Some pizzerias may even mix dairy products like milk powder or other sweetened milk products to enhance the flavor of the dough.

But again, not every pizza is the same — so you should expect more or less the same diversity in regular pizza dough just as flatbreads.

Both flatbread and pizza are popular dough options. Many big brands like Pizza Hut and Domino’s, along with other local pizzerias, offer more than one type of dough, which indicates that there is a demand for both!

Regular pizza can also be paired with a range of toppings. Since the beauty of pizza includes not having an acceptable guideline, you can experiment with the toppings and flavors in many ways.

However, most pizzerias try to go for mainstream flavors when it comes to regular pizzas and reserve the experimentation for flatbreads, which are usually perceived as being gourmet.

Here’s a quick summary of the differences between the two:

Flatbread and pizzas are both delicious types of dough with a few fundamental differences. Now that you know what sets them apart, here are some related questions.

Can flatbread be made at home?

Most simple flatbreads can be made at home using a simple cast iron pan. But for flatbreads with toppings, you will most likely require a very hot oven.

We recommend going with a preheated pizza stone that can mimic the qualities of a brick oven even in an electric or gas oven.

Is flatbread healthier than pizza?

Flatbread contains simple ingredients and is usually free of preservatives and improvers that are commonly found in most types of commercial dough.

They can be lighter on the stomach and some people also find them to be easier to digest due to the lack of yeast and other chemical improvers in the dough.

Does Starbucks Have Decaf Cold Brew?