Can You Use Evaporated Milk In Coffee? 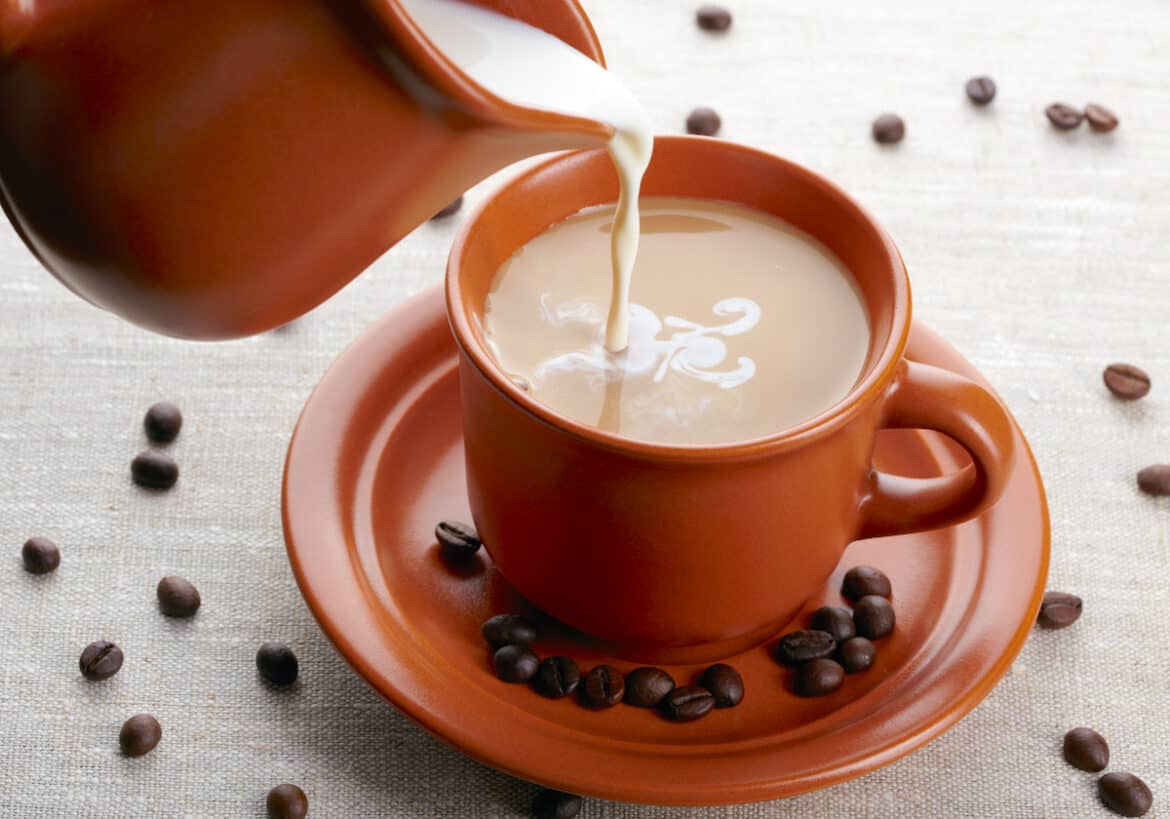 Coffee with milk is always a good idea.

But what if you don’t have any milk or cream in your fridge or they are already expired? You only have a can of evaporated milk sitting in your pantry.

In this article, we will give you step-by-step instructions on how to use evaporated milk in coffee for best results. We have also picked three evaporated milk options in case you decide to check out this sugar-free way of making your coffee creamy and delicious.

What Is Evaporated Milk Anyway?

Evaporated milk is a confusing term.

Is it the same as condensed milk? Evaporated milk is different from condensed milk. However, the two look similar and are even sold in similar cans which makes things confusing.

While both evaporated milk and condensed milk are concentrated forms of milk where 60% of the water has been removed, there is one major difference between the two: There is no sugar in evaporated milk.

In condensed milk, on the other hand, there is plenty of it. Which is why it’s typically referred to as sweetened condensed milk.

You can think of evaporated milk as sugar-free condensed milk.

As far as the nutritional value is concerned, it is the same in evaporated milk as in fresh milk. But as it is a concentrated product, it takes less space. Once you mix evaporated milk with water, it becomes one of the best substitutes for milk, nearly identical.

Can You Use Evaporated Milk in Coffee?

Evaporated milk finds its uses in recipes where there is a need for creamy texture but no need for added sugar and sweetness.

You can certainly use evaporated milk in your coffee to make it velvety smooth and soften the bitterness of the coffee.

Evaporated milk adds a milky taste to your coffee as it is really just concentrated milk, only the texture is less watery. As it undergoes a lot of heat processing, it may develop a faint caramelized flavor.

But as evaporated milk is thicker than the common ‘milky’ additives for coffee, you need to know how to use it right.

But first, let’s talk about the benefits of using evaporated milk in coffee.

Firstly, it can make your coffee very creamy. Secondly, it can help you avoid using sugar in coffee if you are someone that can’t live without sugar-packed coffee creamers.

And lastly, as a can of evaporated milk is shelf-stable, you can take it with you anywhere as a substitute for milk or creamer.

As the shelf-life of evaporated milk is only around 4 days and you need to use the smallest amount in coffee, you need to find a way to use up the product.

You can freeze evaporated milk to some extent, but you will still have to use your thawed milk all at once.

It may be best to use the leftover evaporated milk to make smoothies or desserts. You can also add it to savory dishes, such as mashed potatoes, white sauce for pasta, etc.

You may be wondering what makes evaporated milk different from common coffee additives.

But as for the texture and creaminess they give the coffee, evaporated milk and cream are very similar. They both have a fairly thick consistency and don’t contain any sugar.

Secondly, most coffee creamers are dairy-free. They are a combination of sugar, vegetable oil, and water.

And lastly, there is no sugar in evaporated milk while the sugar content in creamers is typically very high. You can, of course, find options made with sugar substitutes. But this doesn’t make them any healthier.

So, using evaporated milk in coffee as a substitute for heavy cream or coffee creamer is a great way to cut down on calories and sugar.

How to Use Evaporated Milk in Coffee

Here are step-by-step instructions on how to make creamy and delicious coffee using evaporated milk:

To do so, do the following. If you need a cup of milk for a few servings of coffee altogether, combine half a cup of water with half a cup of evaporated milk and mix well.

And here you have a perfect substitute for milk and there is no need to eyeball evaporated milk for every cup of coffee you are making.

The idea of having creamy coffee with no sugar and excessive calories and fat is rather appealing.

We have picked three of the best evaporated milk options you can give a try:

Let’s look at each of these great choices in more detail.

Evaporated milk made of cow’s milk is very popular. But if you are sensitive to cow’s milk, evaporated goat milk is what you should buy instead.

There are a few benefits to using evaporated goat milk. First, it is easier for many to digest than cow’s milk. Second, it has a mild and creamy flavor that will work perfectly in coffee. And lastly, it contains more potassium than cow’s milk.

The Mayenberg evaporated goat milk is a rather healthy option. It is enriched with vitamins A and D, contains a high amount of calcium, and is low in sodium. A serving of this evaporated milk contains 2 grams of protein.

Another good option for evaporated milk is the one produced by PET, the first company that started the commercial production of evaporated milk, at least as a shelf-stable product. The great expertise is the secret behind the evaporated milk that is so well-loved by many people.

Enriched with vitamin D, the PET evaporated milk contains 20 calories per tablespoon and only 1 gram of saturated fat.

The protein content is the same as with the previous options – a gram of protein per tablespoon. PET also produces fat-free evaporated milk.

This listing offers a whopping 12 pack, but if that’s too much for you, you can always get single servings or smaller packages like this PET 4 pack.

Up Next: How To Make Tea With Milk Powder

Does Smirnoff Ice Expire? – What You Need To Know

What To Serve With Beef Stew