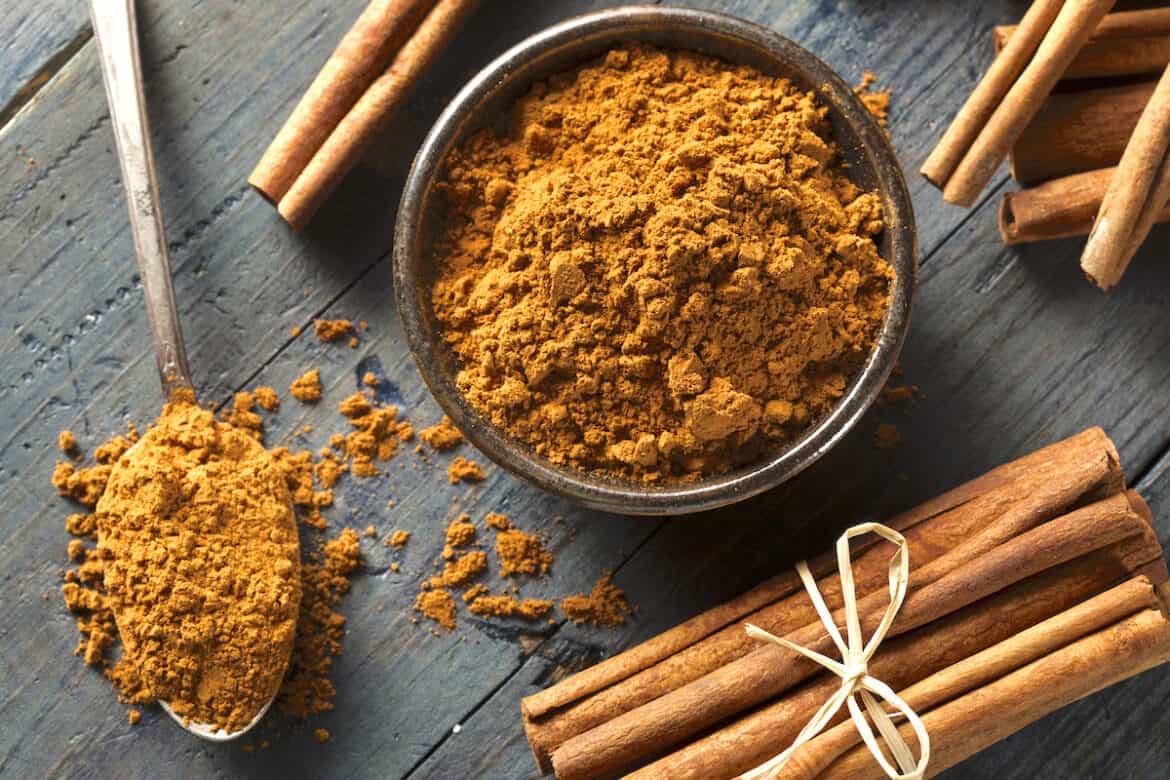 Cinnamon-flavored drinks are all the rage when it gets cold. You may like drinking cinnamon-infused drinks all year round, too. But there is a problem you may face. Ground cinnamon doesn’t mix well in liquids.

Does cinnamon dissolve? No, cinnamon doesn’t dissolve in liquids. As it comes from the bark of a tree, cinnamon is very fibrous. The particles of powdered cinnamon won’t dissolve. Instead, they absorb water and come to the surface of the drink or remain at the bottom of the cup if coarsely ground.

Continue reading to learn what is it that prevents this spice from dissolving in liquids and how to add it to water, coffee, or milk without the powder being too grainy or turning into slimy masses.

Adding Cinnamon to Your Drinks

If you want to spice up your day-to-day drinks but don’t know how, cinnamon is one way to give them an extra kick.

But the flavor is not the only reason you should add cinnamon to your drinks.

Here are a few reasons why you should add cinnamon to your drink:

But there are a lot of different drinks you can put cinnamon in, and each one is different. So, let’s take a look at a few of our favorite drinks to add cinnamon to.

If you have never tried out cinnamon water, it’s high time you did. It is not only flavorful but also extremely healthy.

Cinnamon water is full of antioxidants and has anti-inflammatory properties. It also boosts immunity and aids in weight loss, as cinnamon water keeps your cravings at bay.

If you’re also looking for ways to add apple cider vinegar to your diet but hate the taste, you can create a refreshing drink that tastes like apple pie by mixing water, a couple of tablespoons of apple cider vinegar and apple juice, and cinnamon to taste.

Milk with cinnamon not only tastes heavenly but is also a remedy for such issues as a sore throat and insomnia.

You can add honey, cloves, and vanilla extract to milk along with cinnamon if you enjoy deeper or brighter flavors.

Cinnamon in coffee is both delicious and healthy. Aside from making the coffee extremely aromatic, cinnamon adds such health benefits as lowered blood sugar and cholesterol levels.

You can add cinnamon to any of your favorite coffee drinks, from Turkish coffee to lattes and cappuccinos.

No matter how long you stir, powdered cinnamon will never dissolve in water, coffee, milk, or any other liquid.

If you absolutely need something that will completely dissolve into your drink, we recommend checking out our article for the best substitutes for cinnamon instead.

Even boiling the liquid with ground cinnamon in it for hours won’t do the trick. But what’s the reason for this?

Cinnamon is obtained from the inner bark of a tree. It is very fibrous. Even when grounded, your attempts to dissolve it in liquids won’t be successful.

The small particles of powdered cinnamon are still too fibrous to dissolve in water or other liquids.

Cinnamon particles, or the ground bark, won’t dissolve in liquids like sugar or salt. These are made from tiny crystals that disappear as soon as you mix them into any kind of liquid, be it hot or cold. Cinnamon particles are insoluble.

In fact, when you try to dissolve cinnamon in liquids, the fibrous particles expand. This is when most people experience cinnamon clumps in drinks.

How Do You Get Cinnamon to Dissolve?

As we have already explained, cinnamon doesn’t dissolve in liquids, as it is essentially ground bark. Some may even call cinnamon hydrophobic, as it repels water.

The trusted way of successfully mixing cinnamon into your drinks is mixing it with honey or your favorite syrup.

Mix half a teaspoon of cinnamon with a teaspoon of honey or syrup. When adding this mixture to the drink, start with a small amount of liquid and stir vigorously.

This will ensure that there are no cinnamon clumps in your drink. Then, slowly add the rest of the liquid and keep stirring.

The downside of this method is that it will only work for people who like having their drinks sweetened.

If you want to enjoy cinnamon-flavored drinks but the grains get in the way, the best thing you can do is use cinnamon sticks for your drinks.

Can You Dissolve Cinnamon in Water?

We recommend using cinnamon sticks when making cinnamon water, as they work great at infusing it with cinnamon flavor and all the benefits it comes with.

But if ground cinnamon is all you have, here’s what you can do:

If you don’t have cinnamon sticks at home but don’t want any cinnamon particles in your water either, an alternative way to make cinnamon water is with the help of empty tea bag filters.

Can You Dissolve Cinnamon in Milk?

Ground cinnamon doesn’t dissolve in liquids, including milk. But one thing is certain. It mixes better in milk than it does in water or water-based drinks.

To make cinnamon-flavored milk, do the following:

While you may not get as many strange clumps or cinnamon rising to the surface because milk is thicker than water, the particles will not disappear altogether.

Can You Dissolve Cinnamon in Coffee?

Sprinkling a pinch of cinnamon powder on your coffee when it’s done may not do true cinnamon-flavored coffee justice. You need to mix the powder into the coffee to make the most of it.

When adding ground cinnamon to your coffee, make sure it is ground as finely as possible. This will ensure that you don’t feel cinnamon grains while drinking your coffee.

On the other hand, if you grind cinnamon slightly more coarsely, you will notice that it goes to the bottom of the cup a few minutes after you pour the coffee.

This might be a good thing if you can sacrifice that precious last sip of cinnamon-ground-filled coffee.

To add cinnamon to pre-brewed coffee, mix ground cinnamon with a small amount of milk. Then add the milk to your coffee and stir.

If you drink your coffee sweetened, adding cinnamon mixed with a small amount of honey or syrup of your choice is also a working method for cinnamon-flavored coffee.

You can also add ground cinnamon to your coffee before brewing it.

How Much Cinnamon Should I Put in My Coffee Grounds?

You can, of course, add ground cinnamon to your coffee when it’s done. However, the ideal way of making cinnamon-infused coffee is by adding the flavorful spice to your grounds brewing them.

But there’s a catch; you shouldn’t brew the coffee grounds along with ground cinnamon if you are using an espresso machine.

As the fibrous cinnamon particles expand differently than the ground coffee particles, you are risking clogging your coffee maker.

Add cinnamon powder to your coffee grounds before brewing them if you are using a French press. Filtering the coffee will remove the slimy cinnamon sludge and leave you with perfect cinnamon-flavored coffee.

Add 1/4 teaspoon or a sprinkle of ground cinnamon to the coffee grounds before brewing them.

Tips for Adding Cinnamon to Your Drinks

If you love the warmth that cinnamon adds to the drinks but the grainy feel is what throws you off, there are a few tips you may want to try out for better results.

1. Use a Cinnamon Stick

Stir your coffee or tea with a cinnamon stick until you are happy with the flavor. Doing this is easier than dealing with cinnamon powder in your drinks. It will add flavor without you having to face the issue of cinnamon clumps.

Additionally, cinnamon sticks are more flavorful and robust compared to ground cinnamon, unless you have just powdered the stick yourself.

2. Add Cinnamon to the Cream

It is easier to mix cinnamon powder with cream rather than trying to mix it with the drink itself.

So, if you will be adding cream to your coffee, first add a pinch of powdered cinnamon to it. This tip works better when you are using heavy cream with a high fat content.

A pinch of cinnamon sprinkled on the white peaks of whipped cream also looks exceptionally appetizing.

You can mix powdered cinnamon to your coffee grounds before brewing the coffee. However, there is an easier way to infuse your coffee with cinnamon flavor and aroma.

Put a few cinnamon sticks into your coffee grounds or beans. This will infuse them with a cinnamon aroma and you won’t have to deal with measurements every time you want to make cinnamon-flavored coffee.

Up Next: Recipe – Cinnamon Rolls Without Brown Sugar

What To Do With Melted Chocolate