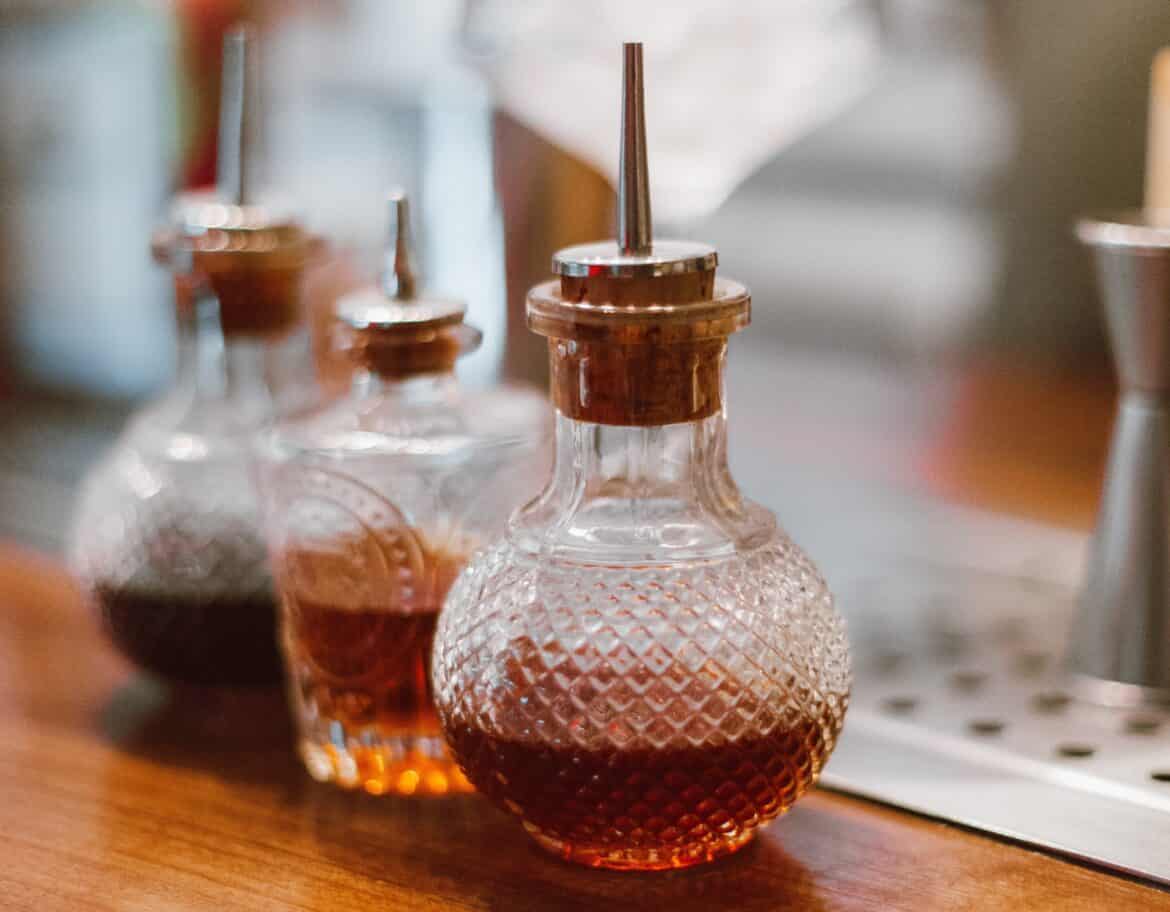 You may have noticed that any well-stocked cocktail bar contains a bottle of bitters, and been tempted to purchase a bottle for yourself.

But what are bitters, and what is the best way to store them?

Do bitters need to be refrigerated? Bitters are made from a strong alcoholic spirit infused with natural flavorings. The high alcohol content means that bitters do not need to be refrigerated as they are shelf-stable at room temperature. Once opened, a bottle of bitters should be kept in an upright position in a cool, dark place.

If you’ve recently expanded your cocktail repertoire to include recipes that contain bitters, keep reading to find out how to keep this delicious ingredient in the best possible condition!

Bitters are one of those products that we tend to buy for a special event, and then they end up shoved to the back of the cupboard, never to see the light of day again!

But it is about time that this versatile and flavorful ingredient was properly appreciated, as they have many more uses than you might first realize.

However, this alcoholic infusion is not commonly sold alongside other liquors such as wine and spirits because it is normally sold and used as a flavoring.

The botanical flavorings in bitters can vary widely, but the blend is normally selected for its aromatic properties as well as the intense flavor.

The infusion is so intense that you would have to be very brave to try drinking neat bitters! However, they have various different uses around the home. Let’s learn a few of them!

In cocktails, bitters are selected because of their ability to add a fresh smell and flavor to drinks.

Most cocktails are based on a combination of sweet and sour flavors, and the addition of bitters is intended to balance these two flavors together. They also add a very natural aroma and bring a more complex flavor profile to the drink.

The most famous cocktail to include bitters is the iconic Manhattan, but it is also added to numerous other mixed drinks.

Some of the most famous brands of bitters, such as Angostura bitters, are also intended for use in cooking. They are added to bread, soups, and marinades, and can even be used in sweet baked goods.

Some bitters work particularly well as a glaze for meat or vegetables, as they add a rich, caramelized flavor.

When it comes to using bitters in cooking, just remember that a little bit goes a very long way!

A teaspoon should be more than enough for a batch of marinade, and a rich stock normally only requires a drop or two of bitters to change the flavor completely.

Using Bitters As A Herbal Remedy

Interestingly, the use of bitters was first developed by the ancient Egyptians, who infused wine with medicinal herbs to create herbal remedies.

Due to their high alcohol content, they are not commonly consumed in this way anymore, but you may have drunk a form of medicinal bitters without realizing it.

The reason for this is that many after-dinner digestive beverages are based on the same methodology as bitters.

Some drinks you now commonly find on a bar menu, such as Jägermeister, Campari, and Aperol, are actually digestive bitters that were traditionally served after a large meal!

What Are Bitters Made From?

The standard way to make bitters is to infuse a clear alcoholic spirit, normally made from grains, with botanical additives.

Grain alcohol tends to be very strong, which maximizes the flavor of botanicals in the drink. The neutral flavor of the spirit allows the botanical flavorings to be maximized.

But where does the bitter part come in? Well, bitters normally contain some form of root, known as a bittering agent. This is commonly dandelion or angelica root, but the root of licorice, burdock, and many other plants can also be used.

The aromatic flavorings of bitters also come from ingredients that we would not commonly expect to find in our drinks.

These include the bark of trees such as cassia and cinchona, the peel of citrus fruit, and woody full-flavored spices like cinnamon, cloves, and lemongrass.

If you’re new to the world of cocktail making, you’ll soon realize that there are certain ingredients that you’ll only use now and again, but they are still an essential part of your cocktail mixing armory!

So, you might start with the basics, but before you know it you’ll be splashing out on more obscure ingredients and flavorings like simple syrup, grenadine, and bitters.

A bottle of bitters is so intense that a little bit goes a very long way! This means that one bottle can last for months or even years, so you’ll want to store it under ideal conditions to keep it at its best.

So, do bitters need to be refrigerated?

Bitters do not need to be kept in the refrigerator. The alcohol content of bitters is so high that it acts as a preservative, keeping this deliciously intense flavoring at its best without the need for refrigeration.

It would be highly unusual to come across a bottle of bitters that needed to be refrigerated — most will state on the label that they can be stored at room temperature, both before and after opening.

Can You Keep Bitters In The Refrigerator?

However, in the long term, it would be better to keep bitters at room temperature as the chilly temperatures in your fridge will not do the flavors of this alcohol infusion any favors.

What Is The Best Way To Store Bitters?

Both opened and unopened bottles of bitters should be stored in an upright position with the lid tightly screwed on.

Keep them in a cool and dark place away from direct sunlight and fluctuations in temperature.

One problem with bitters is that the thick syrup-like liquid can sometimes build up around the pouring spout or neck of the bottle.

It pays to wipe the bottle with a clean damp cloth now and again to prevent it from becoming sticky and leaving messy rings on your cocktail bar!

How Long Do Bitters Last After Opening?

Bitters contain a very high level of alcohol and can last for a long time after opening. The most well-known brand, Angostura Bitters, is around 90% proof — that’s stronger than most spirits!

So, although bitters contain organic ingredients in the form of botanicals, the alcohol content acts as a preservative and keeps the concoction shelf-stable at room temperature for many years.

An opened bottle of bitters will stay good for up to five years or more, although the flavor of the botanicals may become more subtle and muted over time.

It is a good thing they last for this long — you only need such a small amount to add flavor that a bottle of bitters can last for many years!

Bitters are based on a strong alcoholic spirit, and like all spirits, they do not go bad. The alcohol acts as a sterilizer and preservative and keeps this flavorful ingredient shelf stable for a very long time.

However, over time the flavor of bitters can become more subtle and less intense, particularly if the bottle is exposed to extremes of heat or direct sunlight.

The bitters will still be safe to drink, but you might not find that they taste as good as you would expect.

Over time, the flavor of the base spirit used to make bitters can also change. This does not mean that the bitters are undrinkable, but you might not find the flavor quite to your liking.

This applies to any high-alcohol beverage, which is a great excuse not to leave opened bottles of spirits laying around on your cocktail bar for too long — throw a cocktail party for your friends and use them up while they’re at their best!

Now we’ve got storing your cocktail bitters all figured out, let’s take a look at some other common cocktail-related questions!

Does simple syrup need to be refrigerated?

Homemade simple syrup should be kept in the refrigerator to prevent mold and bacteria from multiplying. At room temperature, the simple syrup can quickly become contaminated and unsafe to drink.

If your simple syrup is not crystal clear and free from particles or mold, it should be discarded.

The exception to this is if you have an unopened bottle of store-bought simple syrup, which will contain stabilizers to make it shelf-stable at room temperature.

Once the bottle has been opened it is more susceptible to contamination and should be kept in a cool place.

There are many different types of bitters, and figuring out the best bitters for each type of cocktail is a topic that deserves an article in itself! However, some classic cocktail recipes are impossible to recreate without the use of bitters.

The most famous cocktail that uses bitters is the iconic Manhattan — this American cocktail combines rye whiskey, sweet vermouth, and Angostura bitters to create a smooth, intense flavor that should be sipped and never guzzled!

Other well-known cocktails that include bitters include the Negroni (made with orange and amaro bitters) and a splash of angostura bitters in a good old-fashioned gin and tonic.

Best Alcohols For Mixing – Classic Combinations That Are Always Good

How To Make The Perfect Aperol And Soda

The Best Sugar For An Old Fashioned