Can You Eat Curdled Yogurt? – Is It Safe? 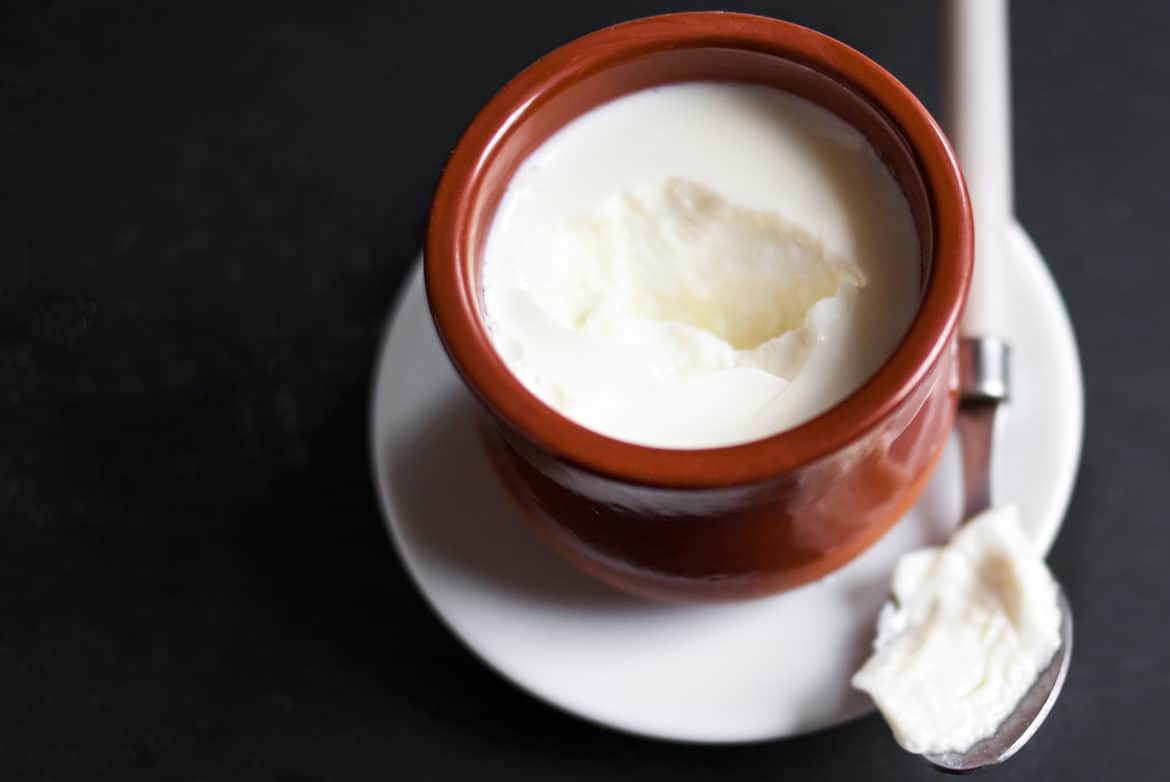 Yogurt can curdle for a few reasons, but the main reason people find their yogurt curdles is when it is exposed to heat.

Curdled yogurt might not be the most visually appealing food, but can you still eat it?

Curdled yogurt is fine to eat if it has curdled from heat. Yogurt might even curdle if it is left to sit in the fridge for an extended period of time. This will appear as a thin layer of liquid sitting atop the rest of the more solid yogurt. This is also perfectly fine to stir back into the yogurt and eat, as long as the yogurt does not have a rancid smell, or has not clumped up like cottage cheese.

If you are adding yogurt into a meal and it curdles, it is still fine to eat. If the yogurt was fine and fresh before being added to the meal, then it would be fine to eat in the meal, even though it has curdled.

There are ways to prevent the yogurt from curdling when it is added to a warm dish. Curdled yogurt will not necessarily taste bad in a dish, but it might affect the texture of the meal overall.

Here is how to avoid yogurt curdling when cooking with it:

Curdled Yogurt In The Fridge

Yogurt might curdle when in the fridge, and this could be due to the lower temperatures. This can appear as a thin layer of liquid sitting on the top of the yogurt. This might not seem like the most appealing thing to eat, but if the yogurt smells and looks fine, you are still able to eat it.

Instead of throwing this liquid away, you should mix it back into the rest of the yogurt. This curdled top layer is a protein that contains many health benefits, and pouring it down the drain is a real waste.

The top layer of the yogurt which appears as a liquid is whey. Whey is a liquid protein that remains after yogurt or milk has curdled.

It contains all nine essential amino acids and is considered a complete protein. The whey that remains after curdling or straining yogurt or the layer of liquid on top of curdled yogurt is called acid whey.

This whey has many different nutritional benefits. It is low in cholesterol and fat, a great source of vitamin B and has a high calcium content. This liquid protein also has a low lactose content and is what gives yogurt the tang and which holds probiotics as well.

It is completely normal for yogurt to separate in the fridge, with the liquid whey separating from the solid yogurt. This also happens as the bacteria ferments milk into yogurt, leaving the liquid whey floating at the top. It isn’t just water, but rather a very beneficial by-product of the fermenting process as well.

When you see this liquid layer form on top of your curdled yogurt, do not throw it away. Mix it back into the yogurt and enjoy all of its great benefits and taste.

How To Tell If Your Yogurt Has Curdled

If you are worried about the yogurt you have sitting in the fridge, there are some simple steps you can take to see if it has curdled or not.

Most yogurts have a slight fermented or sour taste, so it can be difficult to tell whether it has curdled or not. The most obvious way to do this is to check the best by date on the tub, but sometimes this does not help.

Yogurt can stay fresh in the fridge for up to two weeks, and fresh in the freezer for up to two months. If you have opened your yogurt and want to store it for longer, you should seal it in an airtight container to keep out any moisture and air-borne contaminants that can cause curdling.

Here is how to tell if your yogurt has curdled:

Why Does Yogurt Curdle When Heated

Curdling yogurt when cooking is a common complaint in the kitchen. While it is still fine to eat, it doesn’t make for a pretty dish. Yogurt curdles in heat when the protein strands tighten up or congeal.

A non-fat or low-fat yogurt will curdle much easier in heat, as there is not much fat protecting the protein strands from tightening up from direct contact to the heat.

Not only will using full-fat yogurt in meals prevent it from curdling as much as non-fat yogurt, but the full-fat yogurt will also give a richness and thicker finish to the sauce or meal, which elevates the taste much more.

Is it a good idea to heat up Greek yogurt?

Greek yogurt will respond to heat much like any other yogurt, and Greek yogurt is the most commonly used yogurt in cooking.

To prevent it from splitting or curdling, you should temper the Greek yogurt by adding some of the hot meal to the bowl of yogurt, raising the temperature of the yogurt on its own before adding it to the dish.

You should also try to add the Greek yogurt to a meal near the end of cooking, so it does not spend too much time on the heat, and it can give the dish a creamy texture.

Does heating yogurt kill the bacteria?

Yogurt is made by heating, cooling and fermenting milk, done by using healthy bacteria such as streptococcus and lactobacillus.

Yogurt can be consumed both hot and cold, but if the yogurt is heated past a certain point, these healthy and beneficial bacteria will be killed off and the yogurt will not be as nutritious or healthy as it is intended to be.

Curdled yogurt is completely fine to eat, as long as it does not have a bad smell or noticeably bad texture. Yogurt can curdle by sitting in the fridge, or by being heated up too much while cooking. It might not look as appealing as you would hope, but if the yogurt was fine before adding it into a meal, it will be fine to eat after.

Remember, if there is a thin layer of liquid on the top of your yogurt, stir it back into the solid yogurt to ensure you can benefit from all the health benefits it holds!

Up Next: Can You Freeze Yogurt? – The Ultimate Guide