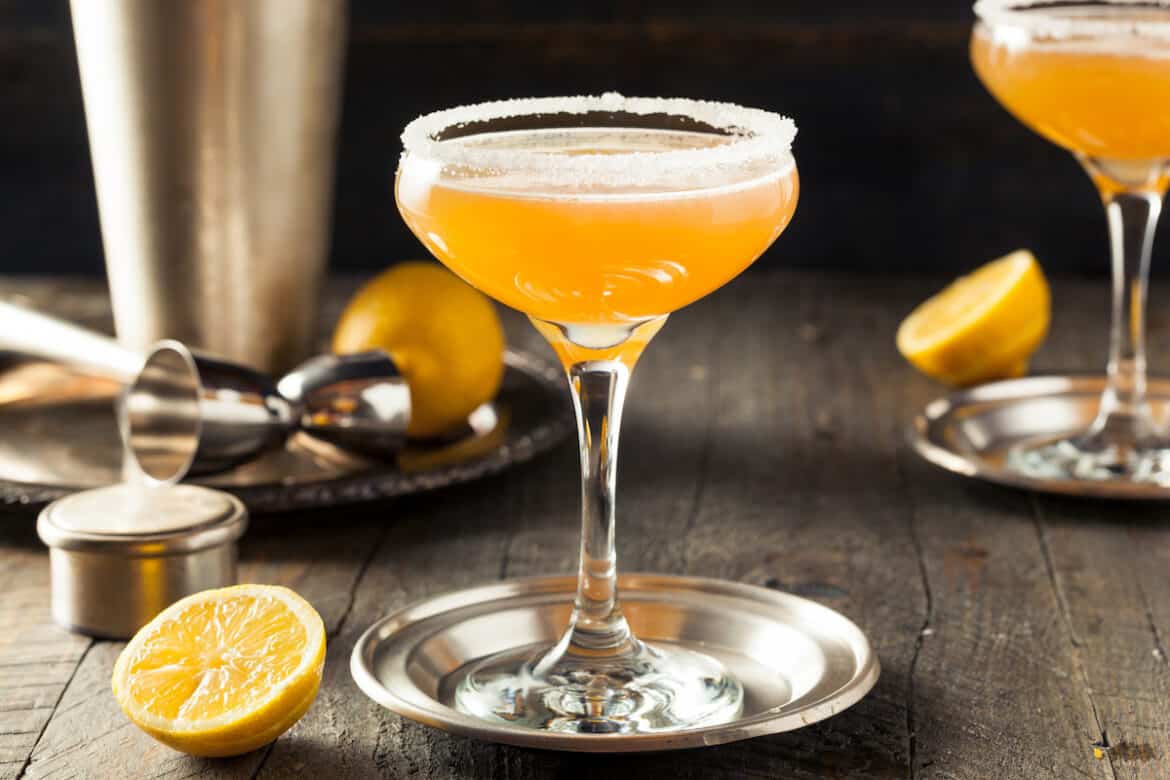 Cointreau makes a great cocktail, but it’s also called for in a wide variety of baking and cooking recipes as well. If you’ve got your heart set on making a specific dish but find yourself without this specialty alcohol, there are a few alternatives that you can reach for instead.

In this article, we’ll explain exactly what Cointreau is and your various options for substituting it both in cooking or baking and in cocktails.

Cointreau is an orange-flavored liqueur, made from the peels of sweet and bitter oranges alongside alcohol made from beet sugar. It’s quite strong-flavored, colorless, and just sweet enough to make the fire of the alcohol worth the burn.

It’s often enjoyed as an aperitif or digestif, consumed either before or after meals to aid digestion. It’s also the signature flavor in several iconic cocktails.

Cointreau is also called for in a variety of baked good and savory dishes, from pancakes or brownies to a rich and succulent sauce for roast duck.

The signature orange flavor can be found in a select variety of alternative liqueurs or if you don’t want to use alcohol at all, flavored extracts.

There are a few cocktails that you’ve at least heard of, if not enjoyed yourself on a night out, but there are also a few Cointreau cocktails that fly under the radar. They’re worth challenging your bartender with or finding the recipe for your home bar.

Here are our favorite Cointreau cocktails, tested and approved for full enjoyment:

Whether you’re substituting Cointreau in a baked good or a cocktail, there is sure to be a substitute on this list that will meet your needs. We’ve created a quick reference chart for you and then gone a bit more in-depth on each option for substitution.

Cointreau is a type of Triple Sec, arguably the most famous, but it is produced from a specific distillery in France, named for its original owner, Édouard Cointreau. It is the original recipe of it’s kind, but now competes against many, many other Triple Sec liqueurs of varying qualities.

Cointreau is perfectly balanced, meaning it’s not as sweet as many other liqueurs, and it’s completely clear and measures 40 percent alcohol by volume (ABV), also known as 80 proof.

Triple Sec is any clear liqueur made from distilling orange peels in neutral alcohol, usually made from sugar beets. The range in ABV is 20% – 40%, but usually on the higher end and some even edge up to 42% if they’re of really high quality.

You can substitute any Triple Sec in exact quantities for Cointreau, but discerning palettes may taste the difference in quality.

Cointreau is a French liqueur whereas Curacao gets its name from its Island of origin, a Dutch Caribbean island off the coast of Venezuela called Curacao. The island has historically been a perfect breeding ground for bitter oranges.

Since this fruit wasn’t fit for consumption, the peels would be dried and used to add flavoring to their local distilled spirits.

Curacao is thought to be the original orange liqueur, with Cointreau being inspired by it and, according to its inventor, perfected. Since Cointreau coined the term Triple Sec, it creates an odd time-loop type of situation.

Curacao is often considered a Triple Sec, even though it was the original inspiration for this type of liqueur.

A true Triple Sec, specifically Cointreau, will be dryer and less sweet than a true Curacao, though some brands toe the line too close to distinguish between them.

The ABV of Curacao is anywhere between 15% – 40% and though the alcohol itself is initially clear, it has developed as a brand by using artificial coloring to make the liqueur either blue or orange.

You can substitute Curacao for Cointreau in any recipe, though it may result in a slightly sweeter flavor.

Grand Marnier is another orange liqueur, but unlike Triple Sec and Curacao, it’s made with a high-quality brandy, rather than a neutral spirit. This creates a flavor that stands out not just for the bright orange notes, but also for the aged, oaky, and intense quality of the brandy.

Grand Marnier is also exclusively flavored from the peels of one type of bitter orange, whereas Cointreau combines bitter and sweet oranges from a variety of fruits.

Grand Marnier makes a good substitute for Cointreau, but not perfect. It does have a deeper, distinct flavor and a more golden color, so it shows up more prominently in cocktails. If used for baking, it’s unliking you’ll notice much of a difference and you can substitute ounce for ounce.

Some bottles of alcohol are boldly labeled as Orange Liqueur and it may not be immediately apparent what category they fall into. It’s highly likely they’ll be a Triple Sec, though the alcohol content and sweetness will vary depending on the brand.

Depending on what you’re using it for, you can substitute any orange liqueur for Cointreau but make note of a few factors before you make your decision:

If you’re looking for a non-alcoholic substitution for Cointreau, you can use just about anything that will give you an orange flavor, though quantities will vary widely.

You could use orange juice, for example, but that will be much less flavor for the same amount of liquid, so it would be better to reduce it to a syrup first. You can also use orange zest or orange juice concentrate and experiment until you get the flavor you’re searching for.

For most baking purposes, the best non-alcoholic substitution for Cointreau will be orange extract.

It will give you a potent flavor in a very small measurement of liquid. You may need a bit of trial and error but start by substituting with a ratio of ½ teaspoon of orange extract for every 2 tablespoons of liqueur called for.

Baking with a liqueur is all about getting the right flavor since the alcohol burns off. To find the best orange liqueur for baking you have to decide on the right balance between convenience, expense, and flavor.

If you have an orange liqueur in your liquor cabinet right now, that’s the best choice for your baking project. There’s not so much difference between them to merit a special purchase, so use what you have available, if any.

If you’re making a special trip to the liquor store, Triple Sec is generally the lowest priced option, easiest to find and, again, once baked you won’t be able to tell the difference so you may as well save yourself a few dollars.

If you’re planning on having the rest of the bottle to make cocktails out of, the real question is going to come down to one of personal preference.

Which tastes the most appealing to you? If you’re not sure, Grand Marnier is by far the most popular and commonly purchased orange liqueur though it’s also often the priciest option as well.

What is Cointreau noir?

Cointreau Noir is a blend of the traditional orange-flavored liqueur with the company’s signature cognac.

There are also hints of walnuts and almonds, making it highly dangerous to the nut-sensitive crowds, but adding a layer of complexity to the alcohol itself. Noir is designed to be enjoyed neat or, at the most extreme, over ice.

Since Cointreau is made by distilling orange peels with beet sugar alcohol, there are no grains involved and the liqueur is naturally gluten-free.

What is Cointreau sauce?

Cointreau makes a rich, decadent base for a sauce that can be either creamy or fruity and syrupy. It’s most often used for desserts or pancakes, but it also features in certain savory recipes, such as roast duck.

Essentially, the liqueur can be used in any sauce that you want to develop a rich undertone of orange. The alcohol content burns off during the cooking process so, even though it’s a liqueur, it’s still kid-safe.

Up Next: The Best Substitutes For Orange Extract

The 5 Best Salts For Brining

The Best Olive Oil For Salads