Home Foodsguy Ciabatta Vs Sourdough – What’s The Difference?
FoodsguyThis vs That

Ciabatta Vs Sourdough – What’s The Difference? 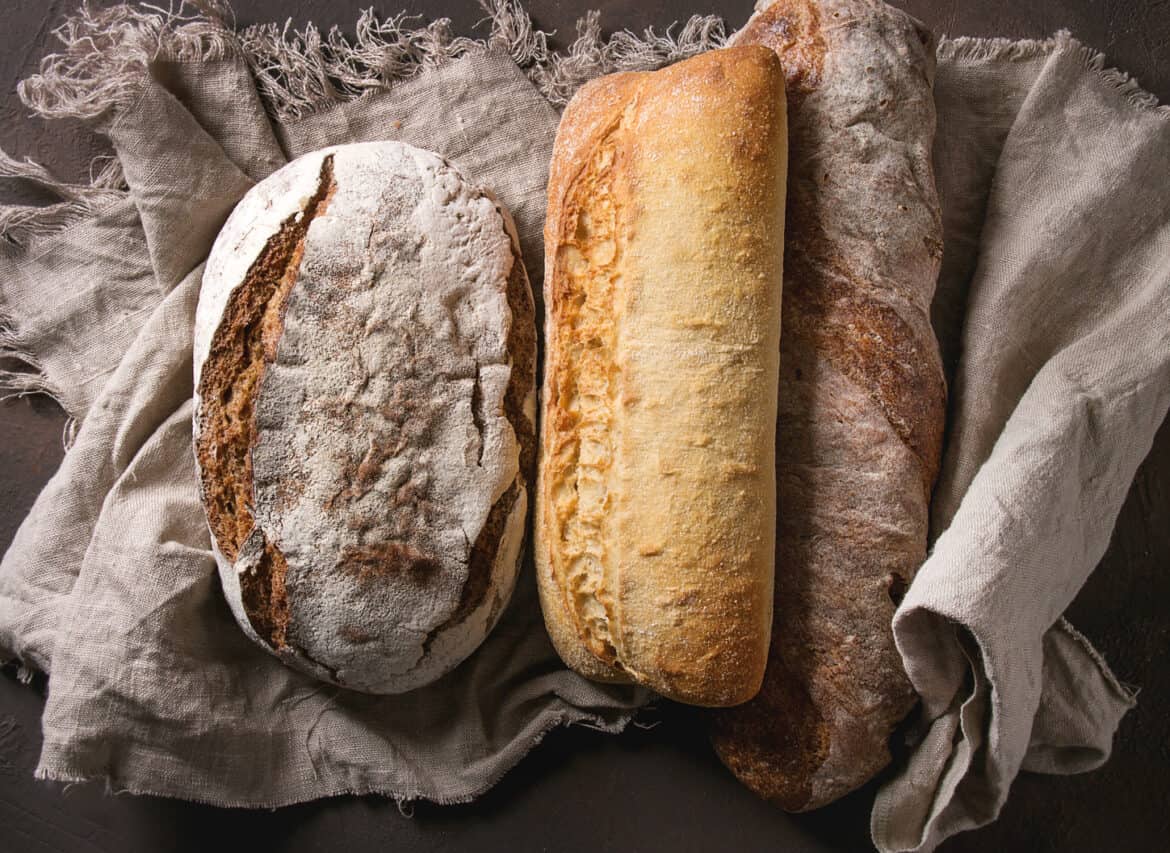 There are so many different types of bread that all seem to be made with the same basic ingredients and yet somehow bake into completely unique and mouthwatering loaves. Ciabatta and sourdough are popular variations, but do you know what makes them distinct?

Ciabatta, as you can probably tell, is Italian, but is that the only thing that separates these two breads?

Ciabatta is often used for creating the perfect sandwich. It’s made with flour, salt, yeast, and water and usually baked up into oblong loaves of flattish bread. The one thing ciabatta used that most other standard bread doesn’t, including sourdough, is olive oil.

Sourdough bread is also often baked into round loaves and made from flour, salt, water, and yeast but, in this very unique bread, the yeast is a live, wild culture made from flour and water and cultivated into a sourdough starter.

There are a few other important differences between ciabatta and sourdough bread which we discuss in the article below, so keep reading.

What is Ciabatta Bread?

In Italian, ciabatta means ‘slipper’ which is a nod to the flat, round or elongated shape of the bread, especially when sliced.

Because it’s Italian, many people assume it’s a very traditional style of bread, but it was first made in the 1980s, so it’s actually a rather modern bread. It’s made almost exclusively with white flour which is not very ancient at all.

Ciabatta was one Italian baker’s answer to constant requests for the popular French baguette, which was made with white flour. It is different from the baguette, however, in shape as well as due to the signature air holes.

The dough for ciabatta is made with high-gluten wheat flour, which isn’t unusual for bread, but the dough is wetter than a traditional baguette style of bread, mainly due to the olive oil added.

American ciabatta bakers will often use a biga or starter, which is similar to what you would find in sourdough bread. For ciabatta, however, the starter is not fermented very long so the flavor doesn’t develop as strongly as in a sourdough.

Whether or not a biga is used, ciabatta is the preferred bread for making paninis, which are Italian-inspired toasted sandwiches.

The olive oil used in ciabatta does add some flavor, however, it’s mild and most ciabatta is quite understated, enjoyed for its texture, and what it holds between its slices rather than the flavor of the bread itself.

How Do You Make Sourdough Bread?

Sourdough is a type of bread made from a slow-fermented live “wild” yeast starter instead of dry yeast. The signature sour flavor is developed by the fermentation of flour and water and the bacteria that grow in the process.

Even coming from the same starter, no two loaves of sourdough bread will ever taste the same.

Because it’s such a rewarding process, we’ve dedicated an entire article to help you choose the best flour for making a sourdough starter.

Sourdough is often considered to be one of the healthiest types of bread, despite being made with white flour. Because of the fermentation process to create the starter, it is a probiotic food, which is good for the healthy bacteria living in your gut.

Considering bread is usually vilified for causing damage to your gut, count this a big win for sourdough bread.

Because sourdough has such a signature, tangy flavor, it’s often eaten for its own merits, merely warm or toasted and with a bit of butter. Of course, it brings a lot of character to sandwichs, stuffings, or even French onion soup.

Technically a sourdough starter is only made with flour and water as well.

However, when it’s used in the bread the bacterial development has created a natural, live wild yeast that replaces the dry yeast called for in most other types of bread.

Because sourdough is such a seemingly simple recipe, choosing the right recipe to make sourdough bread is important. Here are our favorite sourdough books to get you started on your bread-baking journey.

To sum things up, here’s a chart comparing ciabatta (with or without biga) and sourdough:

Up Next: How To Store Homemade Bread – The Ultimate Guide