Home Foodsguy Chicken Vindaloo Vs Tikka Masala – What’s The Difference?
FoodsguyThis vs That 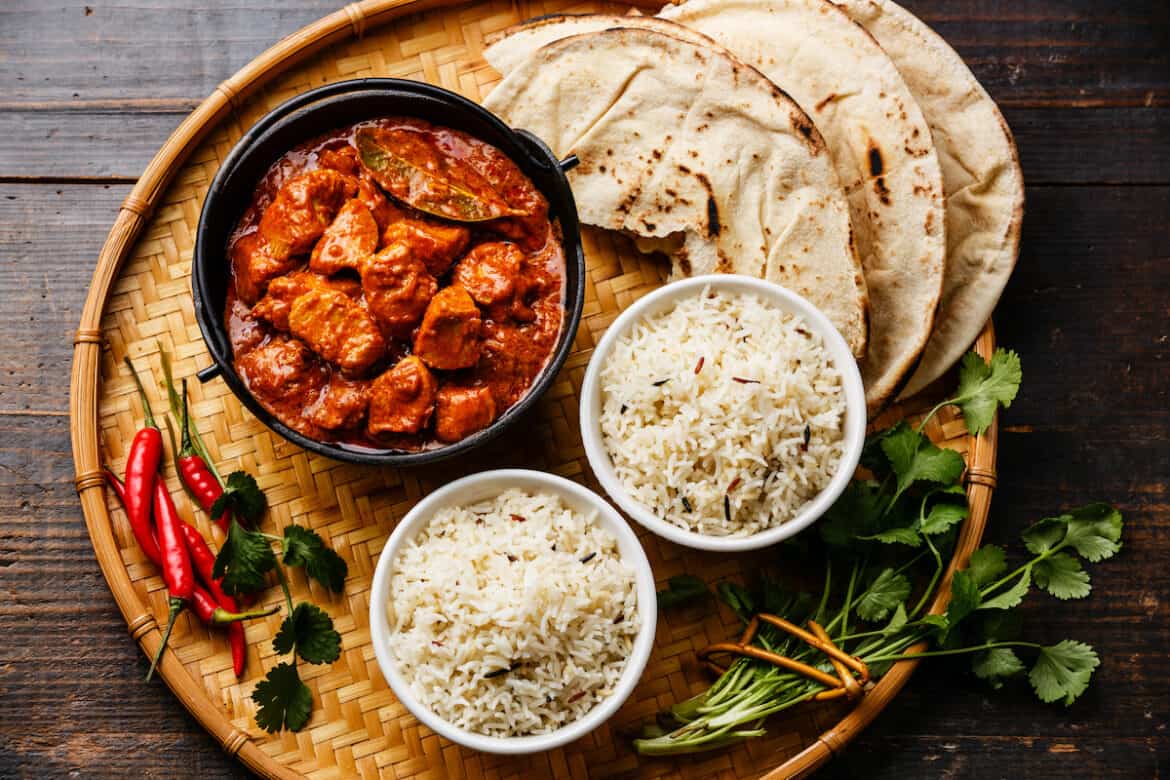 There are very few things as popular as tikka masala. This recipe has several variations but its taste remains iconic! It can be said to be the perfect example of Indian cuisine as it includes many popular Asian spices.

On the other hand, chicken vindaloo is an equally loved dish around the world!

While its origin isn’t from Indian cookbooks, it has been adopted by Asian cuisine and given a thorough spice treatment through many adjustments to its recipe.

Chicken vindaloo vs tikka masala, how do you tell them apart? Chicken tikka masala has fried or barbecued boneless chicken pieces along with roasted garam masala spices and a tomato-based gravy while chicken vindaloo is a spice-based curry that uses bone-in chicken meat and has a tangy and spicy flavor.

Read below to learn more about these two yummy recipes, how they are similar, how they differ, and how you can make them at home within 15-20 minutes!

Tikka masala originates from India but isn’t exactly from India.

Back in the 1960s, there was a huge influx of Indian immigrants that settled in Britain. Among these immigrants were extremely capable chefs that held with them the secrets of Indian spices and delicious curry-based recipes.

These chefs are thought to have invented the basic version of tikka masala in Britain to cater to the needs of the local people.

Since the people of Britain couldn’t incorporate dry paste into their everyday diet, the chefs came up with a tomato-based curry that combined roasted garam masala spices, herbs, and deep-fried onions.

Tikka masala blew up in popularity with the opening of new Indian restaurants in the European region and today it is widely known as a delicious curry that can be served with either flatbread or aromatic rice.

Tikka masala can be whipped up within minutes too which makes it a great dish to serve at street-side kiosks and even upscale restaurants. It is similar to butter chicken but it doesn’t use a lot of dairy products apart from yogurt.

This dish has a very rich flavor that balances spices, herbs, and sweetness.

Since it is tomato-based, it has a slightly sour and umami-laden flavor. Its curry is thick and makes for a very satisfying bite when combined with chicken chunks.

Visually, the color of this dish is more orange due to the added spices and tomato puree.

Interestingly, a survey showed that there are more than 40 variations of this recipe and they all have just one thing in common: the use of chicken!

Regardless, whichever recipe you go with, one can easily detect and pick up on the flavor notes in tikka masala as it uses many spices like garam masala, coriander, cumin, nutmeg, and more.

Vindaloo is originally a Portuguese-based dish that was adopted in India.

Centuries ago, Portuguese sailors carried with them barrels full of meat mixed in a concoction of wine and garlic to preserve and add flavor to the food. The sailors eventually found a home in a coastal state called Goa.

The locals took the brined meat and added a mix of Indian spices which gave birth to Vindaloo. This spicy, gravy-based dish was also an instant hit and resonated with the taste palettes of both the locals and the foreigners.

It was so popular that many travelers took the recipe across the seas, and thus began the journey of vindaloo!

Chicken vindaloo doesn’t traditionally use onions or tomatoes. Rather, it relies on garam masala, whole spices, and vinegar to marinate the meat and to flavor the curry. Like tikka masala, there are several variations of this dish too.

Some use tomato puree and onions to lessen the spiciness while others may add a bit of yogurt to curb the heat. If you want to enjoy this dish then we suggest that you make it the traditional way – without onions and tomato paste.

Vindaloo has a slightly sour and spicy curry with a smooth consistency. Compared to tikka masala, which contains caramelized onions, this curry doesn’t have a grainy texture and is spicier.

Also, since vindaloo uses bone-in meat, it has a more distinct chicken flavor due to the extraction of bone broth during the cooking process.

Plus, since the meat is also marinated beforehand, you get a distinct flavor from the chicken meat and spices too!

Visually, vindaloo has a reddish color due to the use of dried red chilies but its color can vary from reddish-brown to reddish-orange with the addition of other ingredients like tomatoes and onions.

To understand and contrast both dishes, we need to take a look at how they are made and the ingredients each recipe uses.

Let’s first start with the all-time favorite of many people: tikka masala! To make a quick serving of tikka masala you will need:

Since this recipe doesn’t require marination, you can prepare it in under 20 minutes or even sooner if you have the spice mix prepared beforehand.

There are many prepackaged tikka masala spice mixes available in the market, but you can also make your own by following the above recipe and storing the mixture in the fridge for about 4-5 days.

Now let’s take a look at how chicken vindaloo is made. This is a classic recipe but we will also include optional ingredients like onions and tomatoes for people who want to curb the spiciness of this dish.

Here is what you’ll need:

If you find this recipe to be a bit too spicy then you can add the optional ingredients next time to adjust the flavor.

Here are a few more related questions we thought you might have had regarding both these amazing dishes!

Can you use tikka masala to make butter chicken?

Yes! Since both recipes use the same spices and tomato-based gravy, you can use tikka masala as a base and add in the dairy ingredients to make something that tastes very similar to butter chicken.

How long can you store chicken vindaloo marinade?

You can store the marinade in an air-tight container in the fridge for 3-4 days at 40°F.

You can also freeze the marinade after first letting it sit for 8 hours in the fridge at 0°F for 1-2 months.

Up Next: Burnt Brown Butter – Can You Save It?