Home Foodsguy Chicken Drumsticks Vs Thighs – What’s The Difference?
FoodsguyThis vs That 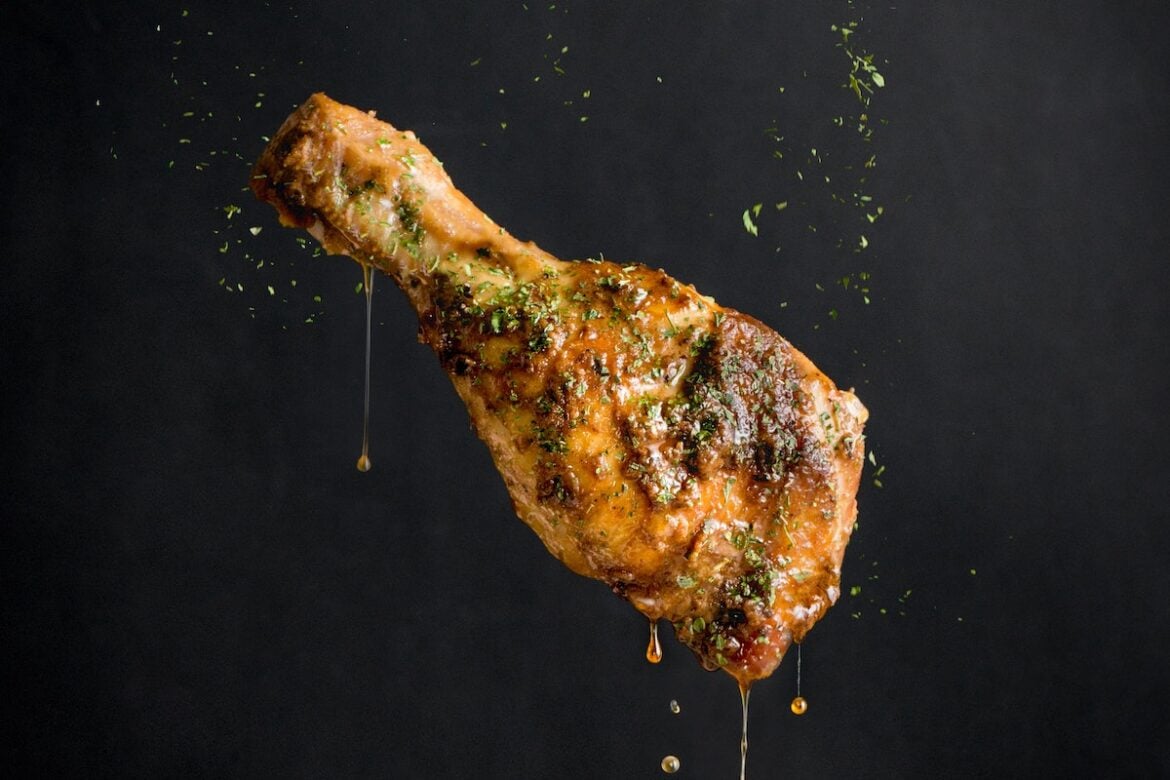 There are a lot of delicious parts in a chicken but if you are after a satisfying bite and deeper flavor then no other part can come close to chicken drumsticks and thighs.

But what is the difference between chicken drumsticks vs. thighs? A chicken drumstick and thigh form the entire leg section of a chicken. The thigh has more muscle and fat than the drumstick that is connected directly below it.

Read below to learn more about both these juicy pieces of meat and their differences!

To put it simply, no. The leg section of the chicken consists of two parts: the drumstick and the thigh.

If you were to order a chicken leg at a restaurant then you would likely receive two pieces of meat (i.e., drumstick and thigh) combined via a joint.

The thigh piece is made up of a hipbone and a slightly elongated boney part called the femur.

The femur holds the majority of the thigh meat while the hipbone has some meat on it and is connected to the body of the chicken.

Fun Fact: The hipbone (thigh) also contains the chicken’s kidney which adds to the overall flavor of the meat. While some people don’t enjoy cooking it and will have it removed, it can add a whole new dimension of flavor.

The kidney is found underneath the hipbone and is situated inside a boney pocket.

Both thigh and drumsticks contain dark meat and have a higher fat content, thus making them juicier and tastier than the other sections of the chicken, such as breast meat.

The drumstick consists of a kneecap and tibia that connects further down to the feet of the animal.

The kneecap is where the drumstick connects to the thigh and just like the femur in the thigh section, the tibia is what holds the majority of the meat on a drumstick.

Chicken legs have a wide variety of uses. they are fantastic for stocks and can also be fried, grilled, BBQed, steamed, and more.

In fact, the drumstick and thigh section are arguably the most recognizable pieces of a chicken thanks to their wide usage in fast food!

Here are some of their characteristics:

Thigh meat tastes just like drumstick meat. This isn’t surprising because both of these meats are considered to be the same type of dark meat.

However, the thigh piece also contains a lot of chicken fat when compared to the drumstick.

In the case of chicken thighs, the majority of the fat can be found on the hipbone.

Also, if you flip the hipbone and look closely, you will find a piece of the chicken kidney inside a pocket, which is located on the right side. The kidney adds a dry but delicious flavor that some find to be an acquired taste.

Chicken kidney is prized for its texture and is considered to be one of the reasons why thigh meat is preferred in a variety of dishes, especially in Asia.

The size of the thigh varies from chicken to chicken, but in general, the leg section of the chicken is considered to be a fairly large piece.

In many cases, the leg can also be divided into three sections where the hipbone, femur, and drumsticks are sold separately.

All of the meat on the thigh has a tender and somewhat rubbery texture to it due to the presence of fat, but once cooked, thigh meat can be very tender and super juicy!

The hipbone has a lot of uses in stocks since it majorly consists of bone and a little meat, however, the hipbone can also be grilled or BBQed, especially for the chicken kidneys!

The femur, which holds most of the meat in the thigh section can be used to make fillets too. It can also be chopped into boneless pieces.

Did You Know: Many manufacturers tend to use thigh meat for sandwiches and burgers because it offers way more flavor and works well with spices and herbs than breast meat.

Drumsticks are universally recognizable and are known to be juicy and tender. The dark meat on the bone provides a very distinct flavor but is considered the same as the rest of the chicken leg.

The drumstick is made up of joints, tendons, bones, and dark meat. While the drumstick does not contain a lot of fat, it is still incredibly juicy and flavorful thanks to the fat-rich meat around it.

The kneecap of the chicken is also edible and provides a distinct crunch and can take on any flavor you add to it!

When compared to the thigh, chicken drumsticks may contain a bit less meat, but it is still beloved for their ease of use, texture, and flavor.

The drumstick is easy to grab and provides a very satisfying bite.

While there is no correct way to eat a drumstick, most people prefer to grab on to the bottom section of the drumstick and then eat their way to the bone in the middle!

If you look closely, you will find a few tendons on the drumstick. These tendons are usually removed but a small part of it may still remain on the chicken.

The tendon is very chewy and has a rubbery texture. Meanwhile, the kneecap provides an incredible crunch and will taste even better when there is breading or a layer of chicken skin on it!

Here’s an easy comparison between the chicken thigh and drumstick:

Why Are Chicken Legs Called Drumsticks?

If you are familiar with musical instruments, specifically the drums, then you would know exactly why drumsticks are called what they are!

Drumsticks look more or less like the same accessory used to beat a drum, hence, their name.

Also, most people would just call the drumstick a “leg piece” which is both technically wrong and can also confuse the waiter taking your order at a restaurant.

Remember, the drumstick and the thigh are separate pieces that are connected together. They are usually sold separately and each has different uses. Knowing this difference can also help you make better dinner decisions too!

For example, when making a fillet sandwich you can ask the butcher for the thigh meat located on the femur. While if you were to make a stock, then you can use the hipbone by separating it from the femur via cutting through a joint.

To separate the entire thigh piece and the leg, find the joint located on the kneecap of the drumstick and then slice through at an angle to easily separate both pieces!

Needless to say, the next time you get confused between the thigh and the drumstick, just ask yourself, what would you use to play the drums?

This should help you quickly draw a mental picture of the drumstick and separate each section of the chicken leg!

Both the chicken thigh and drumsticks are iconic pieces of meat that have been used for centuries in many different and delicious ways.

However, due to their similarities, it can become easy to get confused between the two when talking about the leg section of the chicken.

Now that you know the difference between the two, here are some related questions!

Can you cook the whole leg of a chicken?

Yes, the entire leg section of a chicken can be cooked at the same time. In fact, in some cases, you won’t even need to separate the two.

Ask your local butcher to leave the thigh and drumstick attached, this will allow you to grill or fry the chicken leg and create various fulfilling recipes!

We wouldn’t recommend boiling the whole leg for the stock since you can use the meat separately and just add the bones as a foundation for the stock. A better alternative would be to use chicken necks with the leg bones instead!

Do chicken legs come with the feet of a chicken?

No. The feet of the chicken are always removed from the drumstick as there is very little utility in them since they consist of only some skin, cartilage, and bone.

If you still want to use chicken feet, then you would have to ask your local butcher to separately throw in a pair of feet with your order.

Do chicken thighs take longer to cook than legs?

Both pieces of meat take about 30-45 minutes to cook at 350°F in a conventional oven.

The cooking time also depends on the size of the chicken and the quantity of the meat on the bone. In general, always cook the chicken until the internal temperature reads 160°F.

Up Next: Can You Smoke Frozen Meat?

Can You Smoke Frozen Meat?

How To Tell If Frozen Salmon Is Bad