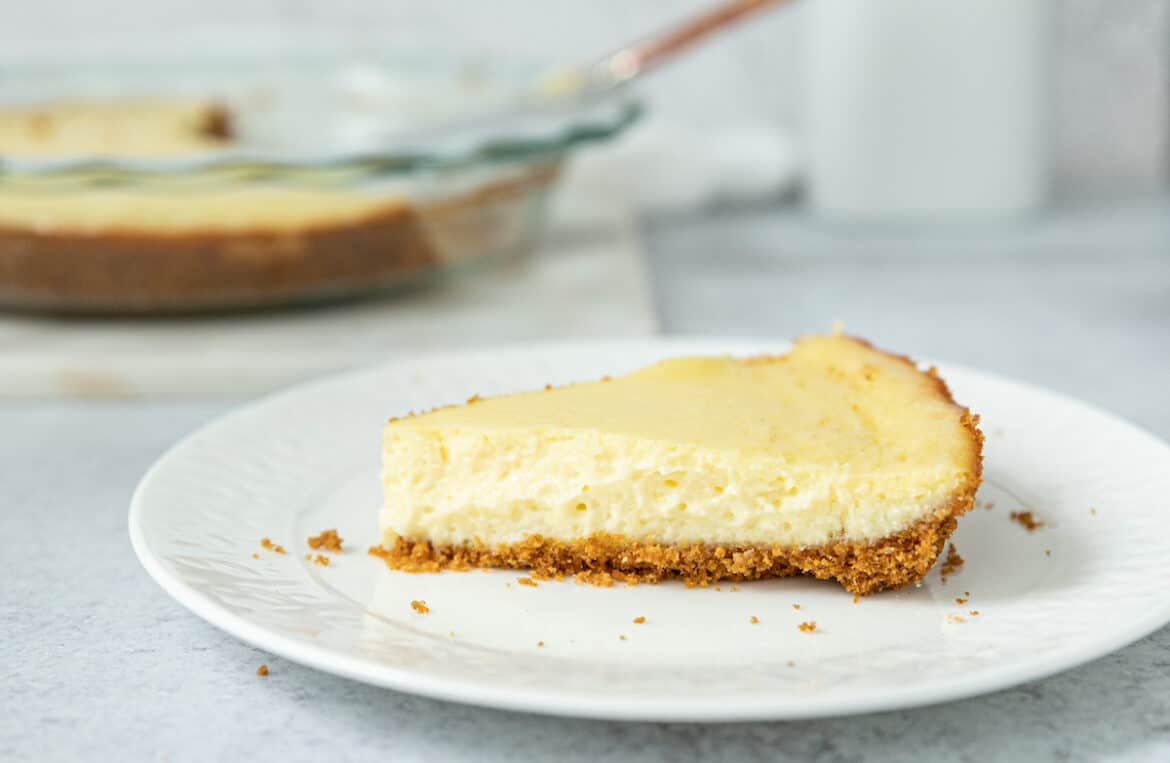 Cheesecake is one of the irresistible desserts. It’s creamy and rich and delicious on its own or with a variety of toppings. There are endless ways to flavor a cheesecake but the classic cheesecake is still so delicious and incredibly popular.

If you’ve ever looked up a cheesecake recipe you might immediately be too intimidated to try and bake one. Many cheesecake recipes are delicate and need to be cooked evenly which requires a water bath. Obviously this is a lot different than baking a regular cake and just the sound of it can be exhausting.

The good news is that there are actually many different kinds of cheesecake that you can make that are all equally delicious.

Cheesecakes can vary in texture and flavor but there are even no-bake cheesecakes that are also very good!

This recipe is quite easy, no water bath required! It doesn’t require sour cream, just cream cheese. With fewer ingredients and less care needed it’s a quick and simple cheesecake recipe that even inexperienced bakers can make.

New York cheesecake is incredibly popular but like many popular New York recipes, it’s actually much older than the city itself.

There is some evidence that cheesecake was actually made in ancient Greece.

However, this recipe was likely different than the type of cheesecake that we are most familiar with.

Cream cheese was not added to cheesecakes until the 18th century in the United States. The New-York-style cheesecake was eventually developed which has its own distinct texture and flavor.

Over the years, different states and countries have developed their own styles of cheesecakes. Some contain different cheeses like ricotta or feta, and there is a lot of variation in texture.

Sour cream is created by adding lactic acid culture to cream. It becomes sour and thick through this process. It’s used in baking, cooking, and also as a topping for different dishes.

In baking, sour cream helps to create a certain texture and slightly sour flavor to recipes. It can be used to create a creamy texture or to add moisture to different types of cakes. The acidity in sour cream can also be used to activate baking soda in some recipes.

It can be difficult to simply substitute sour cream in a recipe that calls for it. However, this cheesecake recipe was created to not contain any sour cream, which is why it is not needed.

For the flavor in this recipe, I have added just a small amount of lemon juice to help add a slightly tangy flavor.

If you want more tips like this, and to learn how to make the most amazing homemade cheesecakes, I found this book on Amazon, and it’s absolutely the best cookbook for cheesecakes.

Toppings for Cheesecake Without Sour Cream

Although this cheesecake is great on its own, if you want to spice things up there are lots of options.

Here are some of my favorite cheesecake toppings:

While baking the cheesecake, you can use a crust shield to help ensure that the crust will not burn before the inside of the cake is cooked. This is our favorite crust shield to use.

If you don’t have a crust shield, you can simply add aluminum foil strips around the outside of the pan.

How to Make Cheesecake Without Sour Cream

Gather the ingredients and preheat the oven to 350°F.

Stir together all of the crust ingredients, starting with the melted butter, and mix thoroughly.

Press the crumbs into the bottom of a 9” pie pan that is 1 ¼” in height and work some of it up into the sides of the pan.

To prepare the filling, mix together the softened cream cheese and sugar with an electric mixer on low speed until smooth and combined.

Add in the eggs, vanilla, and lemon juice and mix until smooth.

Add the pie filling to the pan on top of the crust.

For the graham cracker crust:

For the pie filling:

Stir together all of the crust ingredients and mix thoroughly.

Press the crumbs into the bottom of a 9” pie pan that is 1 ¼” in height and work some of it up into the sides of the pan.

To prepare the filling, mix together the softened cream cheese and sugar with an electric mixer on low speed until smooth and combined.

Add in the eggs, vanilla, and lemon juice. Mix until smooth.

Add the pie filling to the pan on top of the crust.

Up Next: Lemon Meringue Pie Without Cheesecake

Starch Vs Flour – What’s The Difference?

Can You Refreeze Frozen Vegetables – Is It Safe?

Hi Jaron, Love your blogs… They actually help me at times have I ingredients missing and I don’t wanna loose hope in cooking… Thanku and your recipes are great.😊

So glad you found them helpful! 🙂

Hi! My sister followed your recipe and she made the best cheesecake I’ve had! Thank you for posting simple recipes with alternatives 🙂 Can’t wait to try more of your recipes.

Hey! Thanks for the help with this recipe, I’m always looking for amazing cheesecake recipes and unfortunately I didn’t have sour cream this time so you’re awesome!