Home Foodsguy Cast Iron Smooth Vs Rough – What’s The Difference?
FoodsguyThis vs That 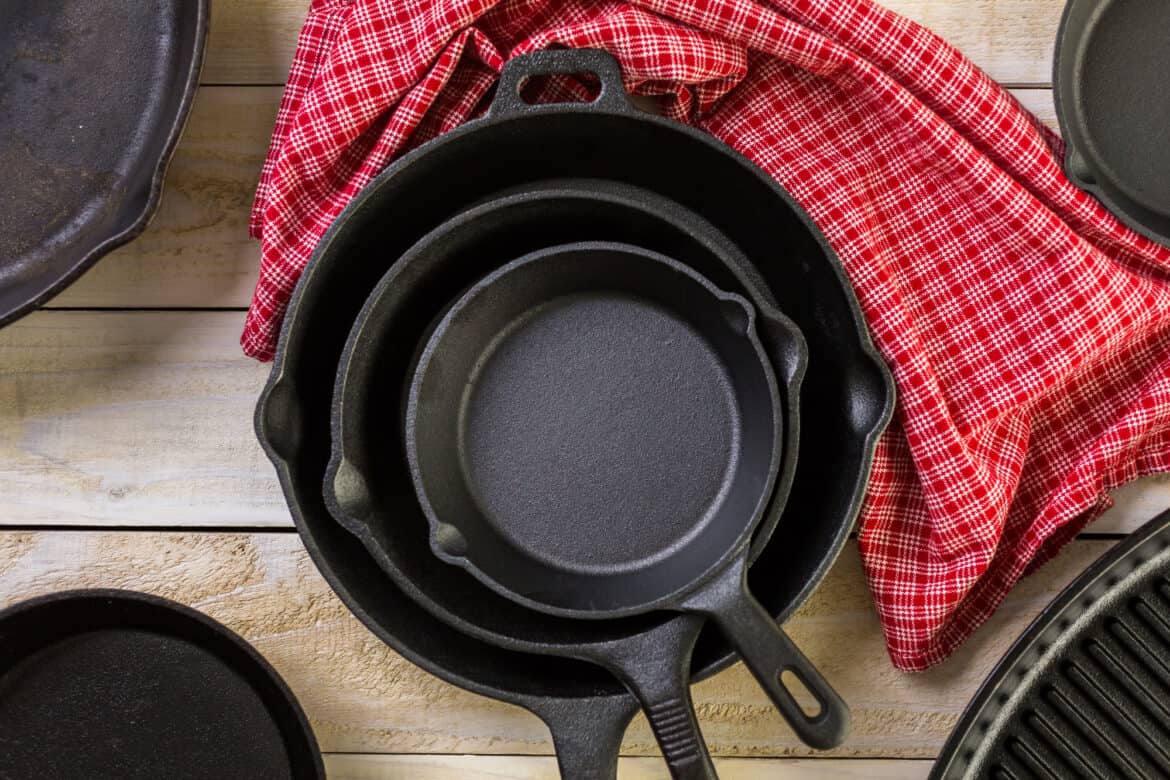 If you compare your vintage cast iron skillet with a cast iron pan manufactured by a modern cookware brand, you may be surprised at their texture differences.

Why do modern cast iron skillets have a rough texture as opposed to the smooth surface of their older counterparts?

Continue reading to learn if smooth or rough cast iron is better and how to grind down pebbly cast iron pan to make it smooth and polished.

Where Do the Texture Differences Come from?

Some cast iron skillets have a smooth surface while others are pebbly and slightly rough. Why is there such a big difference in texture?

The old cast iron making technique implied pouring the melted iron and steel into the mold and then removing and grinding down the pans by hand.

This intricate process of manufacturing cast iron skillets took several days. The result was cast iron cookware with a smooth and shiny surface.

Another difference between smooth and rough cast iron is that modern-day cast iron pans come pre-seasoned, which was not the case back in the 1900s.

Note that this doesn’t mean you can just buy a pre-seasoned pan and rest easy – these pans still require consistent seasoning after the first use. We have another article on the best cast iron seasoning oils if seasoning is your main concern.

According to cast iron cookware manufacturers, in the late 20th century the number of people who preferred smooth cast iron skillets over rough ones kept decreasing.

So, many discontinued the production of smooth cast iron and started producing cookware with a rough surface.

The latter also costs less, as the manufacturers eliminated the polishing step, which used to be done by hand and therefore required more work, time, and laborers.

So, the changes in the manufacturing technique are the main reason why your grandma’s cast iron skillet is smooth while the one you bought online has a rough texture.

Which One Is Better – Smooth or Rough Cast Iron?

There are fierce debates among professional and amateur cooks whether smooth or rough cast iron pans are better.

Modern cast iron manufacturers claim that the pebbly texture helps the oils to adhere better to the pan. This makes it easy to season and take care of cast iron.

Seasoning smooth cast iron skillets requires more effort as the oil doesn’t adhere to it easily. However, many cast iron cookware aficionados claim that it is certainly worth it.

They say a smooth pan that is well-seasoned is exceptionally non-stick, though both smooth and rough cast iron pans are meant to be non-stick.

With this being said, it is ultimately a matter of proper maintenance. Whether your pan has a smooth or rough finish, cleaning and seasoning it properly is what lets it maintain it’s non-stick properties.

Can You Smooth Out a Rough Cast Iron Pan?

Whether it’s for nostalgia or personal preference, you may want to smooth out your rough cast iron skillet yourself.

If you are using a metal scraper and other utensils to cook in your cast iron pan with a rough finish, you can expect it to become smoother over time. But if you are impatient about cooking in a smooth cast iron pan, you can try sanding it.

You can use either a hand sander and a sanding block to grind it down. If you don’t have an electric grinder, get 80-grit sandpaper. Using sandpaper will obviously take more time and effort.

However, you can still achieve a smooth and polished result by hand sanding.

There is no need to remove the seasoning of the pan before you start grinding it down. This step is unnecessary, as the seasoning will be removed during the sanding process anyway.

Additionally, you will have to use chemicals to remove it before sanding, which is certainly not good for the pan.

When sanding the pan to make it smooth and polished, don’t go overboard. If you sand the pan so much as to thin out the cooking surface, it may simply crack as a result of weakened rigidity.

Additionally, make sure to sand the cast iron pan evenly, as you could end up with a surface that’s too thick or thin in some areas, resulting in uneven heat distribution.

Up Next: Cast Iron Sticking After Seasoning

Chicken Vs Tofu – What’s The Difference?

Bread Too Dense? – This Is Why