Home Foodsguy Can You Freeze Jambalaya? (And How To Do It)
FoodsguyFreezingHow To

Can You Freeze Jambalaya? (And How To Do It) 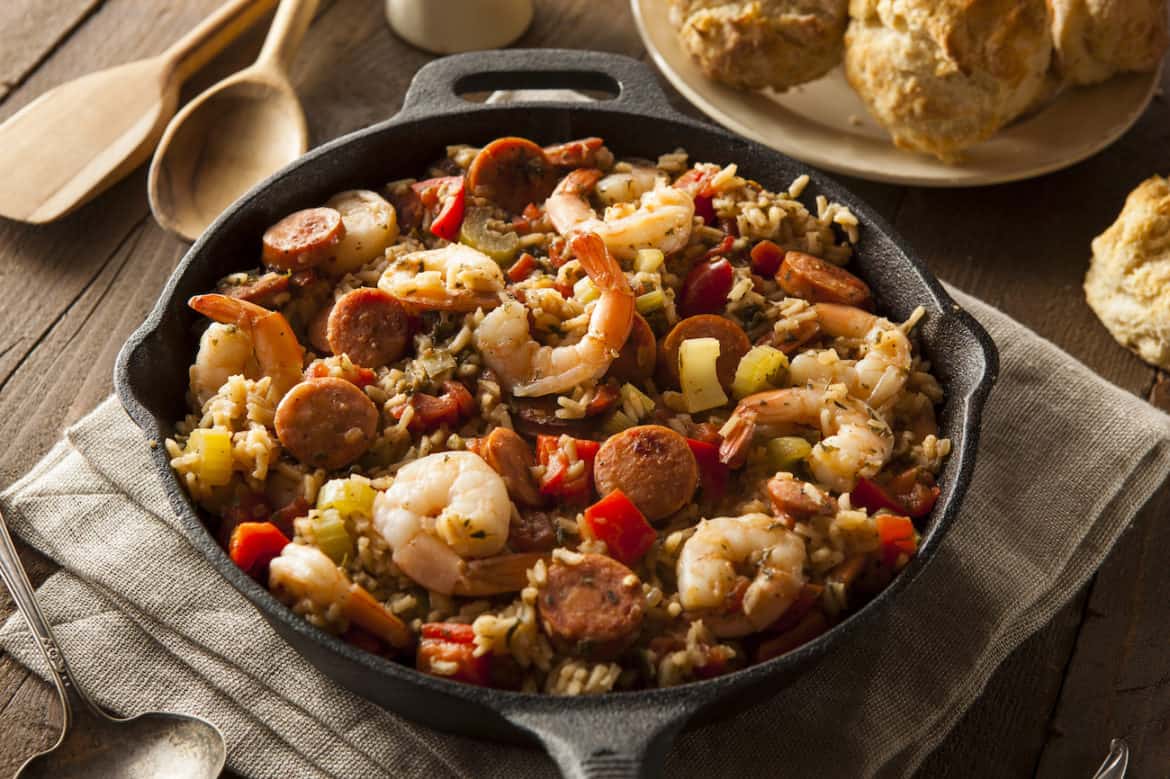 If you are reading this, you might be wondering if Jambalaya can be frozen, and if it can, how exactly to go about freezing it.

Jambalaya is a huge jumble of a bunch of different deliciousness, so it might be a bit unclear as to what the best approach would be to freeze it and save it for someday later in the future.

So, can you freeze jambalaya? In short, yes. However, depending on the exact recipe you followed when preparing your Jambalaya, there might be some nuance to consider before simply covering up your batch and throwing it in the freezer.

In this article, we are going to go over the best approach to take if you plan on freezing jambalaya. To simplify things, I will be going over the freezing process for a classic New Orleans’ creole jambalaya that consists of rice, chicken, andouille sausage, shrimp, tomatoes, onions, celery, bell peppers, creole seasoning, and pepper.

Keep in mind, even if your particular batch of jambalaya has ingredients that slightly differ from the classic jambalaya listed above, the general guidelines and principles for freezing jambalaya will still apply.

In this article, I am going to begin by describing general things to consider when freezing jambalaya. Then, I will walk you through step by step specific instructions for how to go about the freezing process to ensure the jambalaya ends up tasting just right after getting reheated. After that, I will briefly go over the best methods for reheating your frozen jambalaya. Finally, I will end by answering some related questions regarding freezing jambalaya.

Read on to find out exactly how to go about successfully freezing your jambalaya.

While it is absolutely safe to freeze jambalaya and reheat and eat it at another time, the jambalaya will almost always taste better after being prepared fresh than it will after getting reheated from the freezer.

However, if you have prepared too much jambalaya and don’t want it to spoil, freezing it is your best option – who would want to throw it such a delicious meal that takes so much time to prepare?

Since Jambalaya is food that combines a lot of different ingredients, freezing it is not as simple as simply sealing it and placing it in the freezer. While you can do this, there are two main issues that might arise:

In order to address these two issues, there are some precautions that you can take.

Preventing Rice from Getting Mushy

To prevent the rice from your jambalaya turning mushy after getting frozen, there are three things you can do.

Firstly, If you are looking to freeze jambalaya and serve it at a later time, simply cook the jambalaya without ever adding rice. Then, on the day you are ready to serve, bring the frozen jambalaya to a boil in your favorite pot and add rice at that point. At that point, you will have freshly cooked rice which will pose no risk of being mushy.

Secondly, if you are looking to freeze jambalaya and serve it at a later time, but will not have the opportunity to add fresh rice to the jambalaya, simply cook the jambalaya the same way you normally would, but just undercook the rice. Since the rice is undercooked, it won’t be as puffy/have enough moisture inside of it, and thus when it freezes it will not become quite as mushy.

The undercooked rice will then be fully cooked after the reheating process is complete.

Now, if you have already prepared the entire jambalaya meal with rice that has been fully cooked and have leftovers that you need to freeze, then the first two methods don’t help too much.

In this case, the best thing you can do is take your remaining jambalaya and store it in a food saver vacuum-sealed container. Storing the jambalaya in a container that is vacuum-sealed will help prevent moisture from escaping the rice and hence turning the rice into a clumpy, mushy, mess.

Alternatively, another method you can use to ensure the jambalaya being placed in the freezer is as sealed as possible is to place the jambalaya into a ziplock bag, flatten it out as much as possible, and then use a kitchen cooking vacuum machine to suck the air out of the bag.

A benefit of using this method is that you will be able to reheat the jambalaya with the bag directly once you are ready to reheat and eat.

Preventing Shrimp’s Texture from Getting Flabby

Unfortunately, there is really not much you can do to prevent the shrimp’s texture from becoming less-than-preferable after freezing jambalaya.

If you know that you plan on freezing the jambalaya you prepare, consider making a jambalaya recipe that does not include shrimp to avoid this issue.

The good news for you, however, is that as long as you follow the correct freezing and reheating processes described below, the slight change in the shrimp’s texture won’t be enough to ruin the deliciousness of your reheated jambalaya.

Note: For this guide, we are going to assume you have already prepared the full jambalaya meal with rice as well. Keep in mind that adding the rice during the reheating process is always a good option to help avoid the risk of the rice turning mushy.

Step 1: Cook a batch of jambalaya

Step 3: Once the jambalaya has cooled down, break it up into ~~2 cup portions and place these portions into a freezer-friendly container, flattening out the food into a thin layer in each bag.

Note: You can place your jambalaya into ziplock bags or airtight Tupperware containers, however using a vacuum sealer will be the most effective way to store your jambalaya, as this would eliminate any possible loss of moisture from the jambalaya.

Step 4: Place your sealed jambalaya into the freezer.

For reheating frozen jambalaya, you have three options to choose from: use the microwave, use the stovetop, or use the oven.

Note: If your jambalaya recipe includes shrimp, keep in mind that the shrimp might be hard, rubbery, and flabby after the reheating process is complete.

Reheating jambalaya in the microwave is the fastest and easiest way to reheat it, however, it also promises the least predictable results. This is due to the natural tendency of microwaves to heat food unevenly.

To reheat jambalaya using the microwave, simply allow the jambalaya to thaw in the fridge for 24 hours, place it into a microwave-safe container, cover it a damp paper towel, and place it in the microwave with a glass of water to help prevent it from drying out.

Microwave the jambalaya in 30-second increments, stirring after each increment until it comes out steaming hot.

For reheating jambalaya using the stovetop, you have two options:

Firstly, you can place the frozen jambalaya straight onto a skillet with a few tablespoons of water on low heat and let it heat, stirring occasionally.

Alternatively, you can place the bag with the frozen jambalaya inside of it into a pot of boiling water and allow it to heat up that way.

Both of these methods are known to be quite effective. Generally, by using a skillet, you are able to get more creative by adding additional sauces or seasonings but it will take a bit longer while placing it into a pot of boiling water is simple and will heat the jambalaya quickly.

If you would prefer to reheat jambalaya using the oven, keep in mind that this method will take the longest amount of tie and also creates the risk of the jambalaya drying out.

Once you’re ready to reheat it, preheat your oven to 300 degrees Fahrenheit, place it in an oven-safe tray or dish and cover it with aluminum foil, and heat for 20-30 minutes, depending on whether it was fully frozen or not going in.

Can you refreeze jambalaya after reheating it?

Yes, you can re-freeze jambalaya as many times as you like, just be sure to follow the entirety of the freezing process outlined above.

How long can I keep jambalaya in the fridge for before it goes bad?

It is safe to reheat and eat jambalaya that has been in the fridge for 4 days or less. After that, you run the risk of getting food poisoning.

Can You Freeze Rice and Beans?