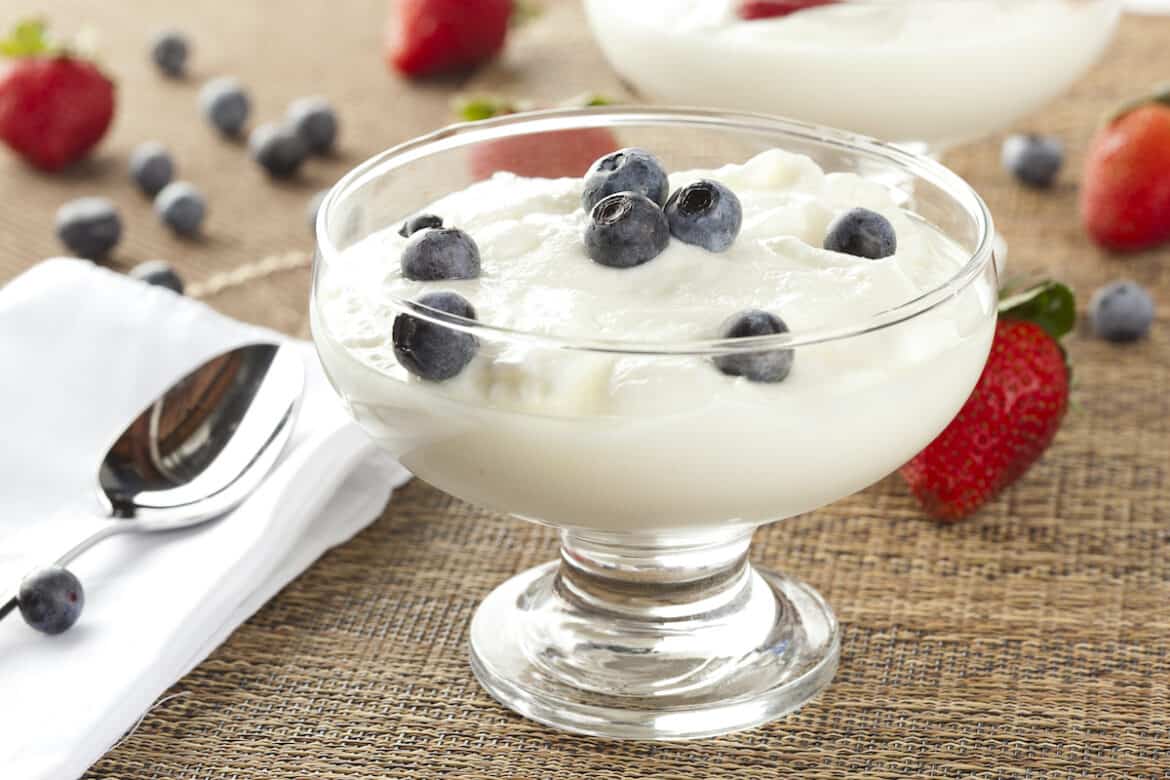 Breakfast forms a crucial part of our day. Eating ready-to-eat meals or simply cornflakes may fill you up for some time, but it’s not the healthiest option.

So, what else can you eat to have a healthy breakfast that will keep you full during the day? The simplest option is yogurt, but more specifically, Greek yogurt!

There are multiple ways of using Greek yogurt in your meals. For instance, you can either eat it alongside some salad or even incorporate it into your smoothie. But how can you store it for long-term use?

We’ll talk about the best ways to freeze Greek yogurt to keep it fresh in this guide! Read below to find out more.

What Is Greek Yogurt?

So, what makes Greek yogurt different from other regular yogurts, and why is it so popular?

You may have bought Greek yogurt, thinking it’s the same as regular yogurt. But once you’ve opened it, you’ll see that it is nothing like your regular yogurt.

Greek yogurt has its origin in Greece. Kostas Mastoras is known to be the first to make and sell Greek Yogurt in the United States over 20 years ago.

Greek yogurt is different from regular yogurt because of its texture. It is thicker and creamier in texture due to the method used to make it.

Just like other yogurts, Greek yogurt has a similar composition to milk and is fermented. But to make Greek yogurt, the whey is strained after fermentation, giving the yogurt a solid and velvety texture!

Apart from this, people also strain Greek yogurt, unlike other yogurts.

Besides the difference in its making, it’s high-protein and contains other nutrients such as zinc, calcium, etc. It provides other multiple health benefits such as boosting metabolism, increasing bone strength, and more.

Is It Possible To Freeze Greek Yogurt?

If you want Greek yogurt to last longer, you can definitely freeze it.

Freezing Greek yogurt is okay as long as you consume it before 3 months. When Greek yogurt is frozen, it may lose its consistency and may turn out to be grainy. However, you can avoid this in multiple ways, which we’ll discuss later.

After thawing, you can incorporate frozen Greek yogurt in a variety of dishes, or our personal favorite, smoothies!

Freezing Greek yogurt does not cause it to lose its health benefits. Once you’ve thawed the frozen yogurt, it is still just as healthy as before.

A problem with frozen yogurt is the possibility of freezer burn. Freezer burn occurs when the moisture from the yogurt evaporates. You’ll notice this when the yogurt is completely frozen, and there is ice formed on the top.

Whenever this happens, you may not want to consume Greek yogurt, as it would taste extremely bland. However, if you don’t care much about the taste, you can still consume it safely.

How Long Can You Freeze Greek Yogurt?

Usually, frozen yogurt lasts for about 2 months. However, if you want to store opened Greek yogurt by refrigerating it, it will last for only 2-3 weeks.

What Happens When You Freeze Greek Yogurt?

Yogurt is made by heating milk on a low flame; this allows it to take a solid form.

But when you freeze the yogurt, the structure collapses and causes the yogurt to become grainy. Well, this is a bit of a disappointment for people who like their yogurt creamy and smooth!

The texture of the yogurt will turn grainy. This, however, depends on the brand that you choose.

Refrigerating Greek yogurt makes it slightly acidic. You will notice that the taste is somewhat on the sweeter side. However, the taste won’t change much.

If you want to keep the original taste, then there’s a trick for that too. You just need to mix or blend the yogurt liquid to restore it to its original flavor.

Once refrigerated, the Greek yogurt loses its thick texture. This happens when you freeze the yogurt and later defrost it.

The consistency in the yogurt changes because of the separation of the fat and water. This makes the yogurt thinner and watery. To get a thicker texture, you can mix or blend it all together.

If you’re still planning to freeze Greek yogurt, here are some of the methods you can use.

1. Use An Airtight Container

The simplest method of refrigerating Greek yogurt is by using an air-tight container. Make sure the container is properly sealed so that it does not come in contact with air.

If you allow the Greek yogurt to come in contact with air, this will speed up the bacterial growth, which will absorb the flavor and affect its taste.

It may seem like a bad option, but it works well when you want to store the Greek yogurt for more than a month.

Follow the steps below to freeze the yogurt using a tray:

This is the best way to freeze Greek yogurt if you want to incorporate it into your smoothie. All you have to do is transfer the portion of yogurt into the ice cube tray.

Let it freeze for a few hours, and once frozen, you can directly add it to your smoothie or transfer it to a freezer-safe bag!

However, it’s best to cover the ice cube tray with saran wrap or even transfer the cubes to a freezer-safe airtight container to make sure they last longer and don’t get freezer burn.

If you have unopened Greek yogurt, you don’t have to worry about transferring it. Just place the container as-is in the freezer.

If you have opened the yogurt, make sure you transfer it into another container and make sure it’s completely sealed.

You can make your own homemade popsicles using Greek yogurt. All you have to do is pour the yogurt into small plastic cups and freeze it for around 4 hours.

This is a traditional method that is used to make and store yogurt. Clay pots have small pores on their surface that allow moisture, which in turn keeps the pot cool.

This allows the yogurt to get a cool temperature, which is needed for storage.

You can add yogurt to the clay pot and allow it to freeze for a few days. This will not only help you store Greek yogurt but will also help retain favor.

If you read the instructions given on the container of the Greek yogurt, it says, “Do not freeze.” This is because once you freeze the yogurt, it loses its structure.

However, if still want to, there are ways that will ensure that your Greek yogurt tastes just the same even if it’s frozen.

Make sure you follow the tips below to retain the flavor and texture of the Greek Yogurt.

Note: Once the Greek yogurt is thawed, you cannot refreeze it again. Refreezing thawed Greek yogurt allows bacteria to grow, making it harmful for consumption.

How Do You Store Greek Yogurt?

Apart from freezing, if you want to keep your Greek yogurt fresh, then there are more tips to follow for the best results. These include:

How Do You Tell If Greek Yogurt Has Gone Bad?

Given below are a few signs to check:

Even though freezing yogurt comes at a cost, it is worth considering the option for future use.

By freezing, you are keeping the yogurt available for multiple recipes and increasing its shelf life. And it’s always nice to have some extra when you’re feeling too tired to run errands!

There may be certain disadvantages to freezing Greek yogurt, such as losing its texture or its flavor. However, there are ways in which you can retain and restore the flavor that we’ve mentioned above!

Now that you know about Greek yogurt and the multiple ways by which you can freeze it, go ahead and try it in your own favorite recipes and smoothies.

Up Next: The Best Substitutes For Greek Yogurt In Baking

How To Cook Pizza Rolls In An Air Fryer