Can You Let Bread Rise 3 Times? 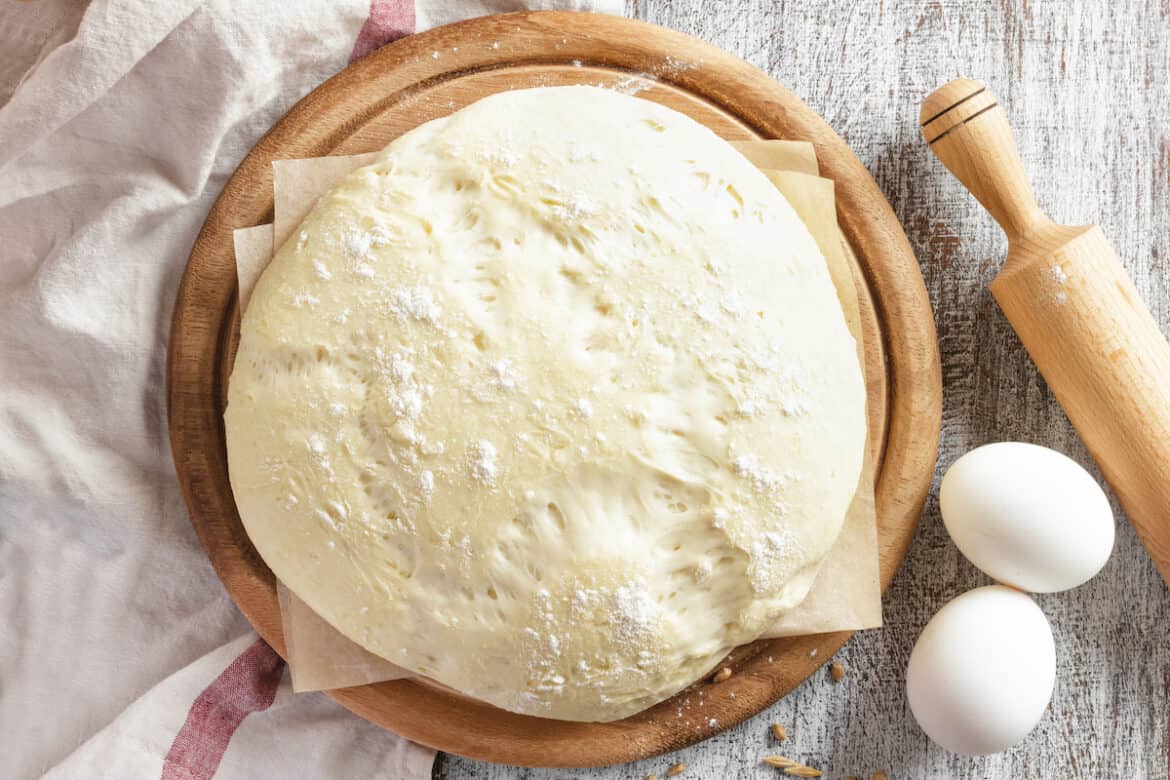 Whether this is your first time making bread or you’re a regular bread baker, you probably know that most modern recipes call for letting your dough rise twice.

If two rises are conventional, will three rises put your loaf of bread in the ranks of the best?

Can you let bread rise three times? Yes, you can let bread rise 3-4 times, but it’s generally unnecessary and won’t yield any better results unless you’re knocking it back for a specific reason. You can even let your bread rise overnight in the fridge.

In this article, we’ll explain why dough needs to rise twice and what can happen if you exceed these recommendations.

Most modern yeast bread goes through an initial rise, which is called bulk fermentation, and a final proofing, or second rise.

The combination of these two allows the gluten proteins in your dough to stretch sufficiently to protect the air bubbles created by your activated yeast.

This not only allows your dough to expand and grow, but it keeps it light, fluffy, and airy with a crisp, stable crust.

After all, no one likes a hard crust!

How Many Times Can Dough Rise?

Depending on the technique used, dough can rise many times before it truly starts to damage the texture, size, or flavor of your loaf. However, just because it can rise up to 10 times doesn’t mean you should try to master this technique.

Modern yeast works perfectly well when bread is given two rises. More than that won’t improve the bread and is essentially a waste of your time and energy unless there is a specific reason for allowing it to rise a third time.

Why Does Bread Need to Rise Twice?

For bread dough to develop height and the light, airy texture with a crisp crust that you desire, it must rise. More specifically, the yeast must be activated.

Bulk fermentation is generally considered the first rise. At this stage, the yeast begins to consume the sugars in the dough, releasing carbon dioxide gas as it eats.

That gas is what causes the dough to grow, or rise. The gluten proteins in the dough are stretched and prepared to support the structure of the bread.

During the second rise, often called proofing, the gluten protects the air bubbles from the carbon dioxide gas as the dough expands, allowing for an airy consistency that can hold its shape without collapsing.

Both under-proofing and over-proofing will result in bread that doesn’t maintain its structure through the baking process. Underproofed dough doesn’t develop the gluten proteins enough to give your bread the strength it needs.

Overproofed dough is stretched too far, breaking down the gluten proteins so that they also don’t have the strength to hold the rise effectively.

What Happens If You Let Bread Rise 3 Times?

Even though the most common practice in bread making is to allow for a single bulk fermentation and single proof to get the optimal rise out of your dough, you may be wondering what happens if you let bread rise 3 times.

Does it get better or worse?

A third rise is not magical in itself. It’s possible to let bread rise 5 or even 10 times and still develop a beautiful loaf of bread. The more important question is how long you allow your dough to rise each time.

If you notice that your dough overproofs on the second rise, you can save the bread by knocking it down and allowing it to rise a third time, more carefully supervised.

You also want to be sure your yeast has enough food to keep from turning your dough sour. If you’re stretching and folding your dough multiple times, allowing for only partial rises, you can safely let your bread rise 5 times without concern.

However, allowing your dough to double in size more than twice can compromise both the flavor and the texture.

As you can see, it’s not how many rises you allow your dough, but how much your dough rises each time.

How Long Does It Take Bread to Rise?

Many factors affect the rising of your dough and make it nearly impossible to provide an exact answer to how long it takes bread to rise.

When you’re mixing your dough, the temperature of the water used can speed up or slow down the initial activation of the yeast, affecting the time it takes the dough to rise.

The temperature of the environment your dough is rising in, as well as the humidity, can greatly affect how quickly the yeast feeds, expanding your dough.

In a warm kitchen or proofing oven, your dough may only take 1 hour to rise. Some bread bakers choose to allow their bread to rise more slowly, overnight in a fridge.

In most cases, the first rise or bulk fermentation time is usually 2-3 hours at a comfortable room temperature. Folding and shaping will happen within this time as well, depending on the type and style of bread you’re baking.

How Long Should Bread Rise the Second Time?

For the final proofing, or second rise, transfer your dough to the baking pan and allow it to rise in place. The second rise will, once again, roughly double the size of your dough, however, it will also continue to rise in the oven.

The type of dough and, of course, the environment will affect the final proofing time.

Moist dough in a warm kitchen may be ready to bake in 1 hour or even less. A more dense dough or a cool kitchen may require 2 or more hours for the second rise.

How to Tell if Dough Has Risen Enough

If you’re using a tried and true recipe, the best advice we can give you is to follow the directions as closely as possible, letting your dough rise only as long as the recipe calls for, at the correct temperature.

If you’re experimenting, a good technique to put to use is the press test. Press your fingers into the dough slightly. If the dough quickly fills back in, it needs a bit more time to rise. If the space stays depressed, it is ready to bake.

Another good rule of thumb to follow is to allow your dough to approximately double in size. This is less exact because some dough recipes will rise more, others less.

It can also be difficult to judge how much dough has expanded, but it is somewhat of a good indicator.

Can You Let Bread Rise Too Much?

During bulk fermentation, the question is, more specifically, whether or not you can proof yeast too long.

If you allow the dough to proof for too long, the yeast will eventually eat all the available sugar and your dough will start to ferment to the point where it develops a sour flavor.

While this may be ideal in sourdough bread, it should be a strategy, not a mistake of over-proofing.

If you allow your bread to rise too much it can also affect the texture. It will be more dense and chewy, tending towards being crumbly once cooked.

If you allow your bread to rise too long during the second, or any subsequent rise, it can start to break the gluten proteins, compromising the structure of your bread.

Even though it starts taller, over-proofed bread dough will collapse and generally turn out up to 20% smaller than perfectly proofed dough.

Can You Let Bread Rise Overnight?

You can let your bread rise in the fridge overnight. The cooler temperatures will slow down the yeast, protecting your dough from over-proofing.

Before you bake your bread, however, you’ll want to bring it back up to room temperature. You may even want to give it some extra time to finish rising, if necessary.

Is There an Ideal Bread Proofing Temperature?

For the first proof, during the bulk fermentation, the ideal temperature will be between 50°F–75°F.

You want to protect your dough from getting too warm during fermentation so that it doesn’t expand too much or too quickly. You have to protect the gluten structure at this stage.

For the second rise, you want to be sure your dough has plenty of room to expand and is kept warm and moist. The ideal temperature will be between 70°F-115°F.

You can purchase proofing baskets and bowls designed specifically for proofing bread, or even a specialized bread maker with a proofing mode.

How to Make Bread Rise Faster

If you want your dough to rise faster, the most common and easiest solution is to increase the heat surrounding your dough. Warmer temperatures will activate your yeast more.

When you’re making dough, you can start by activating dry yeast with warm water, though make sure it’s not above 125°F. You can also add a touch of sugar to the water to feed the yeast.

For completed dough, you can warm it in the microwave very briefly for a maximum of 20 seconds at a time. Use this technique sparingly so you don’t risk cooking your dough, which can happen if it is heated to 250°F or more.

Most bakers simply cover their bread bowl as it’s rising to trap the heat and moisture inside the bowl, encouraging it to rise more quickly.

Can You Overproof Pizza Dough?

Yes, as with conventional bread dough, it is possible to overproof pizza dough.

While proofing pizza dough may have a longer window, if your dough proofs for more than 3 days, the yeast will essentially starve and start fermenting your dough.

Over-proofing pizza dough also results in a flat, dense crust because the gluten relaxes too much, breaking down the internal structure. Most professional pizza makers will proof their dough for a maximum of 24–48 hours.

Up Next: Can I Use Sourdough Starter Straight From The Fridge?

33 Fruits That Start With B

Can You Reuse Oil After Frying Chicken?