Home Cooking Tips Bread Crust Too Hard – Can You Soften It?
Cooking TipsFoodsguy

Bread Crust Too Hard – Can You Soften It? 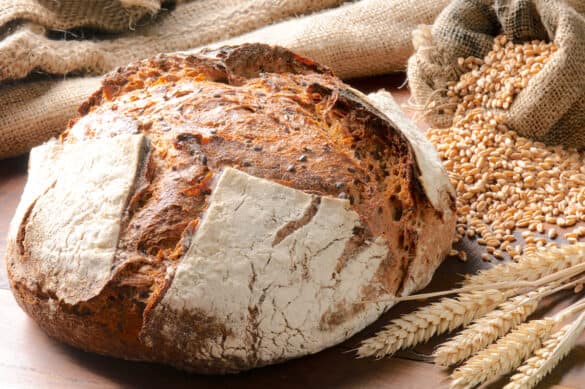 Bread is a staple food that’s consumed all around the world. Many people have decided to start making their own bread at home.

But making bread requires a little bit of skill and experience. Otherwise, you can end up with bread that’s far too hard to bite into.

Can you soften bread crust that is too hard? To prevent hard bread, make sure your dough is moist and soft, don’t over or under-knead it, and don’t let it rise in the fridge for more than an hour. To fix hard bread, you can steam it or place a wet towel over it after you pull it from the oven.

If you’re one of those people who struggle with accidentally baking hard crust, keep on reading and we will point out some common mistakes and how you can correct them in the future.

The common mistakes you can make when you are making bread that can result in hard crust are as follows.

But keep in mind, if you take the bread out of the oven too soon, the middle part may remain unbaked. You will have to find the right balance for your particular recipe.

Alternatively, you can use a bread maker that is specifically made to bake bread perfectly.

The question of time doesn’t only come down to the issue of baking the bread for too long, but also to the rising time.

The longer the dough rises, the harder the crust will be. On the other hand, if you are a fan of using the refrigerator to rise the bread, don’t let it rise for more than one hour.

And if you don’t refrigerate your bread dough, you should consider it.

If you are working with the bread dough before baking, you may encounter the issue of over-kneading or under-kneading. Usually, when you knead the dough by hand, the problem is under-kneading.

On the other hand, over-kneading can occur when you use kneading machines. But there is one thing you can do when it comes to bread dough kneading issues – the windowpane test.

The test is simple. Cut off a small piece of dough, hold it between your thumbs and index fingers, and slowly spread the dough between the fingers until the dough becomes translucent. If it doesn’t break, the dough is ready to rise.

If the dough breaks, you need to knead it some more, for a couple of minutes, and then you can do the test again.

Others use the sticky test, which basically means that when the dough stops sticking to your hand when you knead it, you have kneaded it right.

Type of flour is also very important when it comes to bread making. People often use the wrong type of flour, which leads to the harder crust.

So, people often play it safe and use all-purpose flour thinking that way they can’t make a mistake. But, in reality, you should only use bread flour to make bread. That way you can avoid rock-hard crust.

5. Forgetting to Knock Down the Dough

If you haven’t heard of this term before, then you’ve probably made this mistake before. Knocking down (or degassing) bread dough is essential.

Bread dough rises because of yeast, an active ingredient that releases little carbon dioxide bubbles into the dough.

If you don’t let that air out properly, you will end up with bread that has large air pockets instead of small bubbles and crust that is too tough.

Some bread types have a crunchy, harder crust (for example, French baguettes) and some have a softer outer layer that isn’t really much of a crust at all.

If you use a dough that typically produces a harder crust and also combine it with one of the other mistakes on this list, you’ll end up with a jawbreaker instead of a lovely loaf of soft bread.

How to Make Softer Bread?

Okay, so we’ve covered the mistakes, but what are the solutions? There are a few ways to prevent hardening in the first place, as well as a few ways to save bread that is too hard once it’s already been pulled from the oven.

As we mentioned above, there are types of bread that are supposed to result in a thick and hard crust, so keep in mind that you should avoid recipes for these types of bread if you’re looking for a super soft outer layer.

Generally, types of bread that have soft crust are those that have added fat in their recipes. Bread types that have a higher fat content include brioche, ciabatta, zucchini or banana bread, and sandwich buns.

You can also try out our recipe for mayonnaise bread. We know it sounds a little strange, but the mayo keeps it moist, soft, and fluffy, including the crust!

Therefore, adding any kind of fat will help – whether it is olive oil, sunflower oil, butter, or any kind of oil, these fats add moisture. However, be careful not to add so much oil that your bread comes out soggy or oily.

2. Create a Soft and Moist Dough

If your dough is hard and dry when you knead it, guess what? Your bread crust won’t turn out any different. Make sure your dough is soft and has enough moisture to bake properly.

Adding oil and enough amount of water will help you soften the bread crust. When you are kneading the dough by hand, keep in mind to add the fat as the last ingredient.

With that said, there is also such a thing as too much moisture. Your dough should be soft and stretchy and shouldn’t stick to your hands or break easily when stretched.

It shouldn’t feel wet or super sticky once the oil has been kneaded in.

One of the most common mistakes bread makers face is that the temperature has been set too high. High temperatures will result in a quick hardening, charring, or even burning.

Most of the recipes for bread require a moderately hot oven, around 350-375°F. So, make sure you double-check the recipe and follow it by-the-book. Those rules are only there to help you.

If your oven is a bit old, it might be that your thermostat needs to be adjusted. If you can’t get someone to fix your oven, you can always rely on an oven thermometer instead.

4. Check Your Dough in the Oven

The first thing you should do is to set the timer right, according to your recipe. If you are using an oven without the timer, use something like a stopwatch or cell phone timer to get the best outcome.

But when you put the bread in the oven, it doesn’t mean that you should just forget about it.

You have to constantly check the state of your bread if you want it to turn out perfect. This is really important towards the end of the baking process.

If the bread bakes for too long, it will have a hard crust. So, you have to check out the color of the bread. Perfect bread will have a brown and golden color.

You can use steam to soften bread while you bake it in the oven. Some ovens have a steamingg option which is helpful as soon as you place your bread in the oven. Turn it on for about 10 minutes.

But if you don’t have this fancy option, don’t worry. You can use a tray for this trick.

Just boil some water and pour it into the tray, put the tray in the oven, and place the pan with the dough next to it. The water in the tray will create steam that will soften your crust.

6. Try Other Tricks for Softening Crust

There are few additional tricks that can help you soften the crust of your bread.

After you take the bread out of the oven, just take a dump towel or cloth and place it over the bread. The crust will absorb the moisture and become softer. Only do this while your bread is still hot.

When you take the hot bread out of the oven, you can place it into a plastic bag until it cools and the bread will retain its own moisture.

Use a Lighter Color Pan

This might sound weird to you, but dark pans can absorb more heat than lighter ones and that transfers to the bread.

So, give a light, shiny, aluminum pan a try. But if all you have is a dark pan or the pan made of glass, which also transfers more heat, try lowering the temperature by 20-25°F.

If your bread crust is soft in some places and hard in others, you may want to try using a bread baking stone. These stones help you achieve a perfectly even crust.

Up Next: 5 Best Bread Proofing Baskets

Can You Drink Evaporated Milk?