Can You Boil Almond Milk? 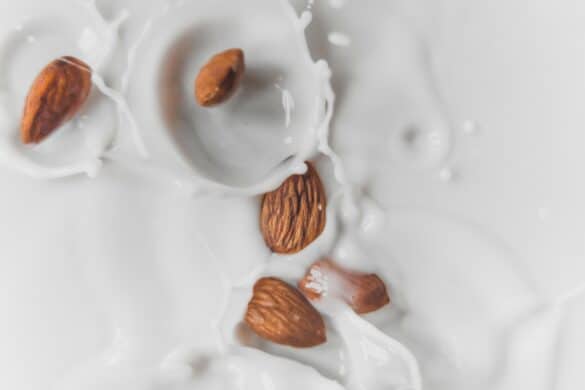 Almond milk has been growing in popularity over the past couple of years and is highly regarded for its nutrition and flavor. It can be mixed with lots of ingredients to make incredibly tasty hot or cold drinks.

For example, making a chilled glass of iced coffee with almond milk seems easy enough but how does one go about warming up a glass of this stuff?

Can you boil almond milk? No. You shouldn’t boil almond milk because it will “burn” it and give it a bitter and burnt flavor. Almond milk isn’t like cow milk, rather it is a mixture of blended almonds or pulp that can easily burn when enough heat is applied. However, there are a few ways you can warm it up.

Read on below to learn more about almond milk, how to make it at home, and the best ways to heat store-bought or homemade almond milk!

What Is Almond Milk?

Almond milk is hailed as a “wonder ingredient” by many health experts due to its benefits and advantages over regular milk.

It is important to note, however, that almond milk isn’t exactly milk—it’s plant-based milk! It’s just called that because of its visual similarities to cow milk.

Almond milk contains almond pulp which is a mixture of blended almond and purified water.

Historically, almond milk has been consumed by humans for centuries. It was extremely popular in the medieval era and many believe it was also invented during that time.

Its use was so widespread back then that it was listed as an ingredient in almost every medieval European cookbook.

Its use and popularity continue to grow even today!

Additionally, almond milk is sometimes preferred over cow milk because it fits the dietary needs of many people. For one, it is free of lactose which means almost everyone can consume it without bowel troubles.

The other reason is that it can be mixed in several ways and paired with several ingredients to make delicious beverages.

Many recipes incorporate almond milk, ranging from Macha drinks, fruit-based drinks to even coffees and more. Similarly, almond milk can replace regular milk in recipes and may add a lot of value in terms of flavor too.

However, when it comes to hot drinks, you may need to treat almond milk a bit differently.

Can You Boil Almond Milk?

While boiling cow milk is a norm and is seen as a necessary step to purify the mixture, you can’t just boil almond milk the same way.

Boiling almond milk will result in a bitter flavor and will also drastically change the color of the mixture. Why? This happens because almond milk contains pulp that is more sensitive to temperature changes than milk solids.

How To “Boil” Almond Milk

So how does one boil almond milk? The easiest way to go about this would be to use a thermometer. The trick here is to stay under 212°F because that is when the liquid will start to boil.

In other words, the best way to avoid any textural or flavor changes in almond milk would be to avoid a rolling boil.

Some people may ask how the milk would remain bacteria-free if you don’t boil it. The answer is quite simple: most bacteria die at temperatures around 158°F.

It is noteworthy that the chances of consuming bacteria-laden almond milk in the first place are generally low.

However, for peace of mind and for people who want to make almond milk at home (more on this below), you can bring the milk to almost a light simmer using a thermometer.

The goal is to slowly heat the almond milk using low heat until it reaches 158°F.

You may maintain the temperature of the milk at 158°F for 3-5 minutes which should be more than enough to get rid of all pesky germs.

Once the milk is heated, turn the heat off and allow the liquid to reach room temperature. Or you may also use it while it is hot to make coffee or other hot beverages.

Keep in mind that there are several varieties of almond milk in the market and each brand has a different approach when it comes to its product.

For example, some brands may use additional thickeners, flavoring agents, and more to change the look and consistency of the milk and this may even affect how it heats too.

This is why we recommend that you experiment with different brands until you find the one that best fits your needs.

With that said, you can also make almond milk at home using household ingredients in just a few minutes…sort of. Let us explain below.

How To Make Almond Milk At Home

Making almond milk at home is easy but requires patience.

From start to finish it can take about 12-18 hours until the milk is ready but here’s the thing: the process of turning almonds into milk only takes about 5 minutes!

The bulk of the time is taken up in preparation because the almonds need to be soaked in water for at least 12 hours before “milking” them.

Here’s a great go-to recipe for making almond milk at home – For this recipe, you will need:

How To Store Almond Milk

Home-made almond milk can be bottled and refrigerated at 40°F for about 4 days. Please make sure that you place the milk in an air-tight bottle and consume it within 4 days.

The best place to store the milk in the fridge would be away from the door so that it isn’t exposed to temperature differences.

As discussed, heating refrigerated almond milk can be a bit tricky but becomes easy once you get used to it. Always use a thermometer to keep an eye on the temperature and never leave almond milk unattended over the stove!

Additionally, you can also microwave cold almond milk as long as you follow the same conditions mentioned above. Remember, stay at 158°F or below for the best tasting almond milk!

Now that you know what almond milk is, how it’s made, and how you can boil it without changing its flavor, here are a couple of related questions we thought you might have!

Can you mix almond and cow milk?

Yes, you can mix cow milk and almond milk but the purpose needs to be clear.

While mixing both of them may be redundant, if you are trying to invent a new beverage or if you want to change the flavor of a recipe by using both types of milk then you can experiment with different ratios.

However, we wouldn’t recommend mixing both for general health benefits as enriched almond milk can come very close to the nutritional profile of cow milk, and drinking a concoction of both may be taxing for your stomach.

Can you increase the boiling point of almond milk?

Commercial-grade almond milk may contain certain chemicals and stabilizers that may help the mixture act or heat like regular milk but when it comes to homemade almond milk, you will have to avoid boiling it.

Always check the back of the packaging to learn more about how to use commercial almond milk for the best results.

Can you milk lightly roasted almonds?

Yes, you can make almond milk from lightly roasted almonds but this will require some attention to detail as all the almonds must be equally roasted to maintain a pleasant flavor when you blend them.

Even a few burnt almonds may negatively affect the flavor of the almond milk.