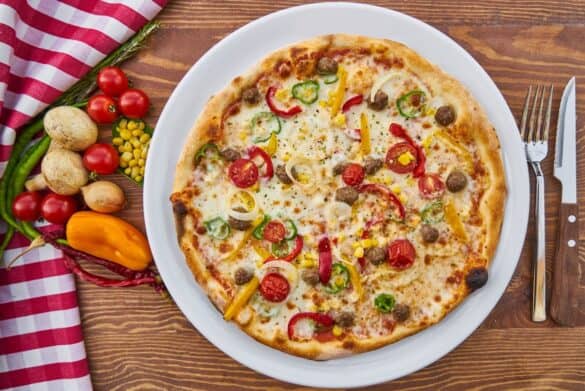 Just because you’re vegan doesn’t mean that you have to miss out on one of the world’s favorite foods…pizza! There’s no reason that pizza can’t be vegan, due to the fact that pizza dough and pizza sauce are not made with animal products.

If you find a way around the cheese (and believe me, there are plenty of excellent vegan cheeses out there), you can easily enjoy a delicious, vegan pizza.

Below are our favorite vegan pizza toppings. From specialty vegan products to basic produce, there is something for everyone. We hope this list inspires your next vegan pizza night!

Perhaps the best (and most important) vegan pizza topping out there is vegan cheese.

Violife makes a delicious, pre-shredded vegan cheese that tastes so much like mozzarella that you’ll forget it’s vegan! You can find it here.

The small shreds melt quickly and easily, an essential characteristic in a vegan cheese when using it as a pizza topping.

Additionally, it is sold in bulk, so you’ll always have this vegan mozzarella on hand for when a pizza craving hits. You can even freeze it, so no need to fret about being unable to use it all up quickly.

Though it is certainly more work than just sprinkling some pre-shredded cheese onto your sauce, it will allow you to make a vegan pizza (cheese included) fully from scratch.

This dairy-free mozzarella cheese can be made in just 30 minutes.

When you’re done, you’ll be left with a beautiful mozzarella wheel that can be sliced and spread out on a Margherita pizza or shredded to compliment any style of vegan pizza that you can imagine.

For many pizza lovers, their pie isn’t complete without pepperoni, and thanks to Louisville Vegan Jerky, even a vegan pizza can have a delicious pepperoni topping!

Their pepperoni bits have a realistic flavor made from textured soy protein and tamari. You can find them here.

Though they don’t come in the typical pepperoni slice form, you won’t miss traditional pepperoni thanks to the flavor that these little bits pack.

In fact, their small shape ensures that your pepperoni is evenly spread over your pizza. Maybe traditional pepperoni should take note!

Another favorite pizza topping of many meat-eaters, bacon is clearly not vegan friendly.

However, thanks to Badia’s imitation bacon bits, you can make a plant-based Hawaiian or BBQ pizza in a flash. You can check the price here.

These imitation bacon bits have a surprisingly realistic flavor, and you’ll forget that you’re not eating real bacon.

Consider experimenting with a variety of bacon-based vegan pizza recipes, such as a BLT pizza or a spinach and bacon pie.

If you’ve never had sun-dried tomatoes on a pizza, now is the time to try. Our favorite brand is Bella Sun Luci, which you can find here.

They are oil-packed and flavored with plenty of seasoning, adding serious depth to your pizza. You could even incorporate them into your vegan tomato sauce, especially when utilizing a julienne cut tomato.

Sun-dried tomatoes, though somewhat unconventional, are a delicious pizza topping that you won’t regret trying.

Consider pairing with arugula or black olives for a healthy, delicious vegan pizza.

The roasting process brings out the sweetness in the peppers, contributing a unique flavor as a pizza topping.

For another non-traditional vegan pizza, pair with spinach and a spicy tomato sauce. And don’t forget the vegan mozzarella!

A favorite pizza topping of many vegans and meat-eaters alike, black olives add a salty kick to any pizza.

Our favorite olives are Pearls Olives. They are an easy pizza topping because they are pre-sliced, meaning you’ll just have to drain them and scatter to create a delicious pie.

Many non-vegans enjoy anchovies on their pizza, and if you’re looking for a salty, flavorful replacement for this fish product, black olives are a perfect choice.

Artichoke hearts are a delicious addition to any vegan pizza.

Our favorite is Kirkland Signature’s Marinated Artichoke Hearts, which you can find here if you’re not a Costco member. They are marinated in olive oil, which helps to preserve and amplify their flavor.

Consider pairing with cherry tomatoes and basil or trying out a vegan spinach artichoke pizza!

Basil is an essential element to so many pizzas, from traditional Margherita to vegan pesto pizza.

If you don’t have a basil plant at home, no need to fret! You can order this fresh basil online, so no need to use dried, less-flavorful basil flakes.

Mushrooms are certainly a favorite vegan option, as they add a meat-like texture to dishes and offer high levels of plant protein.

And as a pizza topping, they are no exception!

Mushrooms are extremely versatile and delicious, and you’ll be able to make a wide variety of pizza topping combinations with this one staple ingredient.

Caramelize them to add sweetness and a silky texture to your pizza, or pair with spinach and garlic to create a healthy and delicious vegan pizza topping combination.

Another traditional pizza topping, red onion adds just the right amount of bite to your pie. They are usually served thinly sliced and raw, but you can even caramelize them and add sauteed spinach or olive tapenade for a truly gourmet vegan pizza.

Though they’re not officially pizza toppings, oregano and red pepper flakes are essential pizza elements for many people. They add serious flavor and are a great way to complete your favorite vegan pizza toppings.

You can check the current price here.

This high-quality oregano is a great way to top off your vegan pizza. It comes from Italy, and the flavors of the region will certainly pair well with any pizza.

It has an intense flavor and aroma, so a little will definitely go a long way.

You can find McCormick Crushed Red Pepper at most grocery stores or you can buy it here.

If you like a lot of spice, consider adding to your sauce in addition to sprinkling on top of your pizza.

How do you make a vegan pizza from scratch?

If you want to make a vegan pizza entirely from scratch, you’ll have to start with the dough! This is a lot easier than it sounds, as pizza dough is vegan in nature.

Once your dough is on the way, it’s onto the sauce!

You’ll have to use a combination of fresh tomatoes (or canned crushed tomatoes) and tomato paste in order to achieve the thick texture that characterizes pizza sauce.

Finally, you’ll need to add vegan cheese! If you want your pizza to be made completely from scratch, the Urban Cheesecraft Vegan Mozzarella Kit is perfect for you.

This homemade vegan cheese goes from the package to your pizza in less than an hour, so you’ll have a delicious vegan pie on the table in no time!

What is vegan cheese made of?

Many vegan kinds of cheese have such a natural flavor that we forget the fact that they aren’t actually made from animal products!

So how do vegan cheeses achieve their creamy, cheesy flavor without using milk?

Most vegan cheese must be made from fat in order to mimic the high-fat content that real cheese contains.

Violife Vegan Mozzarella, for example, is mainly made with coconut oil, while the Urban Cheesecraft at-home mozzarella kit relies on tapioca flour, agar, and nutritional yeast.

What is vegan meat made of?

And what about vegan meat? The vast majority of vegan meat products rely heavily on soy as their primary ingredient.

Soy helps to add the texture that, for example, imitation pepperoni bits and bacon crumbles require.

Additionally, flavorings are added in order to achieve the meat-like taste that we expect from vegan meat.

Up Next: How To Defrost Beyond Burgers In The Microwave

The Best Food Coloring For Macarons