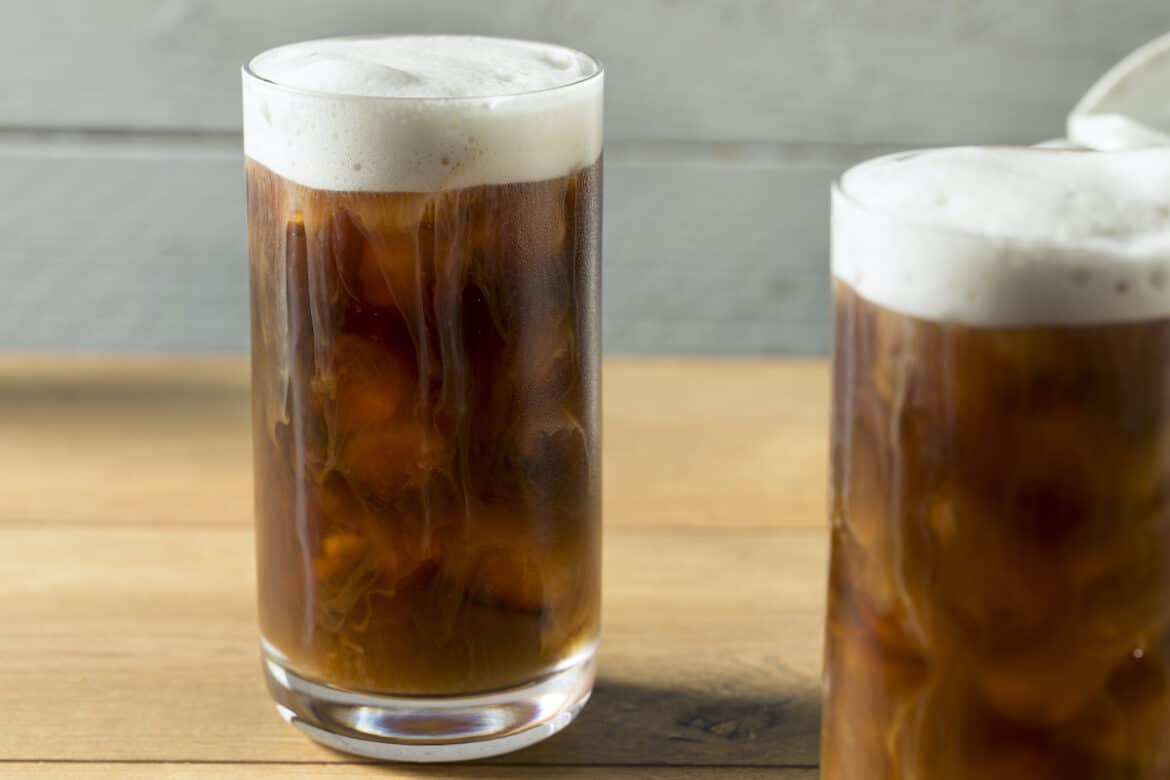 In recent decades, drinking coffee has moved beyond a morning ritual enjoyed by few and become a lifestyle habit, rich with experience and an almost cult-like following.

The days of cowboy coffee are long gone. They’ve been replaced by exotic-sounding craft beverages and cold brews.

Nitro cold brew coffee is one of the most recent trends to revolutionize the coffee industry. Cold-brewed coffee infused with nitrogen gives the coffee drinker a creamy, smooth, heavy coffee experience without any additives.

It’s fully caffeinated and utterly satisfying and can now be accomplished in the comfort of your own home.

Nitro cold brew coffee makers allow you to infuse cold-brewed coffee with nitrogen gas or nitrous oxide, creating a cascading foam that adds a unique depth of experience to your coffee.

You have a choice of either a keg-style coffee maker or a smaller whipper-style unit, both of them compatible with a variety of nitrogen cartridges.

What are the best nitro cold brew coffee makers? The best coffee makers for making nitro cold brew at home are large enough to let you make several cups at once. Keg style makers, which allow you to brew and infuse your coffee with nitrogen in the same place, are ideal for most cold brew drinkers.

What is Nitro Cold Brew?

Nitro cold brew is a type of cold coffee that has been infused with nitrogen gas.

The nitrogen creates a smooth, thick, and creamy mouth-feel, without the necessity of adding cream to your coffee. When the cold coffee is charged with nitrogen is creates a foam, similar to pouring a draft beer.

Since nitrogen doesn’t easily dissolve in water, it creates a thicker than water beverage. The foam dissipates slowly, captivating attention with a cascading effect as the white foam gives way to dark, rich coffee.

Nitrogen is rarely used in the beverage industry, but it can be found in certain dark stout beers. Nitrogen bubbles are smaller than carbon dioxide, so instead of a carbonated soft drink, coffee infused with nitro results in a thick, smooth texture.

Nitro cold brew begins with cold brew coffee and ends with nitrogen infusion, which is primarily what sets these two coffee options apart.

Nitro cold brew is often made using a more concentrated cold brew, brewed even more slowly over a longer period of time or brewed with more coffee.

If a cold brew is too strong, many people will add ice or milk. If nitro is too strong, it is better diluted with water before the nitrogen is added, so as not to compromise the mouthfeel when the drink is prepared.

How to Get Nitro Cold Brew at Home

Nitro cold brew is a very trendy, specialty coffee that is growing in popularity in both luxury and budget-friendly coffee shops across North America.

As more of us are spending time at home, or simply looking to make our own coffee instead of always going out for specialty brews, the appeal of being able to get a nitro cold brew at home increases.

Brewing a beautiful batch of cold brew is the first step, but you will need special machinery to infuse your cold brew with nitrogen.

The remainder of this article is dedicated to helping you choose the best nitro cold brew coffee maker for your unique household demands.

Both styles work well, and though the keg style kit is more popular and easier to find, which one you choose is really a matter of personal preference.

If you’ve done previous research on nitro cold brew coffee makers you may find one thing missing from our list below: whipped cream whippers.

Many people have attempted to create nitro cold brew on a budget at home using a whipped cream canister. While it is possible to create a similar experience to nitro cold brew, it is not the same experience and therefore doesn’t warrant a ranking on our “best” list.

Here are our top choices for nitro cold brew makers:

Let’s take a closer look at each below:

If the lifetime warranty from this brand wasn’t enough to convince you to give it a try, the fact that the machine has a stout creamer faucet with a specially designed pressure release value should.

Why are those features important? Because not only will this coffee maker produce a smooth, creamy cascading foam, but it won’t waste a single drop in the process.

Biggest Drawback: One of the most common complaints about each of these machines is that they take work. It is not as easy to make nitro cold brew at home as it is to order it from your favorite barista.

Cold brewing takes time, learning how to use the machine properly is a skilled art, and there is cleanup involved with every batch. This is true for all the machines on this list and is an important factor to keep in mind.

This is a fully operational, completely integrative system. You don’t just get a nitro infusing machine, you also get filters to make the cold brew to perfection, an insulated keg with a regulator cap, and a cascading pour tap.

There’s even a coffee funnel, serving mat, and protective bag included so you can bring your nitro cold brew coffee maker on road trips or to the office, should you be so inclined.

Biggest Drawback: Another common complaint across models is that the nitro cartridges do not come with the system but need to be purchase separately. Since N2O cartridges are much more common and less expensive, many people have tried using these less effective options and found themselves frustrated with the results. The N2 cartridges are smaller and more expensive, though more effective.

Though this coffee maker doesn’t actually brew the cold brew coffee, it does hold up to 6 glasses that can be kept fresh for extended periods, or up to 3 days after being infused with the nitrogen.

Biggest Drawback: Although this is a great nitro maker, it is not exactly a coffee maker – that is, you’ll have to brew your cold brew separately. But you can pull out a batch at a time and give it some nitro love in this keg.

There is an art to it. This particular coffee maker is no more difficult to use than other similar keg systems, but if you’re going to invest in any system, we recommend being prepared to do some additional research.

This is the only whipper style machine that we found was worth noting and this one certainly deserves to be recognized.

Biggest Drawback: This system works incredibly well at producing barista-quality nitro cold brew, but the main drawback is the capacity. It is essentially a single-use device, capable of neither cold-brewing your coffee nor keeping it fresh over time, but rather only converting it from cold brew to nitro cold brew.

However, if you simply want to be able to enjoy nitro cold brew once in a while, it’s easy to pull this bad boy out and use it here and there.

Most nitro cold brew coffee makers have something of a reputation for being hard to clean. This model, however, gets impressive reviews for specifically being easy to clean.

It is designed to use either N2 or N2O cartridges, though the manufacturer understands the easier accessibility of the N2O and includes instructions for making great quality nitro brew with the less efficient cartridges.

Biggest Drawback: The keg is sadly not insulated, so once your cold brew is made it will need to be stored in the fridge to keep it as cold. However, it won’t go bad at room temperature for a few days.

We’ve talked about cleaning the machines a few times now, and one of the great benefits of this unit is that it comes with cleaning brushes, making it easier to ensure all the stainless steel is scrubbed clean after each use.

The mini keg is also so stylish, you’ll want to keep it on display at all times.

Biggest Drawback: This machine is really designed to work with N2O cartridges, rather than N2. While you can use N2 for better results, it will take 2 cartridges to infuse a single batch, and extra time and energy to ensure you use the cartridges correctly.

Being able to brew your own nitro cold brew at home is a luxury that comes at the cost of time and energy investments.

This brand offers a larger 5L model that allows you to make up to 169 ounces per batch, making it easier and quicker to enjoy more nitro cold brew for longer. There is even a lid provided to keep your brew fresh in the fridge without the wasted space of storing the tap and nozzle.

Biggest Drawback: The biggest drawback to this coffee maker is the relatively unknown brand. VBenlum is a Chinese manufacturer best known for making slushy machines.

This doesn’t necessarily make their nitro cold brew system anything less than amazing, but it does make it harder to judge the historic quality control of the products.

Nitro cold brew is plain black coffee unless otherwise flavored. It is not sweet, though it is generally thought to be less bitter and acidic than traditional hot coffee.

The bitterness mostly depends on the type of coffee used in the brewing process, however, but the texture and smooth creaminess that the nitrogen creates gives the impression of a less bitter brew.

Does Nitro Cold Brew Have Caffeine?

Yes, unless your nitro cold brew is specifically made with decaffeinated coffee, it will have caffeine.

In fact, because cold brew coffee is brewed at lower temperatures than hot coffee, it retains more antioxidants and caffeine than hotter brews.

Every cold brew (with or without nitrogen) will be different, but on average a 16-ounce cup of nitro cold brew will have approximately 280 mg of caffeine, compared to approximately 180 mg in a similarly sized hot coffee.

However, you can always make your cold brew with decaf coffee or by mixing decaf and “regular” caffeinated coffee to make a sort of half-caff cold brew. That is the beauty of making your nitro at home.

A plain nitro cold brew coffee will taste like black coffee, though it is less acidic. The main appeal comes from the creamy, smooth mouthfeel which gives the impression of adding milk while still remaining plain black coffee.

Many people compare the experience of drinking nitro cold brew coffee to that of having a Guinness beer. There is no alcohol in the coffee, of course, but the mouthfeel is very similar.