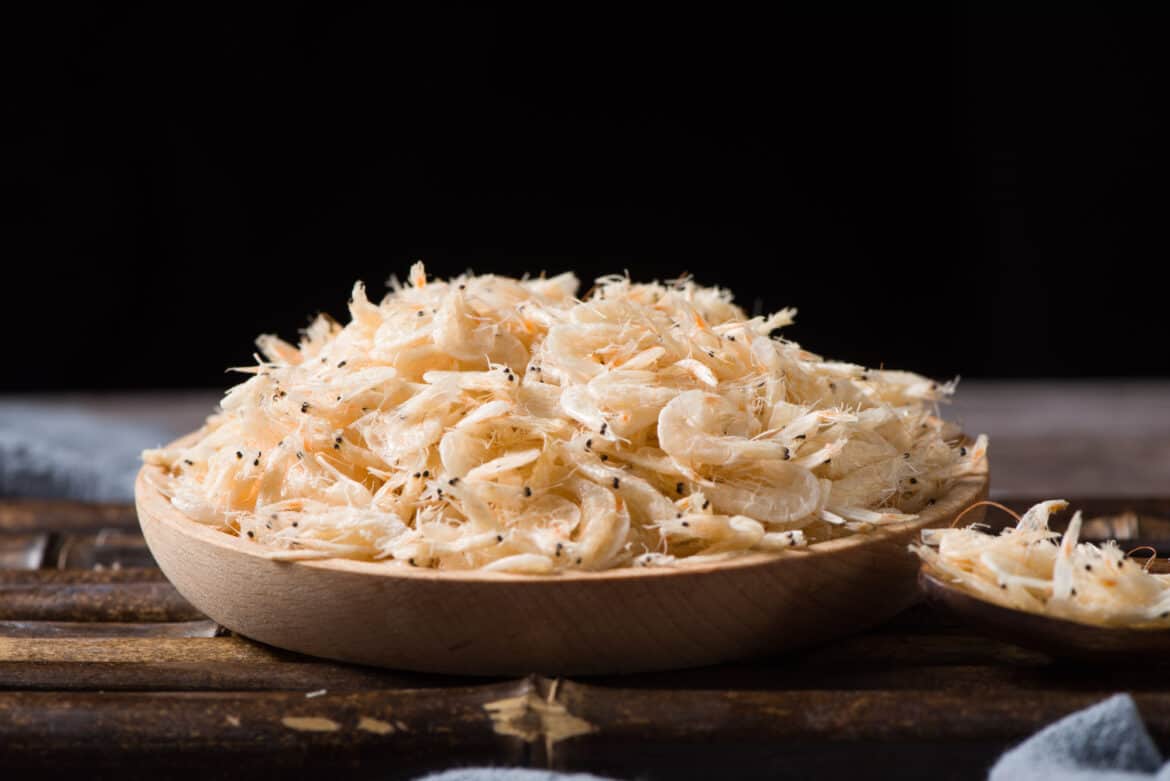 Dried shrimp are a clever way to add a seafood-like flavor to your meal, and this versatile ingredient has long been a staple part of Asian cookery.

Because of their great flavor, dried shrimp are swiftly increasing in popularity around the rest of the world. But what if your local store doesn’t stock this novel ingredient?

Got a recipe that asks for dried shrimp, but you are struggling to source this flavorful ingredient? Don’t panic, these substitutes will make sure your dish still tastes delicious!

Let’s take a look at the best substitutes for dried shrimp and how to use them.

What Are Dried Shrimp?

Dried shrimp are starting to appear more frequently in recipes around the world, but many people may have never come across this unusual product before.

As the name suggests, this flavor-packed ingredient is made by sun-drying fresh shrimp.

This process removes all excess water from this flavorful seafood, causing it to shrink. The result is a tiny dried shrimp with an incredibly intense flavor.

There are three different types of dried shrimp, and hopefully your recipe will specify which type you need. You can get standard-size dried shrimps either shelled or with the shell still on, or tiny shell-on dried shrimp.

Larger dried shrimps are regarded to be of higher quality, but this doesn’t mean you should avoid the smaller version. These also have a great flavor but are just used differently!

Dried shrimp are known by many different names around the world. If you are cooking a recipe that originates from Singapore or Malaysia, you may find them referred to as udang kering.

Although drying shrimp is a way to keep them preserved for longer than fresh shrimp, they will not last indefinitely. You will be able to find them in the refrigerator section in the store, and sometimes as frozen dried shrimp.

Vacuum-packed dried shrimp can keep for up to two months in the refrigerator, but the frozen version will last for far longer than this.

If you’ve gone to the trouble of tracking down some dried shrimp, it makes sense to store any excess in the freezer for future use!

These tiny dried shrimps are best described as tasting like the sea, with added sweetness. This is complemented with the incredible umami flavor, which is intensely savory.

Dried shrimp have a hard, slightly chewy texture. They are often soaked before eating, which makes them softer and less chewy.

When it comes to dried shrimps, a little bit goes a very long way. The flavor is very intense, and a small amount can bring about some big changes to your dish.

How Are Dried Shrimp Used?

They can be used in many different ways depending on the requirements of the recipe.

If used as a flavoring, they are often soaked in liquid and both the dried shrimp and soaking liquid are added to the dish.

For other dishes where the texture of shrimp is desirable, they are used whole or chopped before adding to the dish.

When making traditional Pad Thai, they are pounded with a mallet to soften the texture.

Chinese recipes often use dried shrimp in stir-fries, and they are also added to soups, salads, and dumplings.

In Malaysian cooking, dried shrimps are ground up and used as a seasoning for sauces such as sambal.

And in Vietnam, dried shrimp are used as a crunchy topping, after being chopped and fried.

So now we’ve got you all excited about dried shrimp, we need to turn our thoughts to what you can use as a substitute for this flavorful ingredient.

There are plenty of options available, so don’t be disheartened if you are struggling to source dried shrimp!

Here are our top substitutes for dried shrimp.

If it is the flavor of dried shrimp you are looking for, then the best substitution to use is shrimp paste.

This would be the ideal swap if you’ve got a recipe that asks you to add chopped or ground dried shrimp to a sauce as a flavoring.

Shrimp paste has the same delicate balance of salt and sweet flavors, as well as the highly desirable umami savouriness. And because it is made from fermented prawns, it still has that incredible seafood flavor.

Shrimp paste is saltier and more intensely flavored than dried shrimp, so it would be a good idea to reduce the amount used by half.

It is also not quite as sweet as dried shrimp, so you may need to add a tiny amount of sugar to your recipe.

The great thing about using shrimp paste as a substitute for dried shrimp is that it is readily available in many grocery stores.

If it is the fishy flavor of dried shrimp you’re looking for, then fish sauce makes a good alternative.

Fish sauce is made from fermented fish and can add a great taste of seafood to your dish.

This is a good substitution if you were hoping to use dried shrimp to flavor a broth, soup, or sauce.

Fish sauce does lack the sweetness of dried shrimp, so you may need to add some extra sugar to compensate for this.

It can be substituted on a like-for-like basis, but since fish sauce contains a higher amount of salt, reduce any other added salt accordingly.

If you follow a vegan or vegetarian diet, it can be very hard to find suitable substitutions for ingredients such as dried shrimp.

Dried shrimp brings an incredible flavor to Asian dishes, but this can be re-created with quite an unusual substitution – shiitake mushrooms!

So, if you’re trying to adapt a recipe to make it meat-free, then using fresh shiitake mushrooms could be the answer.

It is better to use fresh mushrooms rather than dried ones as the latter tend to have a strong smell and flavor which will overpower the dish.

Shiitake mushrooms have a great umami flavor, but you may need to add some extra salt and sugar to your dish.

Use around five shiitake mushrooms for every tablespoon of dried shrimp that your recipe calls for.

Katsuobushi is a popular ingredient used in Japanese cooking, and it can be used successfully as a dried shrimp substitute.

If you’ve never heard of it, katsuobushi is made from tuna that has been fermented, smoked, and then dried.

It is then crumbled into delicate flakes that are added to dishes as a seasoning.

In terms of amount, katsuobushi can be used to replace dried shrimp on a like-for-like basis. It has a great umami flavor but is not quite as salty or sweet.

When you want the texture of dried shrimp as well as a similar flavor, dried anchovies make a great substitute.

Anchovies have an intensely fishy flavor, and when dried they have a soft yet chewy texture.

They can be used whole or chopped into smaller pieces. Dried anchovies can also be ground up and added to sauces and dips.

Dried shrimp are often lightly fried and used as a crunchy topping on salads and noodles.

If you’re looking for a vegetarian or vegan-friendly alternative, then some crispy pieces of chopped garlic fried in oil are a good solution!

Remember that garlic can burn very easily, so it should only be fried for a minute or so. Allow it to drain on a piece of kitchen paper, and season it well with salt.

If you leave it to cool thoroughly it should retain its crispiness when added to your dish.

Garlic won’t add any fishy flavor to your recipe, so you might want to use this dried shrimp alternative alongside one of the other suggestions on our list.

Kelp stock is often overlooked when we’re cooking fish dishes, but it can be a great way to add the flavor of the sea to vegan or vegetarian dishes.

Made by soaking dried kelp, kelp stock has a full-bodied flavor, with a hint of sweetness and saltiness.

You can buy pre-prepared kelp stock, but it is also very simple to make yourself using dried kelp.

Although kelp stock has a similar flavor profile to dried shrimp, the texture is very watery so you may need to reduce the amount of other liquid ingredients used to compensate for this.

Can You Eat Shrimp Tails?

The Best Substitutes For Anchovies