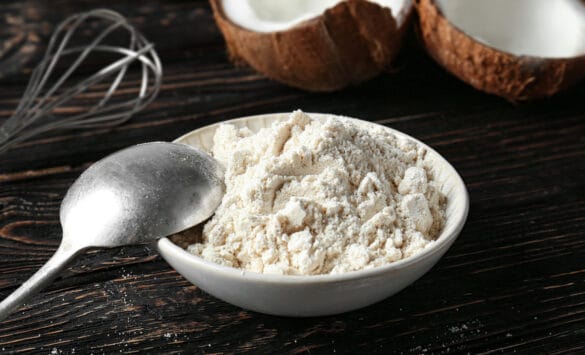 Coconut flour is a good substitute to use in place of wheat flour, especially if you are trying to avoid gluten, or simply if you are looking for a more nutritious flour to use. Coconut flour does offer a lot in terms of fiber and other nutrients, but it also has some downside.

Coconut flour requires more eggs or liquids in a mixture, and it is often difficult to find at your local grocery store, as it is not such a common product yet.

Understanding how well these flours work as substitutes for coconut flour will help to understand which is best for you to use.

Here are the best coconut flour substitutes and all you need to know about them.

Almond flour is your best bet when looking for a coconut flour substitute. It is high in important nutrients such as protein, fiber, and vitamin E.

Almond flour is made completely of ground almonds, which makes it very nutritionally similar to whole almonds.

Much like coconut flour, almond flour is low in carbohydrates and is gluten-free, it also has a low glycemic index which makes it a good option for diabetics.

Just one cup of almond flour is the equivalent of 90 almond nuts, so you are consuming far more almonds using almond flour than you would be eating otherwise.

The downside to almond four is that it is high in omega-6 polyunsaturated fats, which is something you do not want to overconsume in your diet. Almond flour is also fairly expensive compared to coconut flour, so that is something to consider if you are wanting to use it often.

This almond flour is packed in a 3-pound bag, so it will be more than enough to use as a coconut flour substitute.

It is completely gluten-free and is great to use in meals and for baking. It is suitable for both a Keto and Paleo diet.

The almond flour is finely sifted and made with high-quality blanched almonds, for a fine and consistent texture.

Made from California grown almonds, it has a slightly nutty flavor and gives a fluffy texture to recipes, all while providing protein and fiber.

For sweet or savory dishes, this is a great flour to use.

Another great product to use, the Kirkland Signature Almond Flour is made from blanched almonds.

It is superfine, making it perfect for cooking and baking.

It is gluten-free and provides a good source of fiber and protein.

The almond flour is super fine and gluten-free and is Star-K Kosher.

It is 100% natural and is milled down to a super fine powder to suit all baking and cooking needs.

It is gluten-free, grain-free, and dairy-free, making it suitable for many different dietary needs.

Use it as a substitute for coconut flour, or to make some breads, cookies, donuts or even as a coating for vegetables and meat.

Cassava flour is another good option to use as a coconut flour substitute. It is made from the manioc root, which is also called yuca.

It is very fine and dry, and it has a neutral flavor, which helps it work well for many different recipes, whether it be sweet or savory.

You will also need to reduce the amount of liquid used in the recipe, as coconut flour is much more absorbent than cassava flour.

Made from 100% yuca, the Otto’s Naturals Cassava Flour is a single-ingredient, which is completely plant-based.

It is free of all the top 8 allergens, such as grain, dairy, gluten, eggs, soy, and tree nuts, so it is ideal for those who are sensitive to such.

The whole root is used to create the cassava flour, not just the starch extracted from the root. This gives it a more even consistency which is much-needed in many different meals and recipes.

The Iya Foods Premium Cassava Flour is made from one ingredient only, the yucca root, and it is made on the same day the root is harvested, to ensure it remains as nutrient-rich as possible.

It has a creamy white color, which is completely natural, and a neutral aroma and taste, allowing it to fit into most recipes very easily.

Soy flour is made from dried and milled soybean. Just like coconut flour, it contains no gluten and is high in protein.

Soy flour is also lower in carbohydrates than wheat flour, so it works well in that regard as a coconut flour substitute.

The problem with using soy flour as a coconut flour substitute is that is has a bean flavor, which might not work well for some coconut flour recipes.

If you are using soy flour in place of coconut flour, you will need to double the amount of soy flour and increase the number of liquids in the recipe.

The Baker’s Nutri Soy Flour is slightly heat-treated and is perfectly suited to be used in baked goods and cereals, in place of coconut flour and other flours.

It can be used to make cookies, cakes, muffins, and other recipes that call for coconut flour.

It does have a slight bean taste, but it is not too overpowering.

There are two options when choosing rice flour: white or whole-grain. White rice flour is much like white flour, the rice grain is refined to remove most of the fiber, so it has a softer, finer consistency.

Brown rice flour is made from whole grain, much like whole wheat flour. It retains most of the fiber and has a coarser texture than white rice flour. It has a slightly nutty flavor compared to white rice, which has a more neutral taste.

If you don’t have rice flour on hand, read this: The Best Brown Rice Flour Substitutes For Every Use

This premium finely ground brown rice flour is finer than most brown rice flours, so you are able to incorporate it into more recipes while still getting the right amount of protein and fiber.

It is non-GMO and vegan friendly, and being gluten-free, it is a great substitute for coconut flour, and other gluten and grain flours.

Gluten-free, vegan, vegetarian and kosher, the white rice flour from Bob’s Red Mill is perfectly suited to a wide range of diets.

It is manufactured in a dedicated gluten-free facility and has been tested thoroughly to ensure it is completely gluten-free.

The rice is slow ground on a slow-turning quartz mill to ensure it has a fine, even texture for when it is used as a substitute for other flours.

Flax meal is another option to use as a substitute for coconut flour, although it has a very different build-up and nutritional content.

Flax meal can substitute both the coconut flour and the egg in many different recipes. Flax meal contains quite a lot of oil, so it is able to act as both the flour and the fat in a recipe.

It is a great source of protein and of omega-3 fatty acids, which are always great to include in your diet.

To use flax meal in a recipe as a substitute for coconut flour, it is a good idea to mix half flax meal and half almond flour.

But if you want to use flax meal on its own, you need to adjust the recipe quite a bit, as you will be removing eggs and liquids, and using around 3 times more flax meal than coconut flour.

The ground organic flaxseed from Spectrum Essentials has a great nutty taste that suits certain recipes well. It is rich in omega-3 fatty acids and contains no preservatives.

It is USDA certified organic and non-GMO. Each serving of the flaxseed contains 3 grams of dietary fiber for the days recommended intake.

The resealable bag is easy to use and keeps the flaxseed fresh and safely stored.

The only ingredient in this pack is organic ground golden flaxseed. It is USDA certified organic and all-natural, as well as gluten-free.

It provides a good source of fiber, lignans and omega-3 fatty acids.

It has a robust nutty flavor and can make a good substitute for both coconut flour and egg in a recipe.

The flax meal needs to be refrigerated or frozen to ensure an extended product life.

Here is a quick chart on conversions, and how much of another flour you should substitute in for coconut flour in a recipe.

It will be a bit of trial and error at first, but once you get the hang of it, you will easily be able to find the best substitute for coconut flour that suits your needs, tastes and diet best.

Can you use normal flour in place of coconut flour?

Coconut flour is quite tricky to work with, and coconut flour and all-purpose flour do not substitute well for each other in a normal recipe without some significant changes being made to the recipe.

Coconut flour is very absorbent and will need more liquid in the recipe compared to all-purpose flour in a standard recipe.

Is almond flour or coconut flour better for you?

Can you make coconut flour?

You can make your own coconut flour at home.

The Best Substitute For Coconut Flour

Coconut flour is quite a unique flour to cook or bake with, as it is very absorbent. The best alternatives to use are almond flour, cassava flour, soybean flour, rice flour, and flax meal.

The best substitute for coconut flour is almond flour. It is gluten-free, high in protein and low in carbohydrates, much like coconut flour.

Up Next: The Best Flour For Making Banana Bread

How To Store Figs – The Ultimate Guide