Home Foodsguy Atlantic Salmon Vs Pacific Salmon – What’s The Difference?
FoodsguyThis vs That 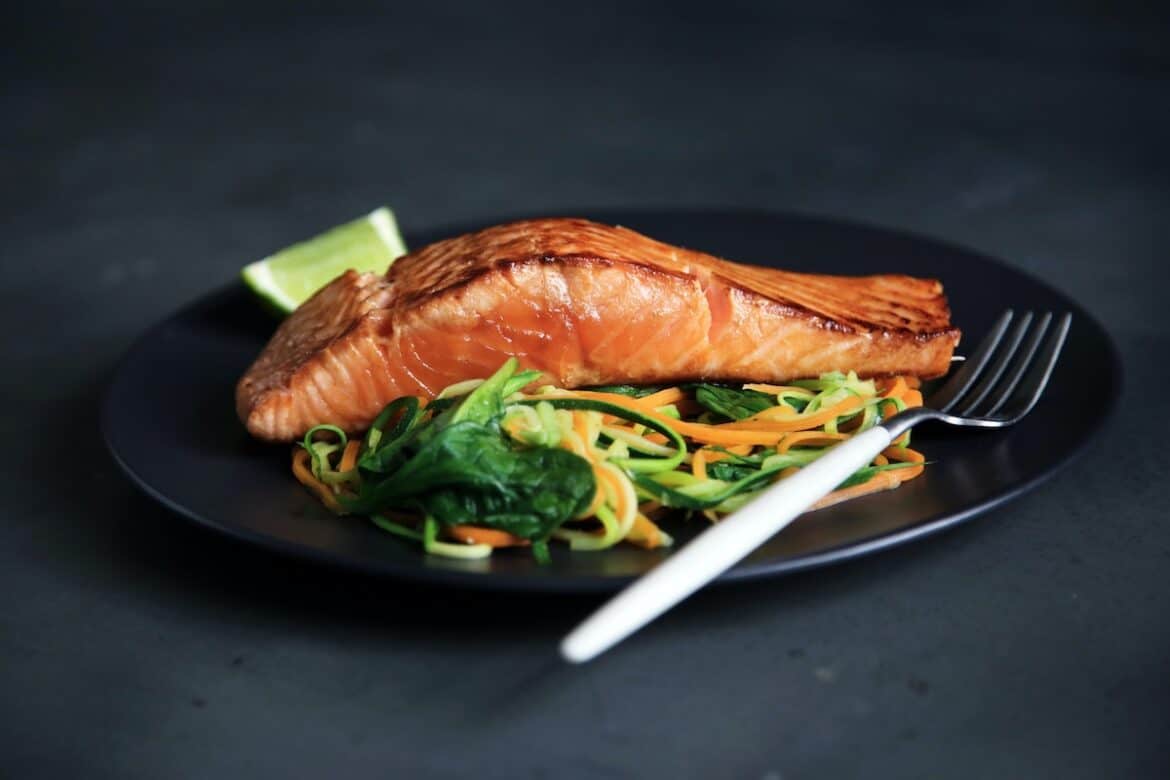 Salmon is salmon, whether it is from the Atlantic or Pacific, right? While that is 100% true, there is a lot more than just geographical location that sets these two types of fish apart.

One of the most popular fish consumed in the US, salmon is a group of fish that belongs to the Salmonidae family.

Rich in Omega-3 fatty acids and several other vital nutrients, it is loved for its sweet yet earthy taste and enjoyed grilled, baked, pan-seared, pan-fried, smoked, on a bagel, with rice, and in sushi.

With several different types of salmon available in the market, it is important to buy the right one since they differ in their taste, texture, nutrition, uses, and costs.

Read on to find out more about Atlantic salmon and Pacific salmon, how they are different from one another, and much more!

Atlantic salmon are born in freshwater streams and, once they grow big enough, they migrate to the Atlantic ocean where they continue living. Pacific Salmon, on the other hand, are usually smaller in size and migrate to the Pacific ocean.

While Atlantic salmon includes only one species, Salmo Salar, Pacific salmon have a total of seven species, five of which live in North American waters.

They are chinook, coho, chum, sockeye, and pink salmon. The remaining two, manu and amago, are found only in Asian waters.

Both species belong to the Salmonidae family but they differ in terms of their genera and lifecycles.

Both types of salmon are anadromous, meaning that they are capable of living in both salt and fresh water.

They are born in fresh water and make their way to the open ocean once they are big enough. When they are ready to breed, they travel back to the freshwater streams to spawn.

The main reason they migrate to the ocean is to grow in size and abundance, with the largest saltwater salmon recorded over 105 pounds in weight and 60 inches in length.

As discussed above, Atlantic and Pacific salmon share a somewhat similar lifestyle but differ in terms of their habitat, size, and appearance. Here are some of the most notable differences between the two:

Atlantic and Pacific salmon look quite similar and are a bright, silvery color as long as they dwell in saltwater. However, once they enter freshwater, their appearance changes drastically, making them very different from one another.

While they retain their brightly colored silver bodies at the beginning of their freshwater journey, they soon start to become darker and switch to a brown, red, green, or blackish color.

Once they undergo these changes, it is easier to tell them apart. The colors depend on the type of salmon and the depth, turbidity, and light intensity underwater.

Both Atlantic and Pacific salmon have similar lifestyles of being born in freshwater, migrating towards the ocean when mature, and coming back to spawn, however, the former has a slightly longer lifespan than the latter.

While Pacific salmon (chinook salmon) live on average for up to 3-7 years, Atlantic salmon live slightly longer for 5-8 years. While this difference is pretty minimal, it is a difference nonetheless.

When it comes to the taste and texture of the two types of fish, the differences are very minimal and it would take a refined palate to be able to tell them apart.

Atlantic salmon is much milder tasting, has firmer flesh, and large flakes as compared to Pacific salmon, which tends to be more tender with smaller flakes.

Chinook salmon, also called King salmon, is considered to be the most delicious out of all the different types. It has a high-fat content and rich flesh that ranges from white to a deep red color.

Coho salmon, also called Silver salmon due to its especially silver skin, has a bright red flesh and a delicate texture as compared to Chinook. Both, however, have a similar flavor.

Pink salmon, also called Humpback salmon due to the distinctive hump that it develops on its back when it spawns, has a light-colored flesh that is flavorful and lower in fat content.

It is one of the most common species of Pacific salmon and is sold canned, fresh, frozen, and smoked.

Red salmon, or Sockeye salmon, gets its name due to its dark-colored flesh and because it turns red as it moves upstream to spawn. It is noted for its bright red-orange flesh and deep rich flavor.

As far as nutrition and health benefits are concerned, both Atlantic and Pacific salmon are rich in protein and omega-3 fatty acids. They are also packed with plenty of vitamins and minerals.

Here is a comparison of 4 ounces of Atlantic salmon and Pacific salmon with regard to their nutritional value:

Now that you know the differences between Atlantic salmon and Pacific salmon, here are a few additional questions we thought you might have:

Can you substitute Pacific salmon with Atlantic salmon?

Atlantic salmon and Pacific salmon taste very much alike, and unless you are a food connoisseur, you won’t be able to tell them apart.

That being said, when you run out of Pacific salmon in your local grocery store, can you substitute it with Atlantic salmon and vice versa?

Yes, although the two types of salmon have slightly different tastes and textures, you can easily substitute them with each other and can cook them using the same methods such as pan-frying, poaching, baking, and searing.

What type of salmon is used for sushi?

Most restaurants in North America and Japan use chinook, chum, and sockeye salmon for making sushi, while restaurants in Europe will only use farmed Atlantic salmon.

When making sushi at home, buy high-quality, fresh fish from a trusted source and make sure it is frozen. Also, make sure that it is sushi-grade and safe for consumption.

The best salmon for sushi should be bright pink in color and firm to the touch with no signs of browning. If it has a greyish color, it means that it has gone bad and is not suitable for consumption.

What is the difference between wild-caught salmon and farmed salmon?

Salmon farming began as an attempt to overcome the shortage in wild salmon stock due to environmental factors and overfishing.

It is now recognized as a tool for producing healthy and nutritious salmon to meet the ever-increasing demand for this delicious fish.

Farmed salmon boasts a higher fat content and omega-3s, and also has 46% more calories than wild salmon, which is richer in minerals such as potassium, iron, and zinc.

When it comes to the taste, some say that farmed salmon tastes better while others believe that wild-caught salmon is always more flavorful.

Since farmed salmon can be harvested all year round, its prices are generally lower than wild salmon, which is available during certain months of the year only.

If you’re interested in trying out some new and fun ways to cook salmon, check out this video from the folks over at Bon Appétit!

Up Next: How To Broil T-Bone Steak

How To Broil T-Bone Steak