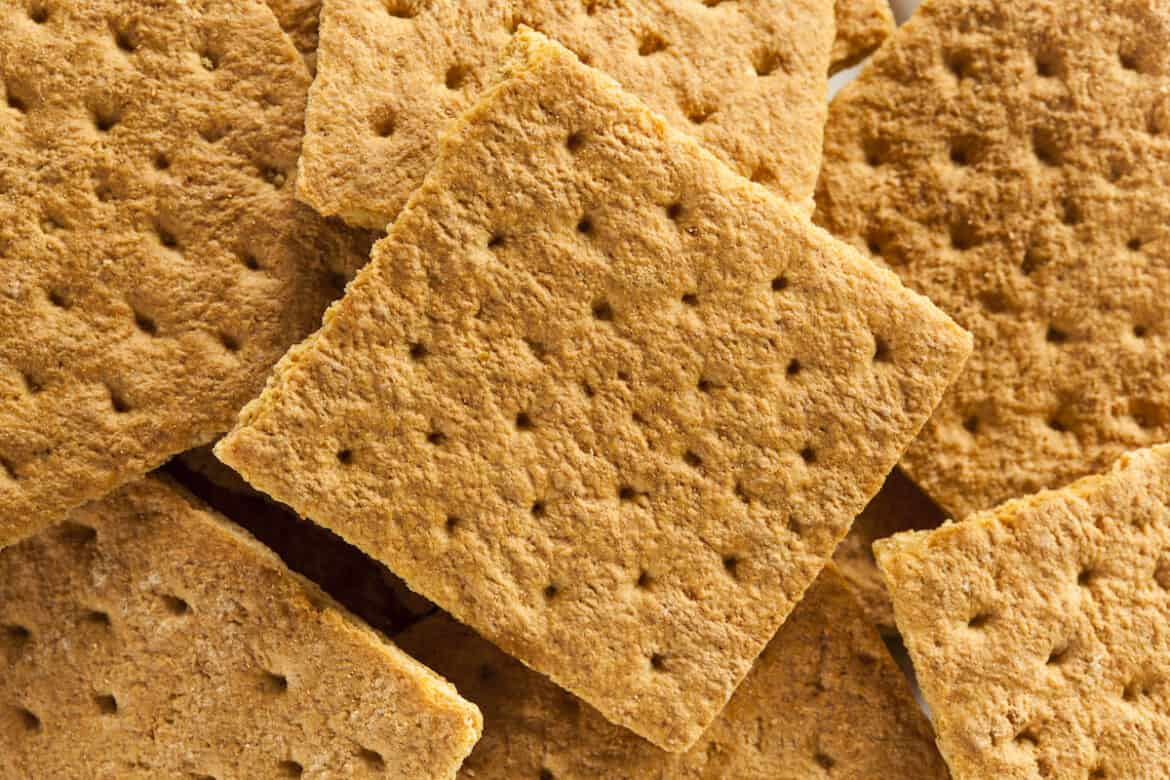 Graham crackers are sweet (but not too sweet) crackers made with graham flour that are mostly eaten as a snack food or used as an ingredient in some recipes.

They come in different varieties such as cinnamon, chocolate, and honey flavors, and have been around for a long time, originating in the United States in the mid-19th century.

They are reminiscent of our childhood days and can be eaten as is, dunked in milk for a fun and mushy teatime snack, made into s’mores, or enjoyed with peanut butter or applesauce.

Graham crackers are also a great ingredient for baking and pair well with classic dessert flavors such as chocolate and peanut butter.

When ground into crumbs, they can be used as a crust for pies, cheesecakes, and other no-bake desserts, and can also be substituted for flour in many recipes.

Graham crackers are made with wholesome ingredients and are low in calories and high in fiber. However, for their serving size, they are high in carbs and sugar and must be eaten in moderation.

With the growing acceptance and adoption of veganism, one of the most common questions asked about graham crackers is whether they are vegan or not.

Read on to find out what graham crackers are made of, the vegan graham cracker brands available in the market, those that are not vegan, and much more:

Graham crackers come in different varieties and are made by several companies using different types of ingredients.

While most of the key ingredients remain the same, they use a few additional ones to differentiate their product from the rest.

A typical graham cracker may include the following ingredients:

Out of this list of ingredients, there are 3 in particular that are not, or may not be vegan foods. Honey is the most obvious ingredient and any graham cracker containing honey is clearly not vegan.

The second ingredient is sugar, and it is a rather controversial one. Though sugar is a vegan product in itself, it is often processed using bone char made with animal bones, which is, for obvious reasons, non-vegan.

Most companies use this sugar and, although these particles are not present in the refined sugar, it comes down to your personal preference and whether it’s acceptable to you or not.

The third questionable ingredient is natural flavoring, which may or may not be derived from plants or animals, and may not be vegan unless stated otherwise.

Graham crackers have always been known to have honey in them, and since vegans have a strict stance against any form of animal exploitation including bees, they avoid honey and any foods that use them.

While many brands use non-vegan products such as honey, there are many out there that are branching out to make vegan-friendly versions of their beloved products.

Finding vegan-friendly graham crackers has become relatively easy now. Here are some of the most popular vegan graham cracker brands:

Nabisco Original Graham Crackers are honey-free and 100% vegan. In addition to being vegan-friendly, they are also considered a healthy snack since they have no cholesterol and are low-fat.

You can enjoy these delicious crackers without worrying about your health and also keeping your conscience clear about not consuming any products that harm or exploit animals.

Keebler is a popular snack brand that produces a variety of graham crackers for both vegans and non-vegans.

They are sweeter than Nabisco’s original graham crackers and serve as a delicious base for your desserts.

They are also a great option to satisfy your sugar cravings, with just the right amount of sweetness that is neither too less nor is too overpowering.

Apart from Keebler’s Original Graham Crackers, they have other varieties that are also vegan that include the Cinnamon, Low Fat Cinnamon, and Keebler Chocolate Elf Grahams.

In addition to that, their Ready Pie Crust is also vegan-friendly and loved by vegans all over the country.

Nairn’s Gluten-free Oat Graham Crackers are a great option for both vegans and those on a gluten-free diet.

In addition to being vegan and 100% gluten-free, they are also considered a healthy snack with essential nutrients such as complex carbs and soluble and insoluble fibers.

Note: they may contain traces of milk, tree nuts, and peanuts, and may not be suitable for you if you are allergic to the protein avenin.

Their S’moreables Graham Style Crackers are one of their most popular products that are gluten-free, vegan-friendly, and also dairy-free, but may contain eggs through cross-contamination.

Note: Palm oil is considered to be a non-vegan ingredient among many vegans since its extraction contributes to the exploitation of nature and animals, causing them a lot of pain.

For a fun take on graham crackers, you can try Nabisco’s Teddy Grahams that are shaped like teddy bears and come in delicious chocolate, cinnamon, and chocolate-chip flavors – all of which are vegan-friendly.

Their most popular flavor – honey – is not vegan and must be avoided. However, you may opt for the others for a delicious bee-friendly treat.

Here are a few other vegan graham crackers to give you added options if you are on the lookout for good vegan snacks:

It shouldn’t come as a surprise when we tell you that most of the graham cracker brands available in the market are not vegan-friendly.

If you are a vegan, it is very important to check the list of ingredients of the products you are purchasing, especially when it comes to graham crackers, since almost all of them contain honey.

Here is a list of some of the most popular non-vegan graham cracker brands available in the market:

Honey Maid is one of the most popular graham cracker brands in the United States that are available in different flavors such as Original, Low Fat, Cinnamon, and Chocolate.

Sadly, none of them are vegan-friendly since they all contain real honey.

Annie’s Homegrown is another popular graham cracker brand that makes different varieties of the delicious snack.

While a few of their varieties are vegan-friendly, their Organic Honey Grahams are not since they contain organic honey.

It might be important to note that they are made using the same equipment that processes milk and soy products, therefore, people will allergies must take note.

Market Pantry’s Honey Graham Crackers contain real honey and are not vegan-friendly. They are also processed using the same equipment that handles eggs and milk, therefore, people with allergies must take note and avoid them.

Although there are quite a few vegan-friendly graham cracker options available in the market, if for some reason you do not wish to opt for them or if they are not available, what can you do?

Are there any vegan substitutes for graham crackers? Yes, there are! And you’d be surprised to know how easily they can be found in almost all supermarkets and how delicious they are.

Some of the best vegan cookie substitutes for graham crackers include:

Oreos are one of the most popular cookies in the world and are available everywhere, even if you are in the middle of nowhere.

What’s great is that they are vegan-friendly, albeit by accident, but, shoot, they sure are vegan.

Instead of using graham crackers for s’mores, try Oreos (S’moreos) and thank us later. They also make a perfect crust for cakes and pies.

These cookies can easily be found in the gluten-free and vegan section of most grocery stores and supermarkets, and are an excellent vegan choice with allergy-friendly ingredients.

All Eat Pastry products are 100% vegan and are great substitutes for graham crackers, especially their chocolate chip cookie dough.

You can eat them raw or bake a delicious batch of cookies at home to be eaten as is or as a base for your desserts.

How to Make Vegan Graham Crackers at Home

For times when you don’t want to rely on store-bought vegan graham crackers, you can wear your apron and chef’s hat and make some at home.

They are super easy to make, can be baked in just a few minutes, and what’s best is that you know exactly what ingredients are going in them.

There is a little waiting time involved in the process where you have to let the dough rest in the fridge for an hour before you can roll it out and bake it.

You can also make the dough one day in advance and bake your vegan graham crackers the following day.

Here are a few related questions to graham crackers and whether they are okay to be consumed by vegetarians, those with gluten allergies, and others!

All graham crackers are not vegan, but they are almost always vegetarian. Vegetarians only exclude meat from their diets but are okay with consuming foods from animals such as eggs, milk, and honey.

Since graham crackers don’t usually contain actual animal meat in them, it is safe to assume that they are vegetarian-safe.

While you are not very likely to come across non-vegetarian graham crackers, it shouldn’t hurt to check the ingredients list since some flavored crackers may use natural flavors that may or may not contain meat.

Therefore, to be on the safe side, if it is not clearly stated, it is best to steer clear of graham crackers with natural flavors in them. You may also contact the company and ask them for this information.

Although there are gluten-free graham cracker brands available in the market, they are very few and difficult to find. A few of the options include Pamela’s and Kinnikinnick, and of course, you can always make some for yourself at home.

Also, some may include natural flavors, that may or may not contain meat, which may be against basic kosher dietary laws.

There are certain brands, though, that make kosher graham crackers such as Lieber’s Kosher Honey Graham Crackers.